Lifeguard by Arthur Byron Cover:A sharp diamond of a story told in the first-person and saying what needs to be said about youth’s expiring ambitions, the narrow horizon of small town life, summertime, pot, and an uncanny will-o-the-wisp.

Anime (Walker’s Retreat): Where have I seen this before? Oh, only with the Star Wars, Star Trek, Doctor Who, Marvel, DC, Biohazard/Resident Evil, The Last of Us, and so many other Western corporate properties. There are two key differences between what’s going on with anime and what’s going on with Western entertainment. The first is that the Death Cult doesn’t run Japan’s culture industry, not the way it is in the West. The second is that the entertainment corporations don’t outright hate their customers. So, instead of esoteric Molech worship we have the (by comparison) easier problem of a Brand Fan problem.

Comic Books (Dark Worlds Quarterly): 1975 was the new Golden Age of dinosaur comics with Joe Kubert leading the pack. By some strange coincidence all the dinosaur/jungle guys had names that started with a T (Tarzan, Turok, Tragg) or a K (Korg and Kong). So Tragg and the Sky-Gods, Korg 70,000 BC and Kong the Untamed made their dino comic cover debuts. Skull the Slayer had dinos but not for long. It got weirder with more UFO stuff. Valley of the Dinosaurs was based on a Hanna-Barbera cartoon and like The Land of the Lost (1974-1976) (which didn’t have a comic) was Saturday Morning pandering to the dino lovers.

D&D (Tao DND): The Higher Path of D&D, the one beyond merely killing things and taking away their treasure, is the human experience of pitting Self against that which we do not think should be.  Not my self.  The Player’s Self.  The players are entitled to fight for those causes they want to fight for.  I won’t tell them how to do that; I won’t shame them into fighting for causes I think are right and noble; I won’t clear the road for them.  I won’t judge them for their choices.  I won’t encourage them to believe what I believe and I won’t punish them when they don’t.

Fiction (DMR Books): When you think of literary thieves, who do you think 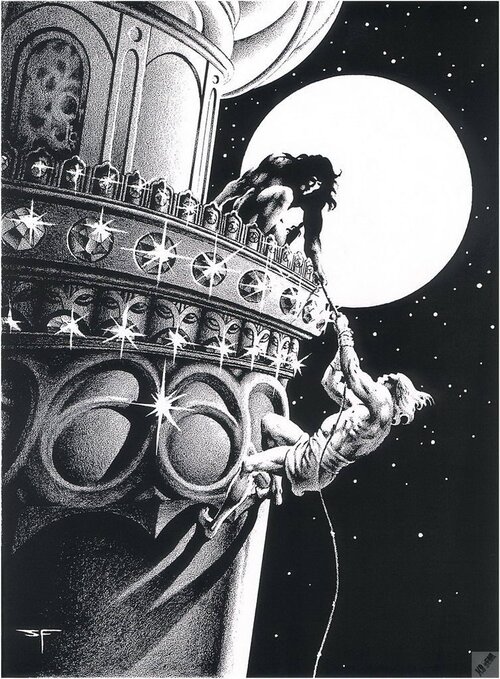 of? Maurice Le Blanc’s sly gentleman thief Arsene Lupin? Richard Stark’s harden, professional Parker? Yet, aside from the crime genre, thievery as an occupation appears most often in sword and sorcery. Thieves as protagonists have a long history in sword and sorcery. This trope probably began in mythology and legend. Prometheus stole fire from the gods. Robin Hood stole from the rich and gave to the poor. In High Fantasy, Bilbo Baggins was recruited to burgle a dragon. So let’s look at their fictional heritage.

Writing (John C. Wright): For every C.S. Lewis, J.R.R. Tolkien, Cordwainer Smith, Gene Wolfe, Walter M. Miller, or Orson Scott Card writing from a Christian perspective, one can list ten men of heathen or secular perspective lauded with the greatest fame our genre can bestow. Instead of Gene Roddenberry making stories to say men cannot be free in utopia or George Lucas saying men must fight their dark side, we now have Kathleen Kennedy and Rian Johnson making stories to say free men are toxic, and that the fight is pointless, for the light offers no more answers than the darkness.

Interview (Superversive SF): Today, we have a treat! An interview with Brian Niemeier, author of Don’t Give Money to People Who Hate You in which he talks about how he came to write this surprise breakout book. 1. How did you come to write this book?

I almost didn’t. My dispositions have always run toward writing fiction, so I initially resisted tackling nonfiction. It was only when several friends, family members, and readers urged me to collect my thoughts on the culture war in a book that I relented.

Pulp Magazines (Don Herron): In Chapter 2 of the 1943 serial Batman — “The Bat’s Cave” — Bruce Wayne’s butler Alfred wiles away the time reading the October 1940 issue of Spicy Detective. The “spicy” element should be obvious from the cover art—and from the prim Alfred’s startled expression. The content of the stories lived up to the lascivious suggestion of the cover. But only just.

Horror (Too Much Horror Fiction): When it comes to pulp horror fiction, I

don’t think there’s any doubt that “Slime” is one of the perfect gems of the style. Originally published in a 1953 issue of the venerated magazine “Weird Tales,” Joseph Payne Brennan’s 30-odd page tale is rife with all the weaknesses and all the glories of pulp horror in full flower. Brennan overuses words and phrases (“hood of horror” and “black mantle”), utilizes some weak analogies (alien as… some wild planet in a distant galaxy), and his country dialogue makes “Hee-Haw” sound like Olivier reciting the Bard.

Westerns (Western Fiction Review): This time, the author behind the pseudonym of Tabor Evans is James Reasoner and he provides us with a

cracking tale. The action comes thick and fast as Longarm searches for the long missing army payroll. From the word go someone is out to stop Longarm getting to Sweetwater Canyon but he battles through. Once there Longarm finds himself in a range war and the canyon is part of the land being fought for.

Cinema (New Iron Age Blogspot): Released in 1982, this movie was a complete flop and only became well-known, and something of a cult classic, when it became ubiquitous on cable throughout the 80s. To

kids of my generation, this was one of their early experiences with Sword & Sorcery, and maybe the very first. It established in a lot of kid’s minds what the genre was supposed to be, and it still inspires a lot of affection to this day.

D&D (Dungeon Fantastic): What I like about the systems I’d consider: AD&D – Power level. I like the HP levels. I have a strong dislike for d4 HP thieves and I like d10 fighters better than d8 fighters. – Cleric spells. I like clerics getting spells at level 1, and bonuses for Wisdom are fine with me. I get why from a world-building standpoint the vast majority of clerics being level 1 and not getting spells makes PCs quickly become special . . . but I’d rather have them start with a spell. – I like AC starting at 10, not 9 (but see below.)

Hugos (Emperor Ponders): Some particular trends in genre literature have become obvious during the past few years. One of them is the use of Brobdingnagian titles, a compulsion to write paragraph-long titles, some of whom even give away the plot. I suspect this may have started as a quirky, ironic thing to do, but I don’t think it’s funny unless you are lampooning or referencing some stuffy style like academic papers or writing comedy. And, to be fair, that’s to some extent what this story is doing—referencing, not the comedy.

Anthology (Science fiction fantasy blogspot): Beyond Time: Classic Tales of Time Unwound, edited by Mike Ashley This is one of a number of anthologies in the Science Fiction Classics series published by the British Library, this one (as you may have guessed) dealing with time travel. As usual in this series, there is a long introduction by the editor, supplemented by biographical notes on the authors at the start of each story.

RPG (Grey Hawk Grognard): The thing to remember first in a Greyhawk-setting mass combat is that the AD&D rules are geared towards small, skirmish-level actions. In other words, melee with a small party of adventurers and a relatively small group of enemies and/or monsters. This scale is reflected in the spells, such as animate dead (there’s really no way to have a literal army of skeletons unless you have hundreds of 5th level clerics or 9th level magic-users) and even mass invisibility requires a 14th level magic-user, and such are exceedingly rare in the World of Greyhawk.

History (Didact’s Reach): Legends were forged on that day, such as that of “The Boys of Pointe du Hoc”. Heroes fought to the bitter end, on both sides. Germans opened the gates of Hell itself upon the Allied infantrymen wading ashore through the pounding surf of Omaha Beach, raining shot and shell down on them. Americans and Canadians and British and New Zealanders and many others bayoneted, grenaded, shot, clubbed, and mauled their German opponents to their gruesome deaths.

Pulp Fiction (Rough Edges): Of the many, many series written for the pulps 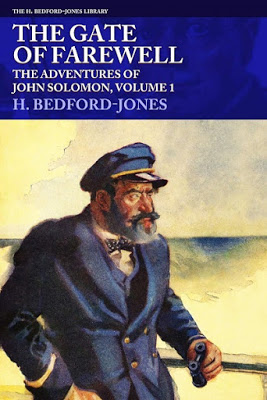 by H. Bedford-Jones, his longest-running featured a fat little Cockney named John Solomon, which ran from 1914 to 1936 and encompassed more than twenty novels and novellas. John Solomon may not seem very impressive at first glance, but he actually runs a far-flung intelligence network and makes a specialty of thwarting all sorts of criminal and espionage schemes around the world. I’ve been aware of this series for years but hadn’t read any of them until recently, when I started at the most logical place, the novel THE GATE OF FAREWELL, which was published originally as a serial in ARGOSY in 1914 and is Solomon’s first appearance.