Science Fiction (DMR Books): First off, I have to say that Call Me Joe is a 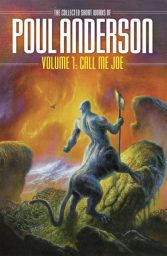 fine book, production-wise. I’d heard a few rumors that maybe NESFA books weren’t of particularly high quality. My copy of Call Me Joe certainly is. The covers, paper, binding, dustjacket–all are quite satisfactory. This book should last my entire lifetime and then some. Secondly, this hefty tome runs to over five hundred pages and contains almost thirty stories–plus poems–by Anderson. I do not have an overabundance of time this evening, so I will only be hitting the highlights as I see them.

Cinema (Frontier Partisans): It’s probably nothing to be proud of, but I 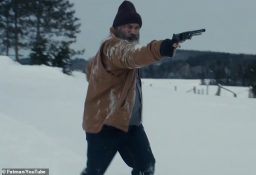 think I’m the target audience for this movie. Mel Gibson has given himself over to the batshit crazy, high-mileage true wild man that he is. Yes, the Fatman is Chris Cringle. Santa Claus. And Boyd Crowder Walt Goggins Skinny Man is hunting him in a film the creators describe as: “A superhero film wrapped in a thriller dipped in Western and sprinkled with satire.” Yeah, of course I’m in. Especially given the fact that Santa packs a Walker Colt. Yes, he does.

Lovecraft (Tentaculii): A Patreon patron has sent in a question for me: “What did Lovecraft write or say about Christmas? There’s the short story “The Festival,” of course. Anything else? Did he ever comment on a connection between Christmas and ghosts, beyond the observation that M.R. James read many of his tales to the boys at Eton at Christmastime?”

Review (Talking Pulp): I’ve always loved that H.P. Lovecraft never really gave a shit that other writers would tap into his Cthulhu mythos. In the case of Robert E. Howard, the two had become good friends whose work influenced each other. So, naturally Howard wrote some Lovecraftian tales and even merged some of his most famous characters with those existing in Lovecraft’s literary universe. The first story in this anthology collection sees Howard’s Kull of Atlantis crossover into Lovecraftian horror. Granted, this also happened in some works featuring Conan the Cimmerian, as well.

Review (DMR Books): To begin with, Barbarian Life: Volume One covers all 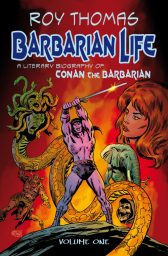 of the issues of Marvel’s Conan the Barbarian from #1 to #51, along with all the dramatic twists and turns that led up to that first issue getting published. There is an intro by Roy Thomas and then RT devotes one chapter to each issue. Those chapters are crammed with inside info that Roy merely hinted at in various other essays for Marvel and Dark Horse.

RPG (Grognardia): Robert E. Howard’s Conan the Cimmerian and Dungeons & Dragons have been connected since the beginning. Volume III of 1974’s 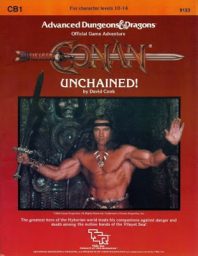 OD&D makes explicit reference to him in the section describing the “Angry Villager Rule,” for example, while 1976’s Gods, Demigods & Heroes includes one interpretation of his game statistics. Gary Gygax offered up a different interpretation of the character in issue #36 of Dragon (April 1980).

Science Fiction (Wasteland & Sky): For those unaware, the Planetary Anthology series has been one in the works for years. Starting at Superversive Press before they closed up shop, it was then 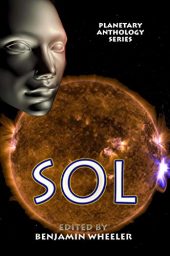 picked up by Tuscany Bay Press who have spent 2019 and 2020 breaking their backs to get them out and completed. The idea was to create an anthology series of short stories based around each of the classic planets in our system. Each volume has a different editor with different authors aboard, so you can imagine how much effort it would take to coordinate that.

Games (Heavy Metal): Science fiction and fantasy artist Mark Zug was in the early days of his career when he got a dream assignment — painting characters from Frank Herbert’s Dune for a card game based on the sci-fi masterwork. With interest in Dune again high (due to the now-delayed movie version directed by Denis Villeneuve), it’s a good time to get the story behind these fantastic paintings. For more of the artist’s work, visit markzug.com. When did you personally discover Dune, and what did it mean to you?

Weird Tales (Scott Nicolay): This week the author of our featured selection 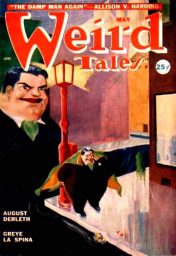 is another mysterious byline from Weird Tales. Allison V. Harding was not only the magazine’s most prolific contributing female author: she was its tenth most prolific contributor altogether, well ahead of many of the magazine’s better known male authors such as Ray Bradbury or Frank Belknap Long. And though we know much more about Harding than Mildred Johnson, she remains in many ways even more enigmatic. She may in fact be The Unique Magazine’s most enigmatic author of all, and its most enduring mystery. 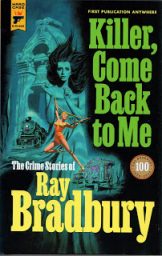 celebrates Ray Bradbury’s centennial. This book collects 20 of Ray Bradbury’s crime stories, some of which have rarely been reprinted. Bradbury’s crime stories are not easy to come by. Originally published in the pulp magazines, these 20 stories offer a range of stylistic approaches to their subject matter. This is a good collection, but far from the best. These stories represent Bradbury’s developing talent as a narrative stylist. I enjoyed re-reading those stories I’ve read before, and I enjoyed getting acquainted with a few I was unfamiliar with.

Fiction (Mostly Old Books): A hard-boiled seafaring adventure tale telling the story of Brian Hart, a WW2 vet who finds a lucrative and exciting career as a smuggler in the Spanish Mediterranean after coming back from the war – very dangerous and highly illegal work. Hart navigates through storms, naval police raids, beatings, and double crosses while trying to keep his hot-blooded Spanish girlfriend satisfied, especially after her father is murdered and she blames him.

Crime Fiction (Easily Distracted): Detective stories – in place of unreliable narrators – have unreliable clients. The Op. quickly discovers his new client is a swindler of swindlers, a bond merchant clipping coupons not his own. The most dynamic element in it however is a closely narrated fight at night in a pitch black basement. ….Zumwalt’s house was a two-story, semi-detached one; and the lock on the front door held me up about four minutes. A burglar would have gone through it without checking his stride. This breaking into the house wasn’t exactly according to the rules, but on the other hand, I was legally Zumwalt’s agent until I discontinued work that night—so this crashing in couldn’t be considered illegal.

Pulps (Dark Worlds Quarterly): 10 Story Fantasy appeared in Spring 1951. It was edited by Donald A. Wolheim, an editor who experimented with Science Fiction and Fantasy in various formats. Before this one-shot magazine, he had tried Out of This World Adventures, a mix of Pulp and comic book. He also had the small magazine Avon Fantasy Reader running concurrently.

RPG (Pits Perilous): Talk about those crappy, amateur rulebooks from the 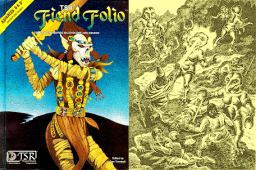 1970s, and OD&D springs immediately to mind.  And how could it not?  Take a look; it speaks for itself.  But as the game grew in popularity, it was clear a better edition was called for.  Enter Advanced Dungeons & Dragons (or AD&D for the uninitiated).  Starting with the Monster Manual, which created quite a stir among my nascent circle of gaming friends, onward through the Player’s Handbook and the ever-useful Dungeon Master’s Guide, it earned some well-deserved respect…

Interview (Pulpfest): Prolific and popular author Will Murray has written 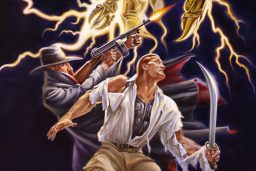 extensively about Lester Dent’s Doc Savage, both officially licensed novels and articles about the hero. Will first discovered The Man of Bronze when he was fifteen and spotted THE DUST OF DEATH on a spinner rack. He began collecting pulp originals soon thereafter and started writing for fanzines, specifically about Doc Savage. In this interview, we do a deep dive with Will on his wide-ranging career as a pulp author.

Cinema (Kairos): I recently re-watched Gremlins, and it struck me as a perfect example of David Stewart’s IP explosion phase. Shot on a shoestring budget from B movie material not even the director believed in, it became the fourth biggest film of 1984. What’s even more amazing is that according to the rules, there’s no way Gremlins should have been a hit. The film makers somehow managed to cram nearly every screenwriting mistake in the book into the first act.

Jack London (Tentaculii): As many pulp historians will know there was quite a crop of such stone-age books and stories during this period, and from many of the leading writers. Late in the day R.E. Howard broke into print with such a tale, “Spear and Fang”, and Lovecraft remarks that Howard was a perceptive admirer of Jack London. But melodramatic grunt n’ weep Stone Age tales have never been something that’s greatly appealed to me, and I guess I prefer a mix of the specific and a grand sweep of history.

RPG (The Alexandrian): Over the past couple decades, a design concept that has become fairly entrenched in D&D culture is that the PCs need to face X encounters of Y difficulty per day. The general idea being that the game is balanced (either intentionally or unintentionally) around their resources being chewed up across multiple encounters: If they face fewer encounters, there’s no challenge because (a) they will still have lots of resources left at the end of the day (thus suffering no risk) and/or (b) they burn up LOTS of resources per encounter (making those encounters too easy).

Tolkien (Grognardia): When I discovered Tolkien, I was probably more entranced by appendices E and F, which discussed the languages of Middle-earth than by the story of The Lord of the Rings (The Silmarillion was, in this respect, even more impressive). Then came several articles in Dragon that offered advice on the creation of languages for one’s campaign setting and I disappeared down a philological rabbit hole from which I never emerged (thanks, in no small part, to learning Latin, French, and Classical Greek in school). 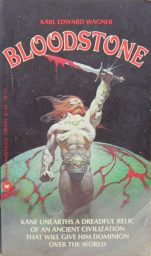 Bloodstone and its immortal protagonist Kane in 1960, while just a freshman in high school. It was five years after the hardcover publication of J.R.R. Tolkien’s The Return of the King (1955), and five years prior to the unauthorized but widely circulated Ace paperbacks that would catapult the work into pop culture ubiquity. Wagner finished the draft of Bloodstone in 1970 while enrolled as a PhD student in neurobiology. By then, Tolkien was everywhere—including, as I argue, in the published version of Wagner’s 1975 novel.