Fiction (Mighty Thor Jrs) The Broken Sword–– “Originally published in 1954 this novel has all the elements necessary for great heroic fantasy. A unknowing or unwilling hero, a villain of unspeakable vileness, epic battles of world changing proportions, and of course a magic sword! With some 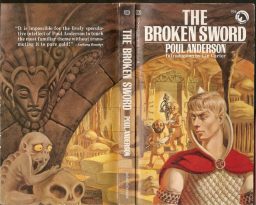 Norse mythology mixed in what is not to love. When I think Definitive Heroic Fantasy I think of this book, so I had to do a post on this book first.”

Fiction (Black Gate) Savage Pellucidar:–– “I’ve told this tale before with Escape on Venus and Llana of Gathol, the sister works of Savage Pellucidar, but once more won’t hurt. At the start of the 1940s, Edgar Rice Burroughs experimented writing novels in three of his settings — Mars, Venus, and Pellucidar — as sets of four linked novellas. Each novella was capable of standing on its own but could later fit together with the other three for book publication. The idea may have been the suggestion of Cyril Ralph Rothmund, business manager for ERB Inc., who first wrote a letter to the editor of Ziff-Davis Magazines with the format proposal. It was an experiment of necessity, since the pulps were turning away from serializations as more of the weekly magazines dropped to monthly publication. Burroughs approached the three books as a round-robin, changing from one setting to the next to finish all the novellas.”

RPG (Playing at the Word) Slain Any Wicked Dragons Lately?–– “This D&D advertisement dates from the first half of 1977, a stopping point when TSR 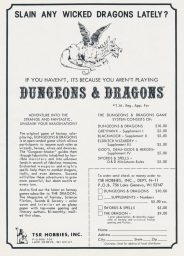 would release no new material for the original Dungeons & Dragons game and hadn’t yet put anything out to replace it. The body text is familiar from other contemporary advertisements, but the form given shown here let you order a white box, all the supplements, a Swords & Spells, and a subscription to bi-monthly The Dragon magazine. The cover of that magazine’s first issue supplied the slayable fellow shown at the top.”

Fiction (Tellers of Weird Tales) 11/22/63 and the Conspiracies of History–– “The novel 11/22/63 is about a man who travels back in time to try to prevent the assassination of John F. Kennedy. It’s a really intriguing concept, and in the first third of the novel, I was following right along and didn’t want to put it down. You might be daunted by 849 pages of novel, but King is no Thomas Wolfe, and his book reads pretty easily. Too easily, I would say, and that’s my first complaint. I have never been a big fan of Stephen King.” 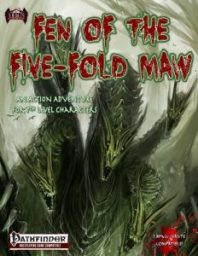 Games (Ten Foot Pole) Fen of the Five-Fold Maw–– “So, yeah, obviously it’s overly verbose. Lone read-aloud. Long DM text. Mega long stat blocks. Lots of backstory and history that are irrelevant. The first encounter, an ambush on the road, takes seven pages. For a simple combat with some lizardmen and their pet frogomoth.”

Publishing (Skelos) Issue 2 Ebooks are Ready and Preview of Issue 3–– “Fellow Skelo-Tens! This is an update that is a long time coming. As many of you know, issue 2 went to print with an early version of the manuscript that still contained a few typos. That has been corrected and it is now available again on all the usual online vendors. We have also completed the ebook versions of issue 2 with the corrections made.”