New (Wasteland & Sky): It’s been a long time coming, but today it the say 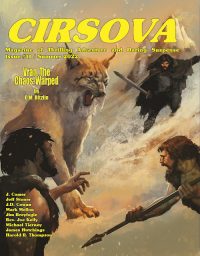 Cirsova puts out their new issue. not only that, but for the first time, I have been included in its pages! You won’t want to miss out on this action-packed issue. Cirsova hasn’t missed yet. Running since 2016, it has proved itself to be the modern successor to the old pulps, like a mashing together of Planet Stories and Weird Tales, without taking the fun out of either. 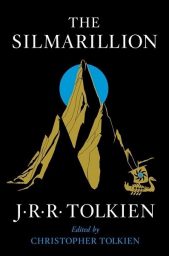 Tolkien (Joy V Spicer): ‘The Silmarillion is an account of the Elder Days, of the First Age of Tolkien’s world. It is the ancient drama to which the characters in The Lord of the Rings look back, and in whose events some of them such as Elrond and Galadriel took part. The tales of The Silmarillion are set in an age when Morgoth, the first Dark Lord, dwelt in Middle-earth, and the High Elves made war upon him for the recovery of the Silmarils, the jewels containing the pure light of Valinor.’ I had previously reviewed ‘The Silmarillion’ a couple of years ago, but having re-read the book, I thought it would be fun to do an updated review. 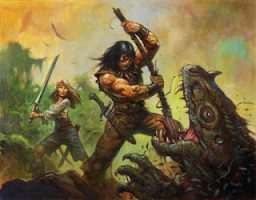 ): A few pertinent details about the novel can be gleaned from the Amazon page, including the October 18 release date, price and page-count. This last number, 496 pages, is slightly worrying – Conan as conceived by Robert E. Howard was the hero of short, tightly written novellas and short stories. Even advertised as a standalone, the page-count of a modern doorstopper stands in sharp contrast. That’s not to say it can’t still be the pulpy adventure Conan deserves, but much depends on the writer.

Lovecraft (Tentaclii): My Patreon patron John Millar asks: “Did HPL read the work of the American science-fiction writer E.E. “Doc” Smith? Did he offer an opinion about it?”

Born in 1890, the early science-fiction pulp writer E.E. “Doc” Smith was the same age as Lovecraft. Like Lovecraft he was also a doughnut enthusiast. But in Smith’s case, he didn’t just dunk the ‘nuts in his three-sugar coffee. He made a career out of the food science of making doughnuts.

Authors (DMR Books): I’m David J. West, and write most anything that 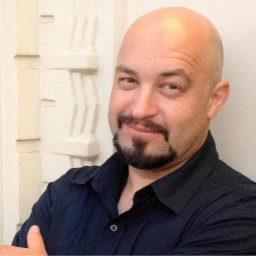 strikes my fancy, a whole lot of sword and sorcery and weird westerns and branching out into historical and some Lovecraftian stuff. I like to write what I want to read and have found that sometimes it helps to coax the algorithms so I have been putting a lot of my sword & sorcery under the James Alderdice pen name – not a secret by any means, just working that angle for marketing’s sake. 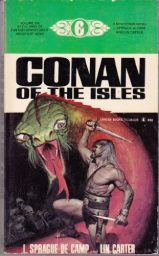 Conan (Sprague de Camp Fan): The best literary look at Lin Carter (and his collaborations with L. Sprague de Camp) is a book that now commands a price of about $200. The book is Lin Carter: A Look Behind His Imaginary Worlds, Starmont House, 1991 by Robert M. Price (Lin Carter’s literary executor). Why Wildside Press or some other small press publisher hasn’t reissued this book is puzzling. The high markup price for the original seems to indicate that the demand is there. Below is a quote from the book:

Fantasy (Goodman Games): This earlier catalog was the Ballantine Adult

Fantasy Series. Edited by Lin Carter, an esteemed author of science fiction and fantasy in his own right, this literary series was comprised of more than sixty titles released between 1969 and 1974 by Ballantine Books. It brought to light both new authors and revived older works from the dustbin of history, exposing fantasy fiction to new audiences in both the United States and abroad. But before examining the works comprising the Ballantine Adult Fantasy Series, a little background history must be explored. 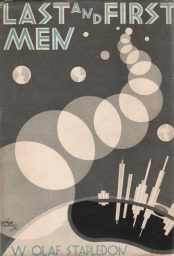 Science Fiction (Murray Ewing): How to approach Olaf Stapledon’s future history epic Last and First Men today? It was first published in 1930 (by Methuen, who clearly weren’t too burned by the poor sales of David Lindsay’s A Voyage to Arcturus ten years before), and its first chapters — all the ones which use such terms as Europe, America, Britain and China — were instantly outdated by the outbreak of the Second World War. These early chapters, which perhaps might be read as satire if Stapledon were of a more satirical bent, are anyway the least interesting. 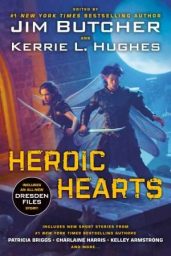 new story collection Heroic Hearts, you learn that heroism comes in many forms, whether flying, furry or four-legged. Harry Dresden may be a battle-hardened Chicogoan wizard, but Harry would have gotten nowhere if it were not for Toot Toot. Likewise, in Kevin Hearne’s Iron Druid series, we all know that it isn’t Atticus that is the main character but his four-legged Irish Wolfhound Oberon. 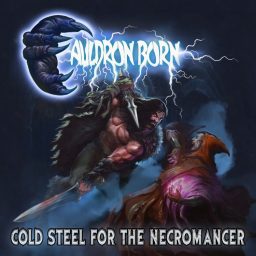 Interview (DMR Books): Hello! I am Matthew Pungitore! In this article, Howie Bentley talks to me about music, sword-and-sorcery, and more! Without further ado, let the thunder commence! Please tell me about yourself, who you are, where you’re from, what you do? I am a heavy metal musician. I am originally from the mountains of Southeastern Kentucky, though I spent almost thirty years of my life in the Atlanta area before moving back to Kentucky in 2016. 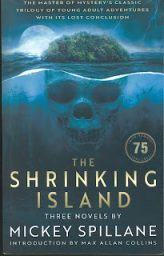 Back” and “The Ship That Never Was,” the two previously published Larry and Josh stories along with “The Shrinking Island.” Published here for the first time. Reading these, we immediately see the formula the author established. Much like all traditional young adult stories, Larry and Josh become new versions of the Hardy Boys only with an exotic Caribbean background.

Science Fiction (M Porcius): Advertising works!  At the end of my Ace paperback of Poul Anderson’s Flandry of Terra we saw an ad for Fred Saberhagen’s Love Conquers All, a novel first serialized in Galaxy at the end of 1974 and the start of 1975, then published by Ace in 1979.  The book was reprinted in 1985 by Baen with an absurdly generic and lackluster cover.

Science Fiction (Tellers of Weird Tales): Charles Fort‘s third book, Lo! (1931), was serialized in Astounding Stories in eight parts, from April to November 1934. It seems certain to me that, as a young writer and reader of science fiction stories, John W. Campbell, Jr. (1910-1971) would have encountered it. Just three years after Lo! was in Astounding, Campbell became editor of the magazine. In March 1938, the title went from Astounding Stories to Astounding Science-Fiction and the Golden Age of Science Fiction was off to a start. The hyphen was later dropped. 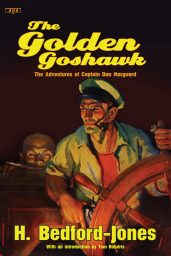 short series by H. Bedford-Jones (1887-1949), the adventures of Captain Dan Marguard. These were written under the pen name of Captain L.B. Williams, which he would also used as Bedford-Jones’ “co-author” of his “Ships and Men” series in Blue Book in 1937-39 (since reprinted by Steeger Books and reviewed here).

Fiction (Chimney Sweep Reader): The year is 1943 and Lieutenant (j.g.) Peter Taylor serves as the Communications officer aboard the Destroyer U.S.S. Dee whose mission is to hunt for and destroy German subs in the Atlantic. The novel is told from his first-person perspective and chock full of shipboard life over a two-month mission.  As they hunt the elusive enemy subs, readers learn a lot about the way the ship operates, about the key members of the crew and above all what it means to wait.

Science Fiction (Marzaat):  Like several other Piper stories (“Time and Time Again”, “The Edge of the Knife”, “When in the Course . . . “, “Flight from Tomorrow”), this story features nuclear war. It was published in the December 1959 issue of Fantastic Universe Science Fiction. While it shares, with the Terro-Human Future History, the idea of the survivors of a nuclear war between America and the USSR going to the less damaged Southern Hemisphere, it is not part of that series.

Fiction (Steve Carroll Writes): I recently found myself sucked into the 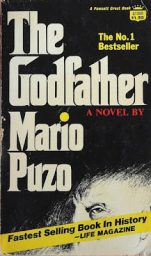 limited television series, The Offer, which details the behind the scenes trials and tribulations involved with producing the motion picture adaptation of Mario Puzo’s hugely successful novel, The Godfather. I was sufficiently intrigued to re-watch all three of Francis Ford Coppola’s highly regarded and Academy Award-winning films based on the book and its characters. 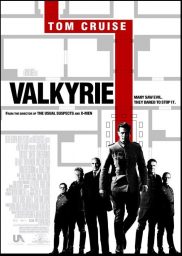 Cinema (With Both Hands): Yesterday, I went to see the new film Valkyrie [changed to IMDB link BIE], directed by Bryan Singer. Starring Tom Cruise as Colonel Claus Graf Schenk von Stauffenberg, the film deals with the plot to assassinate Adolf Hitler on July 20, 1944. As we all know, the bomb planted by Graf (Count) von Stauffenberg exploded, but Hitler was only slightly injured, and the coup that some army officers and civilian opposition were trying to organize in Berlin collapsed. “Valkyrie” was the name of the army’s contingency mobilization plan for the Home Army that the plotters had planned to use to take over the government.

of large-sized amphicyonid carnivore from a fossilized mandible found in France. Amphicyonids (family Amphicyonidae) represent one of the most characteristic groups of predators in the ancient European faunas. Often colloquially referred to as bear-dogs, these creatures resembled a cross between a bear and a large dog.

History (James LaFond): The general tone of Roman governance as beneficent should be taken from Gibbon’s perspective, as a member of the elite who were the objects of governance in his own time, who lived upon the backs of the tools and subjects of governance, atop the suffering of a barely free to unfree multitude who equaled in their silence the slaves of Rome, who outnumbered their masters by at least ten-to-one.

Archaeology (West Hunter): The fossil footprints around an ancient lake in White Sands have been known for some time, but now we have what look to be perfectly respectable C-14 dates. They’re about 22 thousand years old, close to the Last Glacial maximum (LGM) and, as such clearly predate all existing evidence of human settlement of the New World (south of the glaciers, anyhow). There were already hints: Amerindian populations in South America, mainly in Amazonia, carry a trace of a different genetic heritage.