Horror (Bloody Disgusting): The phrase “cosmic horror” conjures up images of massive tentacled beasts that defy all aspects of human 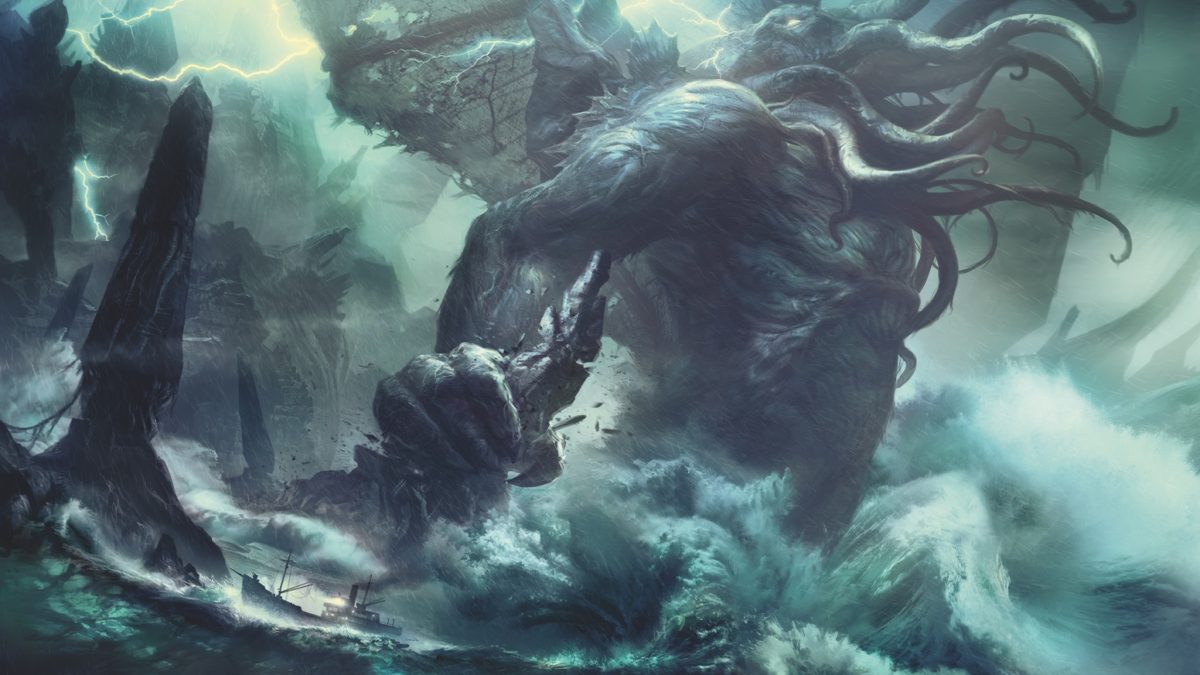 understanding. Monsters created by author H.P. Lovecraft, such as Cthulhu, Dagon, and Shub-Niggurath, drive those that see them into madness, driven insane by their pure incomprehensibility. Their massive size, many limbs, innumerable eyeballs, and unnatural forms only amplify their horrific nature, making humans realize their insignificance in the universe. It is a genre that allows for speculation and questions about what it means to be human, especially in the face of these monsters.

RPG (Brain Leakage): I was introduced to D&D in 1994, during my freshman year of high school. I had no idea what to expect going in. The sum total of my exposure to D&D up to that point was vague memories of the old cartoon, half-remembered rumors about the Satanic Panic of the 1980’s, and multiple viewings of Charles Band’s glorious, b-movie masterpiece, The Dungeonmaster.

Art (The Silver Key): Last week I had the pleasure of meeting a sword-and-sorcery legend: The talented Tom Barber, perhaps best known for his 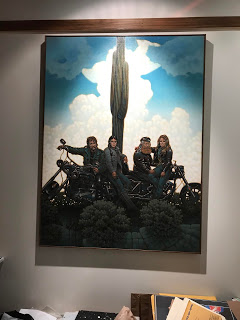 illustrations of Zebra paperbacks in the 1970s, including a Robert E. Howard title (Black Vulmea’s Vengeance), several Talbot Mundy reprints, and a trio of stunning covers for a Weird Tales paperback revival edited by the late great Lin Carter.

Edgar Rice Burroughs (Recoverings): With his hopes of entering the hallowed ranks of the slicks dashed, Ed turned the book over to Munsey and McClurg. Bray was still at McClurg, but Davis was gone and his replacement was Matthew White, 69 years old and the editor for Argosy since 1886. White wanted a shorter title than The War Chief of the Apaches, and suggested, “Apache,” “The Big Chief,” or “The Good Indian.” “Apache” might have confused book buyers into thinking that it was about the notorious Parisian Apaches, muggers and criminal gangsters of Europe. Ed wasn’t happy with any of the alternate titles, for good reason, and The War Chief was finally settled on. 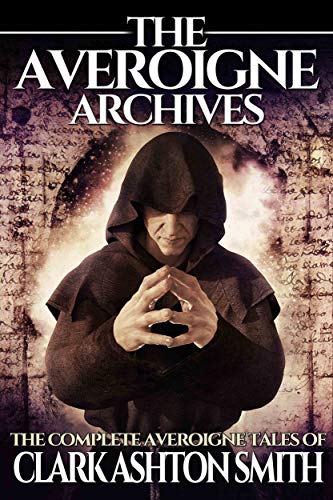 medieval French province of Averoigne. There have been many attempts to collect all 11 stories over the decades, but none of them were able to get off the ground until recently.

Gaming (Greyhawkery): Greetings Greyhawk enthusiasts! Today’s topic comes with a map of the ENTIRE Flanaess. I was mulling over a subject while trying to banish thoughts of not being at Gen Con 2019 and then it dawned on me, how about a “What If” scenario? I’ve done similar premises in the past, it’s fun to tinker with world-wide events and what was more game changing to the World of Greyhawk than the 2E Greyhawk Wars! For those who don’t know the events an geo-political changes that happen post-wars and through 591 CY then check out this timeline. Surprisingly the “Greyhawk Wars occurred in a short span (582-584).

Gaming (Hack Slash Master): I’ve run. . . a lot of high-level games. The first high-level campaign I ran started in 1984, and involved going through the entire Temple of Elemental Evil and environs in a second edition campaign. I’ve run several high level 5th edition campaigns, including 17 levels of Horde of the Dragon Queen, 1st edition Advanced Dungeons & Dragons to level 11/12, Pathfinder and 3rd edition, ranging up to levels around 14. My average campaign length is about 50 games, which is approximately 18 months of play.

Westerns (Brian Niemeier): If you want sterling example of top-down social engineering, look no further than the death of the western.
The western genre dominated novels, magazines, comics, and movies for decades. Contrary to common misconceptions, westerns never faded in popularity. One day, the word came down that westerns were over. These days, this once noble genre is a haven for vanity projects by over-the-hill

Cinema (Rough Edges): I suspect this is one of those love-it-or-hate-it movies. I love it. THE MAN WHO KILLED HITLER AND THEN THE BIGFOOT has such a goofy title that you really don’t know what to expect, and it asks the viewer to accept a lot of odd things that are played with an absolutely straight face, but for me, it works.

Ian Fleming (M Porcius): The first James Bond novel, Casino Royale, was published in 1953; I’m reading a scan of a paperback published in 1983 by Berkley.  This isn’t one of the books I tackled as a child, and the only Casino Royale film of which I am aware is the spoof one starring Barbara 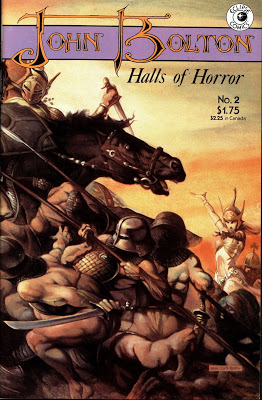 Bouchet (you loved her in The Red Queen Kills Seven Times), so I have no idea what the plot of this thing is going to entail.

Comic Books (Porpor Books): In the mid-80s, Eclipse Comics got the rights to reproduce comics from early 80s UK titles, including Warrior. One memorable Warrior entry was ‘Spawn from Hell’s Pit’, the inaugural episode of ‘Father Shandor: Demon Stalker’ which debuted in the very first issue of Warrior in 1982.

Writing (Pulprev): Much of modern entertainment is a garbage fire.

Many male characters are weak, wimpy and wishy-washy. They exist not as men in their own right, but simply to make the designed Strong Female Character look even more powerful when contrasted against their incompetence. Shounen protagonists inevitably run away screaming at the first signs of romance and emotional intimacy, those that aren’t blank slates for the audience to project themselves into.

Comic Books (Bookgasm): If you grew up in the ’80s, once you hit puberty and got over the superhero comics that are flooding the big screen, the 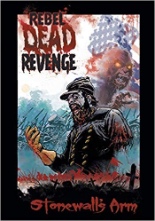 only magazine left on the rack was Marvel’s gory, black and white, comic-code free “Savage Sword of Conan.” Those busty wenches and barbarians were everywhere in the 1980’s – from album covers to conversion vans. It seems like a different world now.

Fiction (Smashpages): Will Murray has long been a journalist for Starlog and other publications, but he’s best known as one of the great pulp historians. Murray’s been involved with the recent reprints of Doc Savage, The Shadow and other characters. A few years ago, Murray had two major books published, Writings in Bronze, which collected a lot of his writings about Doc Savage and Lester Dent, and Wordslingers, a book about the pulp Westerns, and more broadly, about what the Western genre was and continues to mean.

Robert Heinlein (Tip the Wink): Tunnel In the Sky by Robert A. Heinlein. Scribner’s & Sons, 1955. Juvenile novel # 9  Published in both hardcover 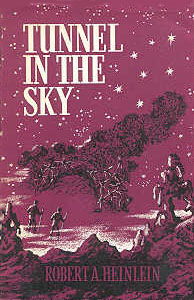 and paperback that year by Scribner’s as part of the Heinlein juvenile series.

The Plot
BACKGROUND: The novel is set in the future, when overpopulation on Earth has been lessened after the invention of teleportation, called the “Ramsbotham jump”, which is used to send Earth’s excess population to colonize other planets. However, the costs of operating the device mean that the colonies are isolated from Earth until they can produce goods to justify two-way trade.

Author Interview (DMR Books): David C. Smith is one of the most well-respected sword and sorcery authors from the ‘70s. He’s also been a friend and supporter of DMR Books since the beginning, when he wrote the introduction for our very first release, Swords of Steel. He has a brand new story in our brand new anthology Warlords, Warlocks & Witches, so I thought this would be a good time to learn more about his career, as well as his current endeavors (which will be covered in part two tomorrow).