Comic Books (Arkhaven Comics): This is the biggest moment in comics for decades. It changes how you, the reader, in a word, reads the comic book. Anybody who has tried to use a system like Comixology’s knows how bad it is.  It loads the full page and then it TRIES to zoom in on the right panels in sequence, it rarely gets it right. Especially when you are using a smart phone, which is the system it’s supposed to be designed for. Once you are done with that page you “flip” to the next, (assuming you didn’t already do so accidentally while you were frantically tapping at your phone), and the process starts all over.

Comic Books (Bleeding Fool): One of the Big Two publishers, DC Comics, is bumping the price up on some of its monthly titles to $5.99 for a 40-page issue. In its solicitations for June releases, several ongoing series, The Joker #4, Superman Red & Blue #3, Wonder Woman: Black White and Gold #1, and one of the company’s flagship books, Batman #109, are all listed with $5.99 cover prices. Think about that for a moment. If someone wanted to read all four of those titles, it would cost about $24 (before tax) to do so. Four comics, $24. That’s a big financial hit.

Games (Kairos): Caesar and the Amazon: separated at birth? The evidence speaks for itself. AAA game studios no longer put serving their customers first. They haven’t for a long time. Instead, they serve the precepts of an inhuman cult that hates beauty – especially feminine beauty. Playing Diablo II: Resurrected is tantamount to participating in a humiliation ritual. Don’t give Blizzard the satisfaction.

Games (Future War Stories): Here we go again! This is yet another

installment of the forgotten military science fiction games. While some of these are more forgotten than others, like MDK, these are games that have dropped off the public radar. Only three more lists to go! At the moment, FWS is researching and finishing the Clone soldiers article, but I felt that FWS needed an update.

RPG (Jeffro’s Space Gaming Blog): Fifty years ago the first fantasy campaign was announced thusly: “There will be a medieval ‘Braunstein’ April 17, 1971 at the home of Dave Arneson from 1300 hrs to 2400 hrs with refreshments being available on the usual basis….” Verily, this is a VERY SPECIAL date in gaming history and Dave Arneson would in a few short years go own to co-create with Gary Gygax one of the most remarkable games ever conceived.

Robert E. Howard (REH World): Valeria is a pirate and adventuress (a

Robert E. Howard (Frank Ormond): “The Grey God Passes” was originally submitted by Howard to Weird Tales in 1931, but was rejected at the time. It was previously rewritten with fantasy elements, but he later rewrote this story as well into “The Cairn on the Headland” with added horror elements. That makes a total of three Howard stories all centered on the Battle of Clontarf. “The Grey God Passes” would later be published after Howard’s death in 1962.

Fiction (DMR Books): Haggard had his apostles, Arthur Conan Doyle and Rudyard Kipling chief among them. Both men admired Burton. Doyle’s career took off slightly ahead of Kipling’s, so we’ll start with him. While one could argue that Burton being a fairly good model for a ‘superman’ might have influenced Doyle’s Sherlock Holmes, I prefer to stand on firmer ground: namely, ACD’s classic exotic adventure novel, The Lost World, which was published in 1912.

Science Fiction (M. Porcius): I found myself in the presence of four

different editions of A. E. van Vogt’s The Mind Cage.  Spurred by this encounter, I decided to read the 1957 novel, an expansion of a 1948 story, “The Great Judge,” but I had no need to buy any of the copies I saw there in Hagerstown, because I already owned yet a different edition of the oft-reprinted book, the 1965 printing by Tower. The year is 2140, a little over twenty years after the Third Atomic War.

H. P. Lovecraft (Player None): Pickman’s Model (1926) Richard Pickman is a painter of macabre and horrific images. His works are, in fact so bizarre and terrifying, that he is shunned by the Bostonian art world because of them. It doesn’t matter, that his paintings are masterfully done, as his works depicting grotesque monsters haunting the streets and feeding on people tied to his unpleasant nature push him away from grace as far other artists are concerned.

Anderson & Gordon R. Dickson, has been on my TBR list for years and, thanks to Tantor Media, which just released the first audio edition, it has finally landed in my audiobook player. As I anticipated, this collection of stories about the cute fuzzy aliens known as the Hoka, were really entertaining.

Fiction (Isegoria): The Princess Bride features some of the earliest —

maybe only — references to historical fencing masters in film:

Inigo: “You are using Bonetti’s defence against me, huh?”

MIB: “I thought it fitting considering the rocky terrain.”

Pulp (Pulp Net): So far in my look at various pulp-related publishers, I have focused on those still in operation. Now I’ll take a look at a former

publisher: Odyssey Publications. Odyssey existed in the mid-1970s to mid-’80s, putting out a few but excellent publications. I have mentioned several in past postings. They put out the short-lived Duende fanzine (two issues, in 1975 and ’76), the excellent Duende History of the Shadow Magazine (1980), the first of a planned two-volume reprint of the first Doc Savage radio show (1982).

Popular Culture (Pulp Rev): Of M. Night Shyamalan’s films, Signs is one of my favorites. I saw the film when it was released in theaters in 2002, and when it was recently made available on streaming, I gave it a rewatch. In this essay, I’ll examine how male social hierarchies are depicted in the film. Overall, Signs is an excellent film, although it does have some flaws. Shyamalan excels at Lovecraftian horror, both in the writing and behind the camera. I particularly like his use of slow-disclosure shots, which are effective in heightening suspense.

Tolkien (Tor): So to recap, we know that between year 0 and year 1130 of the Third Age, the Dark Lord himself was downgraded, too weak to pour any of his get-up-and-go into the Orcs. In his long absence, their presence was small, their evil out of sight, their reach minimal. When he came back, they surged again. But during the War of the Ring, he was defeated again—for realz this time lol—and the Orcs who survived lost all their oomph and were brought to the edge of extinction. All in all, Sauron’s tenure as the Dark Lord spanned about 5960 years, beginning five hundred years into the Second Age and lasting until the end of the Third.

Cinema (Lawrence Person): This is the best of the Monsterverse movies. The people at Legendary Films seem to have finally figured out what viewers actually want (hot kaiju-on-kaiju city-destroying action) and what they want left on the cutting room floor (boring human backstory). The movie opens with Godzilla contained within a Truman Show-type dome over Skull Island and Godzilla attacking the Florida research facility of sinister Apex Cybernetics (think Yoyodyne or Weyland-Yutani).

back when had to wait a good long time for. This book was released in August ’47 as a $3 Fantasy Press hardcover and has not been reprinted in the almost 75 years since! And this strikes me as perhaps the most glaring oversight of them all, as a recent read has shown this late-career Taine novel to be not only one of the author’s very best, but a book that would surely appeal to a modern-day audience.

Fiction(Locus): What we have with these tales from pulp’s heyday, in the person of I.V. Frost, is a scientific criminologist who exists somewhere on

the spectrum from Doc Savage to Sherlock Holmes, from Arthur Reeve’s Craig Kennedy to Ernest Bramah’s Max Carrados. The popular literature of the ’30s and ’40s was replete with these oddball investigators who gave the Black Mask noir guys some steady and formidable competition. Their cases were outré and bizarre and not anchored in pure naturalism in the style of Chandler et al., however mannered that mimesis might be.

RPG (Skulls in the Stars): Night Below was billed as the “first epic 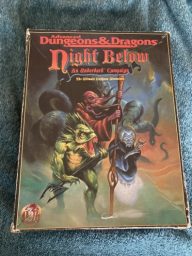 campaign adventure for the AD&D game,” though that it certainly a bit of an exaggeration, considering the whole Against the Giants -> Queen of the Demonweb Pits series of modules. But Night Below may have been one of the first campaigns designed as a single product to take players from first level all the way to 10th level and beyond, and it is truly epic!

Lost Worlds (DMR Books): On a lighter note, I have to say that the concept of a Hollow Earth has brought me nothing but joy and wonder–as opposed to guilt and riots–since the day I first read of it. My initial exposure to the idea was by way of Edgar Rice Burroughs and his ‘Pellucidar’ books. I found those in my local public library. 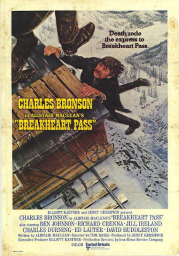 movie that, I admit, holds a special place for me because I watched it with my dad. He was a huge Western fan, as well as a fan of MacLean and Bronson. Gries was another of those utility directors Hollywood used to be filled with. In addition to loads of tv episodes (he created The Rat Patrol), he directed one of Charlton Heston’s best movies, the Western Will Penny (1968).*

History (Stars Came Back): I just finished “The Forgotten Slave Trade: The White European Slaves of Islam“, by Simon Webb. Absolutely great book. It actually covers a lot more of the history of slavery than JUST white Islamic slaves, because there are several closely related parts of the slave-trade that all need to be spelled out to make the whole picture make sense. It doesn’t cover Native American slavery, south or east Asia slavery, but most of the rest of it gets hit.

Acting (Beware the Blog): PAUL FIX had a career consisting of a 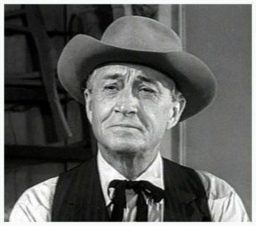 combination of 527 motion picture and television appearances. but most people wouldn’t be able to put a face or role to his name. Let alone know that it was Fix who taught John Wayne that famous walk of his. However, if you were a fan of television’s “The Rifleman”. You knew the actor as “Marshal Micah Torrance”, but that was 33 years after Paul Fix started acting.

Leave a Reply to Fletcher A. Vredenburgh Cancel reply