T.V. (Arkhaven Comics): If Isaac Asimov and Frank Herbert had had a baby 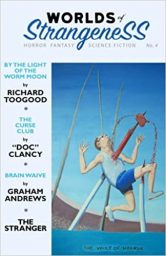 New (Worlds of Strangess): A collection of short stories and articles.
Stories from “Doc” Clancy, Richard Toogood and Graham Andrews.

Fiction (Real Book Spy): 2021 is flying by, but that doesn’t mean you have to 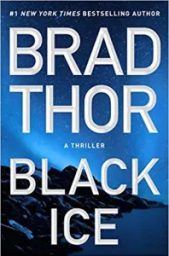 miss any of the year’s best thrillers. As summer comes to a close, we’re taking a quick trip back through twenty of the very best books that have come out so far, from some of the biggest names in publishing. Whether you’re looking for hard-hitting action or mind-bending psychological suspense, this list has it all and then some. Check out each title below, then be sure to leave us a comment (or tag us on social media) and let us know which one’s your favorite. 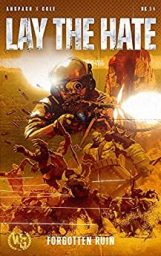 Review (With Both Hands): Lay the Hate is the fourth book in the Forgotten Ruin book series, Jason Anspach and Nick Cole’s prose poem to the Rangers and D&D. [Amazon link] In book four, the Rangers decide to get into the domain-level game, Talker has an urban adventure, and the best of plans are waylaid by an unfortunate wilderness encounter. If you understood all that, you should just go buy this book. If you did not, allow me to explain.

Robert E. Howard (Scott Locklin): Robert E. Howard books; Conan and Bran Mak Morn are a sort of peak pulp storytelling of a certain kind, just as his friend HPL’s stories are peak pulp horror. The main problem with his books are there aren’t enough of them. The man killed himself at age 30, so he wasn’t drawing on a particularly deep reading life. You have to figure there was a lot of Conan taken directly from the stuff he read, and Conan fans might get a kick out of his literary interests.

Michael Moorcock (DMR Books): In a July 1, 2021 episode of the podcast 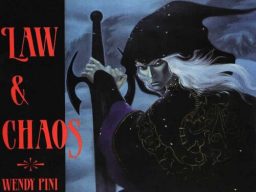 Hard Agree with host Andrew Sumner*, Moorcock explains that he was approached by the likes of filmmaker Ralph Bakshi for an adaptation of Elric. This would have been circa 1978, as Moorcock mentions watching an early print of Bakshi’s visually arresting but flawed The Lord of the Rings in the director’s own production studio. It was a heady time and place for Moorcock, who was residing in Hollywood and meeting actors like Christopher Lee and Gene Wilder. 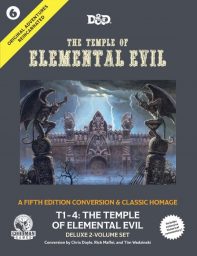 RPG (Goodman Games): Wow, The Temple of Elemental Evil! Never in my wildest dreams did I think I would get to work on such an iconic D&D module. When I heard that Goodman Games was going to do this as the next OAR book I flipped. I was filled with hope that I’d get to be a part of it but also worried that I might not. What a relief when I got my first art assignment! As a kid I never got to play much D&D as I wasn’t really part of any group of friends that did; I did have the purple boxed set with Erol Otus’s amazing cover however. I was heavily into TSR’s Endless Quest books, art books, calendars, etc.

is announced as the lead artist on two comics to be published by Arkhaven Comics.

Earlier this month, Marvel Comics dropped longtime Marvel illustrator Joe Bennett from its Timeless comic for the thought crime of having drawn an illustration in support of a popular Brazilian politician, Jair Bolsonaro, in 2017, two years prior to Bolsonaro’s election as Brazil’s 38th President. It was widely reported that Bennett had not only been removed from the December one-shot, but was entirely cancelled by Marvel Comics and would not be contributing to future Marvel projects.

Tolkien (Notion Club Papers): Why is it that in Tolkien’s world, Men come after the ‘first born’ elves and take-over from elves as the dominant humans on Middle Earth?

In one sense this sequence of elves then Men ‘had to’ be true if elves ever were to be dominant, because Tolkien was writing ‘feigned history’ and his reader lives in a world of Men – where elves are either absent or hidden.

RPG (Forbes): There’s never a bad time for a Cthulhu campaign, but as we descend into spooky season, now is a great time to start a Call of Cthuhu game. Ask most fans of the Mythos what their favorite campaign is and they’ll tell you its Masks of Nyarlathotep. This globetrotting campaign returned in a big way in the past few years. Let’s take a look at what makes it so great and what a small company in California has done to make it even better.

RPG (Grognardia): I was reminded of the existence of War of Wizards, 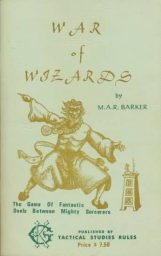 published by TSR in 1975. Appearing in May 1975, the game is fascinating on a number of levels, starting with the fact that, because of its publication date, it’s the first appearance of the world of Tékumel in print. Remember that Empire of the Petal Throne, which is usually taken to be the world’s introduction to the setting, wouldn’t appear for another few months and understandably so.

Tolkien (Tolkien and Fantasy): It must have been around five years ago that Tom Shippey asked me if I knew anything about There and Back Again (1932) by C.H. Dodd, as a potential influence on The Hobbit.  I think he had been asked the question himself at some conference, and thought I might know. But I didn’t. Well, it turns out that the book itself is quite rare, and it took years for me to find a copy to read.  And the results are interesting.

Fiction (Pulp Net): Here we have the second volume of Solar Pons stories 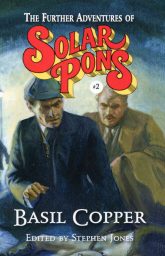 by Basil Copper: The Further Adventures of Solar Pons. It first appeared in 1979 as volume 9 in the Pinnacle series, and was reprinted in 2017 by PS Publishing and edited by Stephen Jones in the definitive edition. Three of these stories appeared in the Pinnacle edition. 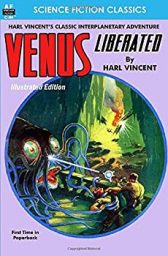 Fiction (Fantasy Literature): While reading Harl Vincent’s 1929 offering Venus Liberated. Indeed, featuring as it does space travel, a visit to two nearby worlds, weapons and assorted gadgets of superscience, romance, warfare, and some truly hissable and hideous aliens, the book would have been a natural, it seems to me, as the source of a 1950s sci-fi film.

Review (Bloody Spicy Books): There a far too few writers like Mickey 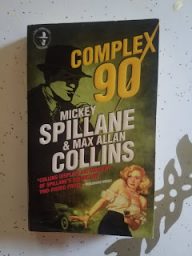 Spillane around, in fact there was only ever one writer (not author) like Mickey. He was a true American original who enthralled countless readers since his days writing them funny books (i.e. comics) but with the creation of Mike Hammer, Mickey found himself a winner and when I found both Mickey and Mike I found a life-long companion. 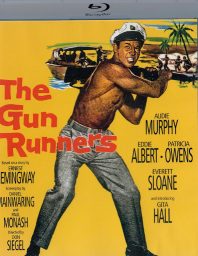 starring Audie Murphy looks great in Blu-ray which is loosely – and I mean loosely – based upon Ernest Hemingway’s 1937 novel, To Have and Have Not. This is the third film version, the first being the classic 1944 version with Bogart and Bacall. The second was The Breaking Point (1950) starring John Garfield. This version was directed by Don Siegel who previously directed Murphy in Duel at Silver Creek in 1952.

Review (Pulp Fiction Reviews): We picked up a paperback novel called “The 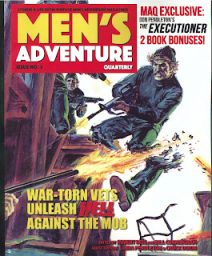 Executioner – War against The Mafia” by Don Pendleton. It was to be the first in a series from a new publisher named Pinnacle. A few weeks later they released, “The Destroyer” by Richard Sapir and Warren Murphy. After reading both of these initial adventures, we had one thought – the pulps were back! 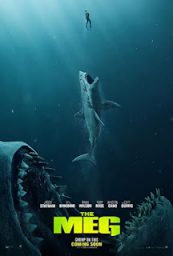 Cinema (Ricochet Reviewer): A giant, prehistoric megalodon emerges from the depths of the Marianas Trench only to find that it doesn’t stand a chance against Jason Statham. Many reviewers have compared this film favorably with the Syfy Channel’s Sharknado series, which is a case of damning with faint praise if I’ve ever seen one. 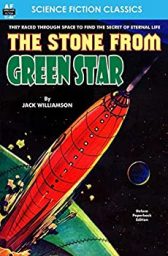 old-fashioned pulp thrills, Williamson style, I chose at random one of his earliest novels, The Stone From the Green Star, and wow, am I ever glad I did! This novel originally appeared as a two-part serial in the October and November 1931 issues of Hugo Gernsback’s Amazing Stories magazine, the very first publication to dedicate itself solely to science fiction. 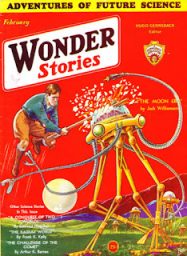 Science Fiction (M Porcius): In our last episode I sifted through a pile of old paperback anthologies with awesome covers to read stories by Jack Williamson, and today we read Williamson stories from anthologies which are not quite so old and whose covers are maybe not quite so awesome. “The Moon Era” debuted in the same issue of Wonder Stories, edited by Hugo Gernsback, as did Edmond Hamilton’s story “Conquest of Two Worlds,” which we read a few years ago.

Folklore (DMR Books): Folktales do not only have to be read as traditional warnings from long ago. We can examine them as we do any kind of art piece. We can connect with them, make them a part of us, and put pieces of us in them. Especially if folktales are meant to travel and to evolve, then they need to be experimented with.

RPG (G C Sprigg): After the middling reaction (at best) to the Emirates of 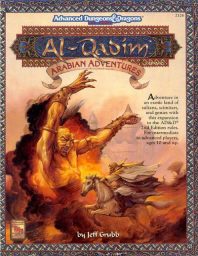 Ylaruam, TSR took their Arabian Nights interest into 2nd Edition AD&D with the first product of the Al-Qadim line, Arabian Adventures. The book makes it clear: Unlike GAZ2, this time we’re going full-blown fantastic adventures, leaving the real-world comparisons to a minimum. Genies, sorcerers, desert scions with secret noble bloodlines…oh, yeah. Bring it all on. We even get the introductory scene from the Arabian Nights stories, with King Shahryar and Scheherazade and the start of the tales 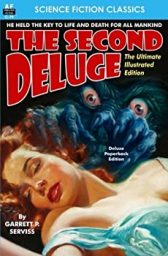 Science Fiction (Fantasy Literature): The Second Deluge was initially released as a six-part serial in the pages of The Cavalier magazine, from July – December 1911, and appeared in hardcover form the following year. It would then be reprinted in the various pulp magazines of the day (more on those in a moment) in 1926, 1933 and 1948, and later in book form again from Hyperion Press (1974), Wildside Press (2013), Gateway/Orion (2015), and the one I was fortunate enough to lay my hands on, the 2018 edition from Armchair Fiction.

Review (Marzaat): In the follow up to his Rubicon, Holland takes up the story of the legendary Julio-Claudian emperors. With 419 pages of text, he covers all the stories of treachery, torture, matricide, fratricide, sexual depravity, assassinations, mutinies, and excess you’ve heard. To that, he explains how Roman sexual mores, religious festivals, family relations, and the plebians’ continued fascination with the dynasty that started with Julius Caesar played a part in everything.