Conan (Venture Beat): Funcom has acquired control of Conan the

Barbarian and other popular culture intellectual properties with its acquisition of Cabinet Group.

The Oslo, Norway-based Funcom will merge the properties into its IP studio Heroic Signatures. In addition to Conan, it is acquiring IPs such as Mutant Year Zero and Solomon Kane. The purchase price wasn’t disclosed. 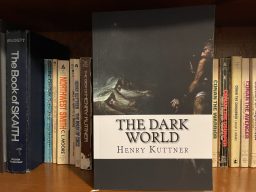 Fiction (Ken Lizzi): A certain murkiness surrounds the authorship of The Dark World (1946), which is only appropriate given the title and the contents of the novel. (Novella? I didn’t count the words, but I wonder if the total actually reached 40,000.) But I’ll hold off on the question of authorship until after I write a bit about the contents. I’m glad we still have access to such oddities. It is unlikely a publisher would pick up such a weird tale today, one lacking clearly defined genre boundaries. Is it fantasy? Sword and sorcery?

Science Fiction Fandom (Wasteland & Sky): We now step into this fourth entry with the full knowledge that Fandom, even though it is smaller than it ever was before, as now apparently at its strongest. What will it do with all this new strength they have amassed, including from industry insiders? That is a good question, and all the previous scheming and convoluted machinations really came to a head in late 1937, when everything hit at once.

Solomon Kane’s, Robert E. Howard’s swashbuckling Puritan, African adventures. In the face of darkness, he sees himself as Satan’s implacable foe.  Kane’s a dour man, dedicated wholly to defeating evil and meting out justice. In two separate stories, he spends years hunting for the killers of innocents. A skilled swordsman, he has freebooted in the New World, suffered at the hand of the Inquisition, and fought vampires and cannibals in Africa. In this story, he battles great bat-winged, razor-taloned monsters.

History (Warfare History Network): On January 30, 1945, a group of U.S. Army Rangers, Alamo Scouts, and Filipino guerrillas set out on a daring nighttime raid on Cabanatuan POW camp in the Philippines.  Led by Ranger Colonel Henry Mucci, they hoped to rescue over 500 American prisoners, including some held by the Japanese since the Bataan Death March. 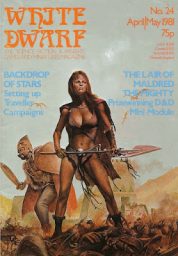 features a cover by Dave Pether, an artist whose name I don’t recognize. Ian Livingston’s opening editorial touches on the growing popularity of roleplaying as a hobby, noting that “Last year TSR sold 500,000 sets of D&D.” Whether that figure is strictly accurate or not, it’s nevertheless a useful reminder of just how successful Dungeons & Dragons was.

Tolkien (Arkhaven Comics): Gary Boechler at Nerdrotic put this surprisingly detailed report together on Amazon’s upcoming Woke disaster. There were a few hot takes that I didn’t know about. First, the Tolkien Estate did not do this willingly. They got hurt in arbitration with Warner Brothers and part of the settlement is that they had to allow a Lord of the Rings. Although, they did get to maintain a right of absolute veto over everything. And when Amazon was up against Christopher Tolkein, he used it. He kept this hideous abortion in development hell for years, probably with the hope that Amazon would give up and the rights would revert.

Fantasy (With Both Hands): Thus, I want to talk about eucatastrophe in the 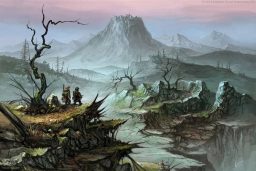 Forgotten Ruin series. Forgotten Ruin is another creation of Anspach and Cole, but this one borrows heavily from both Dungeons and Dragons and J. R. R. Tolkien’s The Lord of the Rings. At the beginning, D&D had a lot of of LotR in it too, but a cease and desist letter put an end to that. However, it is pretty clear that the two things “nick”, the term used to describe when you combine two different lineages and get something that is greater than the sum of its parts. 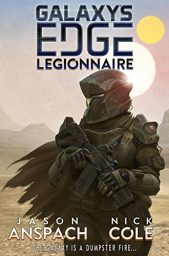 Science Fiction (Kairos): A bombshell dropped over the weekend that has the potential to shake indie publishing to its core. The troubling development involves mega best selling newpub author, and fellow Dragon Award winner, Nick Cole. This ongoing story broke on Sunday night when readers noticed the popular Galaxy’s Edge and Forgotten Ruin series by Cole and his co-author Jason Anspach missing from Amazon.

Tolkien (Silver Key): J.R.R Tolkien has been described as harder to influence than a Bandersnatch, and commonly believed to be utterly 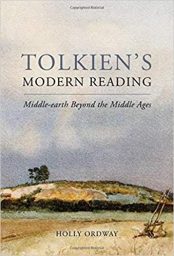 uninterested in any literature written after the Canterbury Tales. As it turns out, these claims are largely untrue. Tolkien was indeed an ardent medievalist, but the “leaf mould” of his imagination was far deeper, and richer, and broader, than just an amalgamation of ancient works.

Games (Wert Zone); Remasters have become a good way for a publisher to

make a fast buck. Take an old game, do the bare minimum of work necessary to get it working on modern hardware, throw in some old expansions and away you go. Back in 2013, Microsoft did that with Age of Empires II: Age of Kings, releasing a “HD Edition” which was serviceable but no more. Unhappy with the remake, Forgotten Empires Studios got permission from Microsoft to continue developing new content for the game in the form of new expansions and updates. 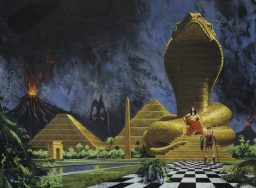 had emerged as a major force with H. Rider Haggard’s She: A History of Adventure and its countless imitators. At the same time, there was a resurgence of speculation about the possible existence of Plato’s Atlantis, stemming from politician and professional heretic Ignatius L. Donnelly’s bestselling Atlantis: The Antediluvian World.

H. P. Lovecraft (Tentaculii): In a 1934 letter to Rimel, Lovecraft remarks… “I didn’t get more than 100 miles from my home until I was 31 years old” (i.e. circa 1922), which provides a useful limit of what he might or might not have seen as a boy, if only from a passing train. No glimpse of the sinister and misty Catskills (“Lurking Fear”) from a Hudson Valley train, then, on a trip with his grandfather.

RPG (Pelgrane Press): Sometimes, a monster’s just a bag of hit points attached to some fun attacks – the heroes roll in, spend a few perfectly enjoyable combat rounds fighting the creature, and then head on to the next encounter. Sometimes, a monster’s a major recurring foe, a devilish nemesis whose schemes and counterschemes reverberate through the campaign, who clashes with the player characters again and again.

RPG & Pulp (With Both Hands): On Twitter, Astonishing Hero asked an excellent question about how in a lot of pulpy adventure stories the hero always beats the bad guy and gets the girl, and then interestingly contrasted it with preferred RPG play style. There was lots of great discussion over on Twitter, but the part of it that really spoke to me was about the relative dearth of tragedy as a literary form in the kinds of men’s adventure stories that I like to read and review.

Review (Frontier Partisans): I hear with envy that Captain Schwertfeger has trekked into the North Woods in search of The Whisper on the Night Wind. I hope he makes it back with a scouting report. I have not yet secured a copy — but I feel the need for a spooky yarn…And what have we here? In my continuing explorations of the mythic territory of Fennario, I stumbled upon the work of one Joe Talon. 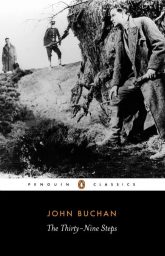 Nine Steps for some years, having seen both the 1935 Hitchcock film (Robert Donat and Madeleine Carroll handcuffed together and on the run) and the 1978 film (Robert Powell hanging off the minute-hand of Big Ben) multiple times. (And I recently caught the second half of the 2008 BBC adaptation. Lydia Leonard rubs mustard into Rupert Penry-Jones’s muscly back. Not a scene from the novel.)

RPG (Jeffro’s Space Gaming): We run an open table, so when one player left the game, a new person manifested from the ether in order to play in our second delve. Players that lost characters last time shuffled in their replacements without missing a beat. With relatively little bookkeeping, we quickly had ten characters headed back to the tunnels. 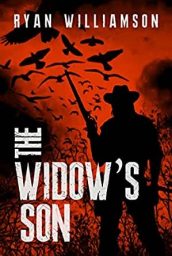 mutant form of pulp cowboy stories. They are often uninhibited, rollicking reads that ignore modern fictional trends. Start the story and go, seems to be the motto. Ryan Williamson’s The Widow’s Son has been getting some press, so I thought I would try it out. Customer advisement here, this is a review of a big novel, and there are some small spoilers for events in the first quarter of the book.

Old West (Western Fictioneers): The name of George Armstrong Custer (1839-1876) is indelibly written in the history of the United States. The Battle of the Little Bighorn in which he died along with five companies that he had led was romanticised as ‘Custer’s Last Stand’ and has been depicted in art, film and all manner of literature.

Interview (Flash Back Files): This year marks the fiftieth anniversary of your novel, First Blood. Yes. Any author who sits down to write a book and says it will still be in print after fifty years is hallucinating. It doesn’t happen very often. A couple of years ago Ira Levin’s Rosemary’s Baby was fifty years old and the publisher asked me to write an introduction for it. I was a literature professor for many years and I enjoy writing about books. So, I wrote an essay. 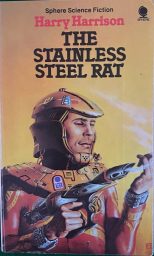 really much more than that: he’s a gift to the bureaucracy that plagues his hi-tech society. His actions, he maintains, keep the inept forces of law and a sluggish economy active. He provides entertainment for people jaded by boring news stories. He… well, he’s good at what he does, and he likes doing it, keeping his nose one sniff ahead of the authorities. It’s only natural that when they eventually catch up to him, they make him one of their own…

Paleontology (Science News): An amateur archaeologist exploring a dried-out, ancient stream channel called Blackwater Draw near Clovis, New Mexico, made a startling discovery in 1929. He came across chiseled stone points strewn among mammoth fossils. Razor-sharp edges bordering each artifact gracefully curved up to a pointed tip. Thin grooves chipped into the bases of these stone points suggested that they were spearpoints that people had once attached to handles or poles.

Science Fiction (Marzaat): In between “Time and Time Again” and this story, Piper had two other works published: “He Walked Around the Horses” and “Police Operation”, both part of his Paratime series. First published in the March 1950 issue of Astounding Stories, this is not part of Piper’s Terro-Human Future History.