Star Wars (Arkhaven Comics): Andor Episode 4. It’s back to being very slow. The excitement has left the building until next week at the earliest.  Good news, the dialog is tight and well structured.  Bad news, it is still in no way a Star Wars show.  The Jedi and the Sith would be completely out of place in it.

Games (Walker’s Retreat): It began as a goof. Over on Twitter, folks in the #BROSR started talking about Ravenloft and how so much of that classic module is torturous and tedious bitchwork because you need to put and keep the players on the narrative railroad from start to finish. Instead, it would be simpler and easier to just hand control of the Dark Lords and several similar Patron-level NPCs to the players and let them go at it in a Braunstein campaign.

Games (Grognardia): One of the things I remember most about Games 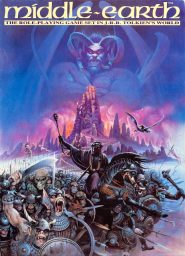 Workshop of old was its publication of UK editions of American RPGs, often in a better and more attractive format. Unfortunately, most of these editions never made it across the Atlantic, so I only ever had the chance to see photographs of them rather than physical copies. In the years since, I’ve rectified this somewhat, as in the case of the 1987 version of Stormbringer, and these UK editions are every bit as remarkable as I hoped they’d be. 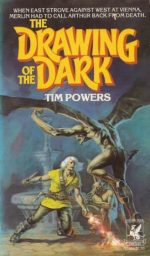 Fiction (John C. Wright): I thought my beloved readers would be interested in a little bit of “inside baseball” from science fiction writers. I was given an idea for a King Arthur story I could not use, and so I sent it along to Tim Powers, in case he could: the conceit for the story would be that King Arthur not only will wake at the Last Battle in England’s hour of greatest need, but has done so previously, for example, during the Great War, but was mistaken for the Angel of Mons, or during the Spanish Armada, when Merlin summoned a storm.

Fiction (Alexander Hellene): Postmodernism is nonsense. Here’s the pop version of it: Through the lens of pomo (what the “cool” people call it), a given thing only has the meaning an individual ascribes to it. That’s it. You just read a book. What does it mean? What does the author say it means? What do the words on the page mean? Who cares? What do you think it means? What is your lived experience? Your truth? What is truth? 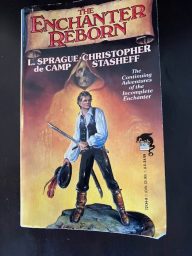 Fantasy paperback that came out in 1992. Christopher Stasheff starts it out with a nice introduction telling how reading a copy of The Incompleat Enchanter he borrowed from his father got Stasheff hooked on fantasy and science fiction. And his dad’s book was autographed by L. Sprague de Camp! Mr. Stasheff was always very grateful to Harold Shea for steering Stasheff into writing science fiction and fantasy! 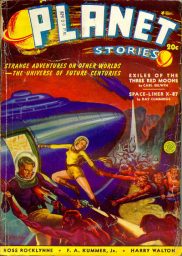 Pulp (Dark Worlds Quarterly): The Meteoric Carl Selwyn was a space opera writer who specialized in Science Fiction. This adjective is apt since he went from unknown to one of the most prolific Planet Stories writers of 1940. He did not write detective stories or Westerns on the side. His real name was Carl Selwyn Pugh Jr. (1917-1984). In his bio for Planet Stories, Selwyn tells us that he grew up on Roanake Island, North Carolina.

2077  has surged in sales and player count following the release of spin-off anime series Edgerunners. Cyberpunk 2077 launched as such a buggy mess in 2020, with issues with graphics, gameplay, and basic functionality. Montages of the glitches were soon shared online, further harming the game’s reputation.

Authors (DMR Books): Please introduce yourself and tell us about your 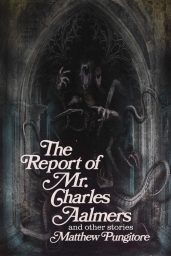 background as a writer.
Hello! I am Matthew Pungitore. I am a writer from Hingham, Massachusetts, and I do volunteer work for the Hingham Historical Society. I graduated with a Bachelor of Science in English from Fitchburg State University. I have written numerous essays, reviews, and various articles for the DMR Books blog.

Rings of Power (The Silver Key): Perhaps you might be wondering, hey, when is that guy from The Silver Key going to weigh in on The Rings of Power? He loves Tolkien. Consider this that post, but it’s probably not the droids you’re looking for. I haven’t watched ROP, and at this moment have no plans to. I explain why in this handy top 10 listicle. 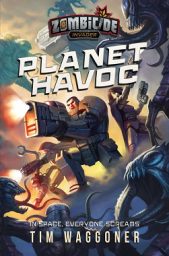 Zombicide: Invader, pitting two opposing groups of humans against an insidious, lethal alien menace in an action-packed tale of soldiers, mercenaries, monsters, artificial life and corporate greed. Recruited by the deeply dubious Leviathan Guild for a dangerous mission to a forbidden world, Luis Gonzalez and his team of mercenaries are intercepted by Coalition soldiers patrolling the off-limits system, both crews soon finding themselves stranded on the desolate PK-L10, or Penumbra. 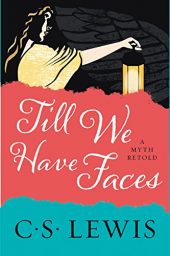 C. S. Lewis (Murray Ewing): I’m a bit conflicted about reading C S Lewis. I want to re-read his Narnia books, for instance, but whenever it comes to sitting down and working my way through the first one (whichever it should be, The Lion, the Witch and the Wardrobe or The Magician’s Nephew), I remember my feelings of being let down by what seems, to me, the rather shoehorned-in moral stance he brings to his Space Trilogy.

Fiction (Isegoria): Man walked in fear and solemnity, with Heaven very close above his head, and Hell below his very feet. No English child will ever again experience, as Peter Hitchens did, the joys of Arthur Conan Doyle’s great historical romances The White Company and Sir Nigel, set in the far-off fourteenth century:

Review (Paperback Warrior): Flint Maxwell is an Ohio native and author of 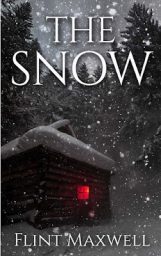 Comic Books (Goodman Games): The creeping tendrils of Tales from the Crypt, Weird Science, and Vault of Horror have been christened part of the root system beneath the mighty sequoia that is Dungeons and Dragons. EC Comics are among the very first influences Gary mentions in the now-famous Appendix N, a bibliography of sorts on page 224 of the 1979 AD&D Dungeon Master’s Guide.

Review (DMR Books): The Wells of Ur is the newest anthology from indie 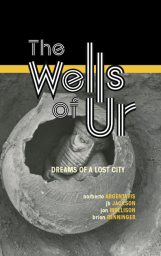 publisher Pilum Press. Pilum, as you are probably aware, recently made waves within the S&S community with their Kickstarter for the new edition of Schuyler Hernstrom’s Thune’s Vision which was a resounding success. Pilum has also published The Penultimate Men: Tales From Our Savage Future and Shagduk by DB Jackson. You can contact them via their website pilumpress.com. 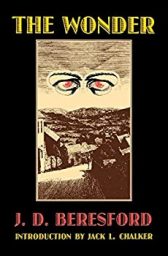 tell you of the latest ubermensch tale that I have experienced, and it just happens to be one of the very first in this well-traveled genre: The Wonder, by J.D. Beresford. The Wonder was the English author’s second novel, following The Early History of Jacob Stahl, and was initially released by the British publisher Sidgwick & Jackson as a hardcover volume in 1911 (when Beresford was 38), bearing the novel’s original title, The Hampdenshire Wonder. In 1917, for its U.S. release, the publisher George H. Doran truncated the title to the one we are familiar with today.

Science Fiction (Tor.com): When I was first struck by the idea that 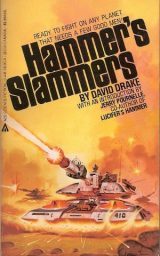 Hammer’s Slammers is a horror story, I immediately had to do some research. I am not a person who reads horror fiction, and other than a few Stephen King and Neil Gaiman stories, have little experience with the genre. Two resources I immediately found useful were a basic search for horror fiction on Wikipedia article and an article in the Encyclopedia of Science fiction on “Horror in SF,” and I encourage interested readers to follow those links, as they address the larger topic far better than I could. 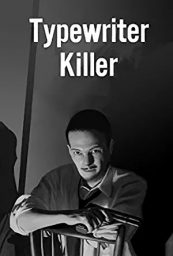 Biography (Marzaat): While you can a decent sense of Piper the man in this book, you get a clearer and more detailed look at Piper’s complete life in Carr’s earlier H. Beam Piper: A Biography. However, this book succeeds at giving you a better sense of Piper the published writer. In fact, I read this book first.

Pulp (Rough Edges): This is the first issue of PRIVATE 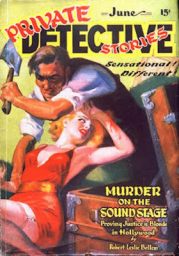 DETECTIVE STORIES, from the same folks who brought us SPICY DETECTIVE, SPICY WESTERN, etc. It’s available in an e-book edition from Radio Archives, and I’ve been reading it recently, a story or two at a time between editing projects. 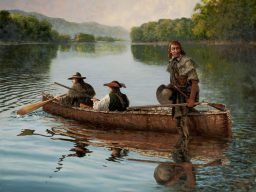 Partisan will be honored this Saturday as a new sculpture of Simon Kenton is unveiled in his old stomping grounds along the Ohio River, a frontier he was instrumental in securing in the decades of conflict during and after the American Revolution.

Muzzleloader Magazine, which features Kenton on its cover in the current issue, posted a message from Mark Sage on the unveiling:

History (Sagas From the Sea): On a clear day I stood on the shore of the Blackwater estuary in Essex. Across a tidal causeway was Northey Island, and sheltered in the inner estuary was the town of Maldon. It was here, on the 11th August 991, that Maldon earned its place in history. The Battle of Maldon saw the destruction of the East Anglian fyrd (local levies raised in time of need) and the death of its leader, Earl Byrhtnoth, Ealdorman of East Anglia, at the hands of a Viking army.