the words one would normally think to associate with a battle featuring Conan of Cimmeria and yet here we are. Now that the smoke has cleared, Ablaze is finally able to deliver translated versions of French Glénat’s Conan comics. Let me see if I can sum it up succinctly. In Europe, most of Robert E. Howard’s works are in the public domain. In the United States?

Publishing (Kairos):  There’s a shortage of paper, because it comes from China. The two largest printers of magazines and books in the U.S., Quad/Graphics and LSC Communications were going to merge last summer, but something got in the way. Now, LSC Communications has filed for bankruptcy. The second largest printer, Quad, has shut its book printing facilities entirely. In some regions, major distributors have shut down or disappeared, while although others, like Ingram, are still operating, although with reduced staff.

New Releases (DMR Books): The next DMR Books release is The Eye of 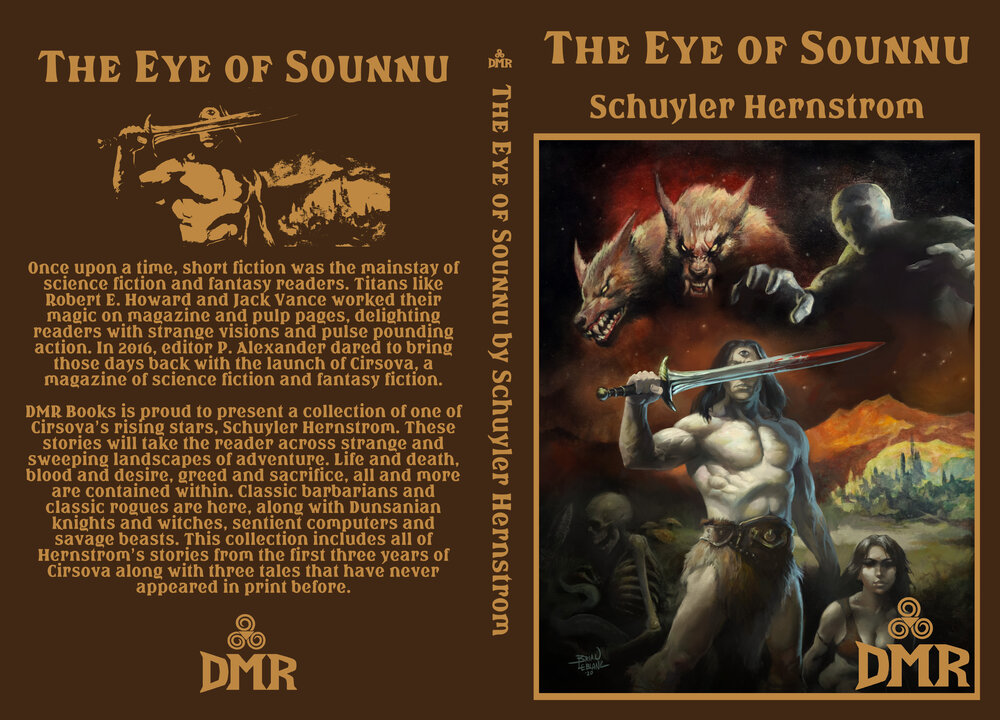 Sounnu, the long-awaited collection of Schuyler Hernstrom’s stories from Cirsova magazine. Today we reveal the incredible cover by Brian LeBlanc (who also did the cover for Renegade Swords.) The title of the collection is taken from the cover story, “Gift of the Ob-Men,” which previously appeared in the first issue of Cirsova, as well as the free anthology The Infernal Bargain and Other Stories.

Hard-boiled Fiction (Elgin Bleeker): The Hammett novel, which I posted

about (here), is a complicated yarn of murder and political corruption. Nick Beaumont is an advisor and right-hand man to Paul Madvig, a political power broker. In the book, Hammett showed the strong ties between the men who were long-time friends. A lot of that was lost in the 1942 movie starring Alan Ladd as Nick and Brian Donlevy as Paul because the story needed to be trimmed down to fit a movie’s normal running time. (There is also a 1935 version starring George Raft and Edward Arnold, but I have not seen it.)

Pulp Science-Fiction (Adventures Fantastic): OK, I’m gonna do it.  With the exception of some of the novels, I’ll be looking at the nominees for the 1945 Retro Hugos, which are awarded for stories published in 1944.  I’m going to start with the novelettes.  I read “The Children’s Hour” earlier this week as a possibility Henry Kuttner birthday post before the Retro Hugo shortlist was announced.  Might as well tackle it while it’s fresh on my mind.

Pulp Fiction (Dark Worlds Quarterly): Edmond Hamilton was a Science Fiction writer who is loved for his Captain Future novels, his Star Kings and any number of other Pulp stories. He was an important innovator of the 1920s and early 30s, as well as one of the best writers of Superman comics in the 1940s, 50s and 60s. But there was this time when Ed wrote Mystery stories for money…Hamilton was one of the first SF writers who tried to make a living writing only Science Fiction and Fantasy. He succeeded for the most part but there were lean years in the Great Depression when he turned to Mystery fiction.

Fiction (Jon Mollison): Is now really the best time to write a post-

apocalyptic novel? It is if you know what you are doing. And as a writer, let me assure you – I know what I’m doing. The sad fact is that we already live in a post-apocalyptic world. Sooner than expected, we’ll be tasked with finding a path out of the relative doom that follows the American Empire. And fiction can help us do that. If it is the right kind of fiction.

Fiction (Track of Words): Black Library’s Siege of Terra series reaches its halfway point with Saturnine by Dan Abnett, a 500+ page beast of a book in which secrets are revealed, big names start to fall, and the stakes – somehow – get even higher. Having taken Lion’s Gate spaceport, the traitor host marches on the fortifications of the Lion’s Gate itself while simultaneously driving at the Eternity Gate spaceport, stretching the loyalist defenders to breaking point. With battles raging on multiple fronts and resources dwindling, Dorn faces impossible questions of compromise and sacrifice, as he searches for a strategy that might tip the balance in his battle of wills and wits with Perturabo.

Warhammer (Warhammer Community): This is Warhammer’s biggest plastic monster yet… it towers over a regular gargant and easily stares Archaon and his three-headed mount in their many faces. It’s festooned with details that mark it as a creature of the Mortal Realms, including trinkets from across the various factions and bits of monster – presumably to snack on after battle.

D&D (Boggswood): Both before D&D was written, and long afterward, Dave Arneson stocked his dungeons randomly and he devised different methods and  applied different ways to do this.  Monsters, for example, he stocked through a random “Protection Point: system.  Gold he rolled dice for and items he created random tables for.  The best early example is his The Loch Gloomen stocking list from 1972, reprinted in his First Fantasy Campaign booklet. 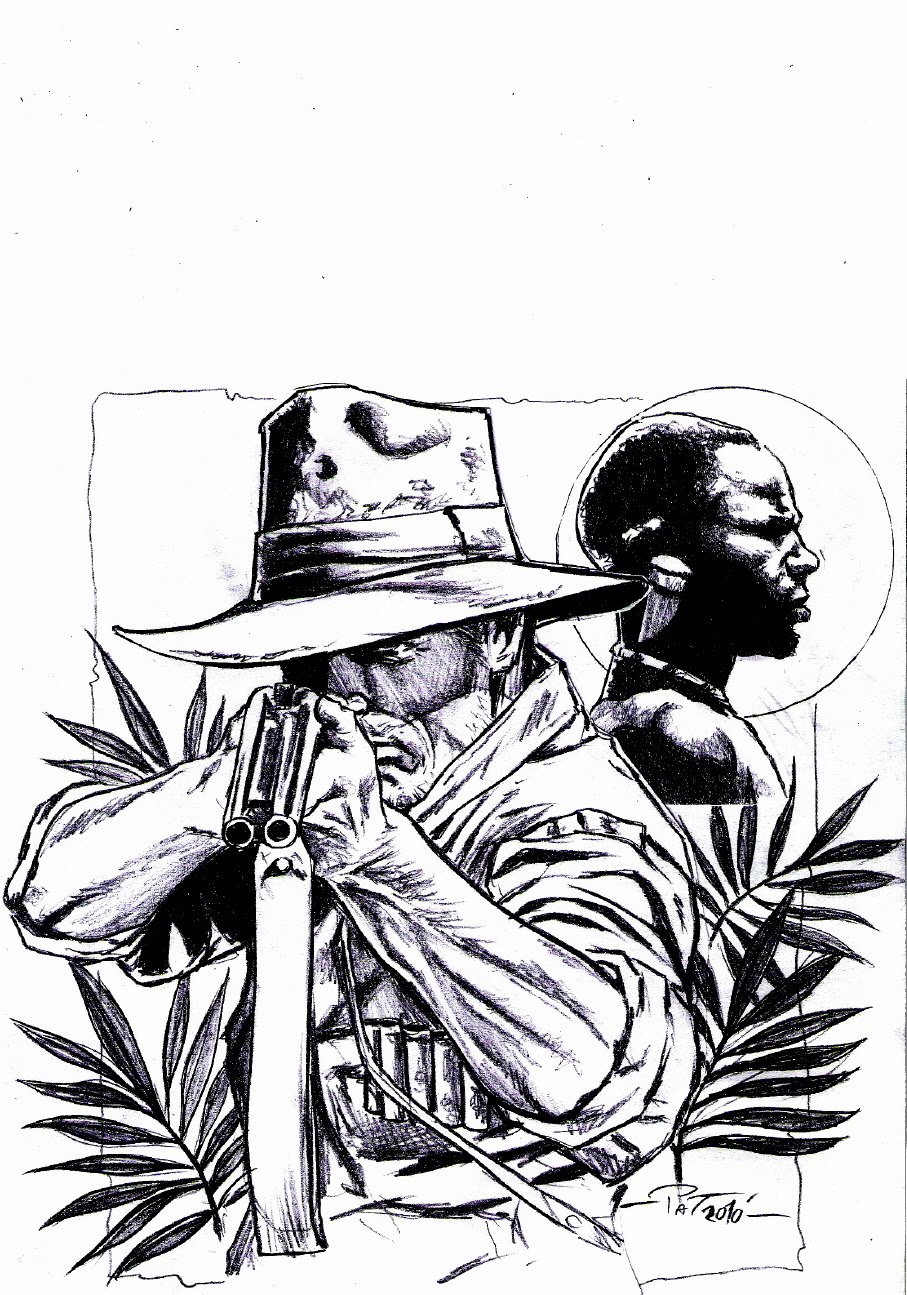 who had worked for several years in Natal in southern Africa, created one of the the quintessential Frontier Partisan heroes of fiction — white hunter and adventurer Allan Quatermain, hero of King Solomon’s Mines and a whole series of what Deuce Richardson calls “exotic adventure fiction.”  A hunter of wild game and hidden treasures; a “Man Who Knows Indians” (or, rather, African tribesmen); an English gentleman by heritage and termperament, yet one who sought out the wild places of the earth to wander. 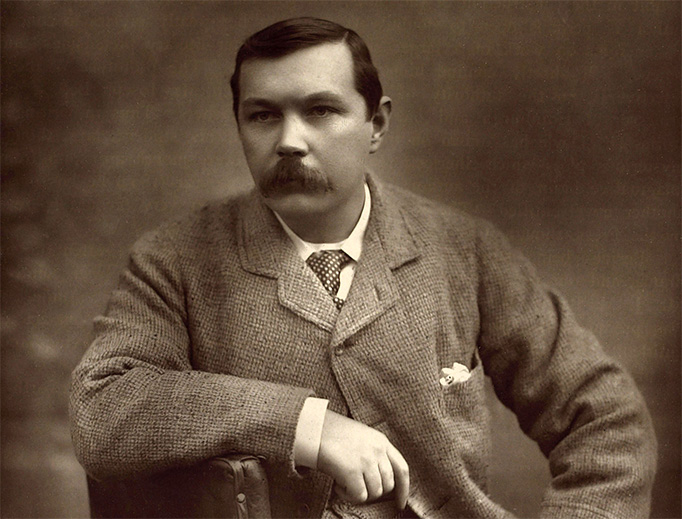 looked down upon me from an impressive Victorian town house. Below a larger than life portrait there was a sign; it announced: “The Sir Arthur Conan Doyle Centre.” I made a mental note, intending to visit what I assumed was a place dedicated to the memory and literary legacy of the creator of one of literature’s most famous figures: Sherlock Holmes. It was then that I noticed another sign. It offered “services” and other activities: the building was a center for spiritualism — necromancy by another name.

D&D (Jeffro’s Space Gaming Blog): I just had no interest in running a game featuring kobolds and goblins like happens so often when you run Keep on the Borderlands by the book. But you know, with three healing spells at first level for each cleric, high powered rangers and paladins holding things down, and with enough money in the game that the fighting-men can afford plate armor now… hoo boy, they can hold their own up against some pretty tough opposition. Tougher opposition means bigger payoffs– a tradeoff that seems quite satisfactory, at least when the players are winning.

New Release (Amazon): A resurrected sorcerer grants the wishes of the 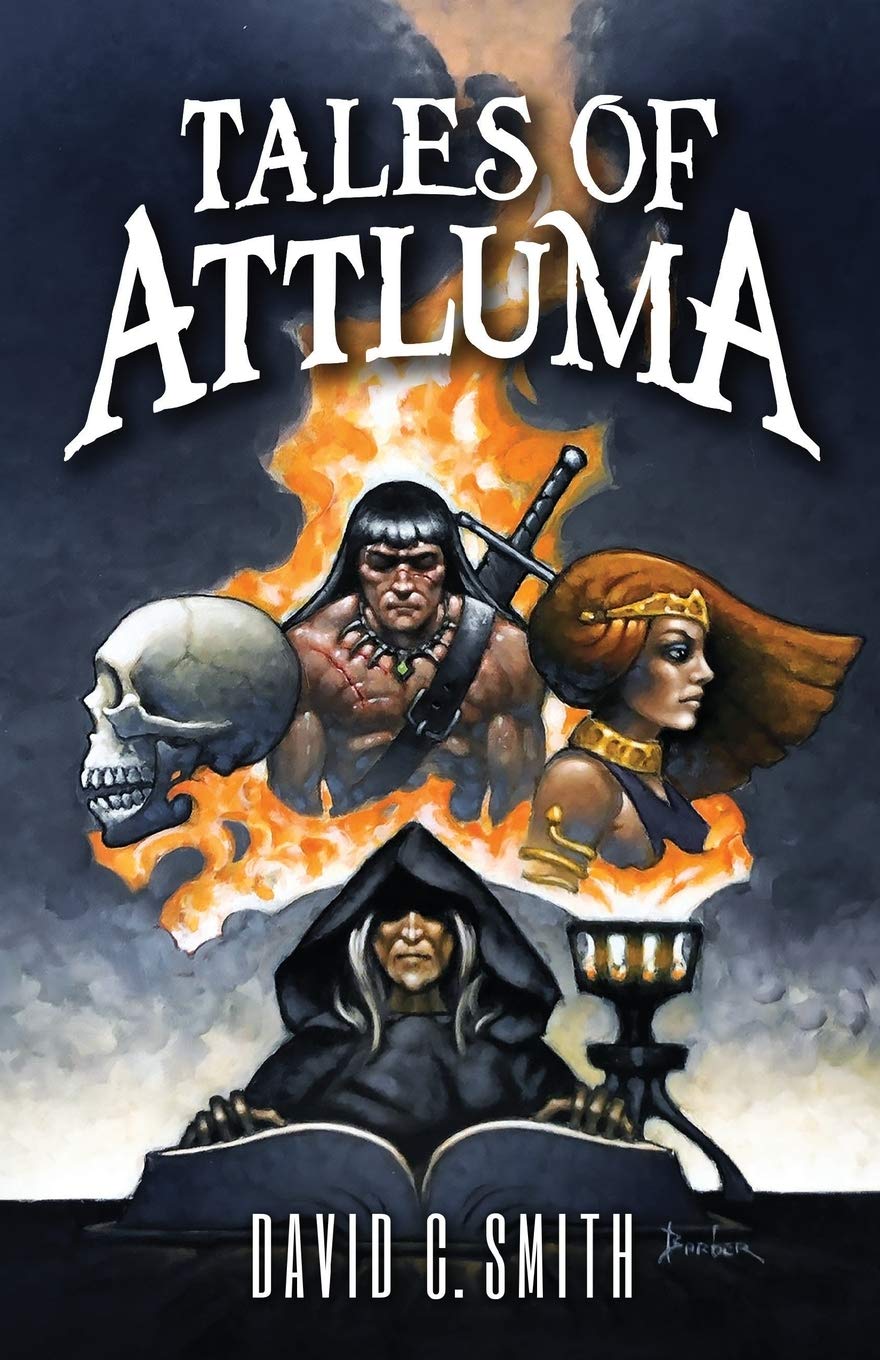 desperate men who have returned him to life—but in ways none of them anticipates. A prince makes a bargain with a barbarian criminal to travel into a lost world of violence and sorcery to save the life of a woman who may already be dead. Marauders who attack a city devoted to a great goddess suffer her strange curse when she answers the pleas of her dying priestess. The last survivors of an ancient continent confront evil at every step as they march beneath skies of endless darkness to reach the haven they hope will lead them to safety.

Art (DMR Books): “Legacy Circle members of the Robert E. Howard Foundation have something to look forward to: The Challenge from Beyond

Drafts. In 1935, fan publisher and future DC Comics editor Julius Schwartz wanted to celebrate the third anniversary of his Fantasy Magazine. He asked five prominent science fiction authors and five prominent fantasy authors to collaborate on two stories, both to be titled ‘The Challenge from Beyond.’

bestselling series. Beginning in 1960, the 17-book series is still held in high regard with fans of the western genre. While Barnabas’ son Jubal is mentioned in these books, it is explained to readers that he was a loner and distanced himself from his family. Jubal was obsessed with exploring the far west and walking “where no white-man had ever wandered”.

Fiction (Fantasy Literature): Of the nine books that I have read over the last year or so from Armchair Fiction’s current Lost World/Lost Race series, 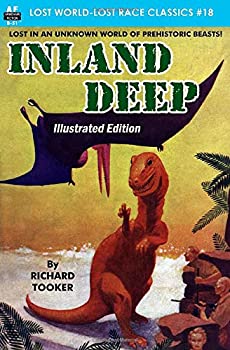 which runs to 24 volumes, no fewer than three of them have involved the discoveries of hitherto unknown civilizations far beneath the Earth’s surface. In Rex Stout’s truly thrilling Under the Andes (1914), three unfortunate Americans go through a hellacious experience at the hands of a lost race of Incas beneath the mountains of Peru. In S. P. Meek’s The Drums of Tapajos (1930), a quartet of American adventurers discovers the descendants of both the 10 Lost Tribes and Atlantis, uneasily coexisting both inside and beneath a mountain in the Brazilian wilderness.

Heinlein (Pulp Net): As a young science-fiction fan, I read several authors, and would often gravitate to a particular author at a time, reading almost

everything they did, before I moved on. Often I wouldn’t follow on their later works. One of these authors was Robert A. Heinlein (1907-88), one of the “grandmasters” of science fiction, and sometimes referred to as the “dean of science fiction.” Like many SF authors of the time, he got his start in the pulps, and was successful in leaving the “pulp ghetto” for better-paying markets, such as The Saturday Evening Post, and original books.