Robert E. Howard (Orthosphere): Considering that he died at thirty, 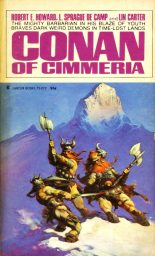 Howard’s literary accomplishments can only impress.  Stylistically, he operates at a level many ranks above that of the typical pulp writer.  His vocabulary includes a rich lode of Latin and Greek derivations and likewise of English archaisms.  Brought up, from age thirteen, in the small and isolated Texas town of Cross Plains, in Callahan County, in the middle of the state, Howard almost miraculously overcame a lack of educational resources and acquired a reserve of knowledge in history, literature, myth, and folklore that would shame the modern holder of a college degree in any of those subjects.

Science Fiction (Wasteland & Sky): Ever since the Pulp Revolution started, the main kickback has always been from the older set who think it exists to erase their past when it exists for the exact opposite. The whole reason the movement sprung up was because of those who began looking into the past and were finally discovering what Fandom was actually doing was rewriting and destroying what came before. They were doing it for their own gain, chasing out anyone who wanted what they had mere years earlier.

Gaming (Monster Hunter Nation): I talked about this in the last blog post about the Yard Moose Mountain Mega Shooting Weekend, where I had shooters from all over the country coming to my place for three days of pistol training, about how one night I ran a one off RPG session for 17 of them, and by some miracle it actually turned out good. When this got posted about on Facebook right after, a whole bunch of gamers asked how the hell do you run a game that big and not have it suck, so here’s how we pulled it off.

Tolkien (Breitbart): “The Tolkien Society has announced that the theme of its 2021 Summer Seminar, held July 3 – 4, will be ‘Tolkien and Diversity,’” reports the Daily Wire. Here’s a sampling of what Woketard Tolkien Fanboys  can expect — you know, those whose lives are so empty, this is how they choose to spend a weekend: Gondor in Transition: A Brief Introduction to Transgender Realities in The Lord of the Rings. Pardoning Saruman?: The Queer in Tolkien’s The Lord of the Rings. The Lossoth: Indigeneity, Identity, and Antiracism.

Robert E. Howard (Adventures Fantastic): This past weekend was the 2021 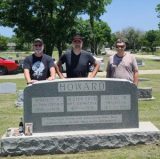 Robert E. Howard Days. After last year’s cancellation, it was a much needed gathering. And while many of the regulars weren’t able to attend, the number of first time attendees made up the difference. The gift shop sold out of almost all the books they had in stock.

Awards (DMR Books): John Bullard is a good guy doing Crom’s work over at the Robert E. Howard Foundation (REHF). The other day, John sent me the list of REHF award recipients for 2020 and 2021, which were announced at Howard Days in Cross Plains a week ago. I should note that Corona-chan canceled last year’s Howard Days, so the 2020 awards were handed out this year. Check ’em out below. I’ll post my comments below that.

9th, 1930 in St. Petersburg, Florida. In the august company of his fellow Appendix N authors, Lin Carter is a figure both of high esteem and some controversy. As an editor and critic, he is indispensable, most notably for his role in editing the landmark Ballantine Adult Fantasy series (BAFS), which ran from 1969-1974 and re-introduced such luminaries as Lord Dunsany, William Hope Hodgson, and Clark Ashton Smith to the fantasy-reading public. 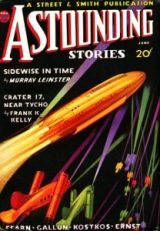 Murray Leinster. An avid inventor who also happened to have a knack for writing wonderful speculative science fiction, his career spanned much of the 20th century. 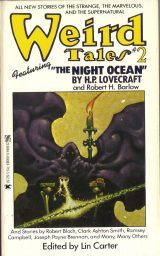 Books published a four “issue” anthology series bearing the title Weird Tales and the stylized logo familiar to fans of the pulp greats who were published in The Unique Magazine. Weird Tales has been called the magazine that never dies, but most would agree it’s had a largely beleaguered existence since the late 1950s. It has appeared at various times in a newsstand digest format, a full-size traditional magazine format, and — perhaps the most successful post-Golden Era run of the magazine — a very nice perfect bound magazine during the 1980s and early 1990s.

Comic Books (National Review): How can you not know who Neal Adams is? He gave the world the modern Batman and Joker! Revived Green Arrow and the X-Men! Created the first Black superhero for DC, the John Stewart Green Lantern!

(Weird Tales, December 1936) by Robert E. Howard is the point at which adventure fiction and horror meet. The story was found in a trunk with a note to be sent to Farnsworth Wright in case of the author’s death. This is according to Glenn Lord who published the first version of the story in The Howard Collector #16 (Spring 1972). Lord gives us a little preamble with:

RPG (Modiphius): We’re delighted to announce that Conan The Adventurer arrives in print! This latest sourcebook for the Conan Adventures in an Age Undreamed Of RPG is available now on Modiphius.net and coming soon to a retailer near you. Here are the details on this fascinating new sourcebook which is also available in PDF format on Modiphius.net and DriveThruRPG.com.

Comic Books (Arche-arc): Upon completing my viewing of the FALCON AND

WINTER SOLDIER streaming series, I’m moved to comment on some of the parallels between Kevin Feige, founder of the Marvel Cinematic Universe, and Stan Lee, the founder of Marvel Comics in its crucial sixties incarnation.

Comic Books (Irmonline): I have gone into the first series run of What If? by Marvel from 1977 to 1984, with 47 issues. The title series continues to

find numerous use over the years with Marvel. There is a second series that starts in 1989 and ends in 1998, with 115 issues including a #0. After that, Marvel releases a few mini-series, or one-shot stories, that go under the title What If?. 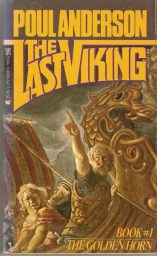 have an interest in the history, and the sagas make for dense but fascinating reading, but my first love is pure, heart-pounding adventure. I remember first learning about Vikings back in grade school, when we briefly covered the Viking explorations of the New World, the discovery of Greenland, Vinland and Viking settlements on the Canadian east coast long before that Italian explorer came along and spoiled everything.

Gaming (Game Rant): Skyrim is packed full of references to the works of H.P. Lovecraft. Its last DLC, Dragonborn, saw the inhabitants of the isolated

town of Raven Rock fall under a mysterious trance-like state that was leading them to build strange obelisks, with only the faintest memory of doing so. While some The Elder Scrolls quests are full of surface-level Lovecraft allusions like this, the series’ metaphysical lore makes the connection explicit. The same can be said for Obsidian’s upcoming first-person fantasy RPG, Avowed. 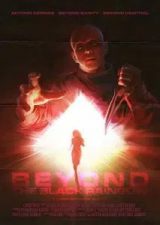 Cosmatos’ Mandy, a film that sort of came out of nowhere a few years ago that in some ways, boosted and reignited Nicolas Cage’s acting career. I don’t think that it was long-lasting but his role in Mandy proved that the dude can still bring it and excel when given the right part in a movie. Cosmatos only has one other film and, at this point, it’s already over a decade old. It’s been in my queue since I saw Mandy, however, so I felt like checking it out was long overdue.

Star Wars (Tor): The Star Wars movies are notable for spinning off into a

wide variety of other media and related products, including TV shows, books, comic strips, comic books, radio dramas, toys, housewares, and other products. Since the series was largely modeled on the old Flash Gordon and Buck Rogers serials, this is no surprise, as both of those properties were also adapted into a variety of formats and merchandise, something George Lucas certainly noticed and emulated. Today, I’m going to look at two of the first Star Wars tie-in books, Splinter of the Mind’s Eye and Han Solo at Stars’ End.

Pulp (Fantasy Literature): The Universe Wreckers initially appeared as a 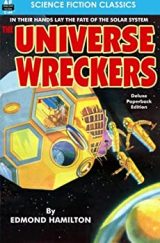 three-part serial in the May, June and July 1930 issues of Hugo Gernsback’s Amazing Stories magazine, the first publication to dedicate itself solely to science fiction. This legendary magazine started publishing in 1926, the same year that Hamilton’s very first story, “The Monster-God of Mamurth,” appeared in Weird Tales, when its author was 22. The Universe Wreckers would then, sadly, go OOPs (out of prints) for over 80 years, until Haffner Press resurrected it for inclusion in one of its mammoth Hamilton anthologies.

Gaming (Arkhaven Comics): Last month, IGN decided that the hill to die on this week was Palestine.  They printed some article on giving aid to 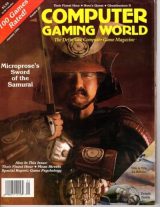 Palestinian Children* that I didn’t care about and didn’t read because I haven’t read anything from IGN for years and I wasn’t starting now.  However, IGN Israel did read it and screamed at the corporate owners. Ziff-Davis roused itself from its dreamy lassitude and made the accurate but surprising decision that this article had nothing whatsoever to do with gaming or popculture and spiked it.

Derleth Christmas Card,” I touted an unexpected find I made in a local antique store: a series of unique Christmas cards issued by Wisconsin’s famous author — and close friend of Allied Authors — August Derleth. Unexpected, because even in his home state, Derleth’s proverbial backyard, such finds are fewer and farther between, with his fame continuing to grow.

an inexpensive format. Along with full-page scans of original art, this features an introduction by Annie Gaines Ashton, exhibit introduction, and twelve short essays or personal recollections from noted EC fans. There are also four double-page enlargements of art, three successful and one blurry. The scans are mostly clear with a few soft or blurry issues.

Review (Rough Edges): There’s no sophomore jinx for the second issue of 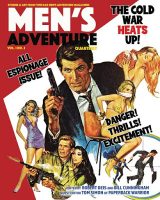 MEN’S ADVENTURE QUARTERLY. It remains one of the most impressive, beautifully designed publications available today. The theme this time around for this oversized trade paperback is Espionage. It features a lot of vividly reproduced artwork, including both covers and interior illustrations, from a variety of the Men’s Adventure Magazines published in the Fifties, Sixties, and Seventies, along with seven stories (mostly fiction, even the supposedly true ones) from those magazines.

unpublished novel The Thin White Line ended up in the hands of producer Euan Lloyd, it fit perfectly with his ambitious plans to make a grand-scale star-studded war adventure film in the vein of Where Eagles Dare. The novel toyed with the rumor about a mysterious 1968 plane landing in Rhodesia allegedly carrying a mercenary force, and when screenwriter Reginald Rose adapted it for film, director Andrew V. McLaglen was hired to bring it to life based on a decisive recommendation from the great John Ford. The cast was loaded with heavy-hitting names such as Richard Burton, Roger Moore, Richard Harris, Hardy Krüger, Stewart Granger, Jack Watson, Frank Finlay and many others.