of art from King Conan #2 following criticism over a controversial portrayal of a character with a name related to the Native American historical figure, Pocahontas. Last month, Marvel and writer Jason Aaron and artist Mahmud Asrar were heavily criticized for naming an oversexualized character Princess Matoaka, a name with ties to the real-life Pocahontas.

Tolkien (Bounding Into Comics): Prolific comic book writer known for his long runs on Batman, Detective Comics, and the Punisher recently shared his opinion why he believes what Amazon is doing to Tolkien and The Lord of the Rings is an abomination. Dixon, who also adapted Tolkien’s The Hobbit into comic book form, sat down for an interview with European Lore, where he was asked his opinion on the current state of film and television adaptations.

Paleontology (All Thats Interesting): During the Pleistocene era some

11,700 years ago, South America was a hotbed of giant predators, among them the Smilodon populator — one of the biggest cats to ever walk the Earth. Scientists knew that these saber-toothed predators were massive in size but nothing could have prepared them to discover just how gargantuan these cats could get.

Authors (Belfast Telegraph): Best-selling thriller writer Henry Patterson has died at the age of 92. Patterson, known to the public under his pseudonym Jack Higgins, published 85 books during his lifetime. He died at home in Jersey, surrounded by his family, his long-term publishers HarperCollins said in a statement. Patterson is best known for the 1975 novel The Eagle has Landed about a fictional plot to kidnap Winston Churchill during World War Two. 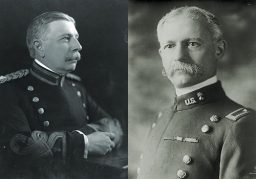 Thompson was the son of Army Lt. Col. James Thompson. Despite a childhood spent moving from post to post, John decided to follow in his father’s footsteps. He graduated 11th in West Point’s Class of 1882 and was commissioned a second lieutenant in the 2nd U.S. Artillery.

Cinema (Collider): One of the most highly anticipated films of the year is Robert Eggers‘ Viking epic, The Northman. Eggers himself has commented on working hard throughout the production to maintain an elevated level of accuracy and intensity. The film follows Alexander Skargård as Amleth a Viking prince on a quest to avenge the death of his father King Horwendil (Ethan Hawke). Amleth spends his life dedicated to the following mantra: “I will avenge you, father. I will save you, mother. I will kill you, Fjölnir.” 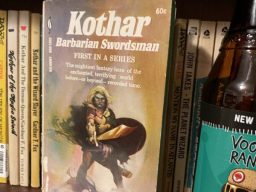 Swordsman. The title sums it up nicely. The book is a collection of three Kothar novellas. We get a sort of origin story, in which Kothar acquires his sword Frostfire, the introduction of his nemesis Red Lori, and some fast paced adventures, all prefaced by an excellent introduction from Donald MacIvers, Ph.D. I’ve written about Kothar before. 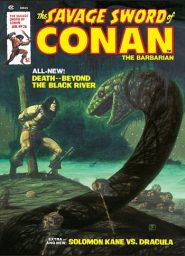 Conan (Sprague de Camp Fan): “Beyond the Black River” first appeared in two parts in the May and June 1935 issues of Weird Tales. It was reprinted in King Conan, Gnome Press, 1953. It is the third and last story in Conan the Warrior, Lancer Books, 1967. There are some textual differences between the Weird Tales, Lancer, and Ballantine (Del Rey) versions. As in previous stories most are minor.

Musings (Brain Leakage): The storytelling trope I hate most is that the hero needs a personal reason to get involved (“Refusal of the Call,” if you wanna get all Campbellian about it). ​It’s such a prevalent trope, it even works its way into genres where it isn’t traditionally needed. One of the biggest culprits? Modern detective stories and crime thrillers. As Weird Fiction author Misha Burnett once pointed out, there’s a trend in modern detective stories for saddling the protagonist with some personal loss or trauma that drives them to catch killers.

Games (DVS Press): Shadow Warrior 3 is a game that epitomizes everything, both good and bad, about modern games. It’s a beautiful-looking game, full of color and a complex Asian-inspired aesthetic, and it runs extremely well for all its fidelity, maintaining a smooth 60fps on the PS5 during all but the most chaotic, explosive moments.

Fiction (Jeffro’s Space Gaming Blog): Okay, you know you need to get in on this. We’re talking about Sky Hernstrom’s phenomenal Mortu & Kyrus stories. In a nutshell, these are pretty much in the spirit of Fafhrd & The Grey Mouser but dropped into The Dying Earth and written by Robert E. Howard. All those years where I said, “don’t read anything before 1980”?? All those times I felt that NOBODY was able to write anything even half as good as what I came across doing Appendix N? I was wrong.

Fiction (With Both Hands): Lead the Way is the sixth book in the Forgotten 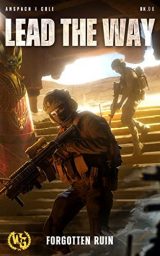 Ruin series, and it hits all the right notes that make this series my current favorite. I was tempted to say this might be the best entry in the series yet, but it is really hard to top the wild magic that characterizes the eponymous first book Forgotten Ruin.

Robert E. Howard (Grognardia): If much of 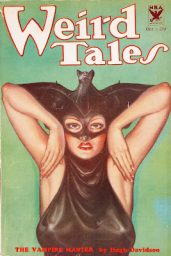 contemporary discussion of pulp fantasy literature is to be believed, there are only two kinds of these tales: ground-breaking stories that transcend their origins or worthless hackwork without any enduring value. I mention this because of the story I wish to bring to your attention today, Robert E. Howard’s “The Pool of the Black One,” which first appeared in the October 1933 issue of Weird Tales.

Fiction (Silver Key): I have said I wanted to review more modern sword- 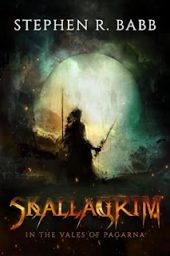 and-sorcery written by contemporary authors, and so stepped up to that promise with Skallagrim: In the Vales of Pagarna. The author is Steve Babb, a name that you might recognize as one of the founders of the progressive rock band Glass Hammer. Steve is a sometime passer-through of my blog, someone I’ve mentioned here before. This is his debut fantasy novel, which published this month.

Comic Books (John C. Wright): Sorry for rambling. My point is that comics used to be good, and any child, or adult not dead to childlike wonder, could read about heroic heroes, including poor workaday schlubs and schnooks and common folk with common problems like Peter, who, despite being unrewarded, unloved, libeled, and battered, continues the fight.

Tolkien (Aleteia): According to the website Brain Pickings, “In the summer of 1952, sixty-year-old J.R.R. Tolkien encountered a tape recorder for the first time [and]…So enchanted was Tolkien with this novel technology that he proceeded to record himself reading much of his work over the years to come.” A reader of that website compiled many of these recordings and shared them with Brain Pickings, which posted them online for all to enjoy.

New (DMR Books): In May DMR Books will release the anthology Terra 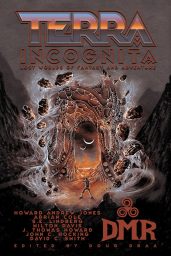 Incognita: Lost Worlds of Fantasy and Adventure. This project was masterminded by Doug Draa, editor of Weirdbook Magazine. Doug assembled an all-star team of writers, including David C. Smith (author of Oron, The Sorcerer’s Shadow, and the Red Sonja series), Howard Andrew Jones (editor of Tales from the Magician’s Skull.

D&D (Walker’s Retreat): To no one’s surprise, Palladium entire product line readily conforms to the True Campaign model. This is because (with the exception of RECON), all other Palladium RPGs are derivative on Kevin tinkering with Gary’s ruleset because he didn’t like or grok what Gary was doing. This is how The Mechanoids and The Palladium Fantasy Role-Playing Game came about.

Science Fiction (Goodman Games): Not many authors can be credited with

changing the entire trajectory of a genre, yet Stanley Grauman Weinbaum managed to do so with his very first published science fiction story A Martian Odyssey. The story first appeared in the July 1934 issue of the science fiction pulp magazine Wonder Stories, which was a distant third in popularity to Astounding Stories and Amazing Stories. 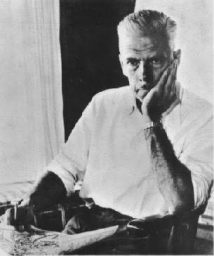 Authors (DMR Books): Harold Lamb passed on sixty years ago today. My time is short, but I feel that respects must be paid. I wrote a couple of reviews of the Bison Books Lamb collections for The Cimmerian back in the day. I’m still proud of them. I know Howard Andrew Jones was pleased with them and that means a lot.

D&D (Working the Night Shift): Again, today is a good day for this one.  I just 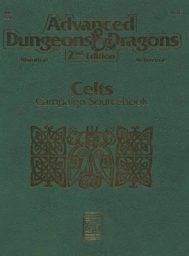 Review (Porpor Books): Here at the PorPor Books Blog, we like to celebrate St. Patrick’s Day by reviewing or showcasing a fiction or nonfiction book that deals with Ireland and the Irish. For St. Patrick’s Day 2022, our selection is ‘Darby O’Gill and the Good People’ by Herminie Templeton Kavanagh. Kavanagh was born in the UK in 1861 and later migrated to the United States, where she wrote stories for children based on Gaelic folklore.

Science Fiction (Marzaat): “The Keeper”, H. Beam Piper, 1957. This story was published in Venture Science Fiction’s July 1957 issue. It’s the story in Piper’s Terro-Human Future History set furthest in the future. It mentions the Fifth Empire, and no other story in that series is set past the Third Empire.

Science Fiction (Adventures Fantastic): One of the things Henry Kuttner 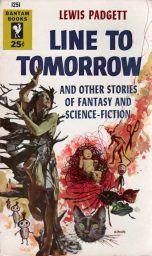 excelled at was the dark, sardonic twist at the end of many of his stories. Another thing he excelled at was time travel stories. Often in the same story. We’ll look at one of these today that he wrote in collaboration with his wife C. L. Moore that was published under their pen name Lewis Padgett.

D&D (Hidden in Shadows): Was there an ancient, technologically advanced civilization in Blackmoor? Tavis Alison wrote a piece a long while back on the Apocalypse Trope in D&D, and in that article he mentions the gigantic pipe organ found in the original (1975) Temple of the Frog.  The pipe organ was Steve Rochford’s (Saint Steven) idea, but one that Arneson happily ran with.

winning a total of seven Academy Awards including Best Actor, Picture, Director and Screenplay. The film, starring George C. Scott – who controversially turned down the Oscar because he did not recognise acting competitions – examines the controversial life of General George S. Patton. Taking an approach commonly found in many of today’s biopics, the film focuses on a short period of Patton’s career: from his entry into the North Africa conflict where he faced off against Erwin Rommel, through to his victorious sweep into Germany at the end of the war. 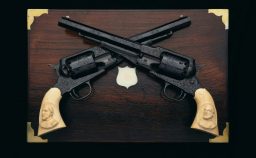 Firearms (Last Stand on Zombie Island): The above is a matching set of Remington’s New Model Army revolvers, with ornate work from iconic Master Engraver Louis D. Nimschke. Serial Nos. #1 and #2, they were presented to Maj. Gen. Ulysses S. Grant in the latter half of 1863 or early 1864, as he was transitioning from leading forces in the West, facing foes such as Beauregard, Pemberton, Bragg, and Johnston, to setting up shop with the Army of the Potomac on the center stage of the Civil War in the brutal Overland Campaign, facing Lee.