Writing (Wasteland & Sky): Action, movement itself, is essential to a pulp tale. The story must get in, get out, and say everything it can in as few words as possible. Because pulp writers had to hook the audience quickly they had to pack as much as they could into magazine guidelines. Even though they paid by the word, if a writer didn’t cut the flab editors would just print another story in its place. Sharpness is essential; sluggishness is death.

Fiction (Pulprev): ‘Dark’ is an oft-seen descriptor for books, comics, movies, games and television shows these days. These media are usually packed with violence, swearing, sex scenes and the like. But does that really make a story dark? As I made my way through old runs of the Punisher — specifically the MAX runs, the runs filled to the max with violence and gore and obscenities and random sex — I must say that the answer is no.

Comic Book Business (Walker’s Retreat): Diamond, the distributor with a monopoly on American comics distribution (and handling boardgame and tabletop RPG, etc. stuff also), has ceased taken product. This includes DC and Marvel. The American comic shop scene, already on fire, just had gasoline poured on it.  I cannot care less. The collapse being spoken of in the above video is a part of the larger collapse of the Western entertainment business, which is a rotten zombie corpse now experience a failure cascade as its putrescence reaches critical mass and body parts start falling off.

of two magnificent novels by Tim Willocks: The Religion and The Twelve Children of Paris. In the first, Willocks flings his hero into the cauldron of the 1565 Great Siege of Malta, when the Ottoman Empire made a bid to destroy the knights of St. John, to extend their maritime power to the middle of the Mediterranean Sea and threaten Italy.

Science Fiction. After several years working in London–including several covers for the UK war comic, Commando–Ken decided to seek greener pastures in the US of A. From 1968 to 1974, he did quality work at DC, crafting war comics under the editorship of the legendary Joe Kubert. Meanwhile, Ken was doing outstanding cover art for the Warren Magazines: Eerie, Creepy and Vampirella.

Appendix N (Swords and Stitchery):  Robert E.Howard’s Kull stories are as important if not more so then his Conan tales. The fact is that Kull goes

from slave to king speaks volumes about the progression & dangers of the world of pre-cataclysmic Atlantis c. 100,000 BC. Why do I love the series?! Because Kull’s fate is completely uncertain. We never learn what happens to him. He’s swallowed up by Robert E. Howard’s literature output. To me this  Atlantean kings fate is completely unknown &  this is the way it should be.

Fantasy (Superversive SF): I remember ordering this book from Scholastic 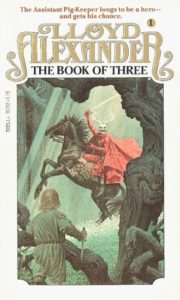 or Troll, one of the elementary book clubs. Oddly, it sat on my book shelf for a couple of years before I read it. The same thing happened with THE DARK IS RISING. Why remains a mystery to this day. After I got my first computer (a Tandy 1000 EX) and the game BLACK CAULDRON, I realized that the villain on the cover of this fantasy book was the same Horned King as in BLACK CAULDRON.

SFWA (delarroz.com): It’s come to my attention that the group of pedophile supporters formerly a science fiction professional organization is having an election for their board. The best part of all of this is their organization has become such a shit show under Mary Robinette’s nonsense — they didn’t have enough people filing for the elections to fill the positions. It’s hilarious. 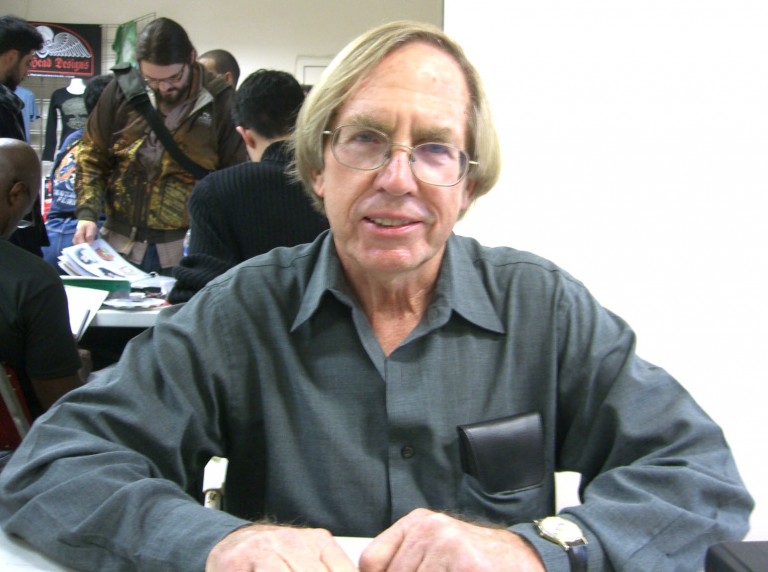 magazine called Alter Ego. It’s a subject the 79-year-old Show Me State native knows well because he helped make it. And he’s still at it. Thomas served as Marvel editor-in-chief, but he also helped create and develop Wolverine (Adamantium, the metal in his skeleton is Thomas’ idea), Vision, Luke Cage, Ultron and other characters. He’s penned stories for both Carol Danvers (a.k.a. Captain Marvel) and D.C. favorites like Wonder Woman.

Monsters (Dark Worlds Quarterly): Jack Williamson wrote The Legion of Space for F. Orlin Tremaine’s Astounding Stories, April-August 1934. In that novel a group of brave Earthmen face off against a cruel race of aliens called the Medusae. These creatures are hideous to look upon: “John Star had glimpsed one of the Medusae on Mars, that thing in the gondola swung from the black flier, whose weapon had struck him down. A swollen, greenish surface, wetly heaving; a huge, ovoid eye, luminous and purple. But these were the first he had fully seen.

RPG (Akratic Wizardry): Some dramatic news out of Cubicle 7:  We have 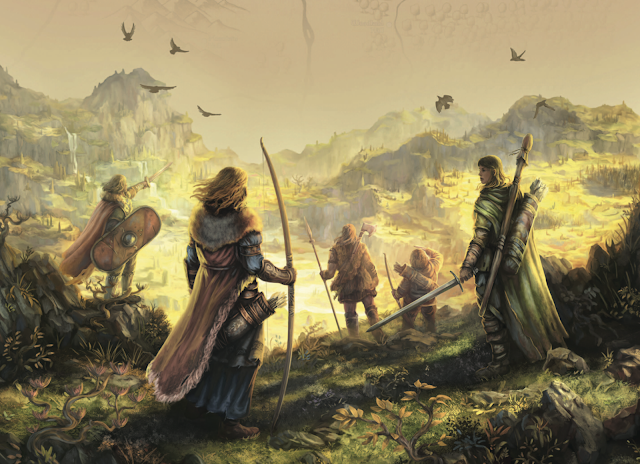 some very unfortunate and unexpected news to share. Contractual differences arose recently which we have been unable to resolve, and so we have decided to end our licensing agreement with Sophisticated Games. It is with regret that we have made this very tough decision to withdraw. This means we will cease publishing The One Ring and Adventures in Middle-earth™ in the first half of 2020.

RPG (Goodman Games): We’ve mentioned this in the past, but now we’re 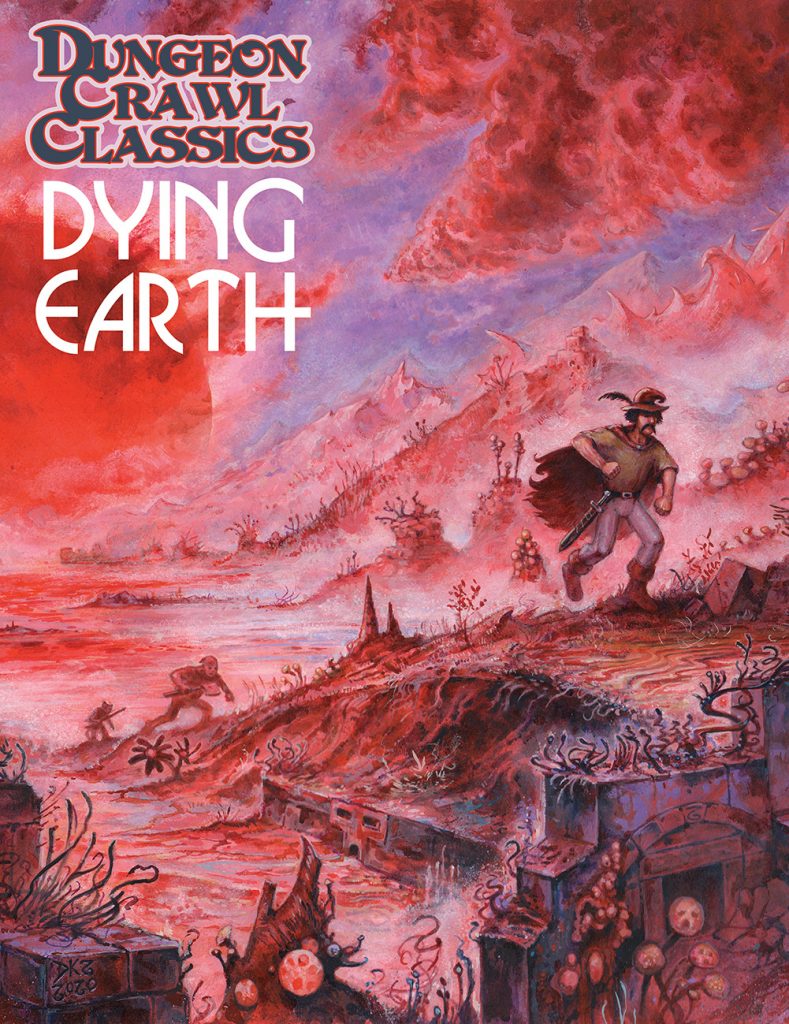 making it official. It’s time to visit The Dying Earth. We are very excited to officially announce DCC Dying Earth, based on the works of Jack Vance. Officially licensed by his estate, the Kickstarter will launch later this year and the product will release in 2021. DCC Dying Earth is both a sourcebook and a setting for the Dungeon Crawl Classics Role-Playing Game that offers a portal to the singular world of The Dying Earth novels by Jack Vance.

under their Wade Miller pseudonym, Bob Wade and Bill Miller drafted some engaging thrillers and mysteries for Fawcett Gold Medal and other publishers all through the 1950s and into the early 1960s, before Miller’s untimely early death. Their writing was tight and spare, yet immersive, and they knew how to quickly hook readers into propulsive plots. Their settings sprang vividly to life, and they were capable of subtle and even nuanced character development and dialogue.

Cinema (Jon Mollison): Panfilov’s 28 on the other hand provides everything a guy could want in a war film.  A plucky band of brothers serve as the last line of defense standing between the German mechanized juggernaut and Moscow herself.  I can’t recall a single actress in the entire film, which revolves around how men bond and fight as much for the man next to themselves in the trench, and how they reconcile themselves to death as a hopeless gesture of defiance.

Writing (Andrew Knighton): How do we turn the past into stories? It might sound like a simple question, but the relationship between stories and real events is complex and messy. The Nature of History       Last week, I received editorial comments on a history article I’m writing. High on the to-do list was making the article into more of a story. As soon as I read that, I knew what they meant, and I knew that they were right. I also knew why I hadn’t done it the first time around.

RPG (Walker’s Retreat): Most tabletop RPG designers are incompetent. They are incompetent because they do not understand the medium that they work within, but instead operate off of a Cargo Cult mis-comprehension of Dungeons & Dragons and are reacting entirely against the Straw Man they’ve built up in their minds over time. The proof of this comes when they see things like Jeffro Johnson’s Twitter threads spelling out what Gary Gygax put down and what this means when put into practice.