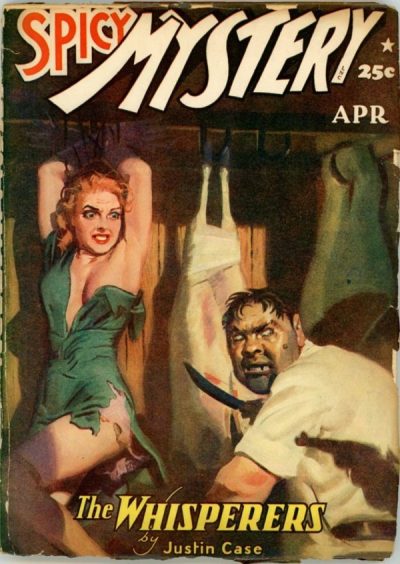 Is Something Happening? Is Something at Stake? (Not Pulp Covers) The Diabolical Miss Hyde — “But what about the actual cover image itself? Why is it so boring, and what could be done to make it better? The obvious answer is to show some action, something happening. This is the classic pulp cover technique. Show someone being threatened or fighting or being carried away or attacked by a leopard or whatever. Planet Stories was particularly fond of this style of cover. See? Much less boring! They are fighting aliens and tentacles! Of course you want to read it!”

Appendix N (Playing at the World) Spellcasting before D&D in Midgard — “The Midgard spells are derived from Jack Vance — though this does not mean that magic in Midgard was ‘Vancian’ in the memorization sense familiar from D&D. What it does mean is that Vance’s Dying Earth spells with names like the ‘Excellent Prismatic Spray’ and ‘Phandaal’s Mantle of Stealth’ became part of the Midgard system way back in the summer of 1971. “Prismatic Spray” would not enter the D&D lexicon until Aronson’s ‘Illusionist Additions’ in The Dragon #1, five years later.”

Why We Can’t Have Nice Things (Cirsova) Kirkus Withdraws a Review (and that’s a big deal!) — “Originally, Kirkus gave a positive review for Moriarty’s book. It was apparently even reviewed by a Muslim woman who ‘is an expert in children’s &YA literature and well-versed in the dangers of white savior narratives’, and ‘she found that American Heart offers a useful warning about the direction we’re headed in as far as racial enmity is concerned.’ So, ironically, Kirkus has chosen to silence a Muslim woman because people disagreed with her review. They’ve backpedaled and thrown up this new review calling the book problematic.”

Comics (Gaming While Conservative) A Man Ahead of His Time — “It might be literary shovelware rammed out the door faster than Weinstein chasing an underage actress with a gaping hole in her heart where a father should be, but if you want to see the future of anti-SJW comic books, and wrapped up in a hot pink sausage wrap bursting with fatty goodness, you can find it here. Right here in the pages of this third masterpiece written by the man who inspired all the copycats out there with their 40,000 subscribers and successful Freestarters and kids who respect them and good hygiene regimens. I don’t mind them standing on my shoulders. Maybe the shuffle of their feet as they do their victory laps will help keep the dandruff flakes from accumulating.”

Comics (Walker’s Retreat) Narrative Warfare: Alt-Hero Is Where The Superhero Comic Action Is Now — “That’s the sort of superhero that DC and Marvel used to be openly proud of publishing, because both companies knew their markets and–being competent at business–marketed to it good and hard. That is still the superhero comic audience, which is why Rebel (imagine Daisy Duke as a superheroine) hit like the fist of an angry God.”

Traveller (Tales to Astound) Classic Traveller Rules In Action, But Not In Space — “I handed out an index card to each player for characters: ‘Assign the values 4, 5, 6, 7, 8, and 9 to STR, DEX, END, INT, EDU, and Social Status. Add +2 to two of those, or a single +4 to one. Give yourself a profession and write that on the top of the card. You character can do all thing things that that profession can do. Then add three more skills, the things you are really good at, which might tie to your profession or be something else. Assign a +1, a +2, and a +3, respectively to each of the skills as you see fit. Tell me who your character cares about in the village. Tell me about the god your character pays homage to. Give your character a name.'”

Adventure Design (Ten Foot Pole) Dungeon Magazine – Final Retrospective — “Dungeon Magazine is an abject failure in this regard. It is VERBOSE. Mountains of backstory, mountains of room text. All of it fights the DM running it at the table. If you are including something in the main text then it has to be directly useful for play. If it’s not then it needs to be removed or moved to an appendix where it can be ignored. Dungeon Magazine didn’t do this. It reveled in useless detail. A LONG room description that describes a trophy room, all of the trophies and accomplishments, and then ends ‘but it was long ago looted and now nothing remains but dust.’ Backstory, history, detail that doesn’t apply to play, a verbose writing style … these were the hallmarks of most Dungeon Magazine adventures.” 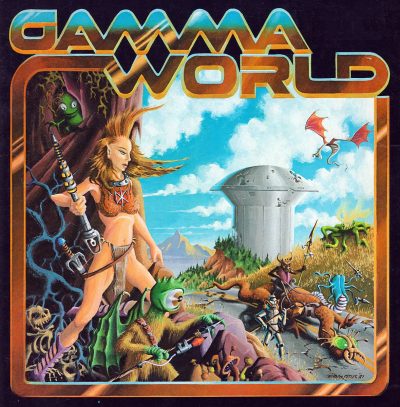 RPGs (Cyclopeatron) Erol Otus’ Gamma World — “My personal favorite approach to Gamma World, however, is best illustrated by Erol Otus’ illustrations in the first edition supplements. Beautiful technicolor weirdness more along the lines of early Heavy Metal and Epic Illustrated magazines than Saturday Morning cartoons. In particular, look closely at Otus’ colorful ref screen illustration. The sky is clear and blue – not a dark and gritty scene at all. Green tress, mountains, dragons, mushrooms. I like the punked out warrior babe with the Dead Kennedys amulet and the crazy techno-wand – I want to be her friend. The mutants are really weird and fantastic. Soooooooo awesome! I’ll take Otustown over Bartertown any day!”

The Pulps (Erotic Mad Science) Appendix C: Mayor LaGuardia Loses It — “There are so many accounts of New York City mayor La Guardia’s infamous explosion upon seeing a particular Spicy Mystery cover in 1942 — and so much impact on the shudder pulp industry attributed, probably falsely, to the incident — that it seems sensible to accumulate all of the anecdotes in one place for comparison and contrast of details. It’s worth pointing out that the the shudder pulps in general were well into their terminal decline at this point and that any fallout or follow-through from this incident would not have been La Guardia’s first attempt at censoring pulp magazines in NYC; those began at least as early as 1934.”

From the Comments (Kairos) Space Opera vs. Mil-SF — “Most authors don’t do as Mr. Walker says (and why I don’t tend to read much of the genre) is because they’re still operating under the Silver Age mentality that SF is separate from Fantasy and romance of the old definition. To get a truly wondrous old fashioned Space Opera story, there has to be a shift in mindset away from the Silver Age and toward the superversive. What I got from reading Galactic Patrol is nothing I have ever gotten from any other Space Opera novel and that is because Smith had a love that almost transcended the page.”

Comics (Electric Lit) What Wonder Woman Meant to Her Earliest Fans — “However, redemption usually only came for white villains. The Japanese Princess Maru reoccurs frequently as a non-repentant foe, and Yasmini, an Egyptian princess, dies rather than reforming. No matter the gender of the opponent, non-Western cultures in Wonder Woman often match the sensitivity of Mickey Rooney’s role in Breakfast at Tiffany’s. Racist lingo, like ‘Nip,’ jars the modern reader during any battle against the Japanese. Marston was far from the only comic or cartoon purveyor to use such language during the time period. The exoticism of the villains is both exploitative and audience-driven. After all, as comic books began to replace pulp magazines, they offered a cheap version of escape. Wonder Woman not only served a patriotic cause with its red, white, and blue spangles, but served to feed into the idea of American exceptionalism.”

The Dung Age (The Emerald City) Have I gone off fantasy? — “I hate to name particular examples, since a book that did nothing for me might be your best-beloved, but one that I can’t resist dissing is The Girl of Fire and Thorns. As well as my least-favorite titling trend, A of B and C, this features a pseudo-religion that completely misrepresents the purpose of prayer, a character arc that seems designed as an advertisement for a weight-loss regimen, and a magic spinning belly-button jewel (???). Oh, and a scene in which the heroine uses a sheepskin to start a fire. Apparently the author did not know that wool is naturally flame-resistant and that this would be quite difficult to do with a tinderbox.”

Books (Vintage Novels) The Daughter of Time by Josephine Tey — “By now, almost seventy years after it was written, The Daughter of Time is recognised as one of the great detective stories of all time, and must have created thousands of passionate Ricardians (or so Richard III’s current-day apologists are called). And yet, it somehow does this while defying a whole heap of tested story conventions. The stakes, for instance, are low to nonexistent. There are no villains lurking in the corners of Inspector Grant’s hospital room, and he’ll suffer no more than a slight injury to his pride if he fails to vindicate Richard. The case is cold, and I don’t believe the scene ever shifts out of Grant’s hospital room, where he lies in bed looking at books and his ceiling and having conversations with occasional visitors. It’s not what you’d expect to form the raw material of a gripping detective yarn. And if Josephine Tey was such an avid Ricardian, you’d expect her to write a weighty non-fiction tome instead of trying to shoehorn all the evidence and scholarly debate into a light detective novel. And yet she does it.” 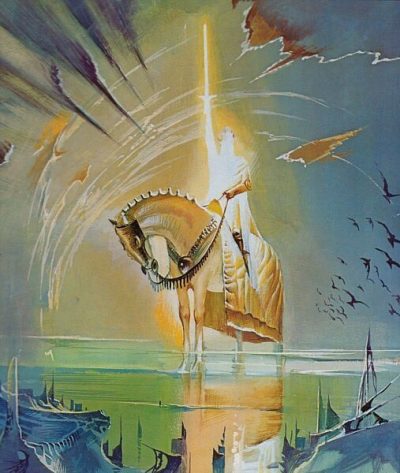 Rewrite All the Things! (Tor.com) Star Trek, Harry Mudd, and the Power of Personal Narrative — “These jokes are a product of their time, to be certain. The nagging wife, the cad who can’t seem to pass a day without doing something illegal, the eternity lambasted by the specter of a woman left behind. But the question that no one seemed to ask was simple enough—was Harry telling the truth about Stella at all?”

D&D (Black Gate) The Expedition Into the Black Reservoir: A Dungeon Adventure at Greyhawk Castle by Gary Gygax — “The story appeared in the fanzine El Conquistador in 1975, and runs about four pages. The title is ‘The Expedition Into the Black Reservoir; A Dungeon Adventure At Greyhawk Castle’ and was authenticated by Gary himself as being a story he wrote to promote the new game, Dungeons & Dragons, which is also advertised in the same issue. The issue also ran a review of D&D, along with another article by Gygax elaborating the idea and themes of D&D. This story has never been re-published, and as far as I know is perhaps the first ever Greyhawk-specific short story ever published. It is also very rare, having been published in a small-print run zine having to do with play by mail Diplomacy and wargaming campaigns. Gary said that he no longer has a copy either, having donated it to WOTC a few years back along with other personal items he had.”