T.V. (Book and Film Globe): Any book, film, or program with Lovecraft in its 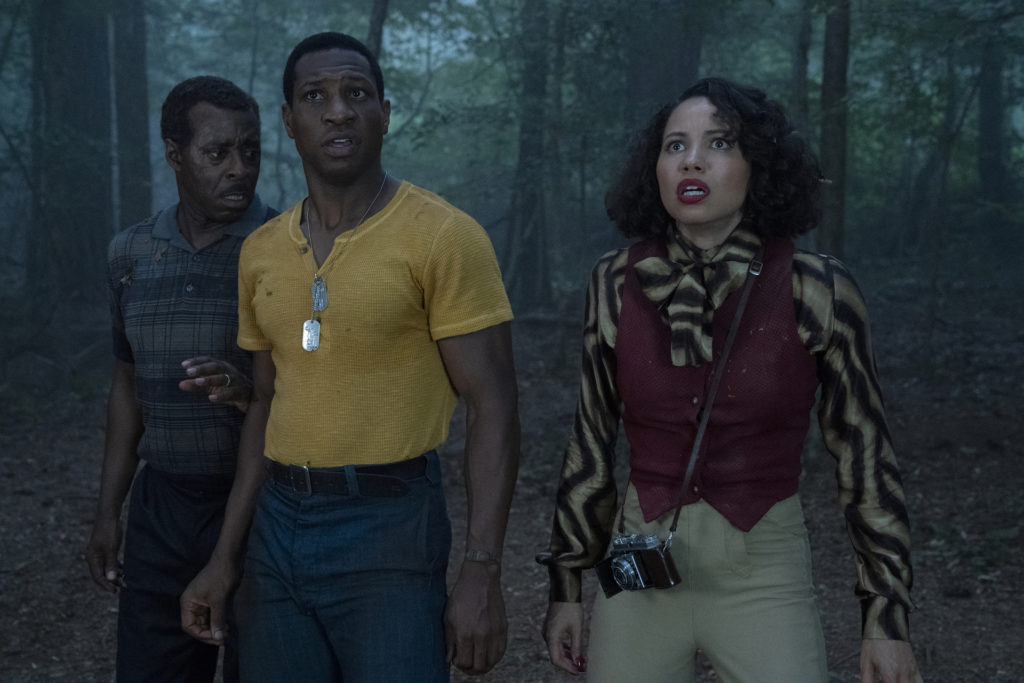 title raises certain questions. Good and authoritative books, articles, and movies exist. But there is so much misinformation, ignorant commentary, character assassination, and blatant misappropriation—so much garbage—that one looks uncertainly at new works, wondering on which side of the divide they will land. Lovecraft was a complex man and a challenging writer about whom many have made and continue to make galling and ghastly mistakes, and those who purport to analyze and explain Lovecraft, or works about or inspired by Lovecraft, are often the worst offenders.

Gaming (Walker’s Retreat): This is reference to Balder’s Gate 3, currently (laughably) in Early Access on Steam despite being a full-priced AAA game. It’s based on D&D 5th Edition, so we have wokeshit on top of wokeshit involved, and yet–when users are allowed to be anonymous–they prove yet again what they picture as Ideal Hero Material: Le Straight White Guy. Not just that, but Mr. Square-Jawed Hero.

Dune (DMR Books): Of course, Herbert’s novel, Dune, is why most of us care

that this is his centenary. While he was not a one-hit wonder, exactly, the vast majority of Herbert’s success and acclaim flowed from that one novel. But what a novel it is. I reread it for the third time a few years ago. Just as I felt the first time I read it–barely starting high school–this was Burroughs’ “Mars Trilogy” on steroids.

Games (Wargamer): Dune is unique among science fiction works in that it

creates a society whose military has some profound limitations and at first glance appears to be hopelessly backward. Interstellar warriors fighting with swords would appear at first glance to be an oxymoron. Yet these limitations ironically are the result of the advanced technology of defensive force shields. While it may take the reader a while to get used to some of these concepts, Dune warfare is logical and makes perfect sense within the limits set by shield technology.

Fiction (Dark Worlds Quarterly): A Night in the Lonesome October is a 1993 novel by Roger Zelazny. Some Octobers I like to play a game with it. The book is a day-by-day account of the life of Snuff, the guardian dog of Jack the Ripper. One of Snuff’s jobs is to keep an eye on the Thing in the Wardrobe and the Thing in the Steamer Trunk. And other Mythos style monsters. The whole thing is the most superb love letter to horror fiction and cinema. Zelazny works in material from horror masters like Mary Shelley and Bram Stoker as well as lots of Arthur Conan Doyle and Victorian London, modern masters like H. P. Lovecraft and Robert Bloch and even the dog writer, Albert Payson Terhune who created the penchant for collies.

Game Miniatures (Cirsova): One of the things we did with our Mongoose

and Meerkat project with Jim Breyfogle was create D&D stats for a few of the stories so they could be run for B/X. Something I’d love to do for a future Kickstarter would be include some minis for Mangos and Kat. The idea had me playing around with HeroForge, which is a site that allows you to create custom one-off minis for tabletop.

Tolkien (Frontier Partisans): I must note that October 6 carries another 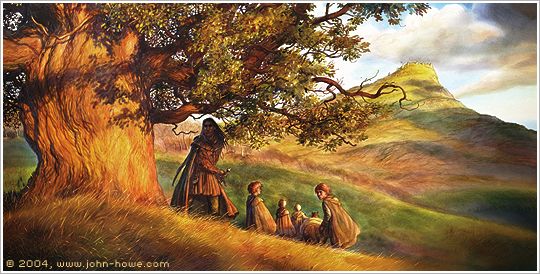 significance, this one in the legendarium of J.R.R. Tolkien. The date marks the anniversary of the attack on Weathertop, as depicted in The Fellowship of the Ring. I think Tompkins would relish the dual acknowledgement. In addition to his appreciation of REH, Tompkins also honored the legacy of Professor Tolkien, and he braided those assumed-to-be-disparate-but-actually-kindred legacies in the wonderful essay The Shortest Distance Between Two Towers.

among fans of weird horror fiction that H.P. Lovecraft spent an inordinate amount of time writing letters, collaborating with other writers, and revising/editing their in-progress works. In 1936, they year before his death, Lovecraft assisted with the manuscript of his friend, young R.H. Barlow (1918-1951), a budding writer who entered the fabled “Lovecraft Circle” when he was only 13. 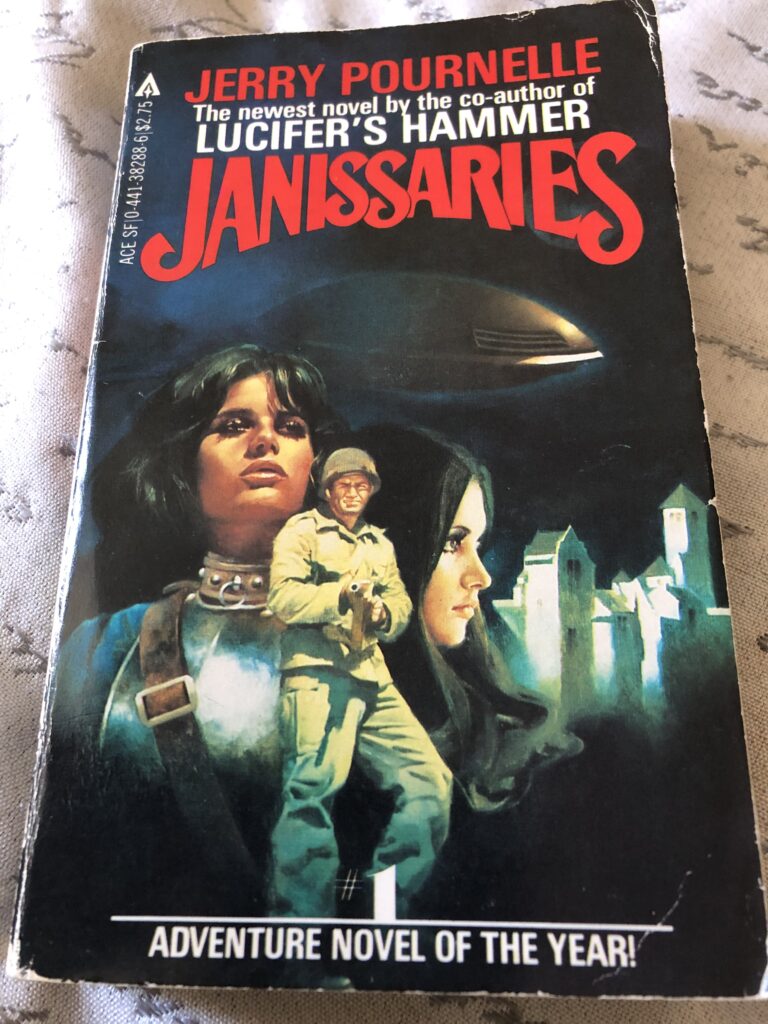 in 1979. I was ten. My copy is the 1982 edition. So I probably first read this in ‘82 or ‘83 in my early teens. I’ve gone through it and the sequels a couple of times. Now I’m starting again, preparatory to reading the final, posthumous volume, Mamelukes (hoping a paperback edition will be available by the time I finish rereading the initial books.) The book specifically calls out the H&K rifle. (The interior illustrations seem to suggest Ruger Mini-14s, but the text trumps the artist’s interpretation. 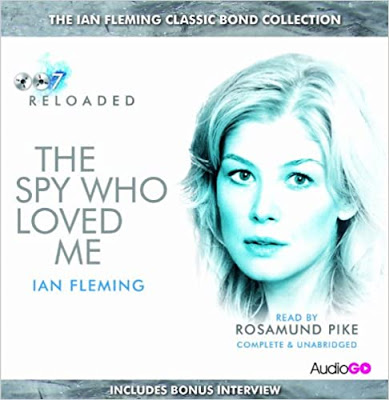 lived incarnation of AudioGO) released a new set of James Bond audiobooks under the branding “007 Reloaded.” It was a project spearheaded (I think) by Lucy Fleming, niece of Ian Fleming, but better known to me as the actress who plays Jenny in Terry Nation’s Survivors. Each book was read by a different prominent British actor, including Dan Stevens (what’s-his-face in Downton Abbey), Bill Nighy (you know who he is), Jason Isaacs (Captain Lorca in Star Trek: Discovery.

D&D (Grognardia): I’m not ashamed to admit that, when I first started playing Dungeons & Dragons, I barely recognized the name of Dave Arneson. Certainly, his name appeared prominently on the inside front page of the Basic Set I first owned, but, for some reason, it never really registered with me. That probably has something to do with the fact that, in the pages of Dragon and elsewhere, Gary Gygax was the spokesman and face of all things D&D.

Hammer—one of the preeminent archetypes of the private detective—is back on the streets of the Big Apple. Spillane started the novel in the 1970s, but eventually abandoned it, uncompleted. In 2006, half a decade after his death, Spillane’s close friend and collaborator, Max Allan Collins, completed the book. As Kiss Her Goodbye begins, Hammer is in Florida. He’s been away for a year in semi-retirement after a deadly shootout with a mob boss.

Fiction (Fantasy Literature): Today, more than a century after Jack 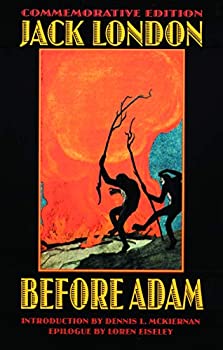 London’s passing in 1916, most people probably remember the San Francisco-born author for his books of rugged adventure, such as his third novel, The Call of the Wild (1903), his fifth, The Sea-Wolf (1904), and his seventh, White Fang (1906). Fewer will recall that amongst London’s 23 novels, 21 short story collections, three memoirs, three plays, 22 books of nonfiction and 45 poems – all written during a life span of only 40 years – this most superhumanly prolific of authors also produced four books that must be classified as either fantasy or sci-fi. 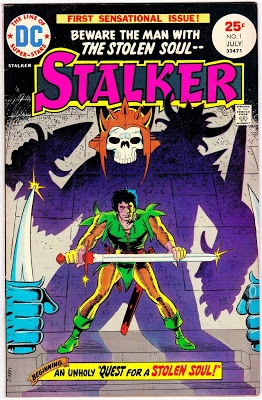 ): The 1970s were a time of both great instability and great creativity at DC Comics, with new characters being created at a rapid pace and then discarded just as swiftly. This was particularly true of those characters created to capitalize on the growing popularity of sword-and-sorcery themes and concepts, few of whom lasted more than a handful of issues.

History (Weapons and Warfare): The Wars of the Roses were part of a common north-western European phenomenon of internal political conflict and civil war in the second half of the fifteenth century. The kingdoms of the Atlantic seaboard were all part of an interlocking cultural, commercial and political network, which meant that what happened in one had important repercussions for the others. Thus events in England were watched closely on the continent, and vice versa.

Fiction (Benespen): I was recently asked by a friend for book 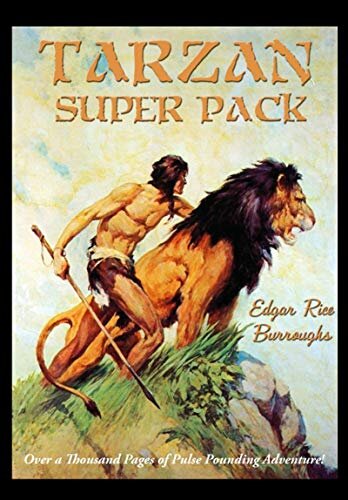 recommendations for a nine year old with a middle school reading level. No sex, but some violence. Series are nice. I can help with that! I thought it would be an interesting cross-section of American juvenile adventure fiction over the last one hundred years or so to reproduce my list here.

Fiction (Tentaculii): If one wanted to start on Derleth ‘as an entertaining fiction writer’, where would one start?  Here’s what the landscape looks like to me, after a short survey: Science-fiction: August Derleth’s science-fiction collection is all in a book called Harrigan’s File, and below are Archive.org links to the tales, in the order of appearance in the book.

Fiction/Cinema (Kairos): In keeping with my recent penchant for reviewing lesser 80s and 90s classics, I took the occasion to rewatch 1987’s camp 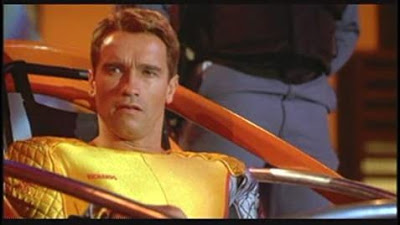 dystopia actioner The Running Man. Based on a Stephen King novels published under his Richard Bachman pen name and adapted for film by the screenwriter of Commando and Die Hard, The Running Man  is chiefly remembered as a piece of distilled 1980s kitsch. The movie is currently enjoying something of a reappraisal, since the view outside most urbanites’ windows is now indistinguishable from a television screen that’s playing the film.

with a love of comics and a burning desire to be a comics artist. At nineteen, he cold-called the mighty Gil Kane, who had just lost his assistant to a heart attack. Gil gave him the job. Kane did not mince words, telling Howie that his art was crap. Despite that, Chaykin had this to say about his mentor:     “He was the single most important male influence in my life.”

Tolkien/Art (Grognardia): I don’t think it’s in the least bit controversial to acknowledge the pivotal historical role Ace Books played in releasing their 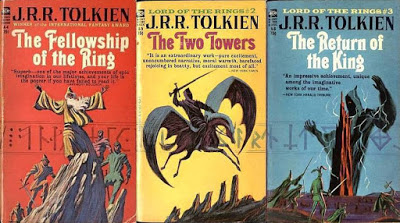 unauthorized editions of J.R.R. Tolkien’s The Lord of the Rings. Briefly, Donald A. Wollheim (who would later go one to found DAW) discovered a loophole in then-current copyright law which enabled Ace to publish a US edition of the three volumes without having to pay royalties to Tolkien. This unauthorized edition was only in print for about a year but it sold enough copies to raise the profile of both Tolkien and fantasy more generally in the United States.

Art (Grape Fruit Moon Gallery): One of the most intriguing and spiteful 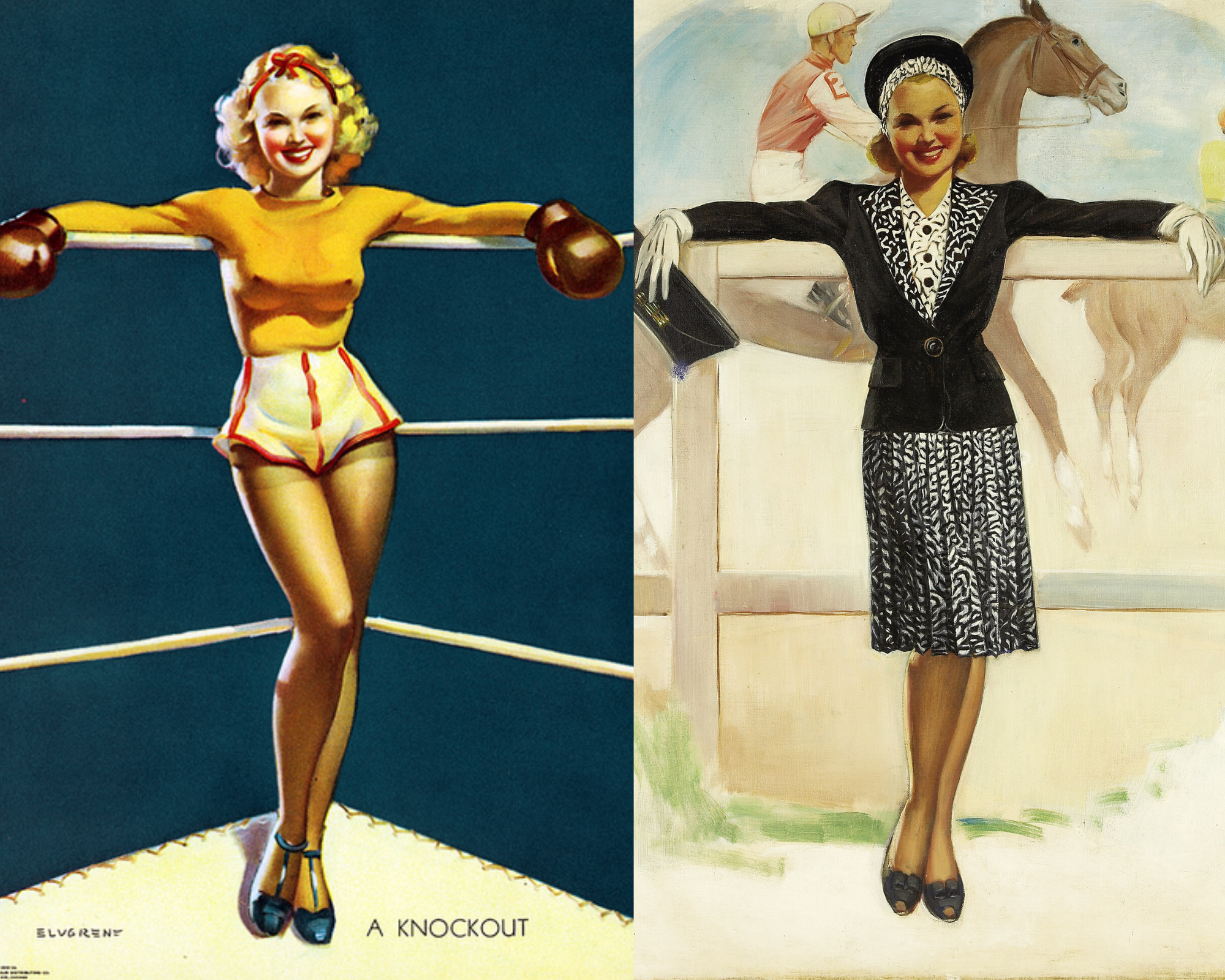 episodes in the history of American pin-up art came out of the competition between Brown & Bigelow and Louis F. Dow, the two largest calendar companies in the United States in the 20th century. Both were based in St. Paul, Minnesota and their rivalry led to an arms race in printing, promotion, and talent acquisition of commercial artists.