Authors (CBC): The man was buried in June. Staff from the graveyard stood respectfully at his grave on a little hill near a forest. His coffin was covered in earth. A small numbered plaque on the ground recorded his grave’s location. But his name was not marked on the grave. The man’s name was Charles R. Saunders. In an extraordinary twist of fate, an author whose fiction was celebrated by legions of fans across North America, had died unknown and been buried in an unmarked grave.

Fiction (Goodman Games): Bran Mak Morn emerges out of Howard’s fascination with the Picts – but not the Picts of modern, sober archaeology – rather the Picts of turn-of-the-century pseudo-scientific conjectural anthropology, the sort of thing that was available for a young Howard to read. But that, believe it or not, is a good thing: for the Picts that captured Howard’s imagination are a mysterious people with a strange past rooted in lost continents, trans-world migrations, and civilizations long vanished. 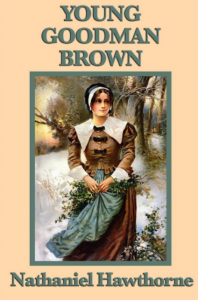 Fiction (Jon Mollison): I’ve taken a turn toward looking into the subject from which my early literary teachers tried so hard and yet to subtly to steer me away.  Part of this arises from an October desire to read more pre-1940’s horror, which naturally leads to works such as Washington Irving’s The Legend of Sleepy Hollow (1820) and Rip Van Winkle (1819).  The quality of writing in those works – and to be fair, these were also required reading in the 1980s – impressed me enough as an adult to seek out additional fare.

Gaming (Walker’s Retreat): Below is an interview between former World of Warcraft devs. Kevin Jordan, like Mark Kern, is a Vanilla-era dev that stuck it out longer than that. Chris Kalenki just left in the last few weeks. The interview concerns Blizzard, WOW, and the corporate culture change over time into its current degenerate state. It’s movie-length, so feel free to watch it in chunks if you don’t want or have the time to spend in one go. 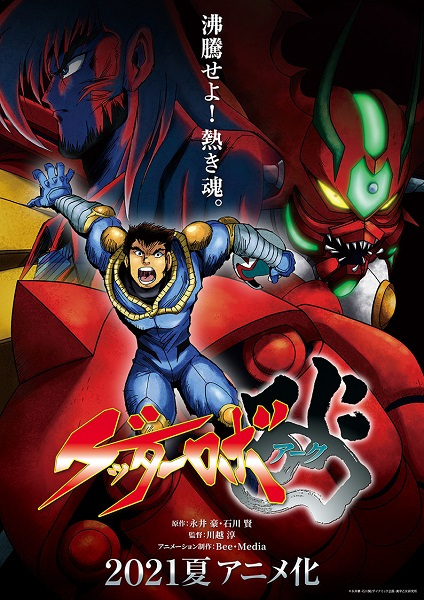 Anime (Wasteland & Sky): 2020 was not a great year for a lot of things, but it also wasn’t particularly great for anime. Aside from some new seasons of older series there wasn’t really much to talk about. The originals were few and far between and the ones being raved about were mediocre at best. Even those older series with new seasons were fairly limited in that there was merely a handful of them. Just like everything else, and for various obvious reasons, the year didn’t produce a sizeable amount from bigger studios. Suffice to say, there just wasn’t much in the way of anime in 2020.

Game (Tentaculii): Nice to see a new Lovecraftian videogame that’s a rare thing… a roaring success when first released. At least, a success judging by the spoiler-packed reviews. “Call of the Sea is solid adventure with tons of atmosphere [and] shrouded in mystery and easy to dive into. […] it’s hard to ignore just how challenging and charming the title is.” (The Escapist) 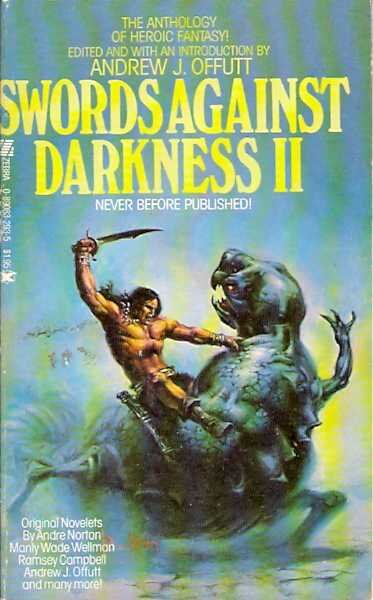 Fiction (DMR Books): Campbell’s tale, “The Changer of Names”, featured his S&S hero, Ryre. Ryre was a barbarian-ish mercenary in the Conan mold, but with subtle differences, just as Ryre’s world of Tond differed from the “standard” Hyborian Age. The tale itself made an impression on me because, despite obviously being a story in the Howardian S&S mold, it had the horror track dialed way up, moreso than the other stories in S.A.D. II.

Review (Amatopia): I’ve never read a book by Jon Mollison I haven’t enjoyed. Whether it’s fun sci-fi or intense sword-and-sandals action, Mollison delivers the goods. The sci-fi noir of Neon Harvest is no exception. Set on an unnamed off world colony planet in an unnamed city that feels like 1980s crime-riddled Miami, Neon Harvest has the day-glo vibe of The Miami Connection (minus ninjas) with the noir sensibilities of The Big Sleep. It’s a compelling and wholly unique aesthetic that totally works.

Fiction (Every Day Should Be Tuesday): My journey through Edgar Rice Burroughs’ Barsoom novels (and my Vintage SF Month 2021) continues with Return to Mars.  Return to Mars collects Barsoom books 4-6: Thuvia, Maid of Mars; The Chessmen of Mars; and The Mastermind of Mars.  The three together manage to exceed ERB’s first three Barsoom books.

RPG (Lord Matteus): I decided to take a look at the Barbarian class as a potential class option for my future players. First, I’m going to get this out of the way: I dislike that some kind of “rage” feature is limited to the barbarian. I think that is silly. When I look at the potential combat options available to a warrior, I think raging is an option for a well-armored knight, just as much as it is for a dude wearing a bearskin loincloth. It seems that in 5e games the barbarian class is typically seen as an adventurer from a primitive culture who just gets mad and proceeds to hack things apart with a battle-ax, a two-hander, or maybe a broken table leg. I find that kind of one-note. One of my more creative players reimagined the barbarian as a soldier with post-traumatic stress disorder, which was cool. 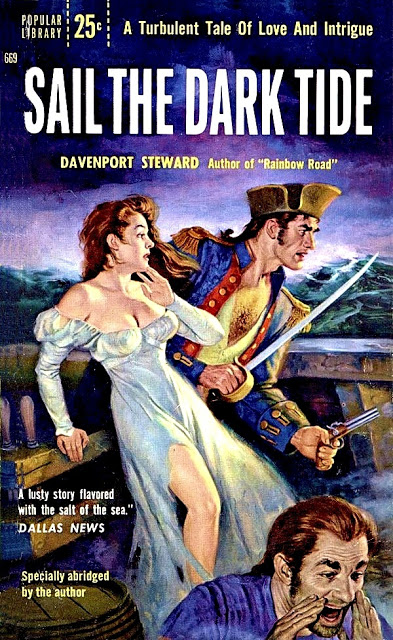 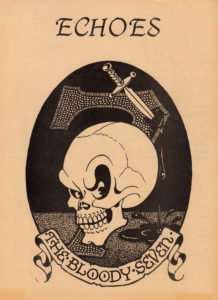 Fanzines (The Pulp Net): The fanzine Echoes ran from 1982 to 2002, before the advent of print-on-demand changed pulp fan publishing and helped ushered in the current New Pulp era. It was published by the late Tom Johnson with his wife, Ginger, and is probably the longest-running pulp fanzine. It came in at the right time as the long-running Xenophile had ended. Echoes first started off as a “special issue,” sometimes referred to as #0 in April 1982.  I only have a scan of that issue. 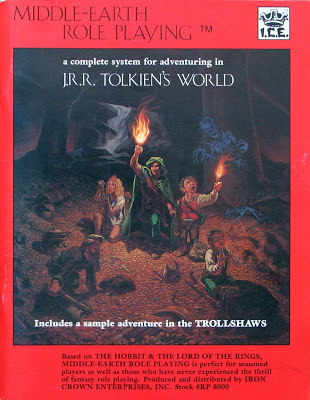 RPG (Grognardia): Originally published in 1982, Middle-earth Role Playing is an odd game. As the cover of the first edition proclaims, MERP is “a complete system for adventuring in J.R.R. Tolkien’s world,” that system being based on Iron Crown’s Role Master system, with which I was already somewhat familiar. Had I been asked beforehand, it’s not the system I’d have chosen for gaming in Middle-earth, but I doubt I could have explained why at the time.

Pulp (Dark Worlds Quarterly): Fredric Brown (1906-1972) was a master of two genres: Mystery and Science Fiction. The fact that he wrote both often blended story material for he wrote mysteries with a weird edge. His SF was sometimes a Mystery as with his novel, What Mad Universe, where a man is trying to figure out what crazy reality he has wandered into. Long story short, there is no point in separating the two sides of Brown. He is best appreciated in his entirety. 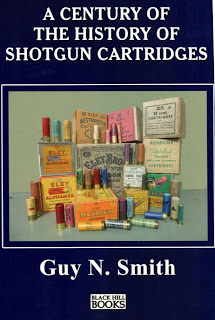 Firearms (Tom McNulty): I received this book just a few months ago, and I had been meaning to post a review. I’m posting it now as a continuation of my tribute to Guy’s memory. I know this project meant a great deal to Guy. We talked briefly about his love for collecting shotgun shells, and of his hunting activities. A worthy addition to the sportsman’s library. 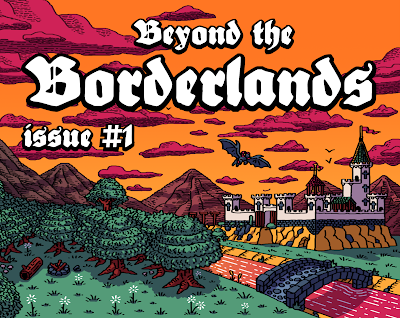 Fanzines (R’lyeh Reviews): Beyond the Borderlands Issue #1 is a fanzine of a different stripe. Published by Swordfish Islands LLC (but also available in PDF from the author), best known for publishing Swordfish Islands: Hexcrawl Adventures on Hot Springs Island, it is a systems neutral regional hexcrawl inspired by B2 Keep on the Borderlands, most recently implemented by Goodman Games’ Original Adventures Reincarnated #1: Into the Borderlands. It is the first part of a trilogy which will explore the overland region in this the initial issue, then the underground areas in the second issue, and lastly provide the bestiary for the previous two issues. 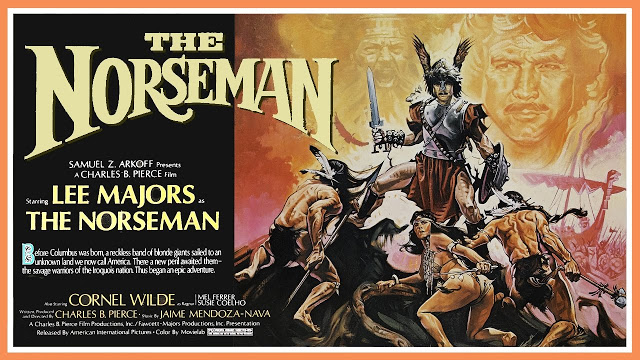 Cinema (New Iron Age Blogspot): I have generally avoided reviewing some of the more notoriously bad films that burst out in the wake of the success of Conan the Barbarian in 1982.  There were a lot of shoddy attempts to cash in on the trend of oiled-up musclemen with European accents cavorting through cheap sets full of bikini models with feathered hair, and I have no particular desire to go through and skewer trash like Ator, the Fighting Eagle.  That said, I thought this one might have a bit more interest to it.  The Norseman came out in 1978 – before the barbarian surge – and was an attempt at actual historical fiction.  Turns out it is still embarrassingly terrible, but sometimes life is like that.

Fantasy (DMR Books): The first subject is an early medieval setting – popularly known as the Dark Ages. With a Roman or high medieval background for a story I find everything is quite sharply demarcated, defined and established; Constantinople falls there, Augustus wins Philipi here and so on and so forth. There’s very little room for me to tinker with it. In my mind, putting a giant into, say, 15th century England or a dragon into 2nd century Rome is just as unthinkable as inviting yourself to a party of strangers; clumsy and awkward, not to mention terribly gauche.

Cinema (Art of Manliness): Few figures in history have had as powerful an impact on American masculinity as the cowboy. While the mythologization of the cowboy began all the way back in the late 1800s with dime novels and Wild West shows, it wasn’t until the advent of twentieth century cinema that the cowboy cemented his place as an icon of manliness. In the same may the myths of the Greeks and the legends of the Vikings espoused certain ideals and inspired men of the past, Western films contain lessons in heroism, epic adventure, and meditations on the line between good and evil. 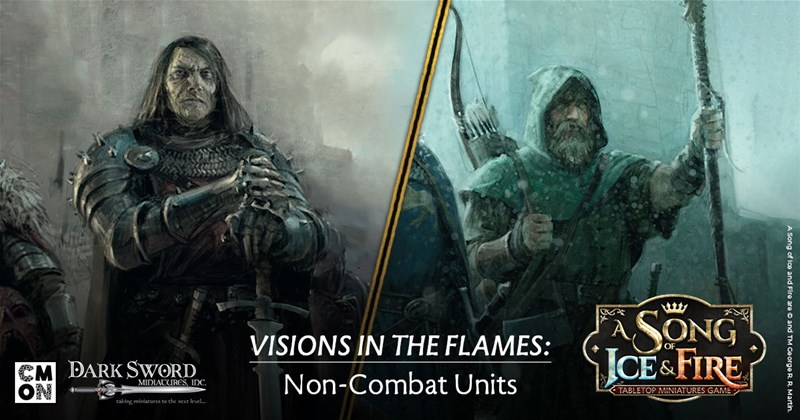 Minatures (Table Top Gaming News): NCUs are a unique aspect of the A Song of Ice and Fire: Tabletop Miniatures Game where models are set aside from the battle, but still have an effect on the conflict through their placement on the Tactics Board. However, the mechanic isn’t perfectly balanced as the designers would like. In this preview of upcoming changes, game designer Fabio Cury takes a look at how some NCUs will be changing soon.