Comic Books (Paint Monk): If you think I worship at the proverbial altar of 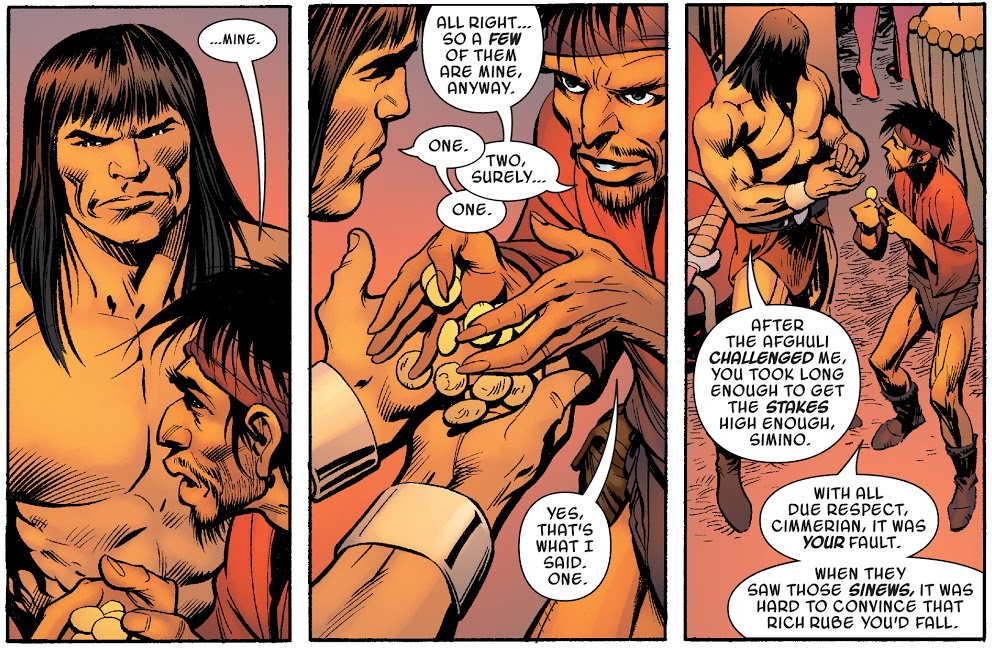 Roy Thomas when it comes to Conan comic books, you’re right. I do. But it’s not undeserved. Not only was Thomas the man who worked to bring Conan to Marvel, but he also took his time with character research, developing all the nuances of the Cimmerian and making sure the Hyborian Age was portrayed by the most capable artistic staff the House of Ideas could muster (within budget, of course)! He scripted the initial run of Conan for the first 115 issues.

Sales (Cirsova): I don’t know that I’ve mentioned it here, but we have made 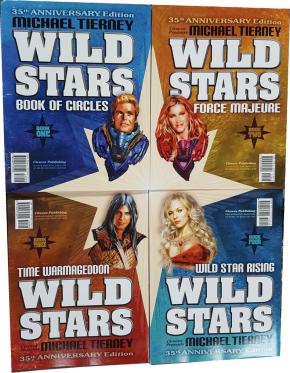 some of the Wild Stars backstock available via our Amazon store. We had several damaged copies when trying to fulfill our crowdfunds–these have been made available at 1/2 SRP. I’ll note that while a few of these were pretty mangled, most of them were dents, dings and corner creases. While these would’ve been unacceptable to send to backers or for retail shelves [especially for comic folks], these are perfectly good readable copies if you want Wild Stars at a lower buy-in.

Zombies (Everyday Should be Tuesday):  I have long been a fan of the 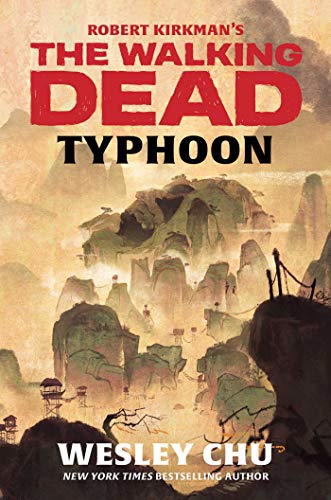 comics and watcher of the show, but I haven’t yet dived into any of The Walking Dead novels.  But with an impending trip to China and a good experience with Chu’s Lives of Tao books, Typhoon was the perfect book to start with.  Chu takes the action across the Pacific, telling a story set after the zombie apocalypse hit China.  If you think walkers are bad, wait until there are 700 million of them.

Publishing (Kairos): If you travel in the circles where this blog is read, you already know that yesterday Amazon nuked preorders for Jon Del Arroz’s and Declan Finn’s latest books. Amazon shut down Jon Del Arroz’s Glorified novel along with Declan Finn’s Deus Vult novel from publisher Silver Empire.  Publisher Russell Newquist was informed that both books, which were scheduled to be released on November 1st, were removed from Amazon and Kindle.

Fantasy (Misha Burnett): I have been thinking a lot about Fantasy, and specifically about fantastic settings–settings in which the fantastic elements are integral to the world. And frankly, I’m not interested in writing stories set in some vaguely Central European kingdom in the First Millenium AD. The Tolkien/D&D/Swords & Sorcery kind of setting is one that I don’t really relate to. I’ve never ridden a horse or herded a sheep.  I’ve never been in an actual stone castle, never fought using a sword or a mace, never fired a bow, and sitting around a campfire is something I do before I go inside and sleep in a real damned bed.

Science Fiction (Futurism.com): In 1982, director Ridley Scott graced the world with “Blade Runner,” the cult-favorite sci-fi film noir that painted a stunning picture of a bleak, distant future: November 2019. Since that starts, well, today, let’s compare our current timeline to the one in “Blade Runner.” Just please don’t bring back those insufferable jokes about hoverboards that flooded the internet in 2015 when we hit the futuristic date that Marty McFly traveled to “Back To The Future Part II.” 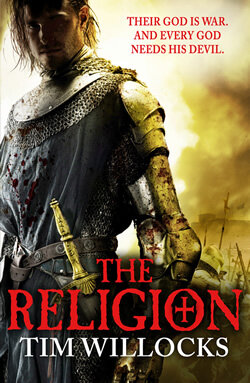 to a working-class family. He graduated from the University College Hospital Medical School, whereupon he began practicing medicine. He did some time as an intern in a trauma ward before specializing in the treatment of drug addiction. Tim eventually grew tired of the stress and hassles involved with practicing medicine and turned to writing. Willocks’ first published novel was the noir thriller, Bad City Blues. His next novel, Green River Rising, was optioned by Hollywood.

Warhammer (Track of Words): In this instalment I spoke to legendary

Black Library author CL Werner about his new Warhammer Horror novel Castle of Blood, which is available to order now in hardback, ebook and audiobook formats. It’s the first full-on horror novel released for Age of Sigmar, and promises to be very interesting indeed! Let’s get straight to the questions and Clint’s answers, to find out more.

Gaming (Dungeon Fantastic): GURPS DF has copper pieces ($1), silver pieces ($4) and gold pieces ($80). DF Felltower has its own devalued set. AD&D has copper, silver, electrum, gold, platinum, Rolemaster has coins from bronze to gold going by tens, and Dragonlance even has steel pieces (Hah*). Generally, though, those coins are the same everywhere. It’s rare for places to have extra coins.

story. First published in Unknown, February 1941. Collected in Without Sorcery (Prime Press, hardcover, 1949) and The Golden Helix (Dell, paperback, 1980; Carroll & Graf, paperback, 1989), among others. Reprinted in Human?, edited by Judith Merrill (Lion #205, paperback, 1954).    I suppose everyone, at one time or another, has had the following fantasy: that the world you see, and the objects in it, could disappear if you simply decided that they no longer existed. That the facade of life revolves around you and you only. You don’t even have to admit it. I know you have.

Halloween (Jon Mollison): Tomorrow night marks the one celebration that traditionally brings neighbors together to celebrate as a community.  Yes, we all grumble about early Christmas decorations and wish each other Happy New Year at parties, but Halloween is the one where you go out and meet your neighbors and share in a communal love of the macabre and candy and making little kids smile.

Fiction (Adventures Fantastic): He That Hath Wings” is one of Hamilton’s 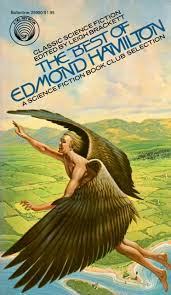 best works, so I was surprised to find that it hasn’t been reprinted very often.  Fortunately, The Best of Edmond Hamilton is in print, although the cover illustration of the current edition (see below) isn’t nearly as good. Just so you know, I’m going to discuss this story in detail, so expect spoilers. The story concerns a boy, David Rand, whose parents were caught in what is only described as an electrical explosion, but they were exposed to some unidentified form of radiation.  David’s father dies before his is born, and his mother dies a few hours after his birth. 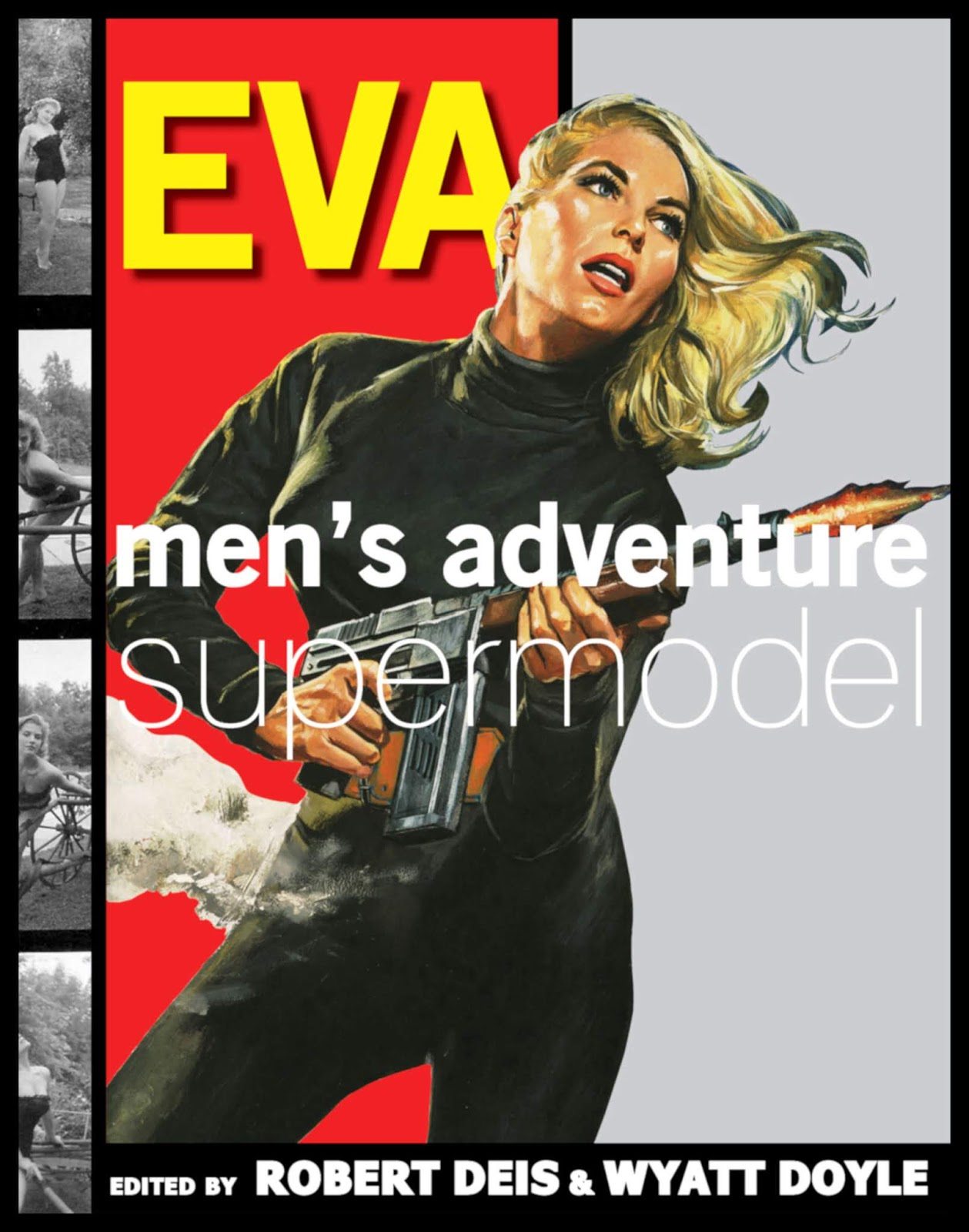 — the editors and publishers of THE MEN’S ADVENTURE LIBRARY series — will have their latest book, POLLEN’S ACTION, at this year’s PulpFest. It collects the cream of the Samson Pollen’s high-octane action paintings for the men’s adventure magazines. They’ll also have a limited number of copies of EVA: MEN’S ADVENTURE SUPERMODEL. These are being produced exclusively for members of PulpFest. This special edition — predating the title’s wide release by several months — will look at actress, pin-up model, and men’s adventure magazine artist’s model Eva Lynd.

Comic Books (John C. Wright): Feserm or, rather, the scoundrel JBS Haldane, defines the terms fantasy and imagination incorrectly, even misleadingly, but the point still stands. I propose a clearer definition: One is mere wish fulfillment that excludes consequences and context, and hence is outside the moral order. The suave British spy who nonchalantly seduces any gorgeous woman seen, yet without fathering any bastards or breaking any hearts, is an example.

Fiction (Paperback Warrior): The character of Modesty Blaise was

conceived as a comic strip in 1963 by British writer Peter O’Donnell. The success of the strip landed O’Donnell a film deal, and he wrote an early draft of the screenplay starring his sexy, female spy for a movie that was eventually released in 1966. A year before the movie’s release, O’Donnell adapted his unproduced screenplay into the first of 11 Modesty Blaise paperback novels in this highly-regarded series.

Fiction (DMR Books): It is in Michael Shea’s Nifft the Lean where the author

really shines in the way of crafting some amazing and unique dark fantasy. While using a familiar Dying Earth type of setting, and a style of prose that one might compare to Clark Ashton Smith or Fritz Leiber at times, it is the inventiveness of the plots that set the stories apart. Although Shea continued the Nifft series later in his career, the original saga published in the 1982 DAW collection consisted of four main tales.

Pulp (Mystery File): Private eyes in detective fiction are as often as not hard 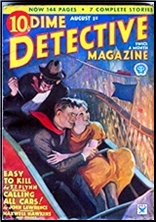 drinkers, and some of them are awfully good at it. But few of them are as good at it as was Peter Kane. There isn’t a single minute in “The Late Mr. Smythe” in which he isn’t totally sozzled. I can’t believe that anyone could go through life the same way he does, in three stages: drunk, drunker, and completely plastered.

Greyhawk (Boggswood): A few posts back, I posted an Apocalypse map of Blackmoor showing what Greyhawks’ Blackmoor should look like with the towns and rivers properly placed.  The map you see here is the one I used to site those locations. 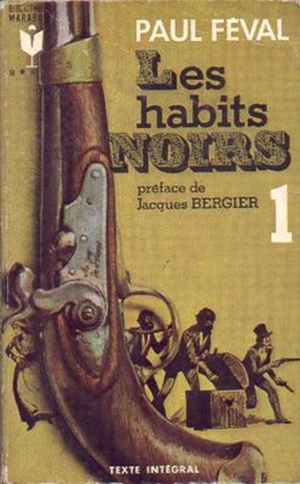 gangster. Fiction has a love affair with these characters ranging from low-level sneak thieves to wizards intent on destroying all life on Earth. In many cases, the villain is the driving force behind the tale. Where would fiction be without Lady MacBeth, Grendel’s Mother, Long John Silver, or Count Dracula? Though the villain is often the impetus, they rarely hold the place of protagonist in novels until recent times. A few famous characters did achieve notoriety, influencing fiction to this day.