Art (Stuff I Like): My friends and I didn’t read Robert E Howard, we didn’t 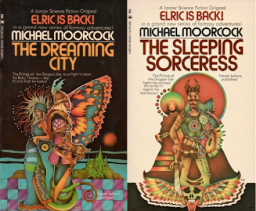 read Terry Brooks (other than that first Tolkien pastiche). A lot of us read Tolkien, but not everyone. Michael Moorcock, though, we all read. I think my friend Karl H. told me about Stormbringer first, before I picked up anything by Moorcock.I’m pretty sure he repeated the sword Stormbringer’s line to the dead Elric.

Gamer Gate (Kairos): The long and short of it is that a megacorp is asserting the power to ban you for life from a game you bought for how you conduct yourself in your own home. It’s been almost a decade since the first #GamerGate. The vidya oligarchs are overdue for a sharp lesson in what happens when they piss off extremely online, tech savvy autists.

Books (Wasteland & Sky): Generation Y tends to look back on the 1990s with rose-colored glasses, and it isn’t always for good or bad reasons. There was plenty to like: the music, the animation, the video games, and the relatively safe neighborhoods and communities. This is one of those times where I can say that how they were portrayed in TV series of the time isn’t actually that inaccurate to what it was like. Even in The Eyes in the Walls, much is mentioned of the comfort Billy appreciates and indulges in during the few short moments he can escape his problems.

Tolkien (Bounding Into Comics): Hot off their Summer Seminar 2021 where they put the focus on “Tolkien and Diversity,” The Tolkien Society will now feature a paper at their upcoming Oxonmoot event claiming there is an alt-right religious crusade to appropriate J.R.R. Tolkien. As part of the event’s programming, The Tolkien Society revealed they will feature a talk or paper by Robin Reid, a professor at Texas A&M University-Commerce, titled “J.R.R. Tolkien, Culture Warrior: The Alt-Right Religious Crusade’s appropriation of ‘Tolkien.’” 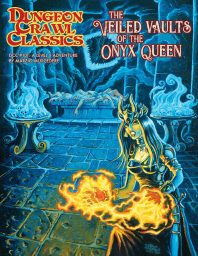 for Dungeon Crawl Classics. Players will embark on a 0 level funnel in The Veiled Vaults of the Onyx Queen. You can score the 26 page softcover (with PDF) for $9.99 or get the PDF alone at DriveThruRPG for $6.99. About the adventure: A Level 0 Adventure for DCC RPG 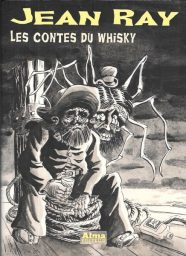 Horror (DMR Books): Jean Ray was born on this day. For those who do not know, he was a Belgian writer who is considered one of the founders of the Belgian School of the Weird. Known as the “Belgian Poe,” his work is often suffused with a sense of dread. He remains unfortunately little known in America, but that seems to be changing with Wakefield Press’s publication of his works. 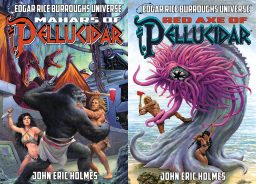 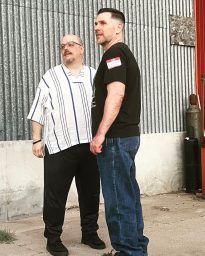 Robert E. Howard (North Texas Apocalypse Bunker): Robert E. Howard Days is an annual event that takes place just as the heat trends to nigh-unbearable in Texas. It’s also in a part of Texas that requires a car and a map to get there. This means that you have to want to come out for a visit. You fly into Dallas or Austin and rent a car (or hitch a ride with a fellow pilgrim) and make the two or three hour trek into the central part of Texas. 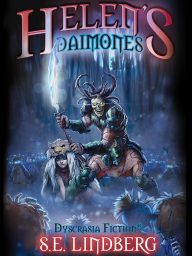 intersection of science, art, and spirituality. Since 2014, this muse compelled me to reach out and interview authors such as Anna Smith Spark, Carol Berg, Darrell Schweitzer, and Janet E. Morris on the topic Beauty in Weird Fiction (broadcasted on Black Gate since 2018).

Writing (Pulp Rev): The world of publishing is a cutthroat world. At the end of this sentence, there is a new story, a new author, a new series. The market is over-saturated with content, and little context with which to sift through everything. Audiences are less likely to take a chance on an unknown author. Indie stories might be cheap, but the time and energy invested in reading a story is not. Average readers would rather read more of the authors they love, and authors similar enough to the authors they love.

Games (Wert Zone): Andromeda is the fourth game in the Mass

Effect series and, as the lack of numeration hints, also a soft reboot of the franchise. The original Mass Effect trilogy told one story that over hundreds of choices made over three games until different players could have wildly different outcomes to their versions of Commander Shepard’s battle against the Reapers.

Games (DVS Press): Flashback to 1996. Everyone is hyped over the PlayStation, the Nintendo 64 (with its imminent launch in North America), and the Sega Saturn. Flashy new 3D graphics are getting all the attention, and every kid is talking during lunch about the latest PS1 game they want.

Review (With Both Hands): There is a shorter magazine version of Uller 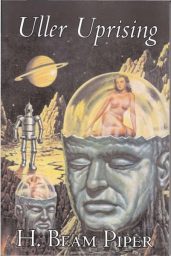 Uprising, but John F. Carr was able to photocopy one of the original print run of the longer novel and now we have an Ace paperback and this ebook edition. The original Twayne edition was a triplet called The Petrified Planet, with stories by Fletcher Pratt and Judith Merril. One of the best parts of the book is the original introduction, by Dr. John D. Clark, which sets out the astrogeology and evolutionary history of the planets in the book. 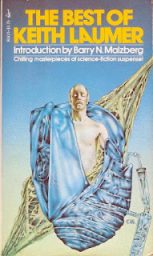 Science Fiction (M Porcius): In 1976, Pocket Books published The Best of Keith Laumer, a collection of nine stories with an intro by our beloved hero Barry Malzberg.  Dated “Teaneck, N.J., August 1975,” Malzberg’s introduction suggests that while the Retief stories are “fascinating” and “amazing” and enjoy a popularity which is “immense,” they are not Laumer’s most serious and important work, and there are no Retief stories in The Best of Keith Laumer.

Science Fiction (Marzaat): “A Slave Is a Slave”, H. Beam Piper, 1962. In Typewriter Killer, John F. Carr says this story may have inspired Piper’s later Space Viking. Both are in Piper’s Terro-Human Future History. Here the Space Vikings are mentioned in an almost mythical way, and Piper decided to detail some of their story in the latter novel.

Pulp (Rough Edges): The novelette “The Devil’s Sink Hole”, published in the 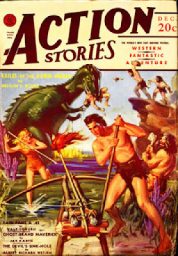 December 1940 issue of ACTION STORIES, is the longest of the Stinger Seave stories by Albert Richard Wetjen. It’s set late in Seave’s career as a somewhat shady trading ship captain in the South Seas. Tired of pursuing Seave for his criminous past, the governor of New Guinea decides to try a new tack: he recruits Seave to be a magistrate and sweetens the deal by offering to assign Seave to the job of cleaning up the most lawless island in the Pacific. 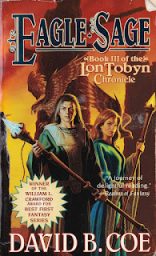 Fantasy (Chimney Sweep Reader): David Coe does an excellent job of completing the Lon Tobyn Chronicle trilogy, begun in “Children of Amarid“, followed by “The Outlanders“. I had expected this final volume to bring war between the two parts of the known world: Tobyn-Ser and Lon-Ser. After all, the first two volumes of the trilogy seemed to be setting that up. And indeed, war seems to be coming as the plot details the arrival of an Eagle, binding to a mage which historically has only occurred when a war leader is required.

Pulp (Spectre Library): Over the Top (January 1930) cover was created by 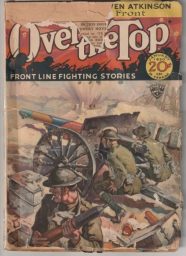 Harry Thomas Fisk (H. T. Fisk). Someone took the time to apply packing tape the entire length of the spine. Sadly, the top of the cover lacks a chunk, but, the artwork below is largely unaffected. This was acquired along with two more sequential issues: February and March. Those will be read and blogged in the future. 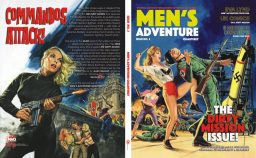 #5 our “Dirty Mission” issue. It focuses on “Dirty Dozen” style MAM stories and artwork, enhanced by several special related features, including: an introduction by Joe Kenney, author of the great vintage paperback review blog, Glorious Trash; a special section about the legendary artists’ model, pinup model and actress Eva Lynd and artist Norm Eastman, who often used Eva for his wild covers; an article about British war comics by UK fanzine king Justin Marriott; and, much more (which is why MAQ #5 is 170 pages long instead of 150).

Cinema (Collection Reviewed): Wayne’s is the lesser of the two – it’s more 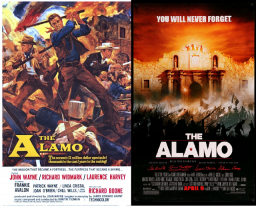 sentimental and rose-tineted – , but it’s got gloriously epic pageantry and makes a surprising effort to honor the Mexican soldiers as brave. It’s also filled with patriotic speeches, Mexican dancers, and a fun, but terribly out of place Laurence Harvey as Col. Travis. Wayne as Crockett is simply Wayne, as he too often was. Widmark is always good, but there’s little sense of the shady speculator or killer in his version of Jim Bowie. Still, as big war movies go, it’s solid enough (and Dmitri Tiomkin’s score is excellent).

Cinema (Neo Text Corp): Before Warner Bros. decided to take a chance and hire him to make The Wild Bunch, the classic revisionist western that would completely revitalize his career, Sam Peckinpah was laboring on television, an isolated Hollywood outcast paying the price for his pesky reputation of a highly skilled director who was often impossible to work with. With the tender fable of the dying West called The Ballad of Cable Hogue (1970), the controversially daring Straw Dogs (1971) and the action-packed crime thriller The Getaway (1972), Peckinpah enjoyed the most productive period of his brief but turbulent career.