Cinema (MSN.com): 40 years ago, the unlikely acting career of then-

bodybuilding champion Arnold Schwarzenegger went off with a bang in Conan the Barbarian (1982). Based on Robert E. Howard’s character of the same name from 1930s pulp magazines, Arnold’s epic sword and sorcery film was helmed by writer-director John Milius, the militant filmmaker best known for writing the Oscar-nominated screenplay Apocalypse Now (1979) for fellow “Movie Brat” Francis Ford Coppola. But in the end, Milius would share a co-screenwriting credit on Conan the Barbarian with Oliver Stone. 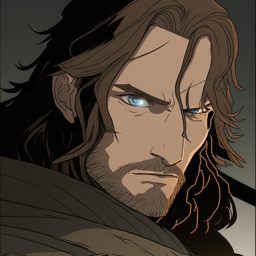 Tolkien (Masculine Epic): Aragorn is rightfully one of J.R.R. Tolkien’s most popular characters and might be one of the most well-known personalities in modern fiction. His fame comes for a good reason. Aragorn personifies the masculine virtues more than almost any other character out there. However, he is also an incredibly complex character, standing in the center of thousands of years of history and geopolitics.

Tolkien (Saxon Cross): Maps of Middle-Earth have been laid over maps of

Europe before. They’re never very interesting, because they seem to prove that Tolkien’s world was nothing close to a one-to-one representation of an ancient Europe. They usually place the Shire (per Tolkien’s instruction) at Oxford, but make no attempt to fit in anything else in a way that makes sense.

Robert E. Howard (Goodman Games): He’s laced all the way through, but probably my first explicitly Howardian DCC was #51.5: Sinister Secret of Whiterock. The corrupted gnomes were directly inspired by the creatures in “Worms of the Earth.” And when I was writing the adventure, it was with the specific intent to get back to “pre-D&D,” making it a proto-DCC RPG adventure, of sorts.

Firearms (Spec Op Magazine): The AKM is a Soviet-designed 7.62mm 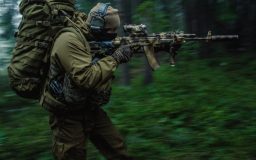 automatic rifle created by Mikhail Kalashnikov. It is an upgraded version of the AK-47 rifle, which was developed during the 1950s. The Soviet Red Army adopted the AKM in 1959, and it is one of the most produced versions of the AK family. The AK-74 officially replaced the rifle in the Soviet Army in the late 1970s, but it continued to be widely used worldwide. Many Soviet-made weapons identified as AK-47s are AKM or copies made by other countries. 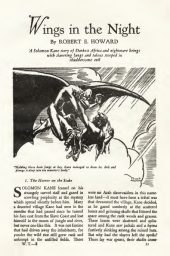 published in Weird Tales, July 1932. It was reprinted in Skull-face and Others, Arkham House, 1946. It appeared in edited form in Red Shadows, Donald M. Grant, 1968. It was reprinted again in The Hand of Kane, Centaur Press, 1968.

Copyright (Center for the Study of Public Domain): On January 1, 2023, copyrighted works from 1927 will enter the US public domain. 1  They will be free for all to copy, share, and build upon. These include Virginia Woolf’s To The Lighthouse and the final Sherlock Holmes stories by Arthur Conan Doyle, the German science-fiction film Metropolis and Alfred Hitchcock’s first thriller, compositions by Louis Armstrong and Fats Waller, and a novelty song about ice cream. Please note that this site is only about US law; the copyright terms in other countries are different.

continues with Esteban Maroto and Dax taking the show. In fact, with Sword & Sorcery gaining steam, Eerie became Warren’s home for most of the S&S they now published. You still found the odd tale in Creepy and Vampirella but if you wanted Dax and a regular feed of barbarian swordsmen taking on monsters you read Eerie.

Reading List (Tangent Online): As with previous years, this list is not meant as comprehensive, there being a number of items we didn’t see, especially at the novella length. As was the case with the last several years, we narrowed our focus (with some exceptions) to those stories published in professionally paying markets. There are 264 stories on this year’s list (down 36 from last year’s 300): 201 short stories (down 35 from last year’s 236), 52 novelettes (the same as last year), and 11 novellas (down 1 from last year’s 12).

Weird Tales began in March 1923, and despite nearly perishing the following year, it went on for a total of 279 issues in its initial run, finally reaching its end in September 1954. Marvin Kaye dubbed Weird Tales “the magazine that never dies,” and so far he has been right. Weird Tales has passed from publisher to publisher, editor to editor, and–I believe–from license-holder to license-holder. 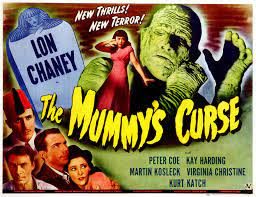 played fast and loose with its timeline. The final Mummy movie–1944’s The Mummy’s Curse–might have the oddest time jump of all. It is set 25 years after the previous film. I suppose that means it’s set in the far future year of 1969. Obviously, the producers didn’t care about that detail. But, when you watch the film, there’s nothing really overt about it that says it’s NOT set in 1969 other than the car the protagonist is driving. Perhaps the guy just likes antique cars.

Cinema (DMR Books): The King Arthur myth is extraordinarily sticky because it is extraordinarily primordial and intensely human. It is a story spanning deep eons of time, but also touches something personal and present, deep within our hearts. As does the greatest film ever made about this wondrous myth—the John Boorman-directed Excalibur (1981).

Firearms (Winchester): 150 years ago, the revered

Winchester Model 1873 began its historic run. Similar to the earlier Model 1866 “Yellow Boy,” the ’73 traded the brass alloy receiver for iron, adding strength and other improvements such as a dust cover that covered the loading/ejection port. Fortunately for Winchester, the release of the ’73 coincided with unbridled expansion into the untamed region of the American West, which caused demand for these reliable rifles to soar. 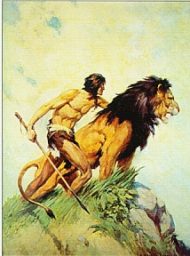 Edgar Rice Burroughs (ERBzine): In the previous novel – Tarzan the Terrible – Tarzan rescued Jane after he discovered that she was alive, and was reunited with his son Korak. In this story he and his family encounter and adopt an orphaned lion cub, whom they name Jad-bal-ja (“The Golden Lion” in the language of the lost land of Pal-ul-don, which they have recently left). They then return to their African estate, gutted by the Germans during the course of World War I in Tarzan the Untamed. They find it already being rebuilt by Tarzan’s faithful Waziri warriors, including old Muviro, who first appears in this novel after a previous mention in Tarzan the Untamed.

Pulp (Rough Edges): One of the first books I ever bought about pulps was 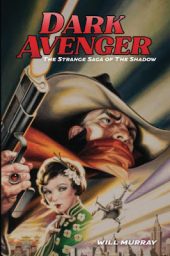 THE DUENDE HISTORY OF THE SHADOW MAGAZINE by Will Murray, an author/editor/pulp fan who I probably met through our mutual friend Tom Johnson. This was more than 40 years ago, so some of the details have slipped my memory. But I was a big fan of The Shadow, having listened to the radio shows, read all the original novels published by Belmont (having no idea at the time that they were written by Dennis Lynds, another guy who would become a friend years later) and all the reprinted pulp novels from Bantam, Pyramid, Jove, Tempo, Dover, etc. 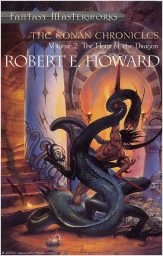 Robert E. Howard (Paperback Warrior): I questioned whether to place “Wolves Beyond the Border” in the Conan category. Technically, it’s in the same fictional universe and mentions the hero, but Conan doesn’t actually appear in the story. Yet, it first appeared in the 1967 Lancer paperback Conan the Usurper, alongside other Conan classics like “The Scarlet Citadel” and “The Phoenix on the Sword”. By association alone, it seems mandatory. In fact, Howard began the story in the 1930s, but it went unfinished and unpublished. It was located in 1965 by Glenn Lord and then passed to L. Sprague de Camp to finish writing the story based on Howard’s notes and summaries.

Cinema (Don Herron): Brian Wallace slipped me the dope back in 2019 that Liam Neeson was lined up to portray Philip Marlowe in a flick. My favorite line from the coverage: “Obviously, Neeson is also his own genre.” Obvious, indeed. He’s carved out a late-career niche not dissimilar to what Charles Bronson did with his filmography. 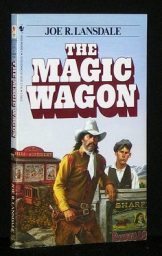 thing; it’s a western not like you’ve ever read before or since, I’d imagine. Where else do you have mummies, sharpshooters, an orphan named Fogg and Albert, an ex-slave traveling the west with a chimp named Rot-Toe? Oh, and this is how the thing starts:

D&D (Walker’s Retreat): For a player, entering a campaign will involve playing a character. This character is generated, not built; this reflects the fact that a proper RPG campaign shares roots with Rogue (and thus with all Rogue-likes), and thus the character is not a purpose-built machine for a player to pilot as if it were a robot.

A generated character requires that the player takes what is issued to him and make the most of it, a process further constrained by any campaign-specific considerations.

Robert E. Howard (Grognardia): Today marks the 117th anniversary of the birth of Robert Ervin Howard, creator of such icons of pulp fiction as Conan, Kull, Bran Mak Morn, and Solomon Kane, among many, many more. I don’t think it’s possible to overstate Howard’s importance to the development of sword-and-sorcery literature. The character of Conan is, without a doubt, one of the most well-known fantasy characters of all time and the tales of his adventures established a template that has been widely imitated ever since his first appearance in 1932. These facts alone justify commemorating this day each year.

Disney (Arkhaven Comics): Looks like I was wrong about the reason Chapek was fired.

In fairness to me, I wasn’t the only one making guesses about FTX.  It was the only information that was openly available at the time. Although, it’s possible that there might have been something related to that exchange crash after all. Regardless, it appears that Iger had been actively plotting Chapek’s downfall from the day he was forced to step down as CEO in February of 2020.

Fiction (Wasteland & Sky): Here it is, the long awaited final book in the

series! After a long run in Cirsova magazine, the Mongoose & Meerkat stories by Jim Breyfogle are finally getting compiled together for one last collection. Now Cirsova has decided it’s time for the final release! You can find the Kickstarter campaign here.

Games (Jon Mollison): Why did I wait so long? Joseph 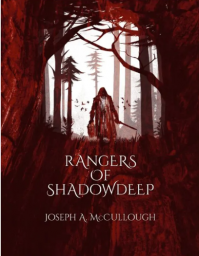 McCullough’s masterpiece, Rangers of Shadowdeep has everything a man could ask for in a solo skirmish fantasy wargame.

Everything except hope, but maybe that comes later. The basic mechanics are simple.  Skill checks consist of a basic d20+skill versus a toughness number.  Combat is opposed d20+fight skill modifier, with damage determined by subtracting the loser’s armor score from the winner’s winning combat score.  It’s just that easy, and with a system this streamlined, Joe frees the player’s attention up to manage a host of other mechanics.

Robert E. Howard (Too Much Horror Fiction): This week saw the 108th 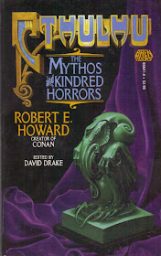 anniversary of the birth of the pulp king of sword and sorcery  and the creator of Conan the Barbarian, Robert E. Howard. You probably already know this, but along with Lovecraft and Clark Ashton Smith, he was a titan of the pulp era and his books have long been available in countless and now collectible paperback editions.