Fiction (Ken Lizzi): I think a brief reminder is all that is needed here: Lin 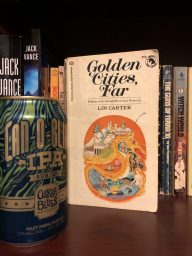 Carter was a gifted and prolific editor. One of the volumes he put together for The Adult Fantasy series was a book titled Golden Cities, Far. The introduction is one of his better efforts, and seems to have been exhaustively researched. In fact, the book benefits from Carter’s notes, commentary, and humor throughout. This is the second of his collections of old myths, legends, and tales that are the roots from which the tree of heroic fantasy sprang.

Tolkien (Amatopia): Beloved franchises and intellectual properties are all the Hollywood machine wants, because they’re lazy. They can expend minimal effort in drumming up interest in their projects. A known quantity, a beloved franchise, a name they can trade on, becomes the skinsuit that these weirdos can wear while twisting and subverting the works of better men and women into their own bizarre image.

Forthcoming (Wasteland & Sky): After many years in development, and going through two separate publishers, as well as many different editors and creative hands, the Planetary Anthology series has finally wrapped up! Today is the official release of the final volume, Saturn, and for the first time every volume is now out in the wild.

Culture Wars (Matthew Hopkins): In short, a lot, if not all, of Mr Sanford’s so called evidence does not support his contention. There are one or two posts which can be construed as abstract calls for violence but most of his evidence does not even support that contention. Baen’s Bar seems (on Mr Sanford’s evidence) no more guilty than Twitter. There are perhaps a few bad apples. Probably less than Twitter, in fact. Yet, as a result of Sanford’s article, an innocent book publisher is facing threats to their livelihood.

Authors (DMR Books): Where there was once a cold unmarked plot of land 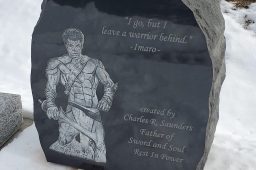 in Halifax, Canada, now stands the headstone of a warrior. After dying alone and unknown in May of this past year, his death unreported until September, author Charles Saunders of Imaro fame has, through the actions of fans, received recognition worthy of his contributions to sword-and-sorcery.

Writing (Story Hack): The American Short Story is an article by Katharine Fullerton Gerould which appeared in the July, 1924 Yale Review. It was mentioned in an old book on writing that I’m reading. I’m not going to put the full text in here, but if you are interested, I’ll put a link to a pdf at the bottom of the post.

Sale (Cirsova): We have some enormous stuff just on the horizon that we can’t wait to share with you, but until then, let me vamp by reminding everyone that MANY Cirsova back issues are available from our Aerio store for under $7. If you need to fill gaps in your collection, the best way is to visit our Aerio store!

RPG (Matthew J. Constantine): I’ll admit that I’m no scholar when it comes to Dungeons & Dragons.  It wasn’t my entry point game and I’ve actually only played it a few times.  But I’ve been into RPGs since the 80s and I’ve picked up a few things.  Reading through various Dungeon Crawl Classics scenarios, I definitely get the feeling that some of them pay homage to early ‘classics’ of D&D.  Moon-Slaves of the Cannibal Kingdom, I believe, is inspired by The Isle of Dread.  Both take more than a little inspiration from “King Kong” and other pulpy jungle island tales. 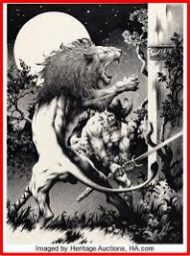 Robert E. Howard (Earl Livings): This is the third in a series of story structure blog posts analysing Robert E Howard’s celebrated story, ‘The Tower of the Elephant’.  In a post earlier this month, I looked at Robert Heinlein’s ‘Five Rules for Writing’. These rules were listed almost as an afterthought in an article he wrote for Of Worlds Beyond (1965), a symposium of essays by leading SF writers of the day about their experiences in the field. The main part of Heinlein’s article (‘On the Writing of Speculative Fiction’) featured an analysis of what a story is, what SF is, and what types of SF stories exist. 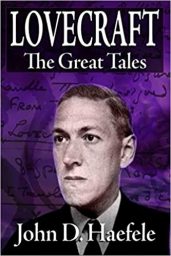 anniversary of August Derleth’s birth rolled around again and my copy of Lovecraft: The Great Tales by John D. Haefele fell from the Outer Dark–like a planet-killer asteroid–into my mailbox. The two events are certainly related and, thus, must be a sign from the Great Old Ones.

Video Games (DVS Press): The art of the game is its gameplay. Gameplay is what defines a game as a game, just like every medium is defined by what makes it different from other mediums – what it has that other mediums lack. Movies are audio-visual. Comics are visual. Books are prose and dialogue, operas are stories with music, etc. There is some level of interactivity and player operability that is inherent in the very idea of a game. Reducing gameplay would make a game less a game.

Anime (Arkhaven Comics): I could tell that Anime had gone mainstream when it arrived in the PX.  There is a belief among civilians that stuff is cheaper in the PX.  This is only marginally true, It really isn’t what it used to be.  Back before I came in, everyone in the Exchange system was in uniform, (from the truck driver who picked up the merch at the warehouse to the guy who ran the cash register). Everything thing got sold to GIs at wholesale.

Horror (Brain Leakage): Which is why I was so happy to finally get my 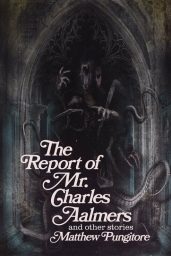 hands on an early review copy of Matthew Pungitore’s new collection, The Report of Mr. Charles Aalmers. This slim little collection offers up tales of madness, horror, and existential dread alongside the occasional moment of haunting, gothic beauty. And it’s all told in a florid style, one newer writers mostly seem to have forgotten how to use effectively. 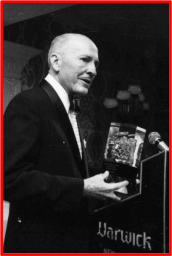 Writing (Earl Livings): Along with Arthur C Clarke and Isaac Asimov, Robert Heinlein is considered one of the true greats of science fiction. Heinlein published 32 novels, 59 short stories, and 16 collections. Four films (including Starship Troopers and Predestination) and two television series have been based on his work. My favourites of his novels are the standout Stranger in a Strange Land and the under-rated The Moon is a Harsh Mistress. 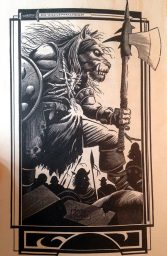 comics for a long time now. Back in the early 80’s, Truman began his professional career as an illustrator for TSR, the Dungeons & Dragons people. His style was perfectly suited for creating detailed characters and the fully-realized worlds they could inhabit. One of my favorite things that he illustrated is this ENDLESS QUEST paperback. You might have fond memories of this book from your childhood. I know I do. 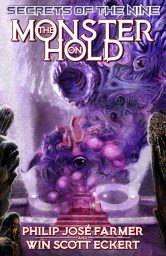 Science Fiction (Win Scott Eckert): Philip José Farmer worked on The Monster on Hold, the fourth novel in his Secrets of the Nine series, in the 1970s and ’80s, but never completed it or any other works in the series. Using Farmer’s partial manuscripts and copious notes, Win Scott Eckert, co-author with Farmer of The Evil in Pemberley House, has at long last completed the novel.

Film (Heavy Metal): Richard Corben’s signature story and character was Den — not only was it the first story in the first issue of Heavy Metal (April 1977), it was also the basis of one of the major episodes in the 1981 Heavy Metal movie. Corben didn’t just up and create Den for us, though. The character was a long time in developing, first appearing in print in Corben’s underground title Grim Wit #2 (1973), published by Last Gasp Comix. It was then published in Metal Hurlant (in French) in 1975, before finally landing in the pages of Heavy Metal. 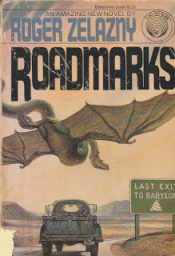 TV show. HBO are developing Roger Zelazny’s 1979 novel Roadmarks as a television series. Kalinda Vazquez (Star Trek: Discovery, Fear the Walking Dead, Once Upon a Time) will be the main showrunner on the project, as well as a writer and executive producer. Vince Gerardis, a producer on Game of Thrones and House of the Dragon, will also produce the project.

D&D (Grognardia): I’ve long argued that an essential feature of old school play is randomness. Embracing the oracular power of dice is something in which I believe quite strongly and have employed to good effect many times in my ongoing campaigns. My feeling remains that we ought not lose sight of the fact that, when we’re playing Dungeons & Dragons or Traveller or whatever, we are playing a game and a key feature of any game is uncertainty.

Video Game (Bloody Disgusting): Werewolf: The Apocalypse – Earthblood is very much like one of those horror films where it’s a bit shoddy, you know the budget isn’t especially high, but it has blood flying about, and an enthusiastic charm that shines through. The latest in a variety of games that draw from the monster-filled World of Darkness universe is, on the surface, a relatively standard third-person action game where you take control of a grizzled white guy scrapping against an evil force, and for portions of the game that is extremely true. 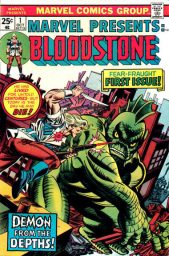 updating to the Comics Code in the early 1970s, letting monsters, demons, vampires, werewolves, mummies, zombies, and other things that go bump in the night fill their pages. It encouraged publisher Stan Lee to go head to head with Jim Warren, unleashing a flurry of black and white magazines that explored the supernatural. At the same time, an explosion of color comics included numerous try out titles that let some of these creepy folk flex their muscles for a curious audience.