Review (Brain Leakage): In terms of pure entertainment, I can’t recommend Hernstrom’s story enough. And if all you’re craving is a dose of pure, adrenaline-filled awesomeness with alien ruins, axe-wielding barbarians, motorcycles, and talking monkeys, then stop reading this review NOW. Buy Hernstrom’s new collection, The Eye of Sounnu from DMR Books, which is where you can read this slice of pure heavy-metal havoc. I promise, you won’t be disappointed. 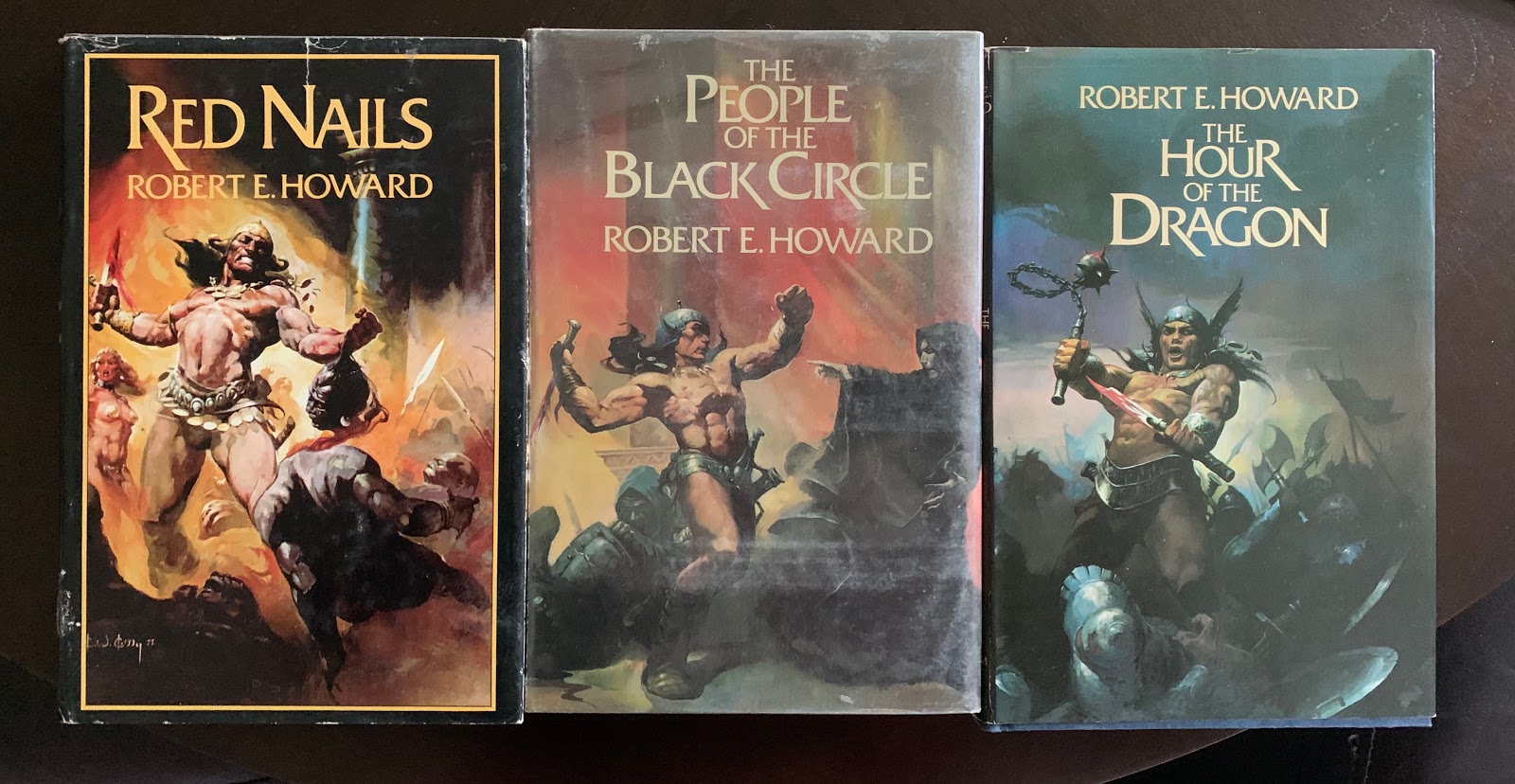 that I own than anybody else – and that’s a lot considering I typically buy every Frazetta I can find. Kelly is such a work horse and has done so many Conan’s and other sword and sorcery related covers that it is staggering. He has done a lot of heavy metal covers too, but I don’t think I have any of those but when it comes to book covers wow -its staggering.

Interview (The Dacian): To kick off the series I asked my favorite living Sword & Sorcery writer Schuyler Hernstrom to be my first subject. Over the weekend Hernstrom took the time to chat and answer a few questions. Schuyler Hernstrom is a fantastic writer of Sword & Sorcery whose recent short story collection The Eye of Sounnu I review here, and made the subject of the first Short Story Bookclub.  You can also read his previous collection Thune’s Vison and he’s been featured numerous times in Cirsova Magazine, including the upcoming summer special.

Forthcoming (Story Hack): I recently annouced that I’ll be publishing a collection of short stories by the ever-entertaining Misha Burnett. It will release on June 15th. This collection features reprints as well as new work. And now, you can preorder the ebook version on Amazon. Paperback will also be available, but there won’t be a preorder. For those of you who do buy a paperback, I’ll make available bookplates signed by the author. Details on that to follow.

Men’s Adventure Magazines (Menspulps.com): Most of the magazines in 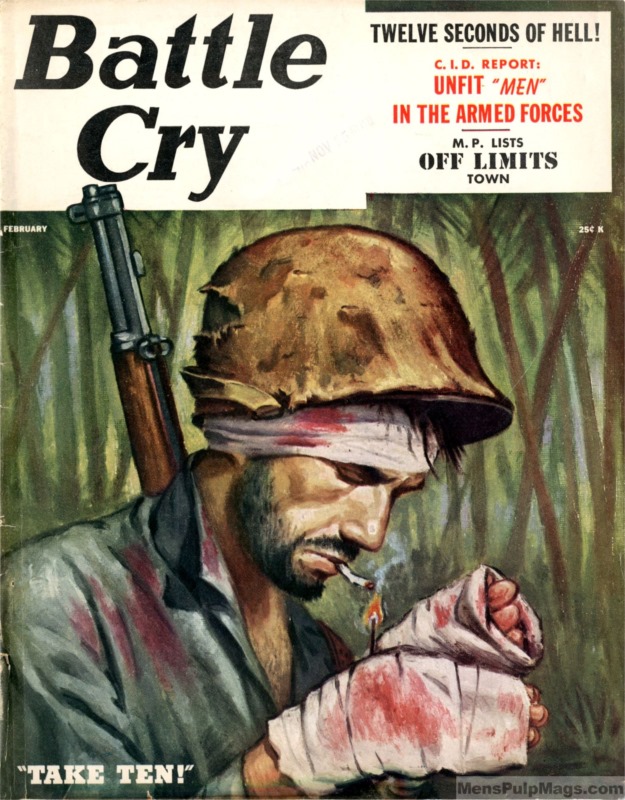 the war mag subgenre were fairly short-lived (as were many other magazines in the men’s adventure genre in general). The longest-lasting was BATTLE CRY. It was published from late 1955 to mid-1971 by Stanley Publications, Inc., the flagship company of pioneering comic book and magazine publisher Stanley P. Morse. When the puritanical 1954 Comics Code essentially banned violent or sexy images in comics, Morse discontinued his BATTLE CRY comic book and created the men’s adventure magazine BATTLE CRY.

Fiction (Goodman Games): May 20th is the birthdate of Gardner F. Fox. But 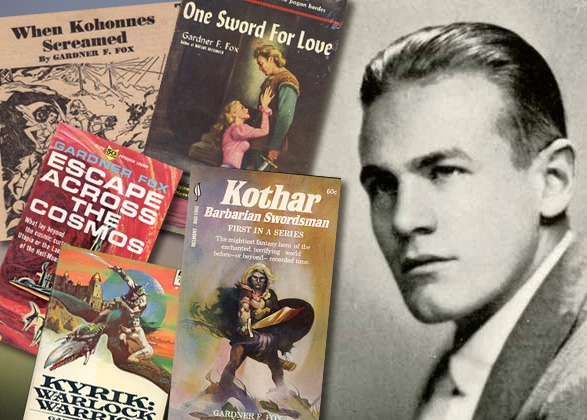 when people see his name on the list of Appendix N authors, there’s often no recognition of his name as a writer of fantasy. He has passed into relative obscurity for contemporary fans of the genre. It is not surprising considering that he is best known as the author of the Kothar books (discounted by many as a cheap knockoff of Conan) and the Kyric books (a likewise discounted knockoff of Elric).

Science Fiction (M Porcius): A. E. van Vogt has many detractors, and their criticisms are not all off base; you might say the Slan man, Canada’s finest

Art (DMR Books): However, Angus was painting fantasy art long before he 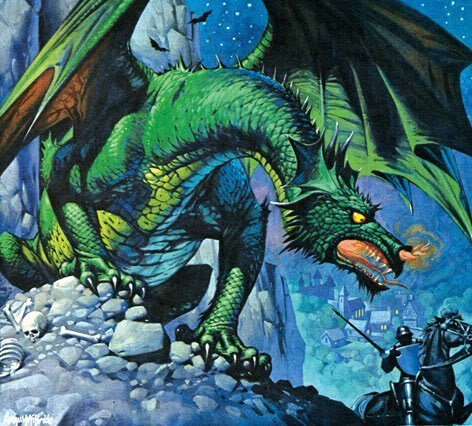 was doing work for RPG publishers. During the 1960s, McBride was creating art steadily for Look and Learn magazine as well as its competitor, Finding Out. Both were aimed at a juvenile/young adult audience, but the art and writing in them were well above what one would find in similar publications today.

D&D (Jeffro’s Space Gaming Blog): Just looking over these old sessions and I have to say, it really takes my breath away: The Hole in the Sky, The Thing in the Sewer, The Big Score, The Drums of the Dog People, Altar of the Beast-women, The Pugs of Slaughter, The Overbearing of the Crystal Men, The Song of Fàgor. 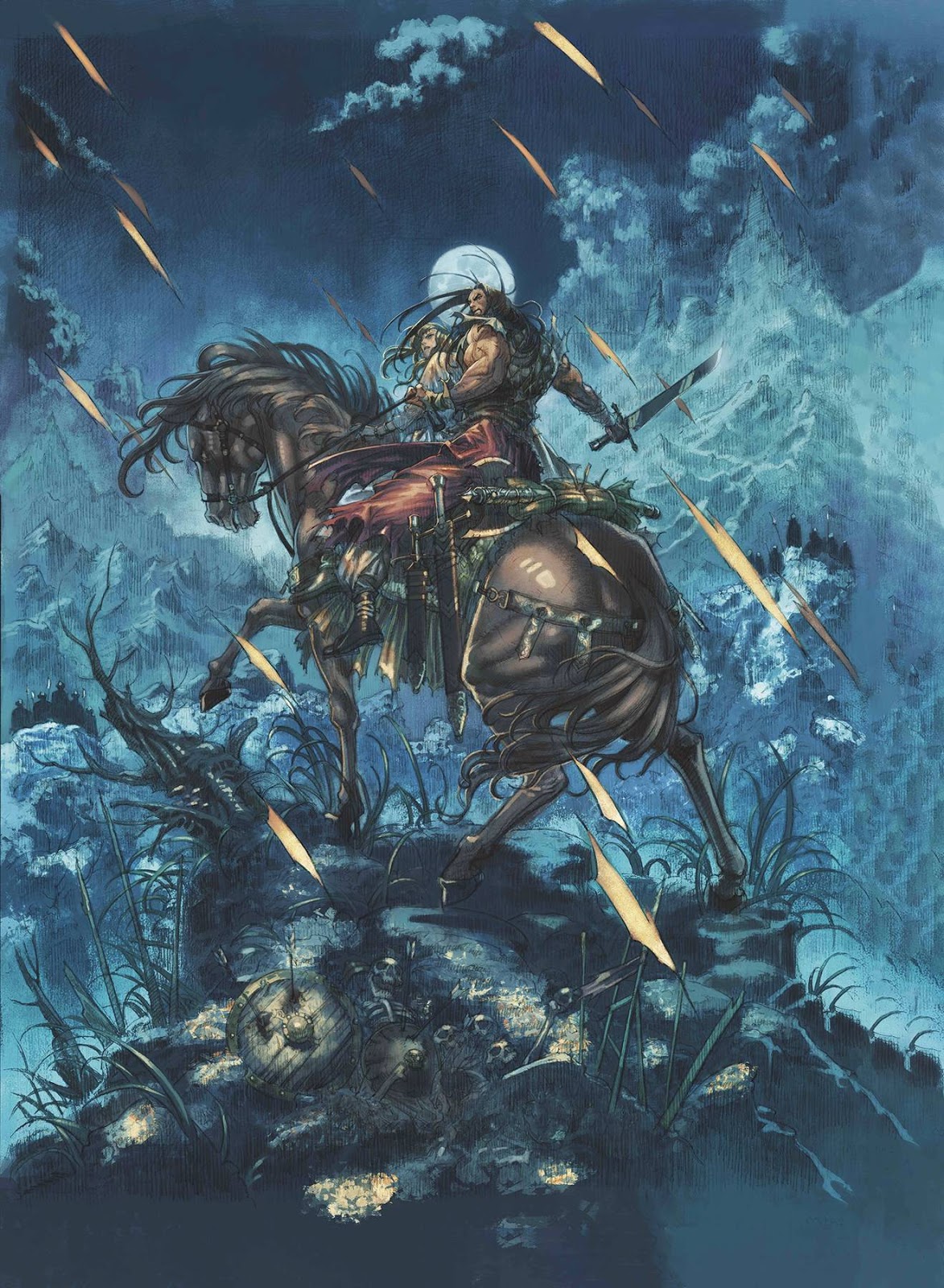 PEOPLE OF BLACK CIRCLE #1 Coming in August! Robert E. Howard’s Conan is brought to life UNCENSORED! Discover the true Conan, unrestrained, violent, and sexual. Read the story as he intended! In the kingdom of Vendhya, the king has just died, struck down by the spells of the black prophets of Yimsha. The king’s sister, Yasmina, decides to avenge him…and contacts Conan, then chief of the Afghuli tribe.

Science Speculation (Pulprev): In the world of Singularity Sunrise, where robotics and AI threaten to replace humans in every major field, one of the few things that cannot be quantified, mechanised and reproduced by machines is psychic powers. Don’t expect Hollywood-or anime-type powers here. In this universe, psychic powers are the outgrowth of research projects like Project Stargate, investigating the potential of the mind to gather information through extra-sensory perception.

Video Games (Kairos): The Internet Archive even has every back issue of Nintendo Power, so the re-creations of those long-lost after school decompression sessions  with a new kart slotted in my SNES, a crisp copy of NP flopped open on the couch, and a bowl of popcorn in my lap are almost perfect. Archive.org doesn’t call its old web site search feature the Wayback Machine for nil. One thing that hits you over the head when you go back and play the old 2D sprite-based games is the real craftsmanship behind the bright colors and pixels. 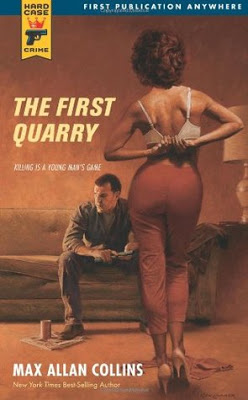 contributor to the gritty hard-boiled line of mystery fiction. His well-respected creations include Nate Heller, Nolan, Mallory and the subject at hand, Quarry. The Thrilling Detective blog cites Quarry as the first hired killer series, predating Loren Estleman’s Peter Macklin and Lawrence Block’s Keller. Collins released the debut, The Broker (aka Quarry), in 1976. After four more novels, and a ton of fan mail requests, the author began releasing series installments again in 2006.

Poul Anderson (Mystery File): POUL ANDERSON “The Martian Crown Jewels.” Short story. Freehatched Syaloch #1. First published in Ellery Queen’s Mystery Magazine, February 1958. One reason for the story’s popularity, I think, is that there really aren’t many examples of combining traditional detective stories with hardcore SF, and this is a good one. The detective on the case is Martian private detective Freehatched Syaloch, but this seems to have been his only appearance in print. Missing are the Martian crown jewels, which have been on display on Earth, but on their state secret return to Mars, via Phobos, one of the planet’s moons, they have completely disappeared. 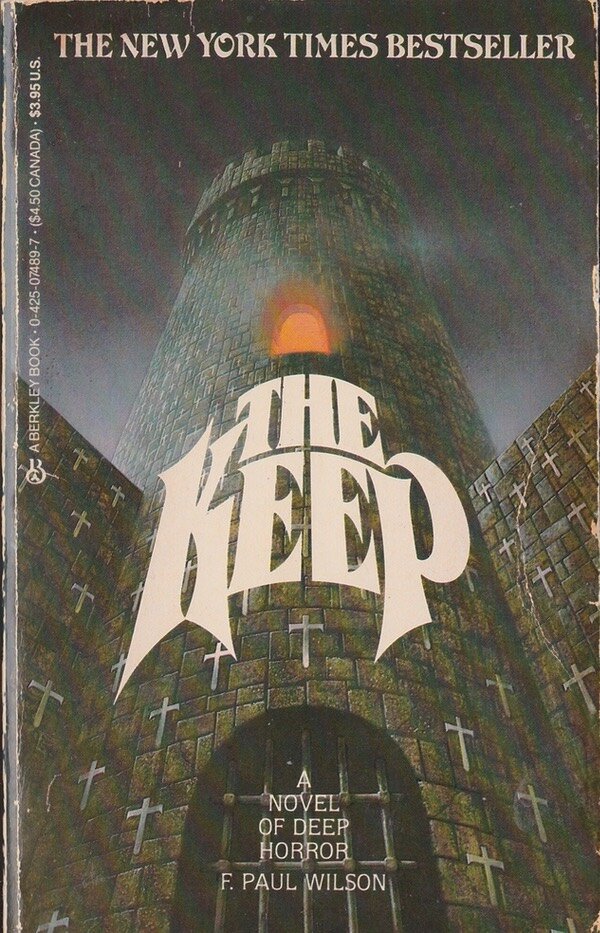 obliquely and in the guise of the big, fat,  international thrillers authors like Robert Ludlum were popularizing in the early Eighties. A swaggering, World War II adventure story full of  warring immortals, sneering Gestapo officers, magic swords, and Weighty  Questions about Faith, The Keep  arrived as the smaller novels of the Seventies started giving way to the massive blockbusters of the Eighties. Painted in broad strokes on a big canvas, The Keep fits comfortably into a decade that would make literary rock stars out of authors like Anne Rice and Stephen King.

Weird Tales (Dark Worlds Quarterly): August Derleth takes a lotta crap. Some of it is deserved but some of it isn’t. Like when people say Derleth wouldn’t have been in Weird Tales without Lovecraft. That is simply not true. August’s first Weird Tales appearance was “Bat’s Belfry” (Weird Tales, May 1926), eleven years before Lovecraft’s death. His first Mythos tale was “The Lair of the Star-Spawn” (Weird Tales, August 1932) with Marc R. Schorer. This story appeared during HPL’s lifetime. Derleth had written forty stories previously to Star-Spawn. He wouldn’t write a posthumous Mythos tale until his seventy-second, “The Return of Hastur” (Weird Tales, March 1939), the year Arkham House began publishing. Of Derleth 132 appearances in WT, only 15 were Cthulhu Mythos (with one other appearing at Strange Tales). That means Derleth appeared in 40% of all issues.

D&D (Goblin Punch): The most interesting part for most of you will probably be the Advice for DMs section, but I’m posting the whole thing here since it’s a good explanation of (a) old-school dungeoncrawls, as I see them, and (b) the style of gameplay that I’m shooting for in the Lair of the Lamb.

Writing (Amatopia): A corollary to my recent post about villains who may have had a point after all: I am not advocating for the “sympathetic villain” trope. In fact, I generally dislike that trope. But I have a theory that a lot of new and new-ish writers can’t help but write villains like this because they forgot how to make heroes actually heroic. This is not because our traditional culture is bad and out if step with the times. It’s because a cadre of nihilistic relativists hijacked the culture with the intent of changing it to suit their own spiritual and psychological hangups. It’s a tale as old as time.

Cinema (Giant Freakin Robot): Starship Troopers should have been a 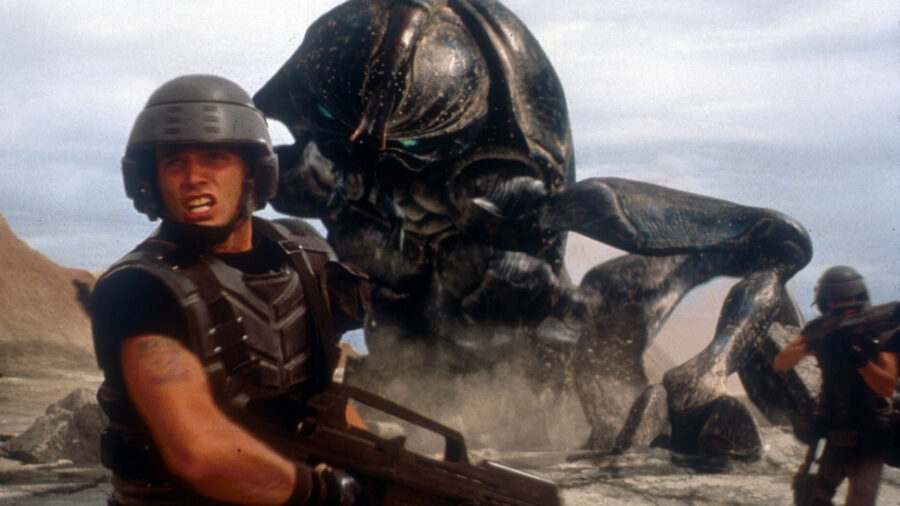 gargantuan hit. With a $100m+ budget and the director behind sci-fi triumphs like RoboCop and Total Recall, the adaptation of Robert Heinlein’s 1959 novel was poised to be a smash hit both financially and critically. That’s not what went down in 1997. We have to understand that the movie-going public was very different in 1997. Films were sold on their stars more than their premises. If you look at the biggest earners of the year, you’ll see movies whose marketing campaigns were structured around their lead actors: Men in Black, Liar Liar, Air Force One, My Best Friend’s Wedding.