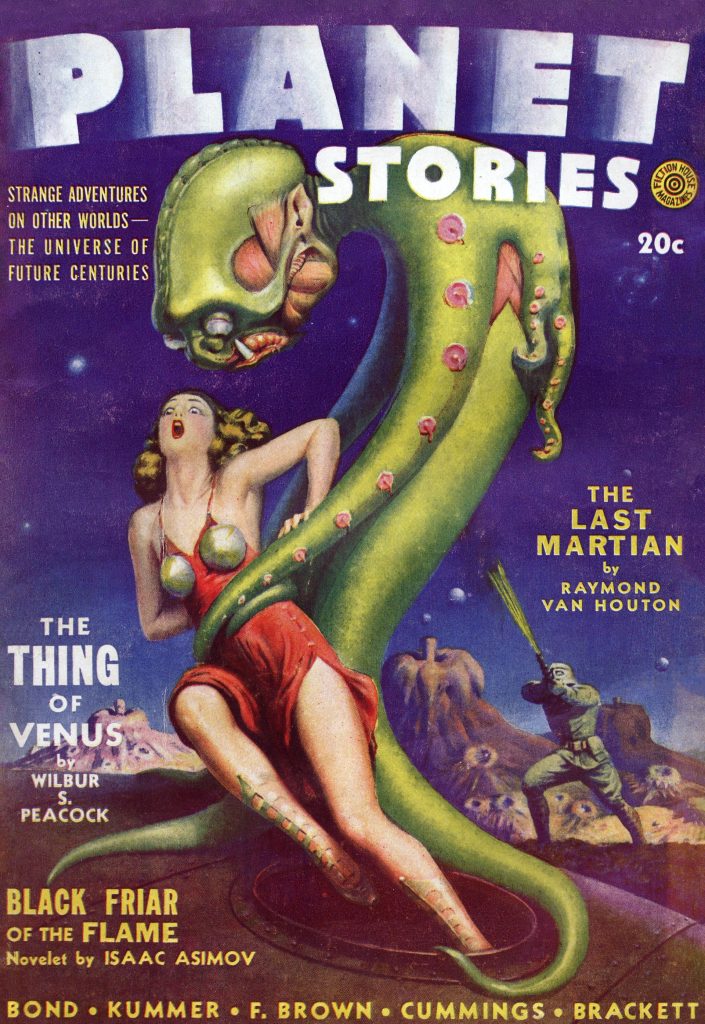 Pulp Revolution (Jon Mollison) Adventure Constant: Exuberant Adventure — “But this book is more about action and adventure and the panoramic setting of Mollison’s parallel Earth: a globe divided into the Red Collective, the Shogunate of the Red Dawn, the Machine Empire of Europe, the Allied States, the Hashishim Moonies, and undoubtedly more not yet mentioned (hopefully there will be sequels). The world’s history resembles our own just enough to be vaguely familiar, but as if it had been conceived by a Martian counterpart of Edgar Rice Burroughs creating a setting for tales of exotic derring-do on the Blue Planet.”

D&D (Gaming While Conservative) The Dungeon: Lucky Number Seven — “Oh, I should mention, the silence was dropped on the doorway – the players were specific about wanting to know if the spell blocked all sound or if sound passed through it. I’ve always played that it blocks all sound, like a cork in a bottle. And what about that spell cast by the wizard? He stepped back out of the radius to cast the spell into the silence. It blocks sound – not math. (You do know Vancian magic is just pure hyperadvanced math, right? If not, hie thee to Appendix N and learn from the progenitors, youngling!) So it doesn’t block spell effects, just the ability to cast spells.”

Movies (JimFear138) The Best Science Fiction Movie Of All Time… — “Part of what’s killing science fiction and fantasy literature right now is the need for EVERYTHING to be this gigantic saga of epic proportions, with each installment more nail-biting and with higher stakes than the last. Well, that can lead to Dragonball Z Syndrome fairly damn quickly. Or Supernatural Syndrome, where they already beat the Devil back into Hell so in season 7 they’re taking on The Devil’s Roommate From College Who Wasn’t Really All That Evil But His Dad Wants Him To Take Over The Family Business Oh And His Name Is Bob. Self-contained stories are superior, in my opinion. I’d much rather read something like Robert E. Howard’s The Horror From The Mound and get a really good short, self-contained story than read something like Game of Thrones where I’m going to have to devote literal months of my time to going through these 800 page novels.”

D&D (Cirsova) DCC’s Sailors on the Starless Sea — “Someone has recommended to me that it’s a good idea to intentionally kill subpar characters at the first available opportunity, in part because if they do survive, they’ll wreck your campaign experience, but that’s definitely not something I could subscribe to. I love my crappy sub-par characters! First game, my crappy thief ended up the longest lived and genuinely scariest party member. By the time we ended that game, she’d made it to level 4, had 9 hit points and a collection of faces she’d cured and turned into masks. Plus, with the way the Thief skill tables work, they can be pretty good at doing their jobs regardless of stats. It’s a great class to dump mediocre characters who survive the Funnel into.”

Pulp Revolution (Kairos) Reader Mail: Writing Resources — “Rebuilding the culture is a monumental task toward which I try to make my own small contribution. If you’ve got the time and inclination, we can use you!”

Fake D&D (Kotaku) Dungeons & Dragons Promises To Make Its Adventures More Queer — “Seated outside a D&D app demonstration and a busy Starbucks at this annual gathering of D&D heads, tabletop fanatics, and grown adults wearing capes, Crawford told me that publisher Wizards of the Coast is making D&D more gay, and why that’s a great thing. Although the original game was created by two men who were, at one point, conservative Christians, the current team behind D&D is, 40 years later, making an effort to accommodate everyone’s escapist fantasies, not just those of its earliest fans.”

Pulp Revolution (Stuff I Like) Magazines — “Aside from HFQ and Swords and Sorcery Magazine, there’s no magazine or site wholly dedicated to S&S. Cirsova’s a smashingly good publication, but its focus is on a wide range of pulp stories, with as much sci-fi as fantasy. Grimdark Magazine’s been better than decent, but again, S&S, particularly as inspired by Appendix N is not its focus. Skelos is good but publishes very little heroic fantasy. Beneath Ceaseless Skies, once upon a time, deigned to publish some very good heroic fantasy, but that seems like it was way back in the Year One. A few others – Lackington’s, Pulp Literature among them – include a story now and then, but there really aren’t many more places to read new S&S.” 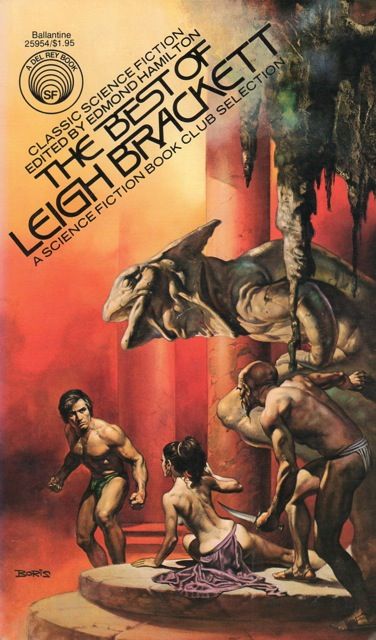 D&D (Gaming While Conservative) Who Said That? — “This isn’t about making sure the left wing crazy cakes feel better about gender swapping a few NPCs so that their fantasy game can include the fantasy of a stable and healthy gay marriage. This is about making sure that people who aren’t left wing crazy cakes know exactly who is in charge here. This isn’t about allowing some gay into some tables, this is about ensuring the gay at every table. Even yours.”

Appendix N (Actually…) Jack Vance the Magician — “Vance reputedly kept an arm’s length between himself and fandom, rarely exposing himself to real world scrutiny. He is said to have compared himself to a stage magician, whose power of illusion would be spoiled by revealing how his tricks were done. But I sometimes wonder if the truth is that he was actually rather shy of the attention he would have gotten if he’d put himself in the limelight.”

Pulp Revolution (Howard Andrew Jones) Tales From The Magician’s Skull — “GenCon was a blast. I haven’t decided whether or not I’ll go into detail, but I will share that one favorite moment took place Saturday night when I left with the oversized magazine cover from the Goodman Games/Dungeon Crawl Classics GenCon meeting and walked with it from two blocks south of the convention center to several blocks north, where the GenCon Writer’s Symposium farewell dinner was being hosted. I carried it boldly and proudly, and there were many walking the downtown streets, both GenCon goers and Indianapolis natives, who gawked, grinned, or did double-takes. I need to write Jim Pavalec and tell him about that.”

Westerns (Rawle Nyanzi) Peter Grant’s Western Redemption — “The reader will notice a large number of blacks among Walt’s crew; what seems like a politically correct interpretation of the Old West is, in fact, pretty close to reality, as the author points out in the afterword. One has to keep in mind that Hollywood westerns and spaghetti westerns are not historical documents that scrupulously show the truths of those times, but dramatizations colored by the biases of their producers.”

Pulp Revolution (Jon Mollison) The Company He Keeps — “Makes me feel like one of the Gondorian knights standing behind Aragorn and Gimli and Théoden King at the Black Gates. How the heck did I wind up standing behind these guys? Eh, I survived the disaster at Osgiliath and Pelennor Fields. I might be just a swordsman, but these guys can always use another writer at their back. Every swipe at the enemy, every purchase denied the Narrativists, serves the cause of the alt-west, and I’m proud to stand among such luminaries. There isn’t a name on that list I’d pass up a chance to read one of their books.”

Appendix N (Howard Andrew Jones) Appendix N and Fantasy Exploration — “After two or three years of exploration I’d discovered that while I liked fantasy in general, it was sword-and-sorcery (and sword-and-planet, particularly Leigh Bracket!) that I liked the most. And so I’ve been a proponent of the sub-genre ever since.”

Don’t Read Anything Before 1980 (Galactic Journey) [August 25, 1962] Two Gallons of Adventure, Extra Pulp (Andre Norton’s Eye of the Monster and Sea Siege) — “The natives of Ishkur don’t make out so well. Replace Ishkurians with Africans and you’ve got a dead ringer for a tale of noble White settlers and savage Blacks in the Dark Continent. What a far cry from Reynold’s nuanced Mahgreb series, recently published in Analog. It would not have taken much to add dimension to the story; instead, it comes off as insensitive. Nevertheless, it is a good read, and though the Ishkurians get a shallow, bigoted (by analogy) portrayal, the character of Ishbi is a bright light in a genre dominated by men.”

Novels (Vintage Novels) The Magnificent Ambersons by Booth Tarkington — “I loved the historical background to this story. Tarkington covers several decades in this book, his focus being on the changes wrought by the passing of time, on a personal scale with the fall of the Ambersons and on a grand scale with the rise of the city itself. I loved how these two threads compared and contrasted to each other. Using just a few repeated motifs – the automobiles, the town gossips, the Neptune fountain, and so on – Tarkington easily tracks the fortunes of new blood and old money, conveying information to us that the viewpoint characters themselves barely notice. Clearly this story isn’t just about a selfish young man, it’s primarily about an era in American history, and Tarkington does a terrific job of evoking this.” 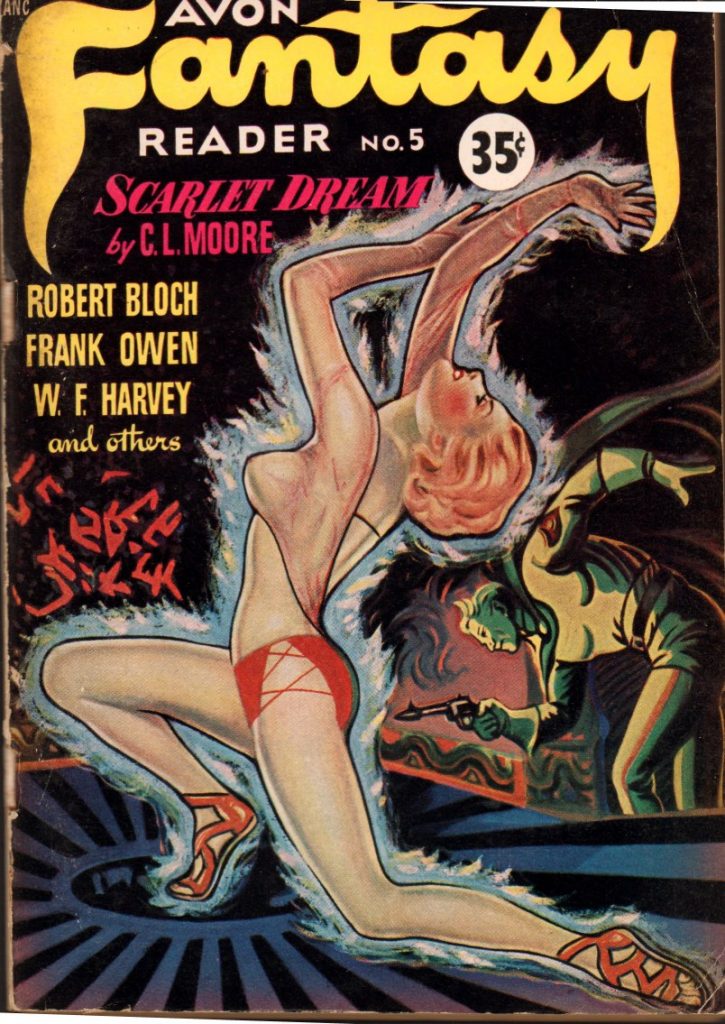 RPGs (Ron Edwards) Balancing what exactly — “The so-called Disadvantages in both Champions and GURPS: Supers outline the hero’s problems, positions, and relationships. These aren’t lack of benefit for a superhero comics protagonist at all – they are, instead, the maximum benefit he or she could possibly have. I point specifically to the jolt provided to the idiom by the Flash in the late 1950s, as re-imagined by John Broome and Carmine Infantino; and by the stupendous development of that jolt in The Fantastic Four, Spider-Man, and a varying range of others by Stan Lee, Steve Ditko, and Jack Kirby. Say it again: these are not bad things about these characters; they’re what make them good. They are the story’s frame and fuel.”

Science Fiction (Black Gate) Galaxy Science Fiction November 1969: A Retro-Review — “Comparing Galaxy to Amazing Stories, Galaxy is clearly on top. But the SF field, so used to being ahead of its time, found itself being hemmed in by reality. The U.S. had started landing probes on the Moon in 1966, with the first manned landing in July of 1969 — mere months before this issue — and the second manned moon landing happening the same month as this issue. The future, it seems, was starting to arrive. BUT! The old problems still existed, and this issue of Galaxy seemed to delve deep into race and racism; from the opening shot of the editorial, to the treatment of Nildoror and Sulidoror in Downward to the Earth, “Pennies off A Dead Man’s Eyes” is almost exclusively about racism, and it is implied that most of the people killed by Milson and Simulator RR-55 in “Broke, Hungry and no place to go” were likely black.”