RPG (Matthew Constantine): It’s no secret, Call of Cthulhu is my favorite 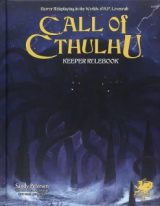 Robert E. Howard (Adventures Fantastic): Robert E. Howard was definitely a born story-teller, and in his letters to his author pen-pals, he definitely followed the rule to never let the truth get in the way of a good story. Since the anniversary of the battle has just passed, let’s look at what Howard had to say about it. In the middle of his August 9, 1932 letter to H.P. Lovecraft, Howard segues from talking about Texas gunfighters to the Battle of the Little Bighorn:

TSR (Tenkar’s Tavern): I’d choose Luke. No hesitation. No question. I’d say I’m sad to see TSR go down in flames, but this isn’t the TSR of old risen from the grave. It’s a carpetbagger tugging on the heartstrings of nostalgic gamers, seeking to pick their pockets – or worse – roll them in a dark alley and leave them naked, bereft of all valuables. This TSR is built off of deceit. Not just from how they jacked the TSR logo, but their use of imagery copyrighted by WotC to advertise their unwritten projects and their undated convention.

T.V. (The Mix): Following the recent resolution of the decades-long rights

battle between the Macross and Robotech anime series, Funimation has announced their plans to not only stream the entirety of the series, but also release the beloved cult classic in a new physical collector’s edition Blu-Ray set. 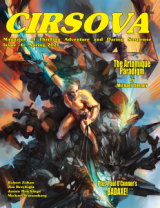 science-fiction and fantasy that are likely to appeal to fans of action over contemplation. This magazine contains three complete stories, the opening parts of two ongoing works, and a section of epic poetry, each evoking the feel of classic pulp fiction.

Art (Blackgate): My first view of that magical place came through the paintings of Tim Kirk, in the 1975 J.R.R. Tolkien Calendar, and that gorgeous, pastel-colored vision of the Shire and its environs is the one that has stayed with me. Almost half a century later, Kirk’s interpretation still lies at the bottom of all my imaginings of Tolkien’s world.

Heinlein (Ken Lizzi): I have thoughts regarding Glory Road. Don’t laugh; the 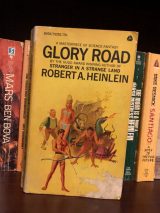 occasional thought stumbles drunkenly through my brain before realizing it’s in the wrong cranium. Not to bury the lede: I liked the book. That out of the way, I’ll share a few of my impressions.

Glory Road makes for a reasonable companion to John Myers Myers Silverlock. They are not conceptually identical, but they share certain family traits. 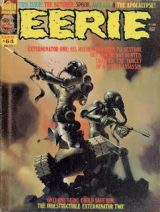 conjure a demon from the dark world to avenge their brother’s death. The creature, an elemental who calls himself “The Nameless Ravisher” (because The Grim Reaper was obviously taken), tries to drown and burn our favorite Draculonian. When both those powers fail, he commands a tree to strangle Vampi, but the sturdy vampiress proves too powerful and the creature returns to the flat of the D’Arcy sisters, where he takes out his frustration on the two elderly loons. 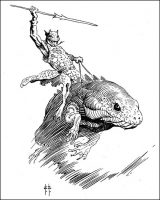 Gorobor (the Pellucidar name for Cotylosaurus). Horibs are found in a number of ‘lost world’ settings across & as a part of the inner Earth. One of the characteristics that distinguishes them from their ancient Serpent Men ancestors is their crest horns. They are a fierce & savage race of hybrid serpent & lizard men created by unknown artificial arcane science lost to history. 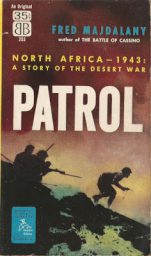 Fiction (M Porcius): British military history is one of my on-again, off-again hobbies, and I have blogged about a few novels and collections of stories by British Army and Royal Navy veterans, like No Man’s Land by Sapper, The Cruel Sea by Nicholas Monsarrat, and Take These Men by Cyril Joly.  So, when last week I saw a US paperback printing of Fred Majdalany’s 1953 novel Patrol at an antiques mall priced at $2.00, I seized it. 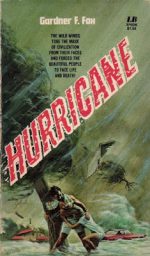 1911-1986) was a prolific comic book writer who created, or co-created, many legendary characters like Flash, Hawkman, Batgirl and Justice League. Beyond the comic industry, Fox authored stand-alone novels for original paperback publishers like Fawcett Gold Medal, Ace, Signet, Monarch and Belmont Tower. The author contributed to numerous genres including Western, Fantasy, Spy and Romance. My look at Fox’s work this month is his career late natural disaster novel called Hurricane. The book was published in paperback format in 1976 by Leisure Books.

magazine in 1967, and was then expanded to novel length in 1969 (although still a short novel by today’s standards). My copy of the book was printed in May of 1976, and I suspect I picked it up sometime in the following year. It had a sticker on one of the blank pages in the front announcing the movie version being released by 20th Century Fox.

Art (Orthosphere): Others would describe the art of the glamour painters 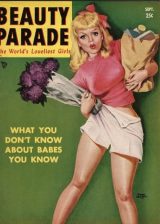 somewhat differently, even while appreciating its achievement.  Dian Hanson, writing in The Little Book of Pin-Up – Driben (2015), opines that “Driben’s girls couldn’t really be called ‘good,’ as in ‘good girl art,’ a common synonym for pin-up” because “their costumes were consciously trashy, their heels whorishly high, and their thighs just far too voluptuous.” 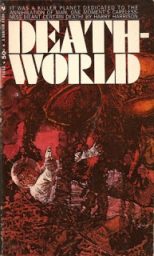 Fiction (Ricochet Reviewer): A professional gambler finds himself on the most lethal planet in the known galaxy, where he tries to help a dying colony cope with the dangerous indigenous lifeforms and achieve rapprochement with a human faction that has managed to live peacefully with its surroundings. 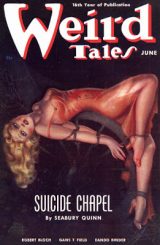 continues to slither forward–today with three 1938 stories by Robert Bloch!  I read all three of these tales in scans of the original magazines edited by Farnsworth Wright available at the internet archive, where, free of charge, you can not only read prose and verse by the  pioneers and immortal giants of weird literature, but admire illustrations by Margaret Brundage and Virgil Finlay and advertisements for the Rosicrucians.

Heinlein (DVS Press): There are only two things people seem to take away from Starship Troopers by Robert Heinlein: Power Armor and “Service Guarantees Citizenship” (unless you are James Cameron, in which “bug hunt” is also a takeaway). For those who focus on the latter, Starship Troopers might as well be Heinlein’s only work, which is not so much an indictment of the readers as it is an acknowledgment of the power of that idea compared to Heinlein’s other ideas (which were often quite liberal, by the way). 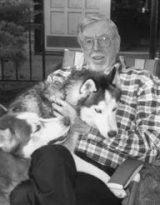 February 8, 2004) was an American author of over 200 novels in many genres who met with early success in horror, but went on to become a bestselling author of men’s adventure and western series fiction. His 1980 novel The Devil’s Kiss launched his career as a full time writer.  He wrote more than 20 horror novels through the mid-1990s before refocusing his efforts on action/adventure series and westerns, eventually hitting the USA Today bestseller lists. 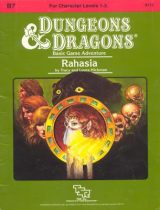 Rahasia, a lesser known work of the Hickmans. Before diving into it, a brief bit of history. The earliest version of Rahasia, which I have never seen, was self-published by the Hickmans in 1979, along with Pharaoh (another Hickman effort for which I have largely positive feelings). In 1983, Rahasia was released by the RPGA, along with its follow-up, Black Opal Eye. Then, both modules were combined under a single cover as module B7, which is the only version of these adventures I’ve ever seen. I understand there are a few differences in content between the various editions but they are mostly minor.

Comic Books (Magazines and Monsters): At first sight, this magazine 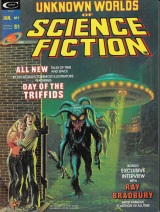 (published in 1975) doesn’t look like anything special. Oh the cover by Kelly Freas (with alterations by John Romita), is very cool, but sci-fi hadn’t really hit it big yet in the mainstream (pre- Star Wars, and Star Trek films). What Marvel did though, was bring in stories written by some of the greatest writers of the genre, and adapt them for comic book format. When you can slap the name Ray Bradbury on your cover, it’s going to sell some books for sure.

Edgar Rice Burroughs (Orthosphere): In Burroughs’ Amtor — A Satire of 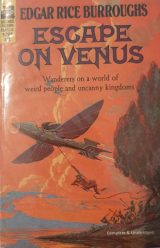 Ideologies, I remarked that in Edgar Rice Burroughs’ Venus series, issued in four books from 1932 to 1944, the reader could discern the author’s theory of ideology or, at any rate, his notion (let us say) of ideology.  I wrote that, for Burroughs, “Ideology pits itself against life as such”; and that, “Every ideology is [in Burroughs’ judgment] a nihilism that, standing against vitality, beckons the moribund.”  The reader will find in the first three Amtor books (Pirates of Venus, Lost on Venus, and Carson of Venus) strong satirical rejections of Communism, Trans-Humanism, Eugenics, and National Socialism.

Review (With Both Hands): Violence of Action by Jason Anspach and Nick Cole [Amazon link] is our opportunity to see the Rangers go raiding. To do what they do best: kill things and break stuff. The non-linear flow of the pseudo-memoir style of the Forgotten Ruin series works really well here, as we shift back and forth between the actual hit and the weeks of planning that led up to it.

Art (Goodman Games): One of the benefits of being an extraordinarily 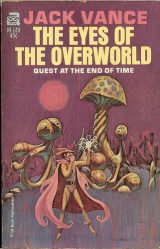 productive and highly-reprinted genre writer during the mass market paperback publishing boom of the mid-twentieth century is you get a terrific amount of amazing visual art forever associated with your name. Jack Vance, author of over 60 books (whenever you see ‘over’ a certain number, that’s a pretty big clue that the author in question is so prolific that it’s actually hard to get an exact count!), has published enough unique paperback editions to fill an entire room. A big one.

Cinema (Apollo Magazine): Few film-makers have left their mark upon the medium on quite such a grand scale as Ray Harryhausen (1920–2013). Over the course of a remarkable career, Harryhausen extended the technical possibilities of cinema and the visual language of science-fiction and fantasy film. Having honed his stop-motion work on early Cold War creature features such as The Beast from 20,000 Fathoms (1953), he went on to create the relentless skeleton warriors of Jason and the Argonauts (1963) and the giant mythological monstrosities of Clash of the Titans (1981), the last of the grand pre-CGI spectacles. 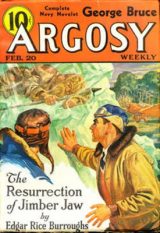 favorite authors when I was a kid, but there was plenty of his work I never got around to, and I’ve read him only sporadically since then. I want to go back and catch up on some of that unread stuff, and I’ve started with “The Resurrection of Jimber Jaw” (great title!), a novelette that was published originally in the February 20, 1937 issue of ARGOSY, the lead story with a good cover by Emmett Watson. 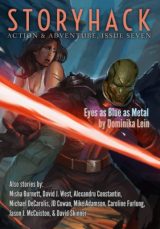 New (Misha Burnett): The latest issue of Storyhack Magazine is now available. In it you will find, among other stories, a new Erik Rugar mystery, “That Summer’s Evening Long Ago”. Savvy readers will recognize the title as a line from Lewis Carroll’s poem “I’ll Tell Thee Everything I Can” which the White Knight recites to Alice in Through The Looking Glass. I’ve always loved that poem, and it seemed to me to capture the mood of the story.

Remembrance (DMR Books): So, jump ahead to the summer of 2008. I’m in the midst of my rediscovery of A. Merritt’s work. At the same time, I learn that Paizo is going to publish an excellent edition of The Ship of Ishtar in 2009; the best in sixty years. I decided to ‘prime the pump’ and give the Paizo edition what boost I could by doing a podcast dedicated to The Ship of Ishtar ahead of publication. I contacted David Drage and he was all about it.