Review (Brave New World Media): A new, expertly edited collection of J. R. R. Tolkien’s writing on his elaborate mythology reminds us of its greatness. When J. R. R. Tolkien (b. 1892) passed away in 1973, he left an immense amount of unpublished writings — much of which consisted of his own personal Middle-earth mythology, known as the legendarium, begun just prior to World War I. After his father’s death, Tolkien’s youngest son, Christopher (1924–2020), became his literary heir, publishing his father’s The Silmarillion in 1977, Unfinished Tales in 1980, the twelve-volume History of Middle-earth (1983–1996), the three great tales of the First Age, as well as several books on various non-Middle-earth mythologies, such as on the Nibelungenlied, Beowulf, and King Arthur.

Robert E. Howard (PC Gamer): The folks at Funcom must really like a good

bit of nude dudes swinging swords and slaying monsters. With Age of Conan and Conan Exiles under its belt, the developer has cut to the chase and bought the rights to Conan the Barbarian outright, with plans to create The Avengers of the Robert E. Howard universe. 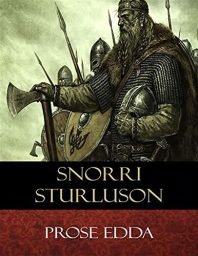 Massachusetts. His father was a Harvard man and young Arthur followed in the paternal footsteps, also attending Harvard, where he earned Bachelor’s, Master’s and Doctoral degrees in 1909, 1911, and 1916. His primary focus concerned the sweet science of philology. Brodeur published his highly-regarded translation of Snorri Sturluson’s The Prose Edda in 1916. It can be found online here.

Gaming (Wert Zone): In a surprising move, Piranha Games have announced a second expansion to MechWarrior 5, their real-time mech simulator in the BattleTech universe.

World of Warcraft (Bounding into Comics): A pair of paintings featured in World of Warcraft since the game’s initial launch, one slightly sexualized and the other a bikini pinup, have been censored by Blizzard.

Comics (Bounding Into Comics): James Bond actor Daniel Craig recently reversed course and is now claiming that the iconic character created by Ian Fleming should not be a woman. 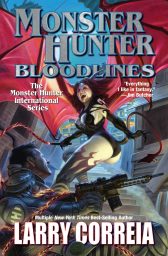 Robert E. Howard (Arkhaven Comics): Conan the Destroyer was a bad movie and it didn’t need to be.  The original script would have been a superb sequel to Conan the Barbarian.  But a string of terrible decisions ruined what should have been a great movie in the name of maximizing its box office appeal. The original Conan movie did well but the studio felt there was room for improvement in the bottom line.

Review (DMR Books): You shouldn’t judge a book by its cover, but 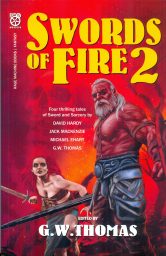 sometimes as with Swords of Fire 2 the damn cover is so striking that I feel like I’m drawn to it. The reds and oranges of the background hint at some unseen conflagration and the faint skull above the woman lends an air of sinister supernatural menace. Both characters look determined to sell their lives dearly against something we cannot see. In short the cover itself sold the book to me. I couldn’t wait to read it. 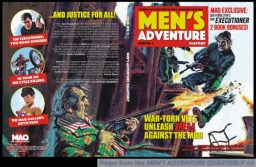 New (Mens Adventure Magazines): We dubbed MAQ #3 our “Vigilante Justice” issue, since it focuses on stories about tough but moral men who take on and take out mobsters and other bad guys deserving of justice dealt “with extreme prejudice.”

It’s an over-the-top scene used for one of the stories included in MAQ #3 – “The Amputee Vengeance Squad’s Mafia Wipeout.” 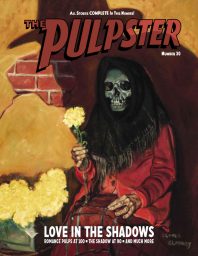 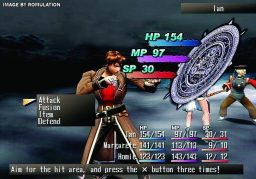 Games (Kairos): A game recently lent to me by a friend prompted me to reminisce about the last generation of games before Gaming Ground Zero. It’s hard to imagine now, but the PlayStation 2, the original XBox, and the GameCube were the last consoles to primarily use physical media, feature mainly offline play, and offer customers complete games at purchase.

even the toy industry all changed when Star Wars was released in May of 1977. For a time, the brainchild of George Lucas dominated the toy stores and allowance money of kids of my generation due to the awesome offerings by Kenner. While its seems that the iconic and nearly holy Kenner toyline was nothing but a raging success, there were some failure among the various Star Wars toylines, and one being the subject of this installment of Military Sci-Fi Toys, the Star Wars MICRO Collection from 1982. 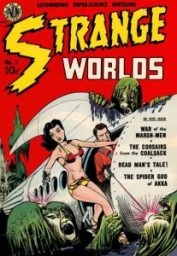 Opera comic created by John B. Michel and possibly continued by Gardner F. Fox (who was writing “Crom the Barbarian” for the same comic.) The character appeared in the early issues of Avon’s Strange Worlds. (If Fox did write these comics, his years of writing for Planet Stories couldn’t hurt.)  Beginning with the second issue, Wally Wood drew a table of contents in black & white. 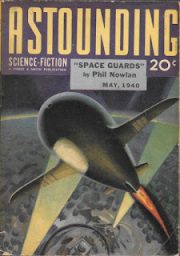 Science Fiction (M Porcius): A few days ago we read Jack Williamson’s 1934 tale of a half-Chinese mad scientist who wanted to create a super race, “Wizard’s Isle.”  Earlier in the week when I was digging through the pile of SF anthologies here in the MPorcius Library in search of stories by L. Sprague de Camp I took note of some stories by Williamson; today let’s spend some time exploring (a tiny portion of) the body of work of the second recipient of the title of SFWA Grand Master.

Fiction (John Houlihan): I’m always tickled to be part of any anthology and for this one, I contributed Nyarlathotapp, an original short story.  Nyarlathotep has always been a fascinating figure within mythos circles: the dark pharaoh, the crawling chaos, the herald of the Outer Gods, and I’ve always thought of him as an even more evil Loki, with his signature move the spreading of doubt, insanity, and death.

letters page in the June-July 1950 edition of EC Comics Crypt of Terror. You could be forgiven if you mistook that dramatic introduction as the opening salvo from any game master at any table-top role-playing game. In fact, it’s also fairly easy to see how Gary Gygax, the main co-creator of Dungeons and Dragons (and an entire gaming industry) would fess up to being influenced by the art and storytelling found within the comic books of his formative years.

Cryptozoology (Tentaculii): Open and seemingly new online, a run of the journal Cryptozoology (1982-1996), a journal of apparently scholarly articles on ‘yeti-hunting’ and suchlike. May be of interest to writers seeking to glean some obscure but well-grounded nugget of topographical inspiration on monster-matters. 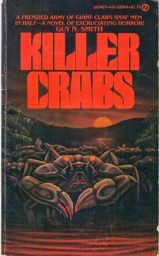 Australia’s Great Barrier Reef, and survivor Cliff Davenport from the first book is called in as an advisor.

Tolkien (Dimitra Fimi): One of the most iconic scenes from Peter Jackson’s 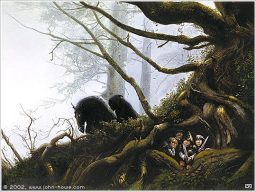 cinematic adaptation of The Lord of the Rings: The Fellowship of the Ring is the moment when Frodo, Sam, Merry, and Pippin, having set off from the Shire towards the great unknown, hear a horse approaching and quickly hide underneath a tree root, where they just about manage to escape the Black Rider who comes looking (see stills below):

Misc (Geotrickster): Today does, however, look a lot like Europe of the Thirty Years War and the Britain of the era of its civil wars. Indeed, the ideologies and struggles of that time plague us still. Our present era, I would argue, is a very Cromwellian one. For those of us who oppose this and find it the potential start of a new dark age, it becomes relevant to familiarize ourselves with how this happened before and how such a time was overcome and displaced. Having already dealt with the lessons that can be learned from the Thirty Years War before, I now wish to move towards the British origin point of so much of present ideological pathologies.