Horror Fiction (Old Style Tales): When H. G. Wells first published “The Invisible Man” in 1897, the title alone ensured its success. Invisibility fascinates, attracts, and terrifies. It’s allure rests in the ability to escape notice (and with it criticism, self-consciousness, and the power of the other’s gaze), to be freed from social pressures (to be pretty, dress well, be polite, stay put, etc.), and to have the freedom to enter any unlocked space without challenge. 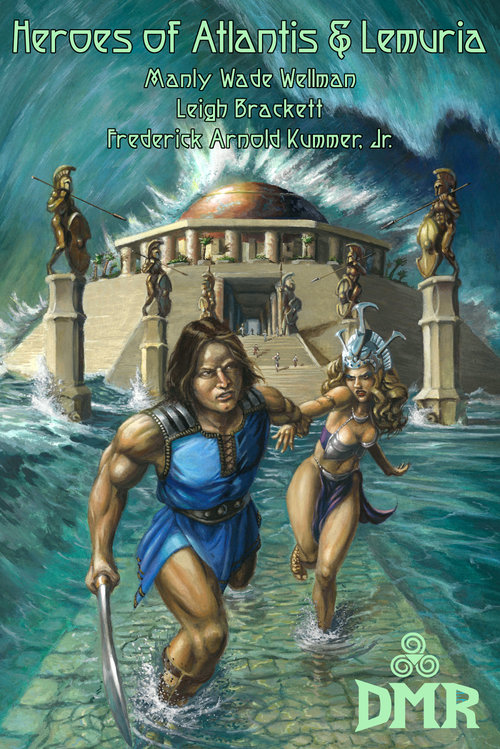 Wellman created a fantasy hero named Kardios, who was the last survivor of Atlantis. The five tales of Kardios Wellman penned appeared in anthologies such as Swords Against Darkness and Heroic Fantasy, which are long out of print. For decades sword and sorcery fans have clamored for all five stories to be reprinted in a single collection, but their cries fell on deaf ears.

D&D Fiction (Brain Leakage): Before seeing this tweet, I actually had no idea the D&D novel line had been discontinued. A little googling reveals it was killed off quietly, with Wizards of the Coast/Hasbro making no official announcements and enforcing NDAs against the writers involved. Anyway, Black has a good point in regards the potential benefit of a program like this, at least from the WotC/Hasbro perspective.

Queen Cleopatra was published by Bobbs-Merrill in 1929. Set in the years between the summer of 48 B.C. (the battle of Pharsalus) and the spring of 44 B.C. (the Ides of March), this story tells of the tumultuous end of the Roman Republic and the bloody beginning of what would become the Roman Empire from the viewpoint of one of the most famous and alluring women in all of history: Cleopatra.

Robert Heinlein (Tip the Wink): Have Space Suit–Will Travel by Robert A. 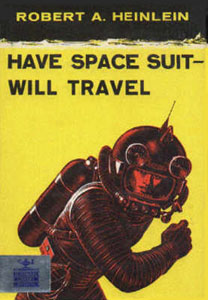 Heinlein. Scribner’s & Sons, 1958. Juvenile novel # 12 in the series. Published in both hardcover and paperback that year by Scribner’s as part of the Heinlein juvenile series.

Alternative History (According to Quinn): It diverges from real history in 1632 when Matsakura Shigemasa, a strongly anti-Christian daimyo (Japanese feudal lord) escapes an assassination attempt that might have been ordered by the Shogun due to his misrule and brutalization of the peasantry. Per the Wikipedia article he was planning to launch a maritime invasion of the Spanish colony of Luzon in the Philippines!. Not being dead this time around, he’s able to launch the campaign with the ass 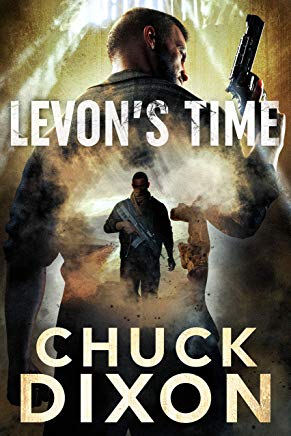 series from comic book legend Chuck Dixon will be available September 4th but you can preorder yours today!

The latest release in the relentless Levon Cade series is full of unforgiving action. Following the events of Levon’s War, Levon Cade is arrested in Turkey and imprisoned in a hellhole on the Black Sea coast. In order to come home he must strike a deal with the United States government, and that comes at a price. 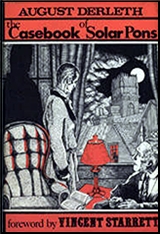 I wonder if this story marked the first appearance of Solar Pons’ brother Bancroft, a man of some size and weight and who worked, not surprisingly, for the British Foreign Office. Dead in a locked room is an eccentric breaker of codes and ciphers, found slumped over the latest set of papers he was working on.

RPG (Skulls in the Stars): Dungeon Masters Adventure Log (1980). In my

old school post, I mentioned the Dungeon Masters Adventure Log, which intrigued me. Well, soon afterwards, I got myself a copy, and it is charming! A DM could use Adventure Log pages to keep track of characters and monsters, as the sample page shows! 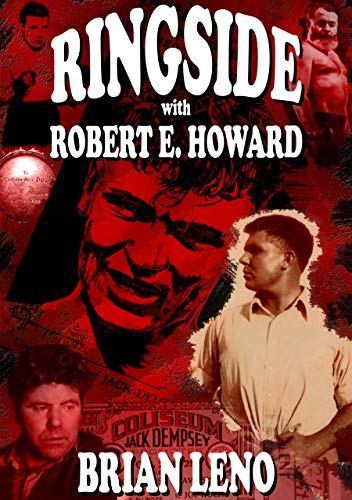 went down, it dragged a ton of links to Brian Leno posts with it — Brian did most of his blogging there before he wandered over here and took over the landscape with his maniacal Autograph Hound obsessions.

One of his major postings was a ten part dive into the life and times of Texas boxer Kid Dula, one of Robert E. Howard’s faves. Anything about the Kid on this site you can access via the tag below — I’m sure my posts contain dead links to that mini-magnum opus.

RPG (The Mixed GM): The problem is when D&D gets involved. I have seen too much “how powerful is X in canon” or “this random book I found says Y, that’s canon right?” lately. These statements appear to be directly related to the game we are playing, as if something outside the GM determines “canon” in the game world. Let me be clear.

Fiction (Davy Crockett’s Almanac): Zorro is 100. He made his debut in the

first installment of Johnston McCulley’s “The Curse of Capistrano” in the August 9, 1919 issue of All-Story Weekly. That serial, good as it is, might have been forgotten but for Douglas Fairbanks, who bought the film rights and turned it into the huge hit “The Mark of Zorro” in 1920. That film is still plenty of fun, as you can see for yourself at the end of this post. But McCulley’s original story is even better.

RPG (Old Skulling): This is a sword and sorcery RPG, inspired by pulp literature and comics. Although this falls into the fantasy games category, there are a few key differences that might be worth mentioning between generic or high fantasy and sword and sorcery. This section will briefly outline some of the core themes of sword and sorcery stories and how to apply them to the game.

RPG (Grey Hawk Grognard): Long-time readers of this blog, and even 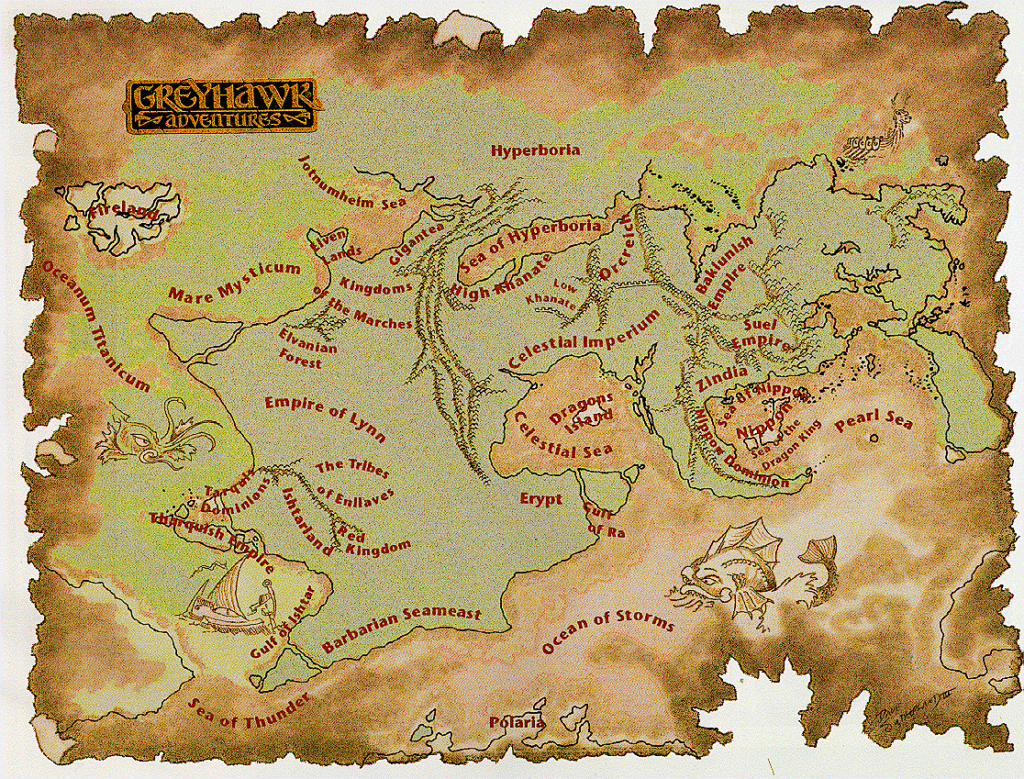 longer-time Greyhawk fans, will recall that originally the western portion of the continent known as Oerik was completely unknown to us. All we had was a partial map included in the original 1980 Greyhawk folio. As you can see, the Flanaess proper is in the northeastern corner of the continent, and the rest is left completely blank save for coasts and mountain ranges.

Gamergate (Brian Niemeier): The man in the picture above was accused of 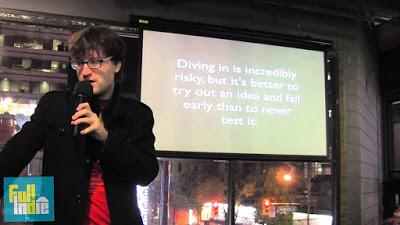 sexual assault by conniving Jezebel Zoe Quinn. Are the allegations true? We’ll never know because he’s dead now. Game developer Alec Holowka killed himself on Saturday morning. His suicide followed his public drumming out of the industry as a result of Quinn’s accusations.
Quinn, it should be noted, is the predatory tart whose escapades may have incited #GamerGate. Since then she’s ridden the professional victimhood gravy train, raising $80,000 for a Kickstarter .

Fiction (Trolls Myth): This novel (link is an Amazon Affiliate link) is of the

Tolkien (Imaginative Conservative): The re-publication of Tolkien’s collected (though by no means comprehensive) letters should help place the English author as one of the great Christian Humanists of the twentieth century, in league with his closest friend C.S. Lewis, his sometime rival, T.S. Eliot, and other greats such as Christopher Dawson, Romano Guardini and fellow traveler Eric Voegelin. Contrary to Rissek’s assertions, it was Tolkien’s desire, through sanctified and created myth, to attack the “annihilating traumas” not just of the twentieth century, but of modernity at large.