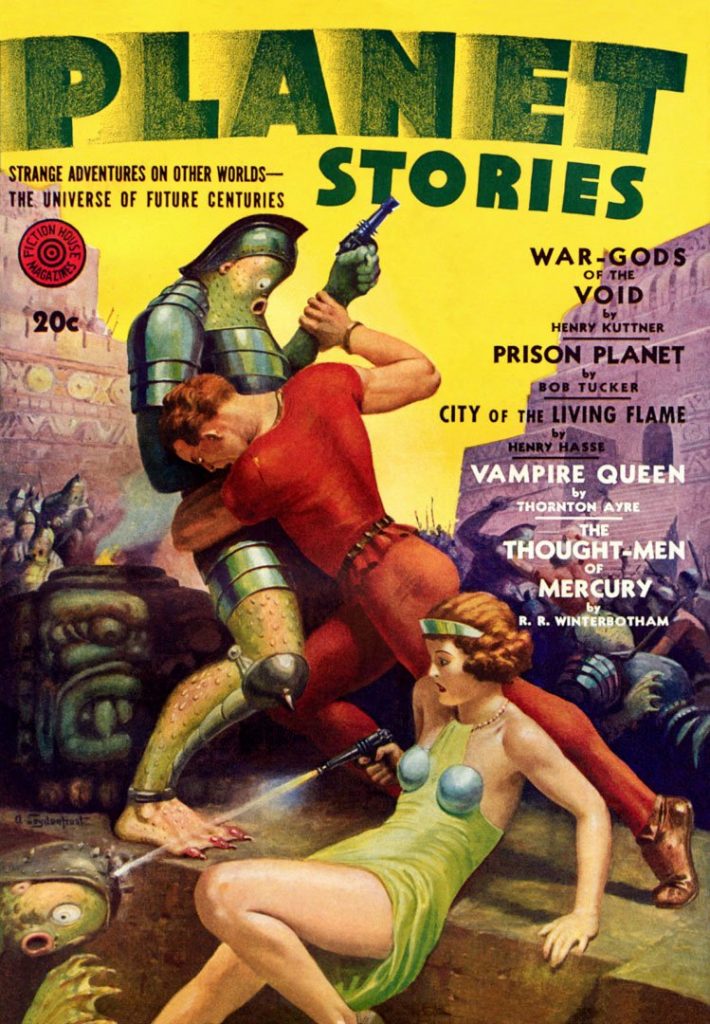 Pulp Revolution (Jon Del Arroz) Behavioral Observations In Science Fiction — “Think about it. Six years of working hard still can’t get a person accepted and embraced without a miracle, four months of chatting with some folk online create unbreakable friendships. I’m the same person in both situations, so are you. There’s nothing different there other than the people and the mindset. And that’s why more fans keep coming to me and to other authors involved in this very real revolution in science fiction.”

Star Wars (The Washington Post) ‘Star Wars’ is the ultimate conservative morality tale — “On the other hand, the Rebels, a loose collection of ragtag freedom fighters, staged an all-out attack on the Empire to erase it from the galaxy. They were a small, motivated force who learned they could defeat a large, unmotivated force. It was George Washington against the British Empire.”

D&D (Save Versus All Wands) Is D&D About Storytelling? — “Once, they were in a city, trying to see a high-level wizard so that he could identify a magic item, or some such. The wizard’s assistant was being obnoxious. He would stick his hand out the little window of the door in the wizard’s tower and demand money, ‘promising’ to fetch the wizard. But he never did. Rather, he would just open the window again, stick his hand out, demand more money and shut the window. The players would knock yet again. Out went the hand for more money. And so on. I can’t remember whether I rolled that or just made it up or whatever. But that irritating little man just kept sticking his hand out. At a certain point, the fighter said, ‘I’ve had enough of this.’ He took out his axe and chopped the man’s hand off.'”

#SpaceOperaMonth (The Mixed GM) What Is Wrong With Steampunk & How To Fix It — “The Steampunk outfit does not point at anything. It’s just a funny outfit. Imagine if a man went to a convention with a full body spandex suit, a helmet, a jetpack, and a lasergun and said they were a ‘Spaceman’.”

Pulp Revolution (Injustice Gamer) Injustice Quick Reviews 2.8 — “I, the One by Dominika Lein- I picked it up after the second mention I saw on the Castalia House blog, and I avoided the review until I’d read it. There’s an interesting, if somewhat nihilistic, story here. There’s a couple of nice turns from and to the weird fiction side of things.”

Pulp Revolution (Seagull Rising) Don’t Take My Advice — “The dirty little secret is that I don’t world-build. I story-build. The background of every one of my books contains just enough information to paint a broad picture of the situation, and enough background to drive the plot or motivate the characters, but for the most part my settings are designed to fit the story and not the other way around. I’ve actually gone back and changed entire universes in a few instances in order to bend them to the needs of the story.”

D&D (Walker’s Retreat) Practical Liminality Explored: AD&D 1st Edition — “While Greyhawk is mentioned, the rules don’t specify a setting. They give you enough to imply one, but that is only implication. Instead, the Game Master gets told multiple times that setting decisions are his to make, and that he should bring those decisions forth to players when that information matters to their decision-making (and not just during play; if Dwarves are not in the campaign, players need to know at character generation. The tools to create verisimilitude are present, but it is on the GM to make it so.”

Appendix N (PC Bushi) Can Read SFF: The High Crusade by Poul Anderson — “I liked the fact that I didn’t have to wade through the latest diversity fashion archetypes. It was nice to not have some politically-correct notion shoved in my face over and over. That’s not always the case even in other professional fiction (I’m looking at you, later Cherryh and McMasters-Bujold works), so it was nice. However, if you have a problem with Christianity, Faith, or traditional roles for men and women, this book is going to trigger you over, and over, and over, and over.”

Pulp Revolution (Digital Rain) Still PulpRev — “In mainstream writing groups, there is a con-game sometimes played of trying to get and get and get without ever having to give anything in return. A lot of people will PROMISE to give back, but never will. There is little trust and sincerity because they are so self-interested that it paralyzes growth of any actual community. They hold what few cards they have close to their chest and do their best to not share a cent while acting like they are ‘writers’ best friend’. This goes for information, ideas, applicable advice, as well as actual monetary support – they don’t want anyone else getting a leg-up from them so they avoid sharing anything of merit or making actual connections. Anything that is given in return, is done so begrudgingly. These types would rather disappear before that happens, taking everything they got with them just like a good old con in a local town.”

Publishing (Kairos) Writing Fiction vs. Selling Fiction — “On a personal note, I used to hate sales, too. I did my tours in the Christmas retail trenches trying to convince people that they wanted useless junk they couldn’t afford. I’m not talking cool toys for grownups with some entertainment value. I’m talking extended warranties on CDs and store credit lines. It was miserable. In the middle of that drudgery, I sold my first short story. Suddenly I learned that people wanted to read my writing, and what’s more, they’d pay me for it. Now I’ve come to appreciate sales. I even love sales. Because there are people out there who want to read my stories, but they won’t know it until I tell them that my stories exist.”

Pulp Revolution (Amatopia) Book Review: Nethereal (Soul Cycle Book I) by Brian Niemeier — “So why do I say ‘science-fantasy’? Aside from the immortal Gen race, there is a substance called ether that the spaceships run on (hence the name ‘ether-runner’). This ether can also be manipulated via Workings (think: magic); indeed, it is through Workings that the steersmen control the ether-runners. There’s also gun fighting, swordplay, warrior-priests, demons, the undead, body-swapping, necromancy, and heavy theological discussions about life, the soul, and everything else that matters.”

She Didn’t Read Dangerous Gamers (Elaine’s Idle Mind) The Wokeness Treadmill — “No matter how woke the tech industry gets, the babbling heads of the fourth estate will always be there to assert their moral superiority. I suspect it stems from repressed feelings of aggression. In earlier years we’d simply throw chairs and punches at each other, but it was an uneven match and the weak ones complained. So now we’ve turned to morally whaling on the unwoke.”

Pulp Revolution (Seagull Rising) A Newcomer’s View of the PulpRev — “My advice, for what it’s worth, is to continue welcoming new writers with open arms. Be wary, but welcoming. And start looking for ways to build up a stronger reader base rather than a writer base. Our weak link right now is that the people most drawn to the #PulpRev are those who have thought about what modern literature is missing and set out to correct its shortcomings. But there are throngs of readers out there looking for us who just don’t know we exist. Once we crack that nut, you’re going to see a quantum leap in our profile. Jon Del Arroz has been doing yeoman’s work to that end, but the movement as a whole has a long way to go.”

The Commentariat (Gaming While Conservative) Emperor Ponder’s Book is Available: “Dangerous Gamers.” — “Emperor ‘Frisky Pagan’ Ponders – or is that Frisky ‘Emperor Ponders’ Pagan – decided he didn’t have enough monikers so he wrote a book that has his real name on the cover…or is it? It’s a look at GamerGate and what he calls the ‘Commentariat’ but I call ‘those smug, deluded jackasses’. I have a copy and will be reading it and writing up my thoughts on it, and they will be positive because I like EFPP and appreciate that he did me a solid by reading my short stories and talking about them.”

Science Fiction (Jon Del Arroz) #SteampunkMonth Retro Review: 20,000 Leagues Under The Sea — “I’ve read a lot about how there were originally intended themes of anti-imperialism, etc. that Verne really wanted to play up in his battle against various empires, but the edited version of the book we got removed most of that content. Perhaps that’s the case. It’s a cool concept, this submarine contraption. During the day that alone may have been enough to make this book a hit, now if it were described a little better would provide a cool alt-history content take. However, all the cool promises of that didn’t really get fulfilled. Instead we got a catalogue of fish.”

Pulp Revolution (The Mixed GM) Support Your “Local” Content Creators — “I love the Pulp Revolutions and what it is doing. I have been intentionally trying to buy and read as much as I can. I don’t have any writing talent to add more written works, I don’t have all the money in the world to be a patron, and I don’t have a massive reach with my internet presence. What I can do is leave Amazon reviews and tell whoever I can that these are good stories. And I have not done a great job of that. The reviews I write may not be the most insightful or influential, but gosh darnit, I am going to do what I can!” 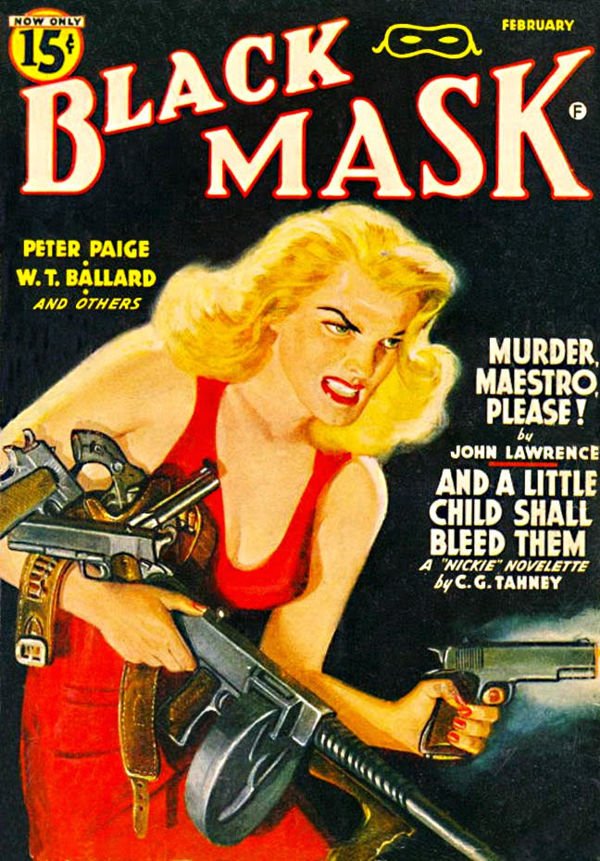 Pulp Revolution (Misha Burnett) Looking For Adventure And Whatever Comes My Way — “Pulp Rev will make use of the short fiction format for innovation. The technological earthquake that continues to shake up the fiction publishing market has created as many opportunities as it has destroyed. I don’t know exactly how short fiction will be published ten years from now–or even next year–but I am convinced that the market is there and that people who are smarter than I am will work the bugs out of the distribution channels.”

Pulp Revolution (Alexandru Constantin) Pulp Revolution Listopia — “Jon Del Arroz made a Pulp Revolution list on goodreads, an excellent idea. But, included are some novels written way before the whole pulp rev and some, like Correias Son of the Black Sword, feel more like epic fantasy than pulp. I’m not a fan of applying the pulprev label retroactively and to writers that are not part of the discussion. If SotBS is considered pulp because of its action and adventure than where do we stop? Should we add all the Drizzit books? How about most of Mark Lawrence’s Broken Empire, they are clearly inspired by a Dying Earth aesthetic and filled with action? Are all the Pathfinder novels now pulprev?”