Cinema (Horror Obsessive): I’m a huge fan of Lovecraftian horror. I’ve read a bunch of Lovecraft’s stories, and I absolutely eat up films that riff on the themes and ideas he popularized. So from the moment I heard about Freeze, I knew I had to check out the trailer. Not only is this an obvious homage to all things Lovecraftian, but the movie also won Best Feature Film at the 2022 H. P. Lovecraft Film Festival last month, so I was pretty sure it would be right up my alley. And from the looks of it, I was 100% right. Here’s what the movie is about: 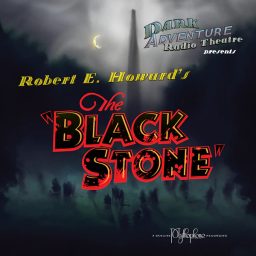 Howard’s tale of horrors in Eastern Europe in a 1930s-style radio drama. The story bounds to life with a cast of nineteen professional actors, thrilling sound effects and an original orchestral score by Troy Sterling Nies. Click here for more information about our other Lovecraft stories in the Dark Adventure Radio Theatre series. They’re like movies you can enjoy with your eyes closed. 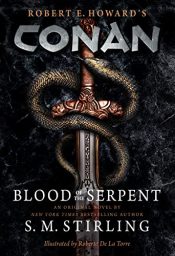 Firearms (Special Ops): The Walther P88 will be remembered as Walther’s 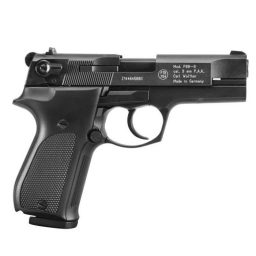 last metal-framed service handgun. Walther pistols have been well-known since the 1920s, and they were the first to make a success of double-action trigger system using a de-cocking device. Their first significant caliber locked-breech pistol was the Pistole 38, designed for the German Army, and first issued in 1939. This used a block locking system used by all Walther heavy-caliber pistols ever since and was adopted by Beretta and other manufacturers. 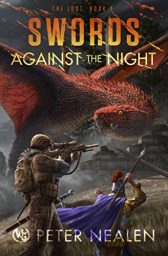 Review (With Both Hands): When I wrote my review of Darkness and Stone, book 3 in Peter Nealen’s “The Lost” series, I said Nealen had done a great job wrapping it up. Nealen wrote me and let me know that there was plenty more where that came from. I still think Nealen made a reasonably complete arc in those first three books, but I’m not at all sad to stand by Conor McCall again as he brings justice to the unholy things that terrorize the world.

New (Cirsova): Tales of the Mongoose and Meerkat Volume 2: The Heat of 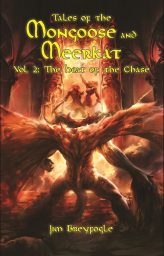 the Chase is Out Now on Amazon! The retail version of Mongoose and Meerkat volume 2 is available now! Even if you’ve been following along in the magazine, there’s plenty of new and exciting bonus content to entice you, including an all new fantasy murder mystery novella, Thunderhead, TTRPG content, and additional artwork from DarkFilly and Raven Monroe [Machi the Lazy Witch, Cookies & Scream].

Games (Walker’s Retreat): The point I want to focus your attention upon is that they are going to retroactively apply this to all products going forward. That means throwing stuff they don’t like down the Memory Hole. This isn’t the Boomer-tier tossing down the Memory Hole that I’ve talked about all week. That’s thoughtless narcissism. The Death Cult is doing this willfully, willingly, and deliberate malice aforethought.

Science Fiction (Tellers of Weird Tales): On Tuesday, September 27, 2022, I made an entry called “Fantasy Against the Machine.” I began with this sentence:

If you’re looking for an example of the antipathy that fantasy might have towards science fiction, That Hideous Strength by C.S. Lewis (1945) would be a place to start.

I base that on ideas and themes from Lewis’ Space Trilogy, especially That Hideous Strength, but also Perelandra (1943) and this passage:

Tolkien (Notion Club Papers): In Tolkien’s legendarium, Men and Elves are the same ‘species’, but the fate of their spirits are very different. Men die and their spirits leave the world, and go… nobody knows where. But Elves – whether they live on Middle Earth and fade, are killed and return to the realm of spirits, or live in the undying lands – are bound to the fate of the world. This means that Elves die when the world ends; and, what happens to their spirits is not known. 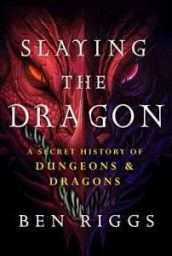 in the Eighties, TSR, had a fascinating story that has mostly been shared around by gamers at cons as well as word of mouth for decades. This isn’t the story of the Satanic Panic that both vilified gamers and drove sales through the roof. No, Slaying the Dragon: A Secret History of Dungeons and Dragons is a story of the internal politicking that led to the rise of TSR as a corporate entity under Gary Gygax, his loss of the company to Lorraine Williams, and how it was ultimately acquired by Wizards of the Coast before becoming yet another corporate culture. 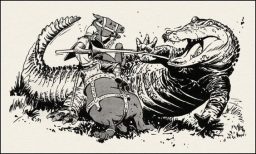 Art (DMR Books): “[Hal] Foster would be my main influence.” — Frank Frazetta, 1994 A few months ago, I wrote a tribute to the hugely influential comic writer/artist, Hal Foster. In it, I used the Frazetta quote above and discussed the high esteem Mr. Frazetta held for the artwork of Foster. One of the Prince Valiant panels I included in that post was this one: 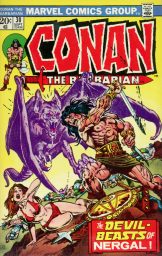 Barbarian started with the evolution of artist Barry Windsor-Smith as he cast off his influences and found his first maturity as an illustrator. He would leave comics behind for a number of years, and this allowed the more classically-oriented penciller John Buscema to step in and set the look and feel of Conan for many years.

D&D (Goodman Games): It’s seven adventures in a single hardcover. It’s the new DCC Tome of Adventure, Vol 1! The DCC Tome of Adventure Vol. 1 gathers together the initial offerings of the Dungeon Crawl Classics role-playing game in one book, all under a new cover by DCC artist Doug Kovacs! It’s over 200 pages of excitement that makes for a great gift or the perfect addition to your own collection. Let’s take a look!

RPG (Jon Mollison): Over the last couple of years, the lads in the #BROSR 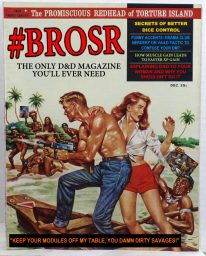 have reinvigorated the ossified field of tabletop RPGs by incorporating the solid design principles laid down by the giants of the pre-1980s collapse.  We’ve spilled a lot of ink – and I’ve published a number of videos – documenting the process and results, but we have not as yet thrown down an easily digestible introduction.  Let’s fix that with a short blogpost. 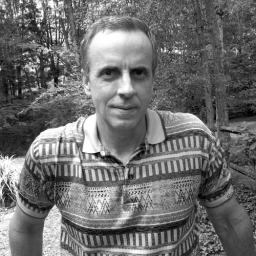 Authors (DMR Books): Please introduce yourself and tell us about your background as a writer.
My name is Michael C. Tuggle, and I write speculative and mystery fiction under the name M. C. Tuggle. Born and raised in rural North Carolina, I grew up in an environment that stoked my imagination. I heard tales of the War Between the States and of former Indian settlements nearby.

Science Fiction (Isegoria): In what ways, Casey Handmer asks, does The Moon is a Harsh Mistress (and other novels in the genre) fail as an instruction manual? We know that a Moon city is not a good place to grow plants, that water is relatively abundant on the surface near the poles, and that underground construction is pointlessly difficult. So any future Moon city will have to be structured around some other premise, which is to say its foundational architecture on both a social and technical level will be completely different.

beautiful period to have a book and pulp convention! Temperature in the 70’s which is very unusual for November. Though the show is officially only one day. My friends and I celebrate the occasion from Wednesday through Saturday and some years even Sunday. 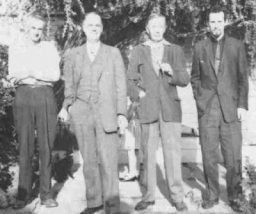 Weird (Grognardia): The photo above was taken on the occasion of a visit by several of his admirers. . Next to Haas is, of course, CAS, with his signature blazer and cigarette holder. At the far right is Howard Stanton Levey, who was, among other things, a regular hanger-on in the science fiction and fantasy fan community of San Francisco. A few years later, Levey had renamed himself Anton LaVey and began to peddle Ayn Rand in devil horns as Satanism. 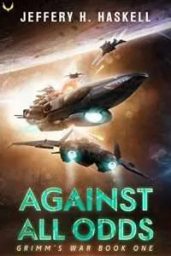 is a military science fiction novel that starts with a bang: a sneak attack by enemy forces results in a young officer using some daring tactics that proceeds to annihilate the attackers. Jacob Grimm, the officer, thinks he’s a hero but soon finds events turning into a nightmare as it is revealed the attackers included a cargo of young children. That’s the kind of opening that gets my attention when reading. 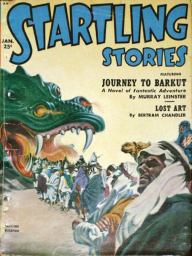 Pulp (Socialist Jazz): I was reading–literally only a few pages a night–an issue of Startling Stories, January 1952. I finally finished it last night. Let me see if I can cast my memory back over the weeks and see what I thought of these stories in a few words.

Science Fiction (Tellers of Weird Tales): Mack Reynolds (1917-1983) was a very prolific author of science fiction novels and short stories published between 1950 and 1983. He was something of a red-diaper baby and though he went by a kind of tough-guy moniker and lived an active life, he was a socialist. (1) That may have changed in 1958 when he resigned from the Socialist Labor Party in America. I know very little about that whole matter, but his transgression seems to have been, essentially, success.

RPG (MSN): There are plenty of genres in the TTRPG sphere. No matter

what tickles your fancy, you can find it somewhere in a hobby shop near you. But what about those games that send a chill down your spine? Not just any chill, though, the one that comes from encountering a monster that is beyond description. Yes, the scares come from none other than cosmic horror. Well, there are plenty of options for you in this niche genre. Games that will test your sanity, destroy minds and bodies, and pit you against elder gods that want nothing more than the destruction of the universe. 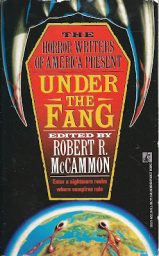 Horror (Porpor Books): ‘Under the Fang’ (336 pp.) was published by Pocket Books in August of 1991. The cover illustration is by Mitzura. There were quite a lot of horror anthologies issued during the ‘Paperbacks from Hell’ boom years of the 1980s and early 1990s. I remember picking this book up soon after its publication, and deciding it was pretty good. When re-read after the passage of nearly 31 years, it still holds up well. 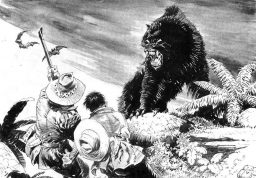 like the perfect way to follow our Conan Black & White series. Why? Because a good werewolf tale has as much action and atmosphere as a good Sword & Sorcery tale. (When I get both, like in Keith Taylor’s “Buried Silver” (Fantastic, February 1977) or Karl Edward Wagner’s “Reflections for the Winter of My Soul” (Death Angel’s Shadow, 1973), my toes absolutely curl!

T.V. (Grognardia): I offer no apologies, since I’ve been intending to write (again) about the 1974–1975 television series, Kolchak: The Night Stalker and this space seemed as good a place to do so as any. The show was, along with Star Trek, a favorite of mine as a child – influenced, in both cases, by my paternal aunt, who had a love for things scary and science fictional, hence her also taking me to see Star Wars in June 1977. 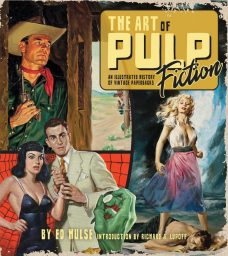 titled The Art of the Pulps: An Illustrated History, published in 2017. Edited by Doug Ellis, Ed Hulse, and the late Robert Weinberg, all of whom are long-time fans and collectors of pulp artwork. There are other anthologies out there, but this one is probably the best of them. A sort-of follow-up recently came from IDW, this time edited only by Ed Hulse: The Art of Pulp Fiction: An Illustrated History of Vintage Paperbacks. And sadly, if you pay attention to the title, it’s really not about pulp fiction, but on paperbacks — which are not pulp.

Hammett (Up & Down These Mean Streets): Our pal Mike Humbert sent a couple of images winging around the net, with the info line: “Two pics from me taking the Dashiell Hammett tour for the first time, October 27, 2002.”