H. P. Lovecraft (DMR Books): The first thing to keep in mind is that this cache represents one of the great epistolary friendships in the history of letters. The two never met in person, but the Mutual Admiration Society CAS and HPL formed between them was forged of eldritch steel. Both considered the other the Greatest Living Weird Fiction Author. It is obvious in every letter they wrote and confirmed by comments they sent to other correspondents.

Comic Books (Bleeding Fool): Two weeks ago, we published the second part in our ongoing series of articles investigating the secret “Whisper Network” – a secret group of (mostly) women that’s been allegedly colluding to torment comic book pros and publicly harass creators they disagree with. Within that exposé, a major story was uncovered that should have rocked the comic book industry when it first happened, but was buried or “memory holed” by comic industry press at the time, with sites like Bleeding Fool erasing it after publishing it and Comics Beat, IGN, Newsarama and all others ignoring it entirely.

declared that his film production company Bad Robot will make hiring based on looks a top priority. Speaking with Time Magazine about the film industry Abrams discussed what he wants the industry to look like in the future. He then made it clear that Bad Robot will be focused on people’s outward appearance when it comes to hiring.

1920, in Waukegan, Illinois. From an early age, he was a voracious reader and consumer of popular culture — movies, pulp magazines, radio programming, newspaper comic strips, circuses, magic, and more. He was enamored with the Buck Rogers newspaper strip, the stories of L. Frank Baum, Edgar Rice Burroughs, and more. By age twelve, he wanted to write.

James Bond (25 Years Later): Raise your martini glasses! We are only a few

months away from (hopefully) another fantastic James Bond adventure (er, at least, we think so. It’s already been delayed once by a global pandemic that is starting to feel like something a diabolical Bond villain would think up). No Time To Die, the 25th official James Bond release, directed by Cary Joji Fukunaga (Beasts of No Nation), stars Daniel Craig for the fifth, and likely final, time as superspy James Bond ending what has been a sterling era for the rugged 52-year-old.

Fiction (Benespen): This is another expedition into the past of popular 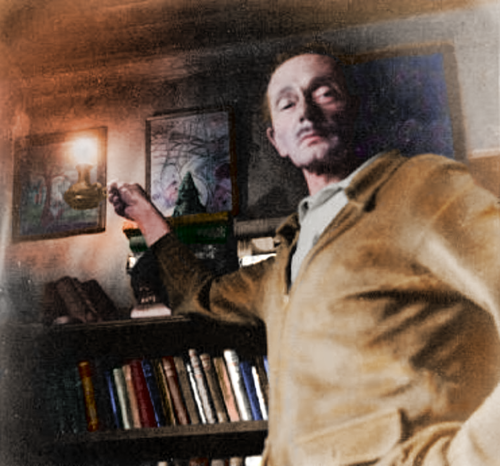 literature. Abraham Merritt, whose byline is nearly always A. Merritt, was a popular author who wasn’t even best known in his own time for his fiction. Rather, he was a celebrity journalist, making enough money to travel widely and pursue arcane hobbies.  The Moon Pool [Amazon link] is the work I usually see cited as typical of Merritt’s work, and it is listed in Gary Gygax’s “Appendix N” as an influence on Dungeons and Dragons. Let’s dive into the Moon Pool and see what happens!

Science Fiction (Starship Cat): This novel is pretty much a direct follow-in

to Citadel, and continues to be mostly Dana’s story, with occasional appearances by Butch and some cameos by Vernon Tyler. Dana’s story is pretty much an enactment of the proverbial Chinese curse “May you come to the attention of those in high places.” Her heroism at the end of the last book has made the Powers That Be decide that she’s leadership material — and send her to the new station, to command a squadron from the various Latin American countries.

H. P. Lovecraft (Tentaculii): I’ve encountered an interesting item which perhaps throws a small sidelight on the use of the telephone in Lovecraft’s “The Statement of Randolph Carter” (1919). You’ll recall that a telephone is taken on the descent… The telephone might sound like an unlikely thing to take down below. But wired long-distance field telephones were a known ‘thing’ at that time, not least because of their use in the war.

Cinema (0themastercylinder): William Smith. He was born in 1933 in rural

Columbia, Missouri on a cattle ranch. That background served him very well during the many Westerns he was to appear in later. The first big surprise I got in examining his background was how early his film career started. He appeared as a child actor in 1942’s “The Ghost of Frankenstein” as the boy who befriends the Monster portrayed by Lon Chaney Jr.

D&D (Paint Monk): wo years ago, I picked up Goodman Games’ Original

Adventures Reincarnated #1, where I re-lived the fun of TSR’s original D&D modules “In Search of the Unknown” and “The Keep on the Borderlands”. This month, I finally picked up OAR #2 – The Isle of Dread, and I’d like to share just how much I enjoyed this book and the work the fine folks over at Goodman put into making it a success.

Fiction (Dark Herald): Been a while since we’ve seen a new Dresden Files

book and we will be getting two this year. So at least 2020 isn’t a total write off. Butcher’s last addition to this series was in 2014. He had been rather productive up until this time. Usually producing one or two books a year. I’m not sure why there was a prolonged interrupt, possibly it was his divorce.

Beer (Trinkelbonker): Got these as a delayed birthday gift the other day, six

cans of Ace Of Aces American Lager with a rather nice (and collectable, if you ask me) motif. The aircraft you see is an American Lockheed P-38 Lightning and the pilot that flew it was Richard Ira Bong, the first child of nine of Carl Bång, an immigrant from Sweden and Dora Bryce, who was an American by Scots-English descent. Richard, nicknamed Dick by his friends, shot down over 40 Japanese aircraft in the Pacific Theater during WWII and became one of the most decorated pilots of the war.

Game Review (Black Gate): This is the second article in my “explanation” of

Conan 2d20. Last time I focused on 2d20’s core mechanic and on this game’s design philosophy insofar as it is an emulation of the “physics” and flavor of Robert E. Howard’s Conan fiction. This one will detail more aspects of gameplay, particularly player character components and action scenes. Last article, I maintained that Conan 2d20 characters begin as powerful in mechanical ability (unless the alternative Shadows of the Past character generation is used).

Cinema (Irish Times): because these things only happen in the greatest

superhero movie ever made: Flash Gordon. The 1980 camp classic, which has been restored in 4K to mark its 40th anniversary, has a history of happy accidents following its hero’s first appearance in a comic strip in 1934. Buck Rogers, another intergalactic hero, had already spawned novelisations and toys when King Features Syndicate – a subsidiary of the Hearst newspaper empire – approached Edgar Rice Burroughs with a plan to adapt John Carter into a comic strip.

Small Press (Tentaculii): New on Archive.org…Howard Collector #5, Summer 1964.  Howard Collector #6, Spring 1965. With the poem “Who is Grandpa Theobold?”, from a letter. This would count as another early use of ‘Lovecraft as character’, albeit not in fiction. I wonder what the likely year on this poem is?

Cinema & T.V. (Dark Worlds Quarterly): Heroic fantasy films and television changed after 1982. The release of Dino DeLaurentis’ Conan the Barbarian sent Fantasy films in a new direction. Movies had to have a mix of violence, sex and flash that previous movies seemed to lack. Whether you like or hate these films is a matter of opinion. There were bright spots of Fantasy filmmaking among the direct-to-video duds like the Brian Froud-Jim Henson films, Legend by Ridley Scott, and Ron Howard’s The Lord of the Rings known as Willow.

veteran’s take on supernatural horror. Sometimes we casually refer to the men who come back from war suffering from PTSD and survivor’s guilt as demon-haunted; but for Michael Alexander it is anything but a metaphor. We now come to the third book covering similar territory I have read recently. I don’t often end up reading lots of similar books together in succession, so I can compare and contrast these. 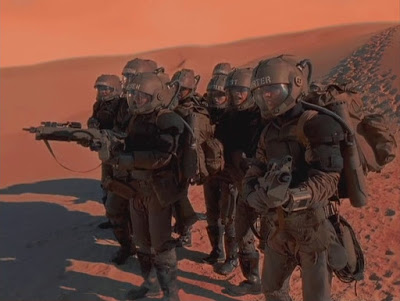 science fiction work are futuristic firearms and some, like the Colonial Marines M41A1 Pulse Rifle has become an icon of sci-fi weaponry…then there are others that never get their day in the limelight. One of those military sci-fi weapons is the United States standard issue endo/exo assault rifle of the 2060’s: the M590. Featured in the legendary 1990’s FOX one-season TV show Space: Above and Beyond.

notch science fiction for about forty years now, and that’s almost how long I’ve known him. His latest novel, THE DUST OF STARS, is the first book in a new series called ENGINEERING INFINITY, and it’s everything I love about science fiction. First, it has big ideas. And I mean E.E. “Doc” Smith big: An ancient, long-disappeared alien race scattered planet-sized machines throughout the galaxy.

Pulp Fiction (DMR Books): Merritt outlived the CAS-HPL correspondence of 1922-1937, though not by much. In the CAS-HPL letters, one sees Klarkash-

Ton belatedly discovering Merritt–and HPL belatedly discovering The Metal Monster. Throughout the course of the correspondence, Merritt was the most successful exemplar of the weird fiction that CAS and HPL were themselves creating. While they did not always agree with the directions he took in his fiction, there was no denying that Merritt dominated the market for pulp fantasy.

Tolkien (Sacnoth’s Scriptorium): So, for years I’ve been convinced that the old story about the Tolkien Estate having gone after TSR for their use of hobbits, ents, balrogs et al in early printings of D&D was wrong and that it was actually Saul Zaentz’s group, Tolkien Enterprises (the movie merchandising people) who’d issued that cease-and-desist back in 1976. But while I’ve able to build up a probable case I’ve been lacking direct proof. Now Gygax has provided it.