Writing (Wasteland & Sky): The strangest aspect of entertainment today is how absolutely slow it has gotten. This isn’t a new problem, but an old error that always returns during times of decadence and bloated egos seizing control of the arts. On Cannon Cruisers we constantly use the term “1970s pacing” to refer to movies with needless padding that take far too long for the ball to get rolling, and there is a reason for that.

Anime (Pulprev): he sub-genre of the harem anime is well-known to anime 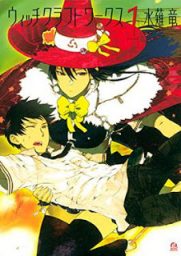 fans. Most people recognize it for what it is: a wish-fulfillment fantasy for males. But what is less obvious, and much more interesting, is what these and other anime say about the creators’ attitudes towards male social hierarchies. In a primitive society, the duty of childrearing is the domain of the womenfolk. 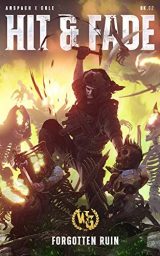 Review (Benespen): Yes, Forgotten Ruin book 1 has only been out for two days, but thanks to my internet friends at the Blasters and Blades podcast, I know that more books set in the Ruin are coming in hot! Nick Cole was a guest on last night’s episode of Blasters and Blades, and he said that the Rangers are going to f**k things up all over the world they find themselves in.

D&D (Brain Leakage): The basic problem with assigning the Cleric a fantasy archetype like the other three is in looking to the same sources for its inspiration. But the Cleric doesn’t have pulp fantasy roots. I’d argue his archetype is actually something much older and more primal than that.

Art (Heavy Metal): f you wound up reading Heavy Metal, with its tales of 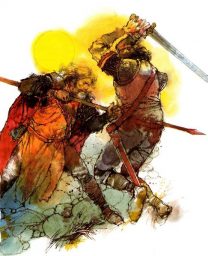 adventure illustrated by international comics legends, it’s likely you encountered Victor Ambrus in your elementary or junior-high years. Ambrus was a gifted artist with an unmistakable style who created timeless images from myth and legend for fertile young minds. Tales of King Arthur (by James Riordan), Robin Hood: His Life And Legend (by Bernard Miles), and Favorite Tales from Shakespeare (also Miles) were staples of school libraries. And there were others — the Hungarian-born Ambrus illustrated well over 200 books in his career. 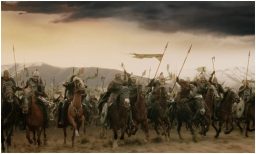 Tolkien (Sagas From the Sea): The veneration Tolkien displays for these ideas show a key facet of his fiction. The Anglo-Saxon poetry age is characterized by what is called the ‘heroic-elegiac’ mood, which is a sense of all things coming to an end, failing and finishing, what might be called The Spirit of Ragnarok. Tolkien, inspired by his Christian faith and his love for the Northern World, wished to restore this heritage to a brighter future, where the values of honour, self-sacrifice, duty, courage and loyalty, were rewarded with victory, instead of the melancholic sense of fighting the inevitable.

Though his rendering of form is very much in the vein of naturalism, his color palette borders on psychedelia. These colors layered on top of the wild subject matter give his work the feeling of a genre fever dream.”

RPG (Tabletop Almanack): Kull of Atlantis presents the world of the Thurian Age for roleplaying in Conan: Adventures in an Age Undreamed Of. While I find the Hyborian Age a very gameable setting, I find the Thurian Age fascinating in its difference. The book covers this well, helping present the unique nature of this world and how it differs from the main game. The Hyborian Age is one of brutality and viciousness, grounded in the physical world. There is magic and supernatural elements but they’re presented as holdovers and mysteries of a more ancient time – which is Thuria.

Reprints (Jon Mollison): Julian Hawthorne’s The Cosmic Courtship might have been lost, buried as so much of the great pulp structures were, beneath the tangles and vines of a literary culture that turned away from heroism and making the universe a better place.  Hacking away the overgrowth with the machete of his keen editorial eye, Alexander found a unique opportunity to share something lost and wonderful with the rest of the world.  Tell me this space-sorcery doesn’t sound fun and rewarding and I’ll tell you that you are at the wrong blog. 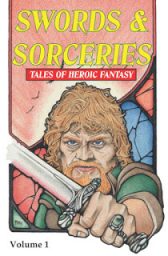 Parallel Universe Publications) was for most of its 219 pages an enjoyable read. I can recommend this one. I tend to react to a lot of new sword-and-sorcery with indifference, but I don’t think S&S fares any worse than other subgenres or most writing in general (the same can be said of my blog, where a handful of posts I’ve written seem to get regular traffic, but most collect dust). This book had as many hits as misses, which beats par for the course for many anthologies. Four standouts for me.

Birthday (Geeky Cool): Happy 90th Birthday to our Captain Kirk, Denny Crane, and T.J. Hooker.  William Shatner was born on March 22, 1931 in Montreal, Quebec, Canada.  He has been several of our favorite characters over the decades of his acting.

Fiction (Frank Ormond): This is another story picked by Leigh Brackett as one of the best in Planet Stories. “Duel on Syrtis” by Poul Anderson was published in 1951 and helped establish Anderson as a force in sci-fi and fantasy.

rediscovering the works of Harold Lamb. He wrote timeless adventure stories that influenced a bevy of Appendix N authors, most notably Robert Howard. The strength of Lamb’s tales are tight plotting, crisply drawn characters and rich historical detail. But as enjoyable as Lamb’s tales are, they lack some of the cardinal elements of Appendix N literature and DCC RPG adventures: supernatural magic, brooding extra-human entities from beyond space, and the never-ending struggle between Law and Chaos. 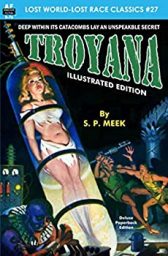 Fiction (Fantasy Literature): Troyana, as had its predecessor, initially appeared as a three-part serial in the pages of Hugo Gernsback’s Amazing Stories magazine (the very first magazine to dedicate itself solely to science fiction); in this case, the February – April 1932 issues. It would then go OOPs (out of prints) for almost 30 years, till 1961, when Avalon Books released it as a hardcover. 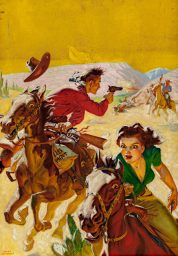 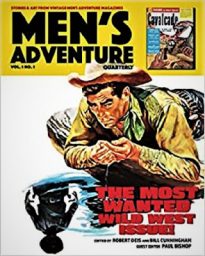 Review (Rough Edges): Nobody knows more about the Men’s Adventure Magazines, those lurid mixtures of fact and fiction that were common on newsstands and magazine racks in the Fifties, Sixties, and Seventies, than Bob Deis. He’s teamed up with Bill Cunningham (and an assist by Paul Bishop) to produce a terrific new anthology series called MEN’S ADVENTURE QUARTERLY, each issue of which will focus on a different genre from the Men’s Adventure Magazines.

New (Rough Edges): Wild Bill Hickok may be gone, but Abilene is still a wild 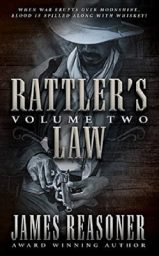 and woolly cowtown in need of a strong marshal to bring law and order to its streets. That man is Lucas Flint . . . a legendary lawman sometimes known as the Rattler because of his swift and deadly speed with a Colt .45. Together with his deputy, dashing young gunfighter Cully Markham, Lucas Flint will take on any challenge that threatens the safety of the town and its people that he’s sworn to protect.

Heinlein (Isegoria): “I object to conscription the way a lobster objects to boiling water: it may be his finest hour but it’s not his choice. Nevertheless I love my country. Yes, I do, despite propaganda all through school about how patriotism is obsolete. One of my great-grandfathers died at Gettysburg and my father made that long walk back from Inchon Reservoir, so I didn’t buy this new idea. I argued against it in class—until it got me a ‘D’ in Social Studies, then I shut up and passed the course.”

Fiction (American Thinker): March 22 is the birthday of the iconic writer 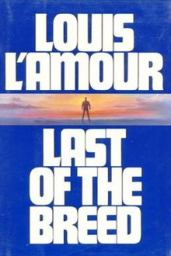 Louis L’Amour, a man whose name became synonymous with the American frontier and whose novels promoted old-fashioned patriotism and morality. America sorely misses his kind. L’Amour was born in Jamestown, North Dakota, a farm town, in 1908. He was largely self-educated. As a youth, L’Amour spent many hours at the town library studying history and science and imbibing the fiction of Robert Louis Stevenson, Jack London, and Edgar Rice Burroughs. 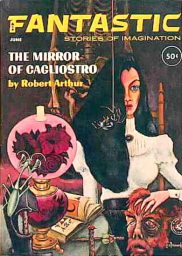 Editing (Socialist Jazz): Fantasy and sf in the fiction magazines devoted to them trended ever more sophisticated from their introduction in the US and UK in the 1920s and ’30s, and in other English-language countries (though most other Anglophone countries usually featured simply local editions of the US or UK magazines), till by the 1950s the good ones averaged on par with the run of more sophisticated  commercial and little magazines.

Games (Geek Dad): The Shore is a beautiful game. The locations and detail of the imagery are phenomenal. For cosmic horror, it is tone-perfect for this generation of graphics. The gameplay is very reminiscent of Layers of Fear and other horror games that some call “walking simulators.” You may do a lot of walking, but I can assure you that it is done in an interesting fashion and helps to build the horror throughout the game. The visuals, sound, and tone make for a great horror atmosphere that I want to spend more time in.

Fiction (Cthulery): It’s 1938, and Andrew Phelan of Boston has up and 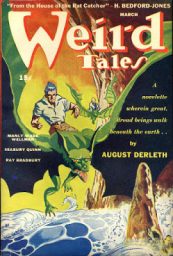 disappeared – “made away with himself, sez the Boston Herald. It seems a while back Andrew responded to a want ad, offering employment to a young feller with brains, brawn, and a “limited imagination”.  Not the most enticing job listing but maybe Andy was hard up.

Pulp (Tentaculii): A peek at the environment in which the Weird Tales offices existed, when at the Dunham Building, Chicago, during the prime ‘Lovecraft years’. Entrance in 1926, from Archive.org. Other pictures via Chicago History Museum Images, from which large b&w prints can be had.

Fiction (Mises.org): I was pleased recently to read an article by Ira Katz extolling the virtues of Sir Harry Flashman, V.C. The Flashman Papers, a series of books written by the late George MacDonald Fraser, are a personal favorite. Unfortunately, one seldom sees any reference to this enormously underrated set of historical novels.