RPG (Modiphius Entertainment): Before Conan, there was Kull! DANGER 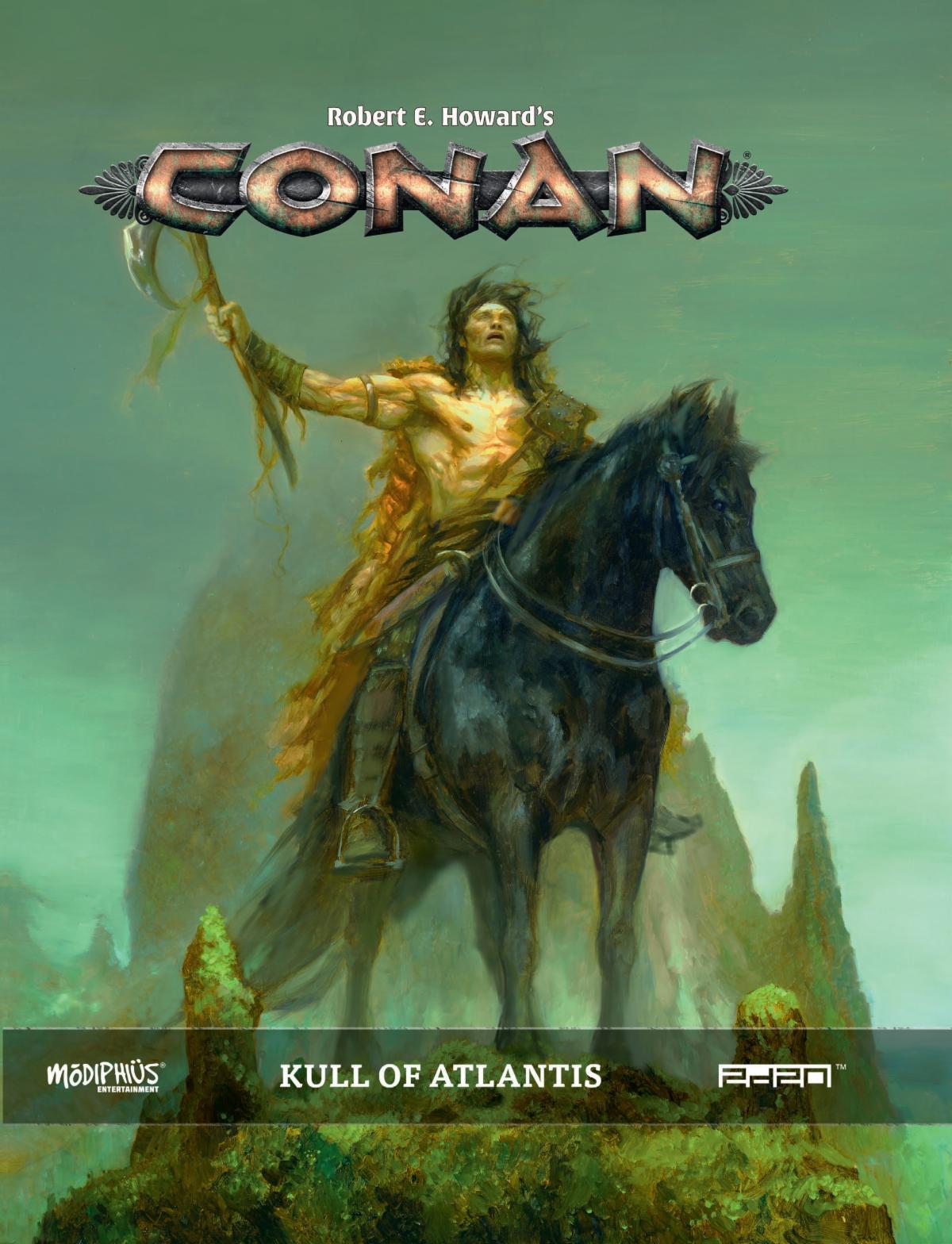 BREEDS CAUTION, AND ONLY A WARY MAN LIVES LONG IN THAT WILD COUNTRY WHERE THE HOT VENDHYAN PLAINS MEET THE CRAGS OF THE HIMELIANS AN HOUR’S RIDE WESTWARD OR NORTHWARD AND ONE CROSSED THE BORDER AND WAS AMONG THE HILLS WHERE MEN LIVED BY THE LAW OF THE KNIFE. Here, for the first time in roleplaying gaming, Kull and his world are described in all their savage, dreamlike glory.

Writing (Larry Correia): Of course the article is trash. It comes from Buzzfeed. They get everything wrong. But worse, some of the quotes in there from certain writers are agenda driven garbage, which give aspiring writers a completely ass backwards view of how publishing works. I want to see writers be successful. I’m rooting for you guys. This crap right here? It is defeatist garbage, and if you buy into this pity party, you are going to artificially limit your career.

literary criticism, and for that we owe him a debt. Today on what would have been his 90th birthday I celebrate his pioneering efforts as a historian and guide, thank him for treating fantastic material with respect and enthusiasm—and also offer some critique I think he might have welcomed.

Science Fiction (Black Gate): First, it’s Heinlein’s first novel in that it’s the first one he wrote, way back in 1938 and 1939, when he hadn’t yet broken

into print. But it didn’t sell, was never published at the time, and went unknown for decades. In fact the manuscript was thought lost; Heinlein and his wife had destroyed copies in their possession in the approach to Heinlein’s death. Yet another copy of the ms. was found years later, after Heinlein’s death in 1988, and, as Robert James explains in an afterword here, was published in 2004, with an introduction by Spider Robinson. (Spider Robinson would later publish Variable Star, based on a Heinlein outline, in 2006.

Edgar Rice Burroughs (Dark Worlds Quarterly): Edgar Rice Burroughs was a professional in the best sense of the word. This meant he worked hard at producing the best work he could. It also meant he knew you didn’t stop a successful franchise but always left a back door for more stories in the future. With Tarzan, Pellucidar and John Carter he used pretty much the same method (which I think was largely instinctual and certainly not planned).

REH and HPL (Westhunt): Just as Robert E. Howard’s take on prehistory was closer to the truth than the one promulgated by archaeologists  in the past few decades,  H.P. Lovecraft’s views on insanity were more realistic than the common ones in American popular culture – where people are thought to be driven insane by trauma, where your mum and dad fuck you up by their actions, rather than their genes. 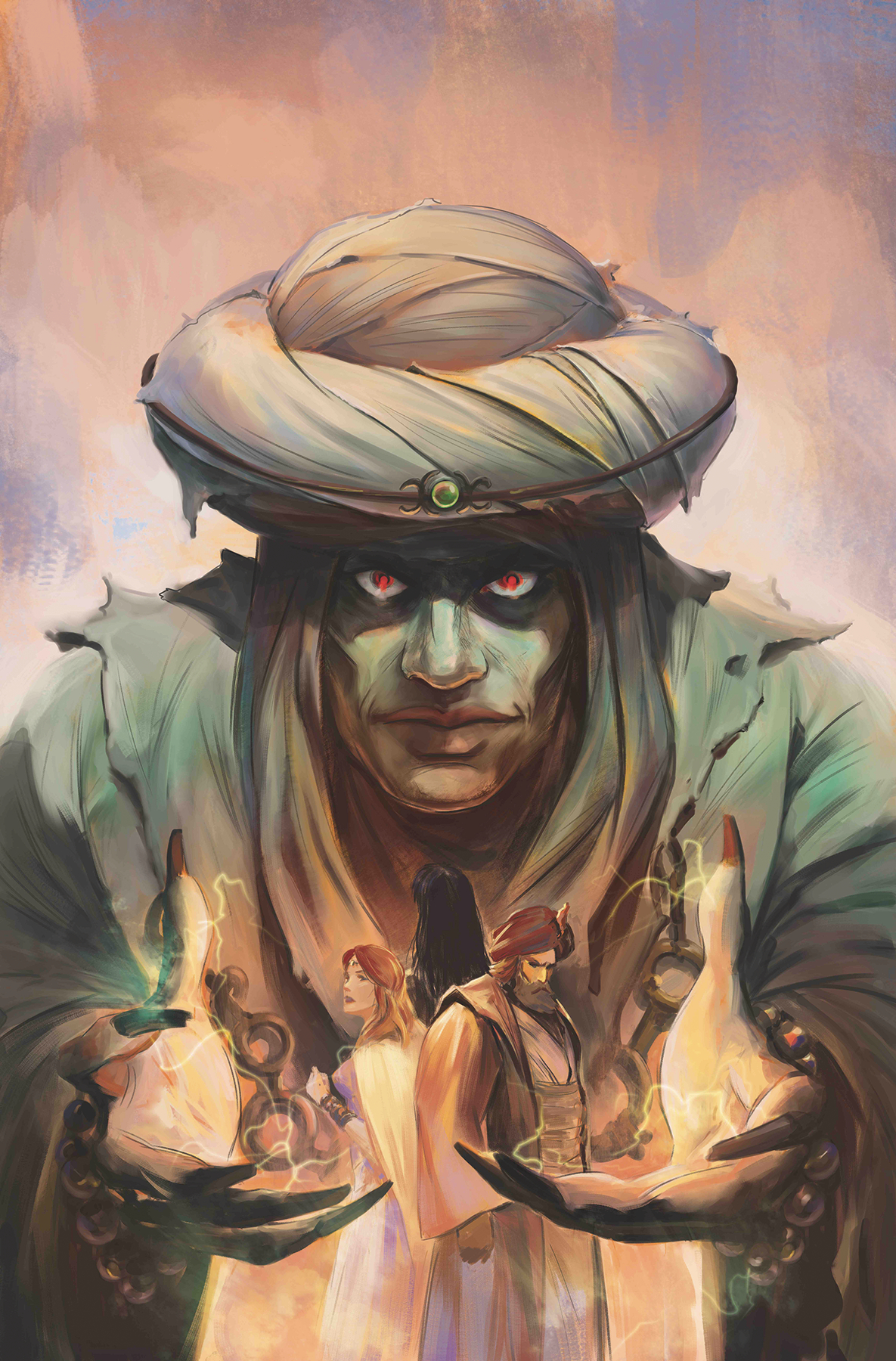 UNCENSORED! Discover the true Conan, unrestrained, violent, and sexual. Read the story as he intended!

In the kingdom of Vendhya, the king has just died, struck down by the spells of the black prophets of Yimsha.The king’s sister, Yasmina, decides to avenge him…and contacts Conan, then chief of the Afghuli tribe. But several of Conan’s warriors have just been killed by the men of the kingdom of Vendhya, further complicating the matter. The princess thought she could use the Cimmerian, but rather it is she who will serve his interests…

Fiction (Misha Burnett): I love it when a plan comes together! Yes, I do have a plan, although it may not be evident from my publishing schedule. Ever since I realized that short fiction is the ideal medium for me, I have been working towards building a body of work. As I’ve said several times in this blog, I am now writing stories with an eye not just to first publication, but to inclusion into a series of collections.

Fiction (Marzaat): My multi-part look at this John Buchan collection

concludes. Buchan took a cruise to the Aegean in 1910 and that’s the setting of “Basilissa”. This 1914 story is my least favorite in the collection. It mixes precognitive dreams with a standard damsel-in-distress romantic plot. Every April since boyhood Vernon has had a dream where he enters a house with many rooms and senses a danger. On each repetition of the dream, the danger draws closer.

RPG (Tenkars Tavern): Using my Soapbox to “Discourage” a Problem at Some Tables… So I’m not 100% when this post will be, well posted, but I’m running with the assumption that this will be my 1st weekly entry here at the Tavern. There’s so many things I could write about, but one thing popped into my head, something I feel strongly about and something that has a back story. There are probably three things I’m passionate about, well maybe five things, or 50……..I really don’t keep track, but clearly I’m a passionate, passionate man…..

tell you more about it later) which reminded me of one of my favorite passages from Snorri Sturlusson’s Heimskringla. This story involves King Eystein I, far from the most renowned of Norway’s kings, but very possibly the most likeable. He was part of a set, sharing a joint monarchy with his brother, Sigurd Magnusson. They were both the sons of King Magnus Bareleg, who never got the memo that the Viking Age was over, and died young and outnumbered in Ireland, declaring, “Kings were made for glory, not for long life.”

Pulp Magazines (Pulp Net): Adventure magazine was one of the “Big Four”

of pulp magazines. For those not aware, the other three are Argosy, Blue Book, and Short Stories. Adventure existed from 1910 to 1971, though not always as a pulp fiction magazine. Ridgeway, which had been bought by Butterick Publishing, who published sewing patterns and related magazines, published Adventure, along with Everybody’s and Romance, until selling these to Popular Publications in 1934. I suspect Butterick basically sold Ridgeway to Popular, similar to Popular buying out Munsey in 1941.

Art (DMR Books): The great Al Williamson died on this date in 2010. Not to 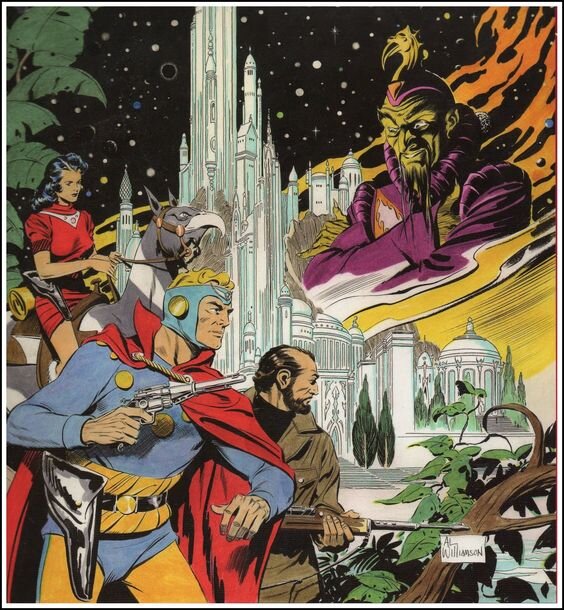 be confused with the equally cool Jack Williamson—wouldn’t it have been awesome if Al had adapted Jack’s “Legion of Space” tales to comics?—Al was the “kid brother” and child prodigy at the Cartoonists and Illustrators School which was run by the legendary Burne Hogarth. Al would fill the same role at EC Comics, where he worked with the likes of Frank Frazetta, Roy Krenkel and Wally Wood. Here’s an excellent bio from the Inkwell Awards website:

Science Fiction (Science fiction fantasy blog): The Northworld Trilogy, by David Drake.  This trilogy was first published as three individual novels: Northworld (published 1990), Northworld Vengeance (1991) and Northworld Justice (1992), although I have all three in one paperback omnibus, published by Baen in 1999. The first novel (but not the others) has the distinction of its own Wikipedia page, so if you want a thorough plot summary – complete with spoilers – you can look it up. The principal character of the story is Nils Hansen, a classic SF hero; an intelligent and highly capable leader of a special police unit on the planet Annunciation, and exceptionally skilled in close combat.

Sundown for the past few nights for players who are relatively new to RPGs and it has worked a treat. Everywhen’s simple mechanics with little bookkeeping or arithmetic make it ideal for new or casual players, and the range of pregenerated characters included mean you can be up and running almost straight away. The sample adventure could probably be played in an evening if players most fast, but it’ll have taken us three sessions of 2(ish) hours.

the near future – near enough for there to be no such thing as microwave ovens but future enough for personal hovercraft to be no big deal – Dr. Benton Quest (one of the world’s “top scientists”) roams the globe, troubleshooting various problems for the U.S. and other friendly governments. (We’re never told what Dr. Quest is a doctor of, and it’s impossible to pin down his specialty. Is it nuclear physics? Chemistry? Geology? Botany? Oceanography? Molecular biology? Who knows? He shows a deep knowledge of all of these fields and more, like that guy they had to retire from Jeopardy.)

The Year’s Best Horror Stories Series VIII, Edited by Karl Edward Wagner (1980, DAW) Volume VIII was the first edited by Karl Edward Wagner. In 1980 the boom was underway.  When I first landed a copy of this paperback, I read the stories by Dennis Etchison, Ramsey Campbell, Harlan Ellison, Alan Ryan, and Charles L. Grant, but I left money on the table when I got distracted and picked up another book instead.

Publishing (Kairos): Imagine that you’re an artist of some sort desiring to make a living through your art. In the case of novelists, this used to mean seeking approval from an agent and then an editor before landing a book deal with one of the big New York publishers. That publishing model is on the way out, thanks to decades of literary malpractice on the big publishers’ part brought to a head by the Kindle revolution and finished off by Corona-chan. We can expect another round of mergers and mid list contract cancellations. When the dust settles, old pub will be reduced to pimping a handful of name authors at Costco.