Fiction (Bleeding Fool): ‘Red Nails’ is a novella first serialized in 1936 in the July through October issues of Weird Tales, and the last of the tales of Conan

the Barbarian penned by Robert E Howard, as well as one of the best.

Some of the appeal of this yarn may be lost on any modern reader who has encountered Howard’s many imitators, because this story contains all the elements of the quintessential Conan adventure: from a feisty yet desirable swordswoman, to prehistoric monsters raised by eldritch powers, to lost races (at least two) swimming in their own sadistic corruption and occultism, adepts of black magic (at least three), murder, torture, betrayal, death, and at least one mystic wand issuing a death-ray.

Writing (Emperor Ponders): My recent (a few hours ago, in fact) entry into an online group where the business side of writing is discussed has put me into an accounting mood. So I have been playing and running some numbers to come up with my (or yours) expected return as a short story writer. That’s the key concept here since novelists or self-published authors will have to come up with their own numeromantic equations to see how much they need to sell to not be ashamed of saying that they are writers.

Fiction (Paperback Warrior): Fredric Brown was an interesting figure in the world of pulp fiction because he had equivalent success in both the mystery

science fiction genres. As a teenager, I was a huge fan of his SF work. As I grew into classic crime fiction, I was pleased to rediscover one of my favorite authors as a hardboiled noir master.

“The Wench is Dead” began its life as a short story and was later expanded into a full novel for a 1955 Bantam Books paperback release.

adventure was his specialty. Until recently, I was unaware he had written a “lost world” novel in the style of Haggard. Phalanxes of Atlans originally appeared in the February and March issues of Astounding Stories in 1931, and was recently reprinted by Armchair Fiction in their “Lost World-Lost Race Classics” series.

Fiction (Black Gate): “You’re the second guy I’ve met within hours who seems to think a gat in the hand means a world by the tail.” – Phillip Marlowe in

Raymond Chandler’s The Big Sleep (Gat — Prohibition Era term for a gun. Shortened version of Gatling Gun). Hopefully, by now, you know that I’ve done a slew of Facebook posts under the label, Back Deck Pulp, kind of cross-promoting this column. Especially since! Below are some more of my Back Deck Pulp posts, collected by subject matter. I tried to share some interesting info. You be the judge!

Fiction (Dispatches from the Last Outlaw): Edgar Rice Burroughs only wrote a few historical novels, and The War Chief is my personal favorite.  This is

the tale of Shoz-Dijiji, a white boy raised by the Apaches. Andy McDuff, the infant of Jerry and Annie McDuff, Scotch immigrants, is spared when his parents are slaughtered by the Apaches. A favorite of Cochise, Shoz-Dijiji learns the ways of the Apache, although some Apaches know that he is white and despise him for it. Shoz-Dijiji believes himself to be a full-blooded Apache, which sets up part of the plot. He soon distinguishes himself on the battlefield, as great a warrior as Geronimo.

Cinema (Black Gate): This is a bit more of coloring-out-the-lines for my sword-and-sandal reviews, since The Adventures of Hercules comes from the 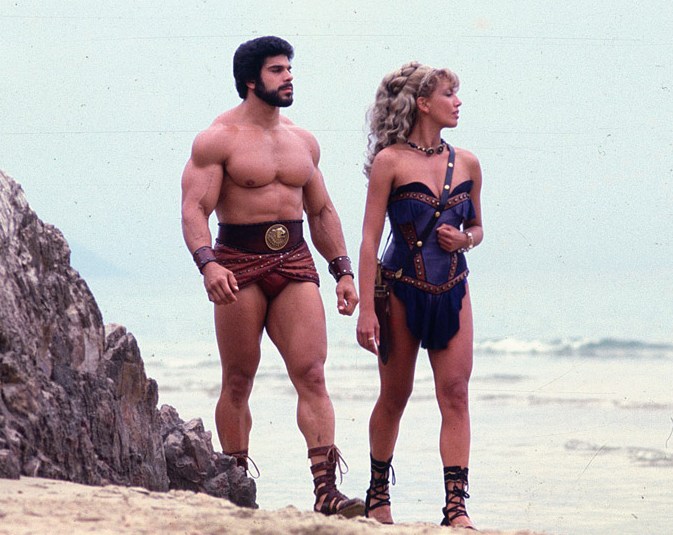 mid-‘80s, far beyond the classic era of the Italian peplum of 1957–1965. But it is an Italian genre film about Hercules starring a bodybuilder from the US, which is the most sword-and-sandal situation imaginable. Plus, I’ve owed Black Gate a look at this film ever since 2009 when I reviewed the first of this pair of unbelievably goofy Lou Ferrigno Hercules flicks from director Luigi Cozzi. The guy who made that psychedelic version of the original Godzilla — which explains a lot about these Hercules movies.

Fiction (Mporcius Fiction Blog): As you know, I have been looking at a lot of early 1970s issues of Amazing.  In the September 1971 issue we find an ad

for other magazines from Amazing‘s publisher, Ultimate Publishing Co.  Among this stable of weird and wonderful publications is something called Weird Mystery; a look at isfdb indicates that this was a reprint magazine which lasted only four issues, two published in ’70 and two in ’71.  Psycho scribe Robert Bloch’s work is advertised on the cover of three of the four issues, and I decided to read these old Bloch pieces, 1950s stories which editor Sol Cohen thought fit to republish at the dawn of the “Me Decade.”

Fiction (Strange at Ecbatan): For Leigh Brackett’s birthday I decided to do one of my short story review compilations, but in her case I had to go back to 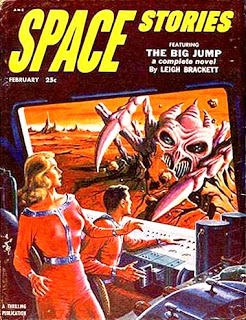 my “Retro-Reviews” of old SF magazines. So these are the stories of hers I have reviewed in the original issues of the magazines they appeared in. These include one of her novels, The Big Jump, which first appeared in a single issue of the pulp Space Stories.

The Drawing of the Dark

Hunting (Men of the West): The following is extracted from Hunting the Grizzly and Other Sketches, by Theodore Roosevelt (published 1889)

The wolf is the arch type of ravin, the beast of waste and desolation. It is still found scattered thinly throughout all the wilder portions of the United States, but has everywhere retreated from the advance of civilization.

Wolves show an infinite variety in color, size, physical formation, and temper. Almost all the varieties intergrade with one another, however, so that it is very difficult to draw a hard and fast line between any two of them. Nevertheless, west of the Mississippi there are found two distinct types. One is the wolf proper, or big wolf, specifically akin to the wolves of the eastern States. The other is the little coyote, or prairie wolf. The coyote and the big wolf are found together in almost all the wilder districts from the Rio Grande to the valleys of the upper Missouri and the upper Columbia.

RPG (RPG Pundit): After Aleister Crowley, probably the most significant shift in 20th century western magick was the development of what can be called “chaos magick”, starting in the late 70s. I’ve talked a little about this before; they were/are kind of magickal-hipsters who try to incorporate post-modern ideas into magick, show general disdain for scripted ritual, and like to mix “science” with their magick (or more aptly, butcher popular scientific or mathematical theories about everything from quantum mechanics to game theory to try to fit in with or justify their magical world view).

Gaming (The Last Redoubt): There are a number of different space warfare games. Some are purely strategic, like the Traveller-based Fifth Frontier War, 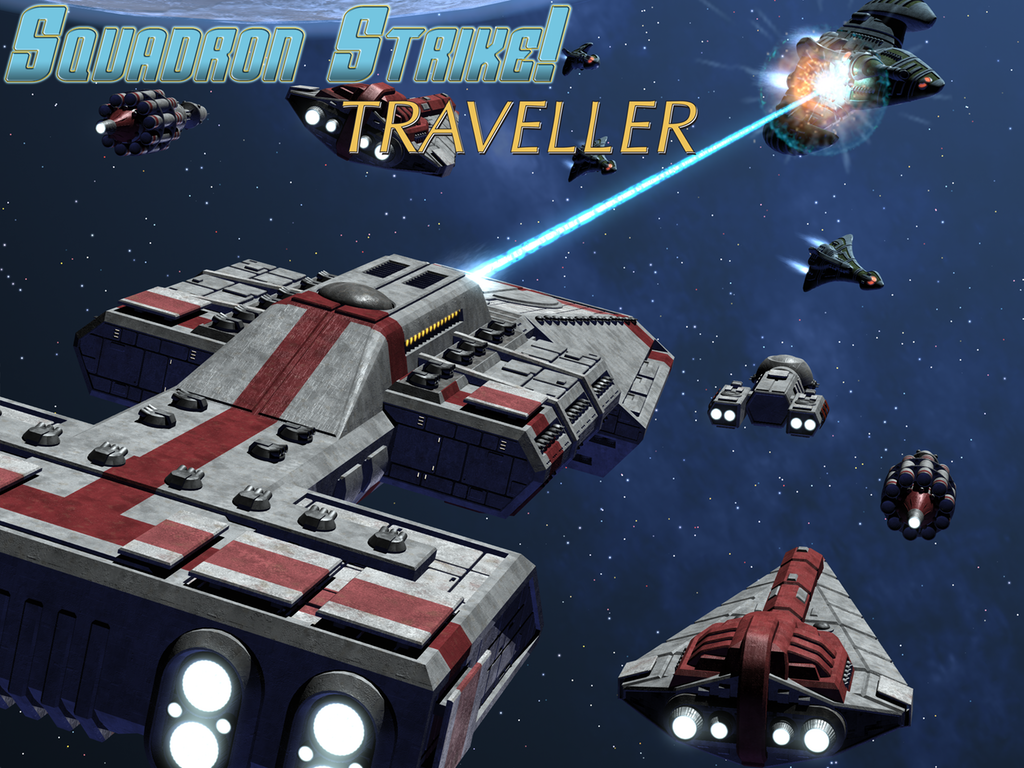 or a mix, like the Starfire system used to inspire several of David Weber’s non-Honor Harrington books. Others are very tactical. Take Star Fleet Battles, or Talon.

Not many were realistic. Sure, SFB could get as insanely detailed as a game of Harpoon, but it was still warp drives and swooping spaceships. Very little captured the freedom of motion of fighters in Babylon 5, though several games like Mayday, (also Traveller-based) and Triplanetary(I reviewed it and covered navigation) tried to at least incorporate vector movement