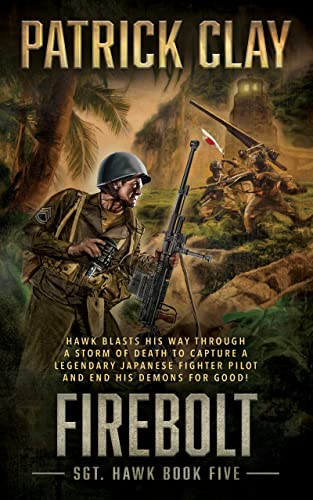 Firebolt is the fifth and last in the Sgt. Hawk series by Patrick Clay. This book was written in the early 1980s but never published due to the collapse of Belmont-Tower Books. There was confusion as to whether the book was published at the time or not. There was an ISBN for it but no one ever saw a copy.

Luckily, Rough Edges Press has published Firebolt for the first time. The Marines have landed on the island of Cokoni. Cokoni is actually a Japanese prefecture being a possession before WW2. Hawk’s unit is given the job of hunting down and capturing Isamu Zanji, the Japanese fighter plane ace with the most kills. He has crashed on Cokoni. Capturing him would be a public relations coup.

First, the Japanese Army counterattacks the Marines. Hawk’s unit has to hole up in a Japanese bunker they recently cleared out. Since the Japanese have moved on, Hawk’s platoon moves inland to find Zanji. They encounter a Buddhist monastery and the monks. This part of the book is almost like Kwai Chang Caine’s flashbacks of his time at the Shao lin monastery. I was waiting for Master Po to ask Sgt. Hawk to snatch the pebble from his hand.

Sgt. Tanaguchi from Tiger Island returns. He is dropped by parachute along with a unit of Japanese paratroopers to bring Zanji safely to a rendezvous site for extraction by sea plane. Some other elements from Tiger Island are also wrapped up in Firebolt.

Credit to Patrick Clay for arming Sgt. Tanaguchi with an MP-34 Solothurn submachine gun. I knew Japanese paratroopers had some Swiss made submachine guns in WW2. I did a little searching and found they were chambered for the Mauser pistol 7.63 cartridge. I would not want to be on the receiving end of that! The only thing missing from the Sgt. Hawk books were Johnson rifles and Johnson machine guns which the Marines did use. There is some Japanese rifle grenade fu in the novel.

There is even a scene with a very big, nasty species of monitor lizard that inhabits Cokoni.

As per the previous Sgt. Hawk books, there is an apocalyptic climax with a battle between Marines and Japanese paratroopers. You are physically exhausted when you finish a Sgt. Hawk novel.

So, this is the end for the series. And it was worth it. I sequentially knocked off one Sgt. Hawk novel per week. Hawk is not quite Conan but Clay makes it known that Hawk has found his calling in fighting the Japanese. This is a fun men’s series. Procure these and read them! $3.99 Kindle or $10.99 for paperback.