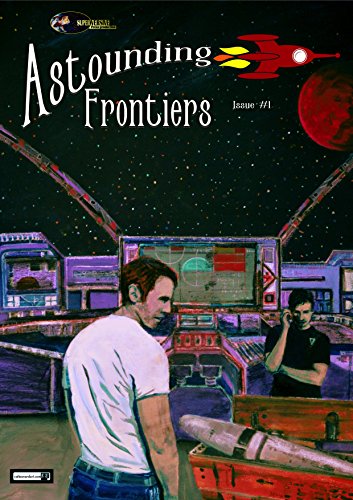 Astounding Frontiers is a brand new magazine that embraces the pulp brand– one that promises to “evoke wonder in the way the golden age of science fiction did.” This is absolutely a step in the right direction and I have no doubts that if there had been magazines on the newsstands during the nineties even remotely like this that there would be more people reading and writing science fiction today and the short science fiction scene we have inherited today would be that much less of a wasteland.

Everything you’ve heard the leading lights of the various puppy movements denounce as garbage? It’s basically not here. These are straight ahead stories devoid of naked attempts to be taken seriously by the sort of people that reflexively hate normal people, Western Civilization, rationality, and common sense. Even better, the stories here are short, they don’t waste your time, and deliver their payload with very little in the way of preamble and cruft. Yes, heavy hitters like John C. Wright and Nick Cole are here with with serials that are by themselves worth the price of admission. But there’s some new faces as well, as well as authors that you might not know well enough yet to take a chance on with a full length novel.

I’ve heard so much frustration from authors that want to be part of the short fiction scene but which are arbitrarily excluded for the flimsiest of ideological reasons. I’m not talking about the hard core people, either. I’m talking about extremely inoffensive moderates whose only crime is that their fail to join into the current “Two Minutes Hate” aggressively enough for the gatekeepers. And then there’s the guy that submitted to a Weird Tales revival that got a rejection note that stated that his story had too much wonder. (?!)

So yes, we absolutely need more short fiction venues like this. There’s so much to be done to rebuild and Cirsova and Riding the Red Horse can’t do bear the load alone. I believe this venture will be a success and that it will find an audience. It’s just got too much going for it to do otherwise.

Of course if I’m critiquing something, it’s generally going to be from the vantage point of pulp stories from the twenties and thirties, not the so-called “Golden Age” which the editors are shooting for. In fact, the term “pulp” does not appear anywhere in this magazine. That being the case, my review of the material is going to be rather more about my own vision for short science fiction and fantasy rather than a strictly neutral assessment of the material.

First up… I have to say something about the cover. On the plus side, its overall message is one of “hey, this is blue collar science fiction, y’all.” I definitely like that theme, and it’s definitely something that Alex Kimball has picked up on in his short fiction reviews of old pulp stories and that Jon Mollison has embraced with Sudden Rescue. From a hard core pulp perspective I have to ask, though: why are the two guys just standing around? Where’s the danger? The menace? The classy space dame in trouble? Where is the dude punching out an alien like the cover to the first issue of Astounding Stories?

The subtext is that it’s just not supposed to be that sort of magazine. Does this message match the actual contents here…? Let’s take a look!

“The Death Ride of SUNS Joyeuse” by Patrick S. Baker — This one hearkens back to classic Star Trek and tabletop tactical space games. The action and military science fiction aspects are cranked up to eleven… and unlike, say, Honor Harrington or recent Star Trek material, the aggressively soul numbing “strong female character” element is completely absent. My one criticism is that the heroes are just a little bit too effective… and their foes are thus little more than clay pigeons for them to beat up on. Nevertheless, this is a good example of a sort of “Nutty Nuggets” approach to science fiction.

“Riders of the Red Shift” by Lou Antonelli — I would really characterize this as more of a post-pulp type of tale. But not outright anti-pulp if that makes sense. Like an Isaac Asimov story, it is conveyed primarily through characters standing around talking. (Which is, come to think of it, what the cover is telegraphing about what is inside.) Yes, it has romantic space Texans doing astonishing and daring things. But all of that happened in the past. We find out about it second hand. You have all this imagery of a gritty space western invoked… but it’s filtered through things like a coherent future history, science fact, and a mild version of what passes for “realism” among post-modernists. There is some strong material here– and it is not imbued at all with the sort of self-loathing you see in, say, Philip K. Dick’s The Man in High Castle. There’s a real admiration for the Texans displayed here… but I think people want to immerse themselves in the heroic rather have it portrayed with this sort of emotional distance.

“According to Culture” by Declan Finn — Russell Newquist has argued that Dwayne Johnson aka “The Rock” really the living embodiment of what pulp is all about. And I can sort of see that. I mean, pulp puts entertainment first. It’s got a lot of action. It is not the fiction of people that are going out of their way to be uber-serious or to be taken seriously. But the sort of camp and snarkiness he projects is, in my opinion, more in line with the silver age than anything I see in “real” pulp. And Finn’s piece is definitely closer in spirit to contemporary concepts of the action genre than, say, A. Merritt or Edgar Rice Burroughs. This is in fact Liam Neeson’s “Taken” in space! And to his credit, Declan Finn does not pull any punches. His description of the imperial capital was I thought reminiscent of the sort of prose in Jack Williamson’s Legion of Space. And like Larry Correia’s Hard Magic, this tale pulls off a prefect false denouement that segues into a final round where the combatants pull out all the stops. This is a really strong piece! And I think it is even better because it deals with real ideas and real political questions rather than trying to produce a neutral work that pretends that all of that sort of thing necessarily falls under the domain of “message”. (It doesn’t!)

“Stopover on Monta Colony” by Erin Lale — Okay, this one is trying to be an out and out pulp story. Unfortunately it plays to the stereotypes surrounding the pulps rather than embodying anything like the actual ethos of the old stories. Yes, something like this scenario could happen in a particularly pulpy Traveller scenario. Yes, the mystery is something like Stanley Weinbaum might have set up. But the male narrator is a complete schlub. He is little more than a chauffeur. He comes off as being downright breathless trying to keep up with his foil. This sort of dynamic is of course ubiquitous today. (It’s even the central flaw of the Rogue One Star Wars prequel.) But this type of anti-character is a very recent phenomenon and is completely out of place in a piece of fiction that presents itself as being an old school science fiction tale.

“Watson’s Demon” by Sarah Salviander — This story features no action whatsoever. No classy dames. No punching. No pulse-pounding thrills. No ape men. No lost cities. No monsters. Nothing at all that is even remotely in line with most peoples’ concept of the pulps. And yet… it is more pulpy than practically any other piece here. Why? It alludes to the bible in order to convey something significant about the action. It presents real science in the context of the story in order to communicate what is happening and why. In this way, Sarah Salviander has more in common with guys like A. Merrit and A. E. Van Vogt than a lot of people invoking pulpy tropes today. The reason for that is that her writing is an expression of the same sort of cultural norms that are infused into the best pulp fiction.

Now… I have not read John C. Wright’s Somewither, so I am passing over the opening installment to its sequel “Nowither” here. And Nick Cole and Jason Anspach’s “Star Wars Not Star Wars” serial certainly looks set to deliver the kind of Star Wars action that Disney is incapable of imagining. So I’m going out on a limb here when I say that the crown jewel of this issue is actually Ben Wheeler’s “In the Seraglio of the Sheik of Mars.” This is, I think, exactly the sort of planetary romance tale that Alex at Cirsova has had a devil of a time finding people to write. It is the only piece to feature romantic attraction between two likable characters– the true touchstone of all great pulp stories. Even better, it features real Christianity and real Islam rather than the usual dumbed down fake religions which too often end up being a lazy skeptic’s naked attack on religion in general. Finally… it reads like literate pulp rather than a caricature of old style science fiction. It is awesome and I’m absolutely dying to read the next installment.

If you haven’t gotten your copy of this magazine already, do so today! At three bucks, it is one of the best bargains in fantasy and science fiction around. Check it out!