SHORT FICTION: In the Gloaming O My Darling by Misha Burnett 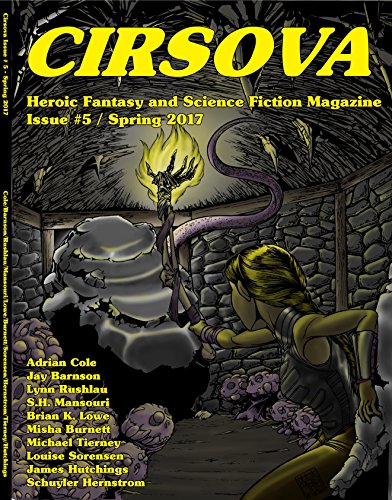 Before we get into this one, I have to say… I’ve been discussing games, science fiction, and fantasy online with him for about four years. He’s one of twelve people that took the time to write an introduction to my book Appendix N, too. While we’re as about as close as two people can get in the quasi-reality of online blogging and social media, we’re still very different people with fairly different tastes and goals. Being objective in a discussion of this story is going to be fairly difficult for two reasons, then.

Really, though… you can’t discuss what’s going on in short science fiction and fantasy without touching on Misha’s stories and commentary. He has a surprising amount of influence and a wide range of people pay attention to his commentary.

Before I get into why this is such a good story, I do want to get some of the hard stuff out of the way. First, this is I think a good example of a contemporary New Wave story. It’s not the sort of tale I have advocated in my critiques. Indeed, the premise and arc of the tale are inverted, at least compared to the other stories in this issue of Cirsova. Rather than a stunningly good looking Andromeda type chained to the rocks, we have a couple of young boys. Rather than a fairy-tale ending we have… something horrible.

To be sure, if this is the only type of story there was, I wouldn’t read much at all. That said, I have to confess that this is exceedingly well executed. First I identify with the rural boy over the city slicker. I experience the one’s annoyance at the other right along with him. Then I flip and realize I’d judged the city boy too harshly and actually quite like him. When the action comes, not only is everything well established so that I can grasp what is happening and why, but I also care about the characters. Something is at stake for me.

The most pernicious problem facing contemporary authors have these days is their inability to make likable characters. Likability necessarily hinges on a moral dimension that people are largely ignorant of or else actively at war with. And Misha is one of what seems like a vanishingly small number of people these days that actually “get” it. You can’t pull this sort of thing off by checking of boxes or following the script of the hero’s journey. Misha actually makes it seem easy, though.

At the same time, however, there are lines. And it is the part of the New Wave to find them and then either obliterate them or else come right up to the limit. Misha does the latter here. And it’s similar to the preceeding story by Louise Sorensen. I’ve had all the Strong Female Characters I can stand. After David Weber novels and the Iron Fist series, I’ve just seen all I really need to of that. Reading “Darla of Deodanth”, I can say though that if you take out the Greek Chorus of dweeby male cheerleaders and just serve up a straight-ahead action tale where the lead doesn’t judo flip guy that weigh three times as much as her, then I can go along with it.

You see a similar thing here, but it’s more subtle. After contemporary “gay” political issues being shoehorned into nearly every episode of Doctor Who during Matt Smith’s run… after having the what could have been a very fun Flash series ruined by brazenly hamfisted efforts to unnecessarily incorporate gay characters… after seeing traditional romantic story beats completely disappear outside a gay couples who now get storybook romances where heterosexual couples are shown in downright godawful marriages if they’re shown being married at all…. After all of that, I have simply had it. I’m quite happy to read things from before 1940 just so to get a break from people jamming these sorts of opinions into my face.

Needless to say, a story about two naked boys chained up to rocks as some sort of offering to horrible creatures…? This is heading into “The Ones Who Walk Away from Omelas” territory just a little bit more than I’m comfortable with. That said, I have to admit… I was completely swept up by this story. And again, these are not the usual pulp fantasy story beats at all, but something in an entirely different direction.

It shouldn’t be possible. Deep Ones are among the most discussed, most complained about, most referenced, and most critiqued aspect of Lovecraft’s oeuvre. And yet… here is a riff on “The Shadow Over Insmouth” that does something different. Rather than go the tiresome route of turning Lovecraft’s racism on its head, we get a new take on an old myth: Beautiful water nymphs that lure the simple to the their deaths.

The sort of thing Lovecraft tended to only show at a distance, Misha serves up in eerily intimate detail. And once the characters are established and the basic situation is set up, I am positively transported once the action kicks off. It’s like being there. The confusion and fright of the protagonists is my own. As is their terror and awe and wonder and shock when reality finally sets in.

If you’re going to pay homage to H. P. Lovecraft this really is the one thing your story needs to accomplish: this sort of kicker where something that is already horrible gains another order of magnitude of awfulness in the space of a paragraph.