SHORT FICTION: “It’s Me or the Robot” by Mark Kirkbride 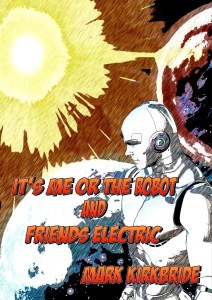 Well I sure picked the perfect time to subscribe to Sci Phi Journal. I was very pleased to receive a copy of Forbidden Thoughts as a subscriber bonus just this week! If you haven’t already, you might want to cruise on over to their website and get on board. The subscription has more than paid for itself already!

Now… I do hate to break it to you, but Sci Phi is not a pulp magazine. And there’s a lot of discussion about what that would even mean, so let me just clear up the biggest difference that would make. If you are reading a pulp story, then you will hold it to the same standards that you would do with the latest Star Wars movie. A non-pulp story is exempt from those standards for some reason. I have no idea why. It’s confusing to me really.

To illustrate this, let’s take a page from Mr. Plinkett and break down this story “It’s Me or the Robot” on each of characters, story, and emotion. Now… before we dive in, let me make it clear that I don’t mean any offense to the author Mark Kirkbride. He is doing his thing and that’s fine. I’m sure he feels as strongly about his creative decisions as Rawle Nyanzi. We have very different views about what makes for a good story… and that’s okay. But talking about how people really don’t do things the way that I would is my thing. While I hate having to make an object lesson of the work of someone that is in all probability a super nice person, well… this is me here, after all.

So put on your flame retardant asbestos suit. This is going to be a wild ride!

Characters: The chief characters of this story are a hapless dweeb of a husband and his exasperated wife. I would not really characterize this as a creative choice per se. This is more of a cultural default, really. It’s ubiquitous, showing up in everything from commercials to holiday movies like Jingle All the Way to little skits at your local church. It is not merely unimaginative. It’s toxic. And given the hew and cry that you would face if you decided to take a different tack, I guess I can’t blame anyone for doing this. But from a story standpoint, these sorts of characters are a disaster because they are inherently unlikable.

Story: Okay, this is an old, old story. And it’s a good premise. How does story work, really…? Well, it takes some time to establish the characters. You have to have a series of scenes that establish both likable and unlikable characters and why they are likable or unlikable. There has to be something at stake. And the whole point of every scene is to deliver a cascade emotional payloads. If you don’t have good characters and you don’t have a strong emotional payload… then everything about the story is pretty well irrelevant. Given that we’ve started this off with unlikable characters… there’s just not much to say on this point. (I suppose I might enjoy seeing a particularly unlikable character get his comeuppance at the end… but these characters aren’t that sort of “unlikable.”)

Emotion: You know, we all really like H.A.L. in 2001. We really like the Terminator in T2. Great characters. As far as this particular story goes, something like it was done quite recently in the film Ex Machina. The emotional beats in that film are well established and conveyed quite well even if they weren’t the ones I would otherwise want to see. And again, you can see how it is difficult to separate story from emotion– the two are that intertwined! Going just by the title of this piece here… the key emotional thrust is an ultimatum delivered in the context of an unhappy marriage. Now… I’m going to go out on a limb here. But I think this is precisely the sort of emotional payload that people are looking to escape from when they sit down to read science fiction. It doesn’t make any sense to me why someone would lead off with that outside of college literary magazine.

Now that we’ve gone through Mr. Plinkett’s three point analysis, it occurs to me that pulp stories really do go one step further. A great pulp story has equal parts of adventure, wonder, and romance. The combination of all three yields up something called AWESOME. The repudiation of these three classic pulp elements necessarily shortchanges characters, stories, and emotion. Which leads to– at best– mediocre stories. And given just how great the short fiction of A. Merritt, Robert E. Howard, and C. L. Moore really was, it’s baffling to me that the pulp ethos should be left in the trash bin of the 1930’s– while the repudiation of these elements should be taken as a “safe” sort of default setting.

That’s why I tell everyone that asks me for writing advice– and even people that don’t– to regress harder. All of our literary “progress” since 1940 has been anything but. To move forward we actually have to step back.