Short Reviews – A Can of Vacuum, by L. Ron Hubbard

L. Ron Hubbard’s A Can of Vacuum appeared in the December 1949 issue of Astounding Science Fiction. It can be read here at Archive.org. 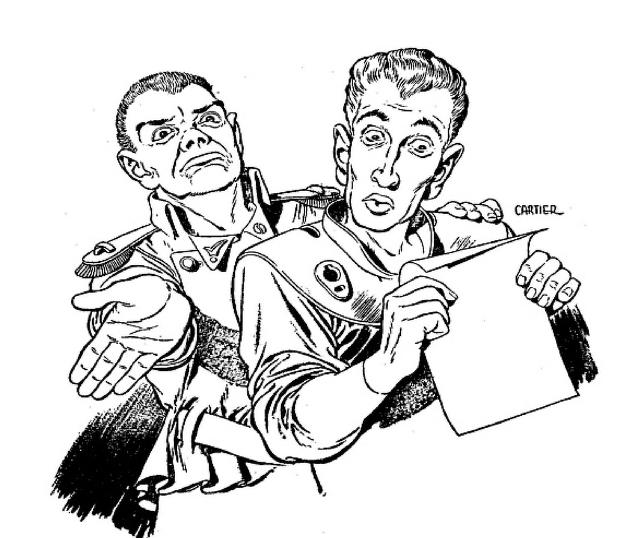 A Can of Vacuum is a droll Mil-SF short about officer-hazing (which makes Hubbard’s own military service worth briefly noting; here, it’s been noted). A green ensign, Bigby Owen Pettigrew, has shown up on base all bright-eyed and ready to make a good impression. The project assignment officer. Scout Commander Carpdyke, finds this exasperating and, as the regular prankster around the base, has quite the scheme to put young Pettigrew in his place.

Carpdyke tells him about a new phlebotinum-based technology: Rudey Rays, which could solve all the galaxy’s problems if only they could be harnessed. It’s all very new and very top secret which is why the Ensign has never heard of them before. Carpdyke issues the green officer bogus orders to procure a quart of rudey rays by any means necessary. He hopes to send Pettigrew on a wild goose chase to keep him out of his hair for a while.

Of course, things go immediately wrong. The supply officer Carpdyke was counting on to play along was out, and his fill-in took the orders seriously. Pettigrew is off with a commandeered ship to go looking for and collect rudey rays around novas. Shit hits the fan, and the base is in a panic to find the missing ensign and recover the ship he’s taken off with. The base commander thinks he’s screwed and has to keep things under wraps, because it happened on his watch and would be seen that he’d been complicit in having turned a blind-eye to the hazing of new officers—it HAS to be dealt with in house.

There’s a twist. Because of course there has to be a twist, but I’d rather not spoil it for you. Just go ahead and read it; you’ll thank me.

There’s a certain charm and warmth to L. Ron Hubbard’s writing that sets him apart from most of the writers I’ve reviewed in Astounding. It flows well and the humor, while not brilliant, feels natural and easy, never forced. I’m only going on a couple of his stories and a handful of issues, but more than any other of Campbell’s writers I’ve read, Hubbard would’ve felt at home in the pages of pulps. His stories are a release valve for the tension and pressure built up by all of the serious thinkery going on in the pages of Campbell’s Astounding. A small-brain rube like me can still find a story to make me smile in the magazine I’m reading to feel smart and superior to folks with BEMs and babes on the covers of their zines.