Action on Azura by Robertson Osborne was featured in the Fall 1949 issue of Planet Stories. 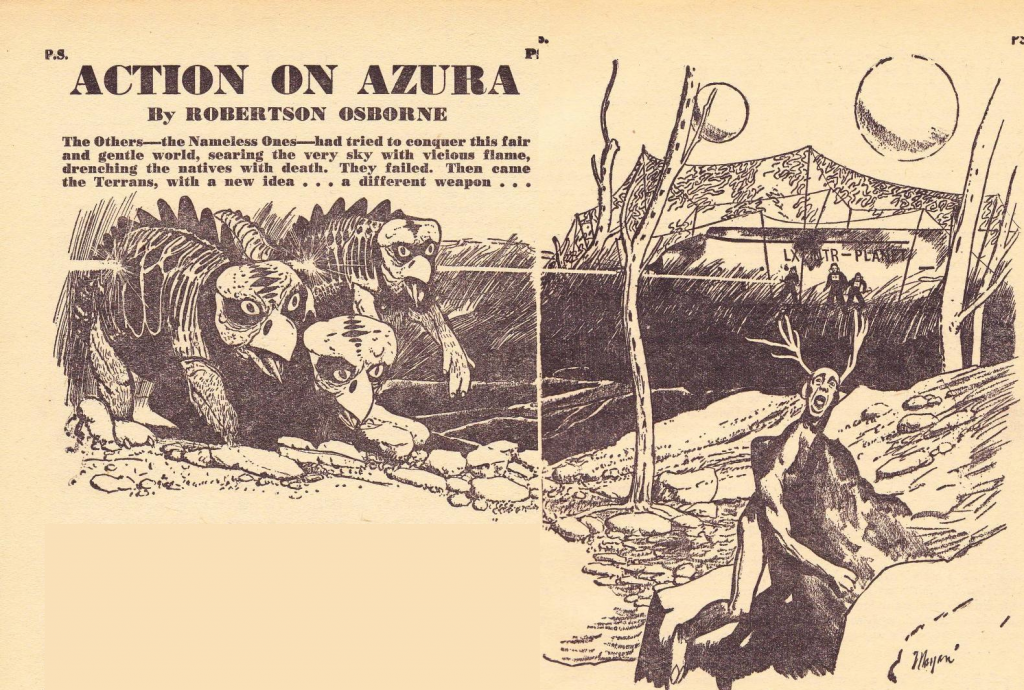 Yes, ‘this fair and gentle world’ populated by giant armor-hided predators, spear throwing weasel-monkey-dog-rat things, bombardier birds, and folks with tentacles growing out of their heads…

Action on Azura is probably the second best story in the Fall issue.  It is a planetary contact story, much like those which were popular in SF film into the 50s and 60s and made up a sizable chunk of the premises of various Star Trek episodes.

Azura has been driven to the brink of ruin by an alien race called the Invaders (not the “Nameless Ones”); the natives are very distrustful of outsiders, and most of the frontier traders have been run off the planet.  It’s up to the crew of Special Agent, a small scout vessel employed by Contact Incorporated, to establish communications with the natives and convince them that it would be to their mutual benefit to allow Earth to set up an outpost on Azura so they can fight the Invaders together.

You end up with a typical anthropological sci-fi story—the challenge of a linguist trying to communicate friendly intentions—that’s colored by some really cool beasties.  While most of the creatures on Azura bear familiar-sounding names, like ‘monkey-rats’ or ‘hell-cats’, these earth approximate names do little to capture their weirdness; the hell-cats are fast-moving, horse-sized armadillo-like predators with meter-wide jaws, and the monkey-rats are semi-intelligent tool-using beings with four legs and two multi-tentacled arms described as ‘fearless creatures, as large as cocker spaniels’.  The natives also look kind of like humans, but with tentacles coming out of their heads.

The linguist is the one guy who isn’t ex-military, and he feels kind of useless on the mission (post-war guilt of the non-vet creeping into sci-fi!?), but his unique skills, clever plan, and, of course, his lack of military reflex help them win the trust of Azurans so that together they could rebuild Azura and keep the Invaders from threatening the world and its people ever again.

What makes Action on Azura interesting is that you have private firms responsible for making contact and opening negotiation on alien worlds on behalf of Earth.  In many of film versions of similar tales, you will often see NACA/NASA or fictional analogs hitting the planets’ surface, doing research and making alien contact, while here the private firm’s goal is to establish contact and open relations so that it does not become necessary for a government organization to step in.  All in all, it was a good story, but finished disappointingly dameless to close out a rather dame-light issue.  I can’t help but feel like if this had been written a few years earlier, the Azurans would’ve been led by some kind of kick-ass princess (with tentacles!) who the linguist would’ve fallen in love with and signed the best treaty of all.