…And Now You Don’t (Part 2), by Isaac Asimov was published in the December 1949 issue of Astounding Science Fiction. It can be read here at Archive.org. 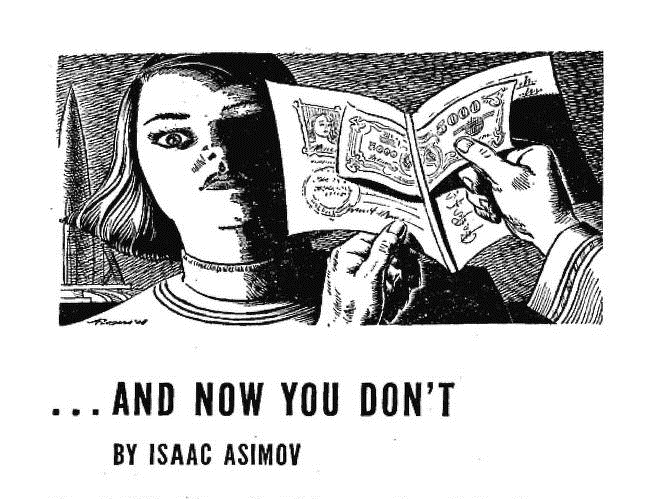 A young woman privy to knowledge of a galaxy-shaking conspiracy finds herself a potential political prisoner on the world where a tyrant had sought to rebuild a space empire; the evil ephebophilic dictator has seized her guardian and intends to force the teenage girl to be his space queen as he follows in the footsteps of the would-be emperor of 50 years prior!

Armed with only her wits and the warning of the waning-favored mistress of the “First Citizen”, Arcadia Darell must escape the nets laid out for her by the conspirators…

This set-up would be absolutely thrilling in the hands of any other big-name 1940s author besides Asimov, but here we are!

What little bits of interesting storytelling are present here get bogged down by Asimov’s utter inability to pace his narratives, going into lengthy digressions or passages, such as:

Tradition, says the historian, begging the question. Because of certain and various mysterious numerical relationships, say the mystics, cultists, numerologists, metaphysicists. Because the original home-planet of humanity had certain natural periods of rotation and revolution from which those relationships could be derived, say a very few.

No one really knew.
Nevertheless, the date on which the Foundation cruise, the Hober Mallow met the Kalganian squadron, headed by the Fearless, and, upon refusing to allow a search party to board, was blasted into smoldering wrecked was 185; 11692 G.E. That is, it was the 185th day of the 11,692nd year of the Galactic Era which dated from the accession of the first Emperor of the traditional Kamble dynasty. It was also 185; 419 A.S.—dating from the birth of Seldon—or 185; 348 Y.F.—dating from the establishment of the Foundation. On Kalgan it was 185; 56 F.C.—dating from the establishment of the First Citizenship of the Mule. In each case, of course, for convenience, the year was so arranged as to yield the same day number regardless of the actual day upon which the era began.

And, in addition, to all the millions of worlds of the Galaxy, there were millions of local times, based on the motions of their own particularly heavenly neighbors.

Yet to Dr. Darell, it was none of these at all. It was simply and quite precisely the thirty-second day since Arcadia had left Terminus.

This is how Asimov chose to begin the chapter immediately following the one in which Arcadia is on the verge of escaping to Trantor.

There is maybe a good short story buried somewhere in Asimov’s meandering and often too matter-of-fact prose, but if there was an editor to wring it out of him, it certainly wasn’t Campbell.

Credit where credit is due; less of Part 2 felt like it could be thrown away at no detriment to the story than Part 1. Amusingly, the recap covers way more stuff from previous Foundation stories than any action you might have missed from Part 1 (I guess since there nearly wasn’t any). There was POTENTIAL for an exciting story here, even if the prose itself failed to live up to it.

Think you have what it takes to be a Pro SFF writer? How about semi-Pro? Cirsova Magazine will be opening for 2019 submissions on October 1st and paying 1.25 cents per word for action-packed, thrilling, and provocatively weird Science Fiction and Fantasy! If you’ve been following Short Reviews here at Castalia House, you know what we love and you know what we loathe. So, if you’re interested in submitting, consider taking a peak at the archives here as a refresher, and check out Cirsova #9, which is out now!