Chance Remarks, by J.J. Coupling, and The Great Floods, by L. Sprague de Camp, were the featured essays in the October 1949 issue of Astounding. They can be read here at Archive.org. 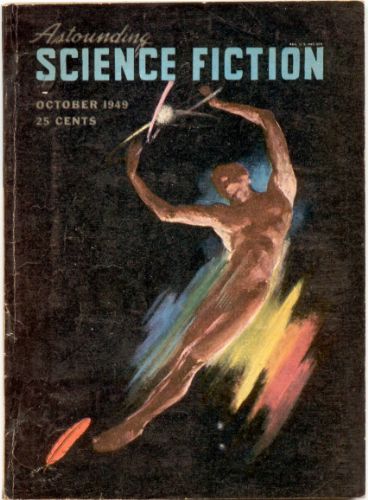 I probably won’t normally cover the essays in Astounding, but there are a few things I wanted to spotlight.

The first essay in this issue, Chance Remarks, is a bit about cybernetics and AI-generated text using predictive patterns based on statistical placement of characters and words.

It specifically refers to Raymond F. Jones’ “Fifty Million Monkeys” and goes on to explain how computers (or rather the mathematical processes that would become associated with them) would be able to spontaneously generate text, and shows some of the degrees to which content could be generated seemingly randomly. It’s a much more approachable essay on cybernetics than the previous issue’s, and worth it for this gem alone:

In obtaining the following passage, a pair of words was chosen at random in a novel. The novel was then read through until the second of these words was encountered again, and the word following it was added, and so on. This laborious process evoked:

“THE HEAD AND IN FRONTAL ATTACK ON AN ENGLISH WRITER THAT THE CHARACTER OF THIS POINT IS THEREFORE ANOTHER METHOD FOR THE LETTERS THAT THE TIME OF WHO EVER TOLD THE PROBLEM FOR AN UNEXPECTED.”

Here we have merely an example of words chosen randomly according to certain statistics. We may, however, have a strange feeling that we have seen something like this before. Certain passages in “Ulysses” and “Finnegan’s Wake” are scarcely more intelligible.

The other essay is The Great Floods, a droll piece by L. Sprague de Camp about flood myths from around the world and historical examples. The general conclusion is that flood myths are big-fish stories that grow in the telling while having their origins in very real historical events, though once they reach a mythic stage, they can tell you very little about the actual event which may have inspired that particular myth.  “And if any whole continent ever sank beneath the ocean, it must have been so long ago that our ancestors were still sitting on a branch and scratching, and couldn’t have created any Atlantean Empire.”