Double Trouble by Carl Jacobi appeared in the Spring 1945 Issue of Planet Stories. It can be read here at Archive.org.

“When Annabella C. Flowers, that renowned writer of science fiction, visiphoned me at Crater City, Mars, to meet her here[on Callisto], I had thought she was crazy. But Miss Flowers, known to her friends as Grannie Annie, had always been mildly crazy. If you haven’t read her books, you’ve missed something. She’s the author of Lady of the Green Flames, Lady of the Runaway Planet, Lady of the Crimson Space-Beast, and other works of science fiction. Blood-and-thunder as these books are, however, they have one redeeming feature—authenticity of background. Grannie Annie was the original research digger-upper, and when she laid the setting of a yarn on a star of the sixth magnitude, only a transportation-velocity of less than light could prevent her from visiting her “stage” in person.” 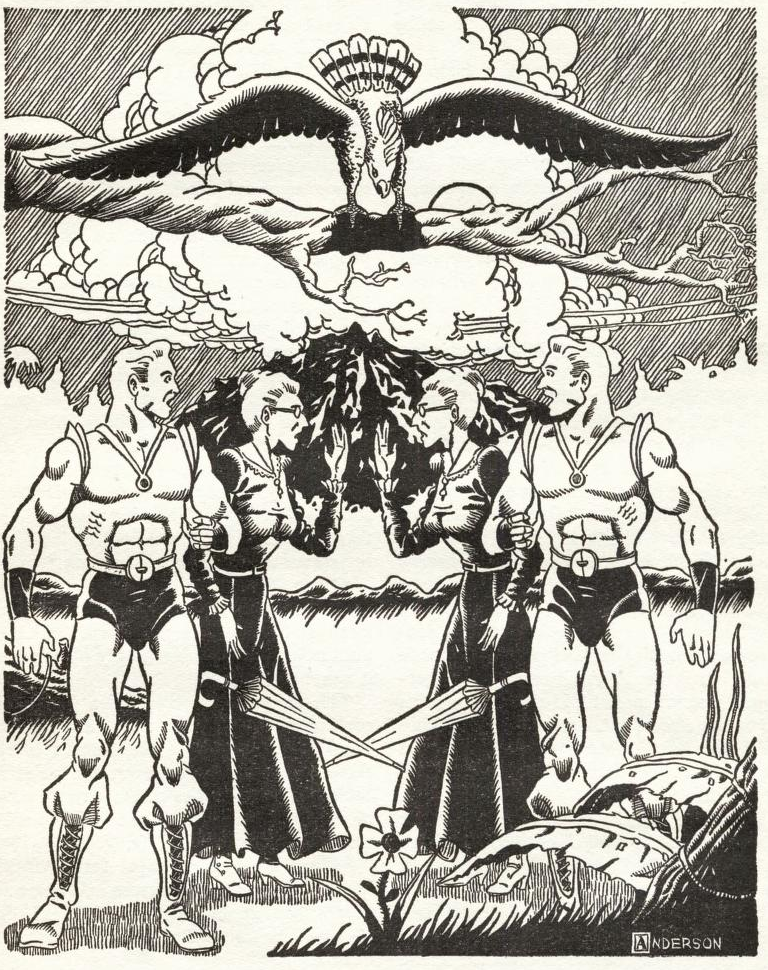 Double Trouble gives us an intrepid older lady, her illustrator, her driver and an old prospector friend on the exotic moon of Callisto, which is being mined for Acoustix, an ore that enhances vibrations. See, Martians are able to communicate pseudo-telepathically as well as vocally—it’s actually the result of an ultra-high frequency vibration by which they transmit their thoughts, but with age the ability to produce and receive the wavelength decreases… so think of the Acoustix as the key component of a Martian telepathic hearing aid.

One of the mining operations, Larynx Incorporated, has been experiencing trouble; their miners have been stricken with Red Spot Fever, abandoning the work camps, and disappearing out in the no-man’s land.  Grannie Annie is determined to get to the bottom of the story for her next book.

One of the coolest parts of this story are the weird cockatoo-like birds. Turns out that not only can they mimic speech like earth cockatoos, they mimic images, using the resonance frequency amplification of Acoustix to create simulacra. Despite the illustration, these are not perfect duplicates, and are actually based on the Martian illustrator’s illustrations; if you got close enough to one, you’d notice that they were caricatures of persons much like a cockatoo’s mimicry of voice is a caricature of an actual human voice. The villain has figured out how to use these clones in part of his scheme.

At this point, I can’t say how typical or atypical someone like Grannie Annie showing up in the pulps is. All I know is that I shouldn’t be surprised by anything, even a Jessica Fletcher In SpaceTM type character, that turns up in a raygun romance book like Planet Stories. Double Trouble was the second of two Grannie Annie stories by Jacobi published in Planet Stories.