Dutchman’s Gold, Told by Arthur Greyslen and Set Down by Alan Burgess appeared in the June 1944 issue of The Wide World. 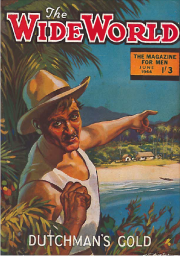 Here’s a story with some stuff to steal! Exotic location, sunken treasure, a crazy villain, and a moray eel named Little Joey.

Arthur Greyslen has been living the good life in a tiny village on Samoa. It’s warm and sunny all the time, life is a paradise of leisure and no one wants for anything—once the yams are planted, everyone can spend the rest of their time swimming, fishing, and chilling out, and life is perfect.

Until a crazy Dutchman shows up waving a treasure map swearing up and down that there’s sunken Spanish gold in lagoon, that is…

Van Meyheim, our titular Dutchman, has pulled up stakes from Rotterdam, liquidated his assets to buy what may well be a crock treasure map off a sailor and travel all the way to Samoa. While there is a wrecked ship in the lagoon, Greyslen is pretty sure that it was no Spanish treasure galleon—no one has found any gold nor has there ever been any serious rumors of it. Van Meyheim can’t concede that he’s been conned, however, and Greyslen’s willing to humor him. What will it hurt spending some time helping the old codger in his treasure hunt for a promised share?

Greyslen has to help convince the Samoans in his village to take part in the salvage; they don’t have any concept of wealth and the laid-back life they’re used to doesn’t make for the best work ethic among them, but they’re ultimately able to mount a salvage operation. After a couple months of probing, diving, trying to pull up timbers, they think they are finally about to make their big break—a heavy chest is hauled up. When they crack it open, though, it’s full of wet mush. Severely damaged textiles and books that have been reduced to pulp are all remain of the contents.

Aside from the build and masts being wrong, there’s just enough left on a paper fragment (“bar” as in “barque” and “Plymo” as in “Plymouth”) to convince Greyslen that the sunken ship was probably an English merchant ship. Van Meyheim’s having none of it, though. He freaks out, certain that Greyslen must have stolen and hidden the treasure at some point. The story climaxes with frenzied Meyheim tossing Greyslen into a tide pool where Little Joey, the aforementioned monster-sized moray eel, made its home—Greyslen will die if he doesn’t tell the Dutchman where the treasure is hidden. Fortunately for Greyslen, one of his Samoan friends had heard the commotion and followed them—Meyheim doesn’t know much Samoan yet, so Greyslen is able to trick him and shout to his buddy what’s going on. Meyheim gets conked out and Little Joey is deprived of his meal.

The story does have a happy ending for Van Meyheim, too, though. Greyslen relates that after Van Meyheim came to, he apologized profusely for being a heel; the pair are now best friends, Van Meyheim has a Samoan wife and several little half-Samoan kids running around, and the real treasure was the friends made along way.

Got 1/3 to half of this issue left, but I’m gonna slide back into SciFi stuff next week.