Flight From Time by Alfred Coppel Jr. appeared in the Winter 1949 issue of Planet Stories. It can be read here at Archive.org. 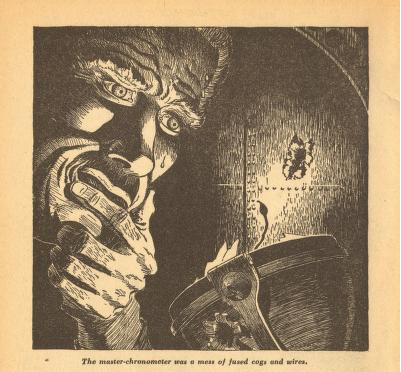 The premise of Flight From Time is a fairly simple one: a criminal is hoping to get away with his crime by hiding out in space until the statute of limitations on his crime has expired. He’s got everything he needs: supplies, food, fuel, entertainment. All he has to do is wait. It’ll be a long and lonely wait, but he can manage and it will be worth it once he can finally put all of his ill-gotten wealth to good use.

Then his ship’s chronometer breaks down. The crook is no mechanic, and he’s unable to fix it. But it’ll be okay—he just has to wait it out. Maybe be a bit more cautious, judge by the rate at which he goes through his provisions over his decade-and-a-half stint.

When his pocket watch breaks, it’s just salt in the wound. But he can make it. He just has to have patience!

Flight From Time is a great Twilight-Zone-esque descent-into-madness sort of tale. At a mere five pages, it never drags for the reader, (though it’s hell for the story’s anti-hero).

There’s a twist, because in a story like this, of course there is—there has to be. And while frankly it was not quite what I expected, I’m not sure if I like it better or worse or worse than the twist that I THOUGHT I saw coming.