Hide and Seek by Arthur C. Clarke appeared in the September 1949 issue of Astounding Science Fiction. It can be read here at Archive.org. 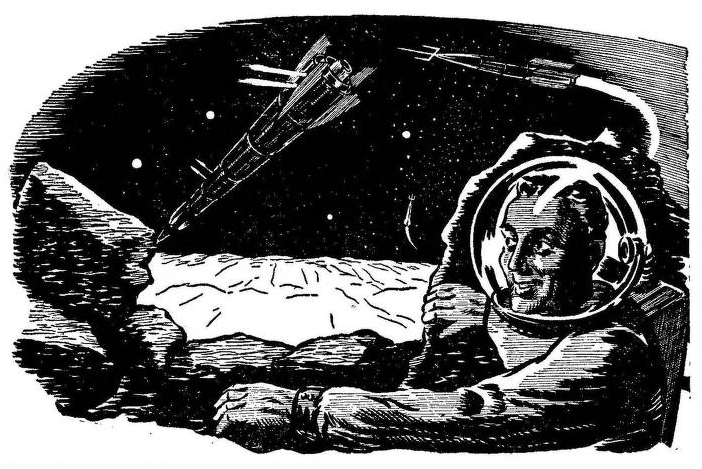 Arthur C. Clarke’s Hide and Seek is the first really good thing in this issue of Astounding. Clocking in at 9 pages, if it ends up being the only good story in a 160 page issue, it will fail to hold the ravenous ghost of Theodore Sturgeon at bay.

More like something you’d see in Planet Stories than anything I’ve read in Campbell-era Astounding thus far, Hide and Seek tells the story of a spy hiding from a space cruiser on Phobos, framed by a story of an old veteran out hunting squirrels with some acquaintances.

While Hide and Seek does delve into Hard SF territory, it does so in a way that explains the whys behind the action rather than losing itself in scientific egg-headery and wank.

The spy, known only as K.15, is being pursued by Commander Smith in the Z-Class cruiser Doradus. He ditches his ship and bails onto Phobos, where he hopes he can hide out until help can arrive. (He’s just like a treed squirrel, right?!)

Phobos is a big lumpy potato in space, with plenty of places K.15 can hide. The Cruiser’s issue is it takes a lot of time and precision to maneuver around the tiny moon. In open space, the minute changes and corrections to course are inconsequential and can be performed over great distances and periods of time. But trying to execute a tight circuit around a 20 kilometer body using only gyros and directional thrusters is a laborious and time-consuming endeavor.

K.15’s strategy is to try to remain on the opposite side of Phobos from the Doradus as best he can, all while dodging scanning missiles that are looking for him, until the cruiser is forced to give up.

The listener/reader proxy mistakenly assumes that the teller of tale is the spy (he had a 50/50 guess); after the narrator leaves in a huff to shoot more squirrels, the other guest corrects him and provides a suitable (if late) explanation for why, despite the framing narrative, the story is 3rd person omniscient.

“As a matter of fact, I believe he met K.15 after the war: they must have had an interesting conversation together. But I thought you knew that Rupert was retired from the service with only the rank of lieutenant commander. The Court of Inquiry could never see his point of view. After all, it just wasn’t reasonable that the commander of the fasted ship in the Fleet couldn’t catch a man in a spacesuit.”