Short Reviews – If This Be Utopia…, by Kris Neville

If This Be Utopia… by Kris Neville appeared in the May 1950 issue of Amazing Stories. It can be read here at Archive.org. 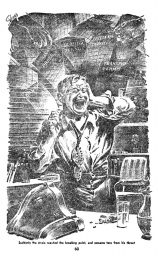 Kris Neville’s “If this Be Utopia…” is a classic example of one of those “warning what the future will be like under this or that political system” sci-fi fables.

In a future where everyone lives under a planned economy, tooled by the state for maximum efficiency (one of those each according to their abilities, each according to their needs, but also the luck of the draw type deals), we meet Mr. Morrison, a mid-level social administrator type who’s struggling to keep his head above water, overusing his alcohol ration cards and getting his hands on more illicitly because he needs it just to keep going.

It’s Mr. Morrison’s job to rate the efficiency of those below him—primarily menial labor workers in mines and factories—and report his finding to those above him. The responsibility is taking its toll, and he bemoans that the common laborer, at least, may leave his work behind him at the end of the day, while the office worker and administrator takes his work home, forever unfinished, to weigh on him at all hours until he resumes it the next day. Basically the whole “all classes envy aspects of the other and utopian efficiency is far from idyllic; actually it’s a nightmare” thing.

Neville’s attack on utopia doesn’t have the bizarre conflicting contradictions that No Winter, No Summer did, and it certainly pushes back against some of the pro-utopian movements within SFF that were going on at the time. It’s a wryly amusing story, but it perhaps highlights the shift in SFF over the decades that the battlefield over utopianism, that was once attacked in stories of swashbuckling action against Leninist tyrants, had moved towards the more dour working-joe and the consequences utopia bestows or inflicts on him.