Keep it Simple, by Frances M. Deegan appeared in the May 1950 issue of Amazing Stories. It can be read here at Archive.org.

I haven’t really read enough Spy-Fi from this period to accurately judge Frances M. Deegan’s Keep It Simple. While it wasn’t quite as high-tension thrilling as the first half of Heinlein’s Gulf, it didn’t wet itself with high-concept wankery at end, and managed to offer a consistently enjoyable, if not particularly groundbreaking, read. 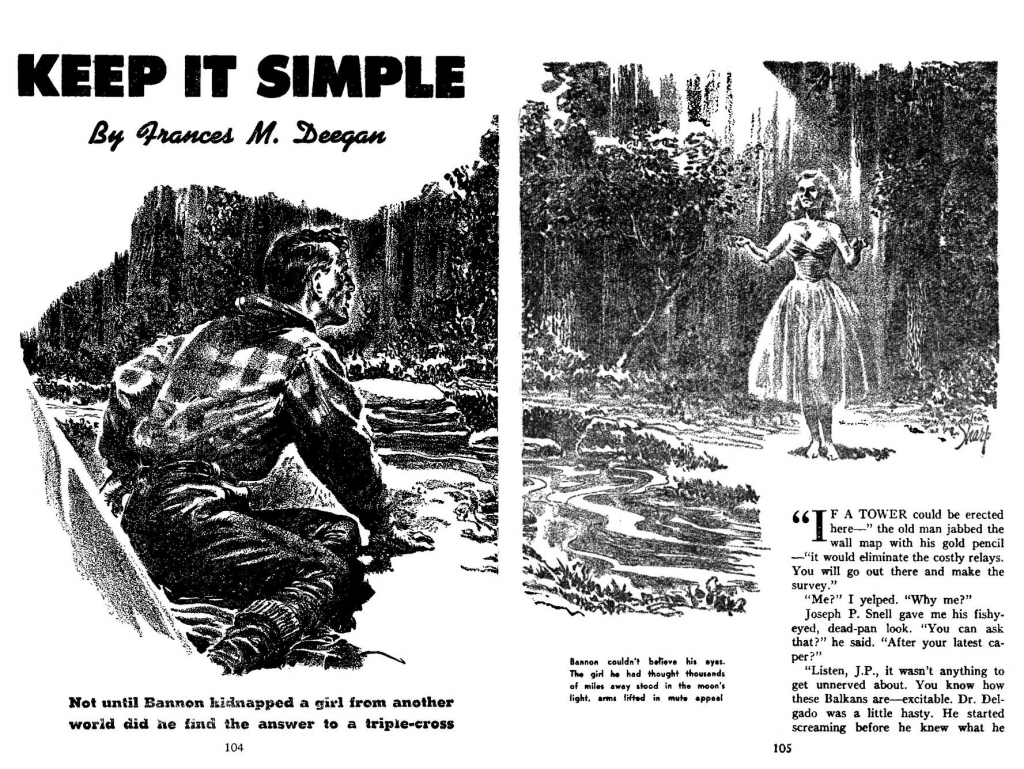 You’ve got a no-nonsense, man-of-action agent who’s been burned, a cute Russo-Slavic dame with a thick accent who’s actually an alien princess or something, and a tidy little Men In Black-style “Aliens are living among us” story that gets the two of them together despite some Cold War-era diplomatic entanglements.

The tale begins with Mike Bannon being dressed down by his friend benefactor, the wealthy Washington tycoon JP Snell, over an incident in which Bannon drove off with Felice, the daughter of the Merovian minister, in the minister’s own private motor car. Papa was a spy, and the daughter wanted out; Bannon was hoping he could give it to her, but the incident puts him on the outs. Snell’s VP, Corboy, gets Bannon sent out to Mount Morgan on pretext to carry out a survey; effectively, the FBI dump him on a mountain to die—he can easily be “disappeared” here without notice: a mountaineering mishap perhaps?

Oddly enough, both Felice and her Papa find Mike on the mountain. The immediate twist is that Felice’s Papa, Dr. Delgado, is not a spy, but an alien, part of an advanced colonizing group of just a select few sent to observe and influence; and Mike’s a second gen, just like the lovely Felice. The had been an expedition that arrived during the first World War, but they’d scattered since. The Minister, Delgado, had been using the rogue nation of Merovia’s spy network to track down the rest of the colonists.  They also have a transport unit that uses a temporary suspension of relative inertial forces to travel at exceptional speeds (here’s your bit of sciency stuff).

Delgado will throw Merovia’s spy ring under the bus in exchange for the super travel device and the State Department’s protection. Bannon sees to Corboy’s comeuppance and gets back in the good graces of his friend and benefactor JP Snell. Bannon and Felice can go honeymoon in Ireland looking for more aliens.