Let The Ants Try by Frederik Pohl (as James MacCreigh) appeared in the Winter 1949 issue of Planet Stories. It can be read here at Archive.org. 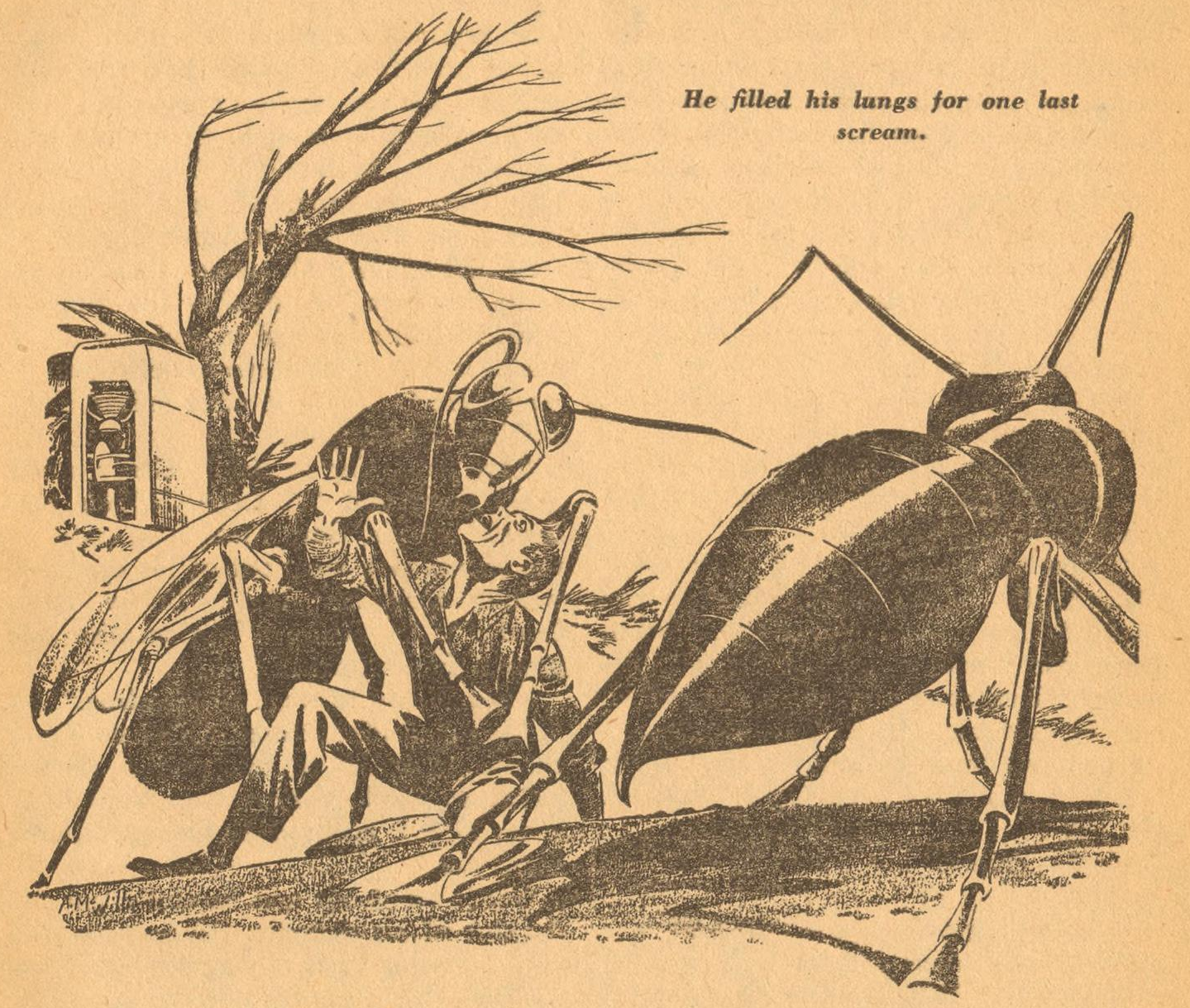 A man’s first enemy is his family—for he sees them first—but he sides with them against the families across the way. And still his neighbors are allies against the Ghettos and Harlems of his town—and his town to him is the heart of the nation—and his nation commands life and death in war.

Let The Ants Try is a great one. A lot of pulp stories I’ve read have tried to mix humor and horror, often with varying results, but I think this one nails it. It has an almost absurd premise, practically a joke, that’s played straight through to the end with pretty terrifying and grisly results.

In the not-too-distant future of 1960, we’re looking at Fallout: Detroit. The bombs fell, and it was hell on earth. Those who died in the initial blast were the lucky ones—those outside the city had the fortune to die slow and miserable deaths from radiation sickness. When the radiation finally died down enough, Dr. Salva Gordy, a professor of mathematics and physics, moved back to the ruins of Detroit, to be where his family had been and because he felt he had nowhere else to go.

Living the life of a wastelander in nuked Detroit, Dr. Gordy spends his days gardening his mu-fruits and sad veggies. He’s joined sometime later by fellow Detroiter and scientist John de Terry, who’s in similar straits. While working their small plot of land together, they remark on the hardships created by the nuclear holocaust:

“We can make a bigger garden,” [John] said. “Clear out that truck, and plant more food. We might even—“ He stopped. Gordy was shaking his head.

“You can’t clear it out,” said Gordy. “It’s rank stuff, a sort of crabgrass with a particularly tough root. I can’t even cut it. It’s all around here, and it’s spreading.”

“I think so. And look.” Gordy beckoned to the other man and led him to the very edge of the cleared area. He bent down, picked up something red and wriggling between his thumb and forefinger.

De Terry took it from his hand: “Another mutation?” He brought the thing close to his eyes. “It’s almost like an ant,” he said. “Except—well, the thorax is all wrong. And it’s soft-bodied.” He fell silent examining the thing.

He said something under his breath, and threw the insect from him. “You wouldn’t have a microscope, I suppose? No—and yet, that thing is hard to believe. It’s an ant, but it doesn’t seem to have a tracheal breathing system at all. It’s something different.”

“Everything’s different,” Gordy said. He pointed to a couple of abandoned rows. “I had carrots there. At least, I thought they were carrots; when I tried to eat them they made me sick.” He sighed heavily. “Humanity has had its chance, John,” he said. “The atomic bomb wasn’t enough; we had to turn everything into a weapon. Even I, I made a weapon out of something that had nothing to do with war. And our weapons have blown up in our faces.”

De Terry grinned. “Maybe the ants will do better. It’s their turn now.”

“I wish it were.” Gordy stirred earth over the boiling entrance to an anthole and watched the insects in their consternation. “They’re too small, I’m afraid.”

“Why, no. These ants are different, Dr. Gordy. Insects have always been small because their breathing system is so poor. But these are mutated. I think—I think they actually have lungs. They could grow, Dr. Gordy. And if ants were the size of men…they’d rule the world.”

“Lunged ants!” Gordy’s eyes gleamed. “Perhaps they will rule the world, John. Perhaps when the human race finally blows itself up once and for all….”

De Terry shook his head, and looked down again at his tattered, filthy clothes. “The next blow-up is the last blow-up,” he said. “The ants come too late, by millions and millions of years.”

A while later, Gordy gets the notion to drop the fact that he’d actually built a time machine for United States War Department. The two scientists’ brilliant plan is to take a few of the lunged ant queens back in time 40 million years. Would the ants become sentient? Could two sapient species evolving side-by-side coexist? Would super-ants unite humanity and prevent wars?

Gordy and De Terry return to their own time to find earth an insect hell-world. De Terry is torn apart by the ants, and Gordy is only kept alive in hopes that he’ll teach the ants to use his time machine.

Like I said, the premise is one that almost demands a comic approach, and it could so easily dip into the farcical tone that some stories go for, but it never really does. It plays it straight, all the way to the end where a brick thrown half-way into the story lands with a brutal pay-off. And it’s that much better for it.