Let’s Do It My Way, by Robert Bloch, was published under the Ziff Davis house name E. K. Jarvis in the May 1950 issue of Amazing Stories. It can be read here at Archive.org.

Now HERE we’ve got a quick little ray-gun thriller like what you’d expect to see out of Planet Stories. (And a good sight better than Bloch’s other entry in this particular issue).

This one pulled a switcheroo on me and delivered more than I expected with a bit of a curve-ball that packed more into this story than its setup first promised.

There’s an Alien ship. The hero’s ship is given the dangerous mission to reconnoiter this alien ship that’s believed to have a weapon that’s capable of completely disintegrating a target within 10 seconds of being shot with its death beams. The crew is tired and on the frontier and been on partial rations and now they’re give a potential suicide mission?

But wait, it gets better! 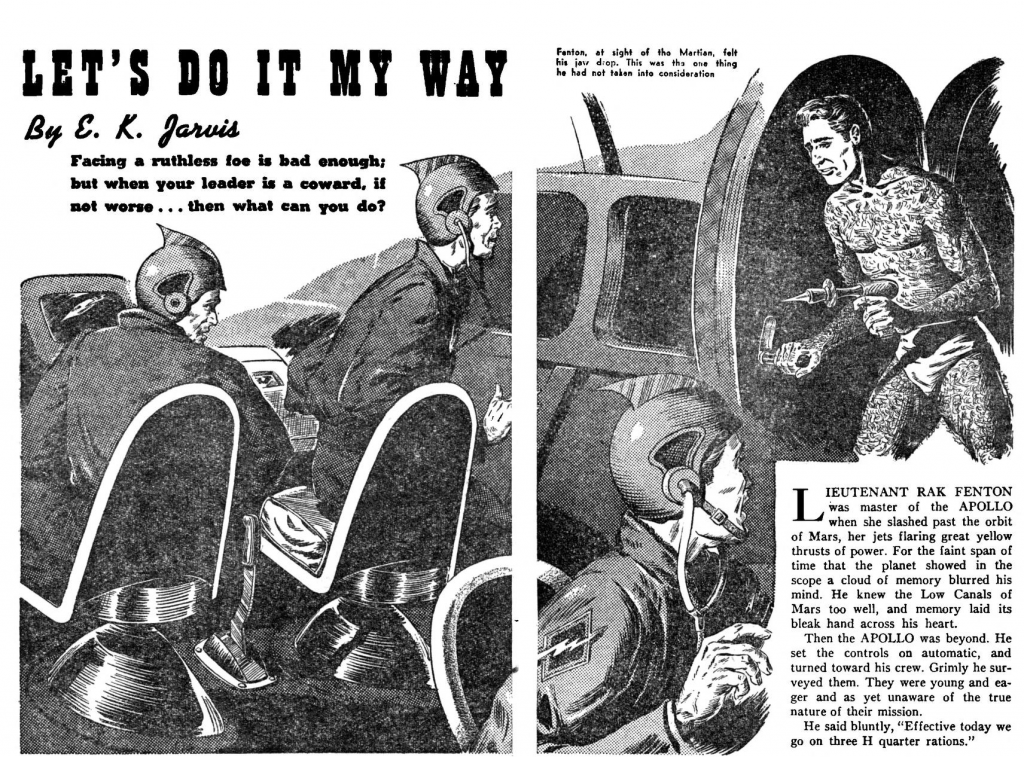 Their mission to recon the Alien ship is secret, but a diplomatic Martian spacer, the Phobos, crosses their path. And Urgan, the official on that Martian ship? Trying to plan a coup against the Martian government!

Rak Fenton has to deceive his own crew, posing as a turn-coat, in order to deceive the treacherous Martian. He has to risk a mutiny and being branded a traitor by his own men to buy time so they can complete their mission, stop Urgan’s plot against the Martian government, and not get caught in the crossfire.

The climax is pretty awesome: Rak is able to set it up so that the Alien ship disintegrates Phobos with the traitor on board, record the whole thing from his ship, and get out while the Alien ship is distracted, reassuring his crew that he knew what he was doing all along!

Definitely check this one out.

Also, be sure to check out the latest release from Cirsova Publishing, Duel Visions: an anthology of weird horror and macabre by Misha Burnett and Louise Sorensen. Plus, our spring issue featuring an all new “lost” Tarzan story will be out next month and is available for pre-order now!