Savage Galahad by Bryce Walton appeared in the Winter 1946 issue of Planet Stories. It can be read here at Archive.org.

One of the occasional trope you’ll see in the pulps is a story from the Bug-Eyed Monster’s perspective. This can often be played for laughs, but even when it is, such as in the case of Fox’s The Last Monster, the ending can be tragic for our monstrous hero from beyond the stars. And it is a tragedy for the titular Galahad.

An ancient tele-empathic bog monster on Venus encounters an unusual alien stumbling through its swamp, and it develops a fascination with it. This alien, a human woman, is not like anything else in the creature’s swamp—its forms and thoughts and emotions are wholly new to creature. And this newness of thought and aesthetic is pleasing to the creature and worth preserving—a difficult task given the dangers posed by the environs and fauna of Venus.

The bog monster protects the woman from a series of progressively escalating encounters with local lifeforms while contemplating the nature of human thoughts and emotion, culminating with the showdown between the giant tentacle-monster in the illustration. 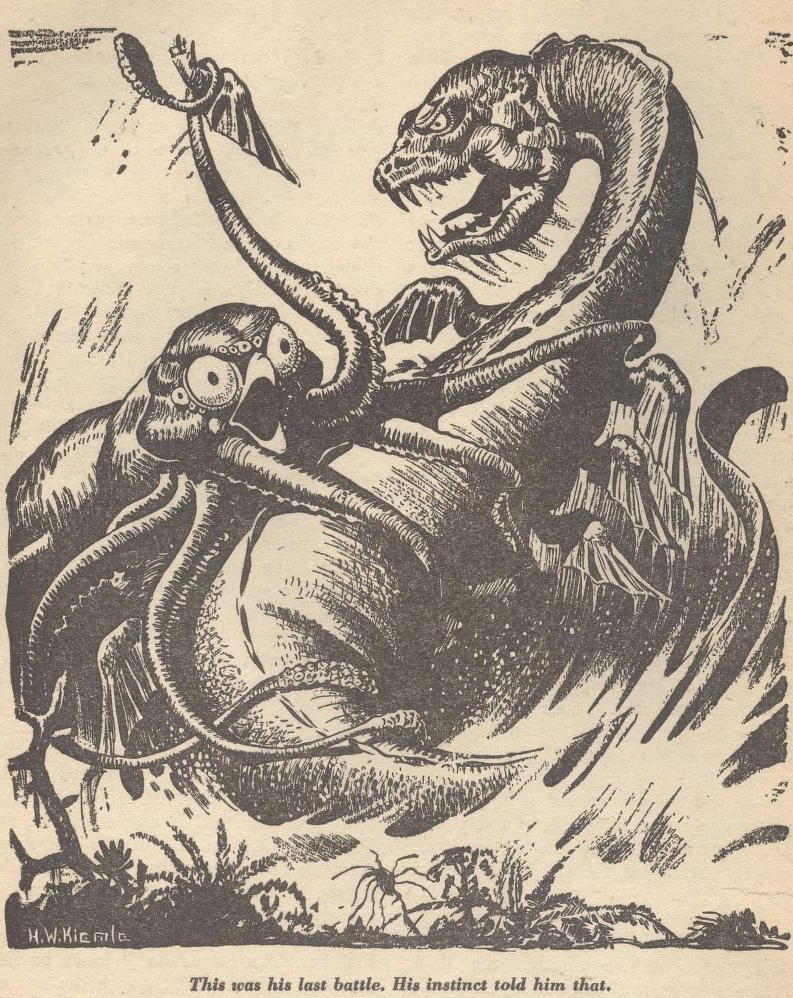 What Walton does best here is establish a truly alien thought pattern; its understanding is empathetic, drawing new ideas in from the mind it touches, processing those alien ideas with its own patterns and adding to them those which it is discovering through the course of the story.

He studied her with curious and new emotions through the thick, heavy-hanging mists, his long serpentine form curled out along the global swamp, undulating between the spongy swaying trunks of two bulbous trees, half-buried in the thick iridescent mud, and effectively hidden from her alien eyes by interlocking crinoids and gigantic towering ferns.

Monstrous insects droned broodingly through the sultry vapors and ventured to light on his gleaming hide. A quick twitch of long steely tendons blotted them out in lightning grips. But his thickly lidded eyes remained fixed on the girl who had come from Earth.

He was not disappointed in her beauty of form. It had a soft, rhythmic smoothly-flowing curvature. It seemed to him a perfect aesthetic creation of its kind. The contrast, too, impressed him—her frail, delicate form treading so fearfully among gigantic flora and fauna of endless varieties, each vying with the others in size in ferocity. Because of this contrast she seemed more beautiful here, perhaps, than she might on her own world. But she should not be here; she would find only death here. She did not understand this world, and she never would.

He felt the pangs of an emotion utterly strange to him. He plunged the supersonic fingers of his brain deeply into hers and found an expression there that would vaguely define that emotion. LOVE. It was an abstract symbol that on her own world meant the crystallization of celestial ideals.

And that is what I must feel for this alien creature, he mused. LOVE.

The many other emotions that accompanied the symbol, LOVE, on her world—hate, jealousy, hope, ambition, despair, courage—these did not enter his massive neural circuits. She felt this great emotion for another being somewhat like her, very close by. This other being, he examined only briefly, for he was ugly, a frantic figure pacing nervously in something they both knew as a SHIP that rested not far away in the swamp. She had wandered away from the SHIP and could not find her way back to it through the mists. And this other organism—MAN—was being driven into complete disintegration with anxiety and fear for her.

But he knew that the man would never find her. There was no jealousy or hate or envy as he curled through the swamp, watching her. That would spoil the beauty of this moment. She would be destroyed soon; other emotions must not distract from the few moments he had in which to absorb this aesthetic thrill of her movements.

The creature slowly learns about and becomes more like, in its thinking, the humans it’s observing. It takes on the ultimate human trait of measured and calculated self-sacrifice. Its actions go counter instinct; it KNOWS its actions are counter instinct—yet it acts on behalf of another, no longer out of simple curiosity, but a firm decision that another being’s life should go on at the cost of its own. It is rationalized irrational behavior. It has learned a selfless love.

If you dig monster-as-the-hero SF stories, Abe Strongjohn has a new one, Anna and the Thing, in Cirsova #7, out now!