Split Personality by William Morrison appeared in the Winter 1954 issue of Fantastic Story Magazine. It can be read here at archive.org. 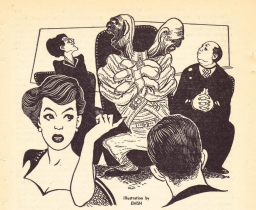 This is one heck of a weird story! Chut-chut, a humanoid alien (a bihumanoid) with a bifurcated head is brought to a shrink to analyze why he’s suffering from headaches and horrible visions in one of his heads. The government needs Chut-chut in tip-top shape for the job that they’re having him perform, but there are no specialists in bihumanoid psychology or psychiatry to get to the bottom of what’s wrong with the poor creature.

Bihumanoids are as bizarre as you’d expect from two-headed creatures. While they look more or less human, aside from the two heads, they are born in thousands from eggs, without knowledge of their father or mother, and their heads eventually bifurcate after a series of moltings, following which certain vision and cognitive abilities either develop or decay in each head as the bihumanoid

Needless to say, standard practices of human psychology and application of Freud don’t yield any results on the alien being, and Split Personality ends up being a clever spoof on the pseudo-science of analytic psychology.

This time the patient seemed too depressed from the start to make any trouble, and was hurried right into one of the offices. Mala was told to have several drugs ready, just in case of emergency, but there turned out to be no need for them. Both heads started talking at once, and all the doctors had to do was start the recorders going and listen. There was hardly time for them to interrupt and get an interpretation in edgewise.

The general line of revelation seemed to be in accord with what had been disclosed in the first session. The left head was mostly obsessed with guilt, the right head with anxiety. Judging from references to their Mother Planet and their Mother Sun, both heads seemed to be suffering from major Oedipus complexes.

Dr. Cordier, Mala noted, seemed to have got over his previous reluctance to take the case. Now he seemed to be gloating over the wealth of material that was being displayed before him. Probably all set to write an article about it for the Psychoanalytic Journal of the Galactic Society, thought Mala.

After talking for about half an hour, both heads seemed to have had enough. The left head quieted down first, and then the right head said, “Destruction, total destruction,” and also fell silent.

Dr. Cordier cleared his throat, and addressed Frank Durr. “The background is becoming clearer,” he said. “Meanwhile, I imagine that the therapeutic effect of the outpouring of repressed feelings must be considerable.”

“He did say, Doctor, that he felt a little better yesterday.”

“Exactly,” agreed Dr. Clane. She said, “It is not customary for us to discuss a case with anyone but the patient himself, or of course, with professional colleagues. However, the circumstances of this care are so unusual—we know so little about the normal behavior of the patient—that I feel it necessary, for once, to make an exception. It is evident that the patient has a deep-seated neurosis of long standing.”

“Well, Chut-chutdoe seem to worry a lot now. But I never noticed it before.”

“It’s been there beneath the surface all along. Now, Dr. Cordier and I agree that there is an Oedipus complex—an extraordinarily strong feeling of attachment to the mother, complicated by the trauma, or shock, of birth, and a desire to return to the womb.”

“He and his kind feel that their planet is their mother. You see, he looks so human, except for those two heads, that most people don’t realize he isn’t born like us at all. He comes from an egg. His kind are born in an ovarium, thousands of them together. They don’t know their mothers or fathers. At a certain stage they break a very thin shell and step out into a heated room. So there isn’t any shock of birth, either.”

The two analysts stared at each other. “Why didn’t you tell us this earlier?” demanded Dr. Clane.

“You didn’t ask me. And I didn’t think it was important.”

“But it’s all here in this physiology textbook I brought along,” he protested.

“This complicates matters,” observed Dr. Cordier. “It would seem that we haven’t touched the core of the neurosis after all. In view of what you have just told us, I’m still inclined to think that the etiology is sexual, but without falling into the usual human patterns.”

“I don’t know, Doctor. Chut-chut is my friend, and I call him ‘he,’ but strictly speaking his kind don’t have any sex until they’re about a hundred years old, when they’re fed a special food. And he’s only about forty now. So I don’t know.”

Mala noticed that he flushed at using the word “sex.” What a really shy person, she thought. But a darling nonetheless.

In the end, the mystery of the bizarre visions that Chut-chut’s heads are experiencing is solved by the young nurse who is addicted to space opera radio shows. As Chut-chut describes one of his manic visions, she recognizes that it’s from one of the series that she follows. Chut-chut was picking up the radio signal through a bar on his cot when he was sleeping. The ‘psychological issue’ was only affecting one of Chut-chut’s heads at a time because it was only the head closest to the bar that was able to pick up on signals.

The occasional switches to first person from the perspective of the nurse was a bit clumsy, but overall this was a fun and enjoyable little story, though I’m beginning to want for some action and adventure after the last few stories in Fantastic.