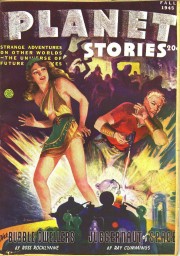 Unlike this crazy get-up on the Parkhurst cover, Joseph Doolin’s interior art shows Edith in a turtle-neck sweater and mini-skirt, giving off kind of a sexy Nancy Drew vibe. In the text, she’s explicitly described as wearing “corduroy breeches”.

The Bubble Dwellers by Ross Rocklynne appeared in the Fall 1945 issue of Planet Stories and was one of two ‘novels’ in this issue.

The Bubble Dwellers was definitely one of those fantastic stories that makes the pulps worth checking out.  An evil hypnotist, strange humanoids with a mystic connection to their once glorious past, and bad-ass beauty worth risking life and limb for are all to be found on a hostile alien world of mystery.

Sidney Hallmeyer and Will Carrist are having a smoke, drinking coffee and waiting to die.  The heat shielding on their ship just isn’t strong enough, and they’re going to burn up just like the previous two missions sent to research magnetic fields on Mercury and emanating from the sun.  Just as they’re about to shut off their life support and cooling systems, Sid and Will receive an SOS through the solar static coming from a hitherto unknown planet Vulcan.

Doctor Roberto Zondat, a notorious criminal who had to flee earth after hypnotizing several millionaires to write him into their wills then commit suicide, has holed up on the tiny fiery world of Vulcan.  Zondat intends to establish an empire in the hollowed out magma chambers with the help of enslaved natives.  Edith Dupre, a space-racer who had gone missing a few months before and been stranded on Vulcan ever since, managed to escape the grubby mitts of Zondat and his henchmen to put out the call for help.

There are a lot of cool things going on in this story.  The setting is striking: the night-side of Vulcan has a habitable atmosphere, but the world is so small that in every direction is a glimpse of hell as solar flares burst all around the world.  Working on the assumption that magnetic fields affect the nervous system, the intense magnetic forces on Vulcan and coming from the Sun have set the non-natives on edge; all of the humans begin suffering from intense paranoia and gradually spiral downward the longer they stay there.  Even though Zondat’s plan is to use the magnetic fields to amplify his telepathic control ray, he’s pretty much a wreck too.  The heroes’ daring escape relies on solving the musical mystery of why the Baimers – Vulcan’s native inhabitants – aren’t driven mad by solar storms.

One of the main things I want to talk about in regards to this story is Edith.  A lot of those who would denigrate the pulps will often do so by complaining about how the women in these stories are all just damsel in distress, pretty trophies for the heroes to receive as their prize.  These stories have idealized heroes and idealized women, sure, but what is that ideal?  She can’t just have a pretty face; she has to have substance and appeal; she has to be the sort of woman a man would risk his life for.  The sort of woman that pulp heroes are seen with are rarely without agency; often they are smart and accomplished individuals who are almost as tough as the men.  It is that almost where the appeal comes from.  These are certainly not weak, defenseless or incapable ‘damsels’, but they still need the man.

So about this Edith Dupre:

“[she was the]flaxen-haired heiress to the Dupre millions, the sleekest, boldest slip of a girl who ever poured her reputation down the drain because she hated conventions and wanted to wear the cover-alls of a space-pilot.

She was tough and rough, and she could use the language of a man with the same blunt honesty and could use a Hampton gun.  She was known the length and breadth of the system, this girl!  She was the only woman pilot entered into the Nine Planet Spaceship Race, and she was leading all competitors by a few million miles when she was reported missing, ship and all.”

Joke all you will about the one woman pilot getting lost; Dupre is no helpless damsel.  In fact, when Sid and Will first find her, Dupre puts on the same cocky brave face as Leia during her rescue.  She and Sid even go through the “Kinda Short for a Stormtrooper”/”Excuse me, your worship!” routine.

“Are you two the rescue party?  If so, and ipso facto, we’d better clear ether before the rest of the big bad wolf’s whelps take it into their heads to huff and puff.”

She flung back her flaxen hair, fiddled around with it until it was snugged behind her ears.  She dusted her hands, dusted off her corduroy breeches, and dusted off her hands again, then shakily stood erect.

I just stared at her.

“Listen,” she said, her eyes narrowing, “I’ve been shadow-boxing with that same look you’ve got in your eyes ever since I got here six months ago.  Said expression emanating from Dr. Roberto Zondato – only I guess yours is more respectful – I hope.”

“Listen,” I said in the same tone, “you’re just an item of curiosity as far as I’m concerned, and I was just staring at you because I didn’t think a toughie like you’ve got the reputation for being would have to keep anyone at arm’s length.  I’ve heard that men look at you and decide to stick by their wives.  I’ve heard that you walk into a bar and nobody even knows there’s a woman in the room.  I’ve heard-”

“You’ve heard, you’ve heard, you’ve heard,” she mimicked, but beneath the smudge and grime of her sweating face a flood of dull red showed.  She put her hands on her trim hips – hands that were plainly scratched and had dried blood on them.  She said grimly, “I don’t propose to stand here and toss arguments back and forth.  What am I supposed to do now, rescue you?”

Part of what made Leia so beloved was her tough can-do attitude in the face of overwhelming danger; she was capable, but she did still need a rescue even if she was too proud to admit it.  And said rescue only worked because she was able to do her part.  It’s important to remember that cocky action tough girls were nothing new in science fiction; Leia was hardly even groundbreaking in this respect.

We also have to remember that the pulps were in the act of weaving modern myth, and therefore the characters -both the men and the women- must be elevated to mythical levels. In this, Ross Rocklynne does not fail:

I was Orpheus, I thought to myself; Orpheus, who had gone into Hades and with music had charmed all nature; had rescued his wife Eurydice and started for the upper world.  But I would not look back into Hades as Orpheus had done, so losing his wife and his life both.

For the story to work, Edith Dupre MUST be a woman worth travelling to the both metaphorical and literal hell of the fire world Vulcan and back again for.

Women as a class may suffer from the Worf Effect in the pulps.  To show just how truly perilous the situation is, the tough kick-ass woman who can take care of herself finds herself in a spot where she can’t get out of it with help.  But nowhere yet have I seen any consistent portrayal of women as weak or helpless in the pulps.

One side note I want to touch on: this is the second story I’ve read from this period to feature “Hampton” guns.  My first encounter with them was in Leigh Brackett’s 1944 story Shadow Over Mars.  My google-fu may be incredibly weak, but I can’t find anything on Hampton ray guns.  I’ll be keeping an eye out for their appearance in stories by other authors; if anyone has any info on them, please feel free to share!

Want new science fiction with retro pulp sensibilities, action, adventure and heroics from here to Neptune?  Cirsova wants to give it to you!  Pre-order the magazine being called “a godsend for fans who’ve almost given up on contemporary SF.”